This was a really long and tough and wonderful hike—up the Col du Tsaté, a tiresome scenic walk, then down the other side through lots of wildflowers to the Moiry valley... then uphill another 4km and 400m to the Cabane Moiry for the night.

And along the way I fell off the path (it’s always on downhills and on slippery sloping flat rocks that look ok-ish) and banged up my right leg. Well, technically I fell on the path, and the left side of my belly took the brunt of my fall, but more on that later.

Leaving La Sage, it was cool and pleasant, shady and a straightforward uphill walk, with the views getting more and more expansive.

As we got above treeline around 2000m elevation... this being Switzerland, the cows came out, and we got higher and higher. A couple stopped and we chatted... Steve and Suzanne were from Juneau and she had just retired. We mentioned that we were staying at the Cabin Moiry and they were disappointed they weren’t... so Chris said “Let’s just book it” and they were amazed we had data service. There was availability on the not-quite-mobile-optimized website, and we got as far as entering the credit card until we were thwarted by Verified by Visa. Sigh. There’s got to be some equivalent word to “Kafkaesque” to describe the accumulative dysfunction of modern technology. They decided they’d just try their luck.

The cow “band” doesn’t extend all that high, maybe from treeline to 2300m or less as the grass gets more sparse and the terrain more rocky... and that’s really where the wildflowers come out. The trail stuck to the sunny south-facing slopes, and if you looked closely in the scree there were lots of wildflowers, many wildly out-of-season but still blooming, or perhaps blooming again as a second springtime. This summer has been very hot and dry; perhaps the plants were very confused what season it was. 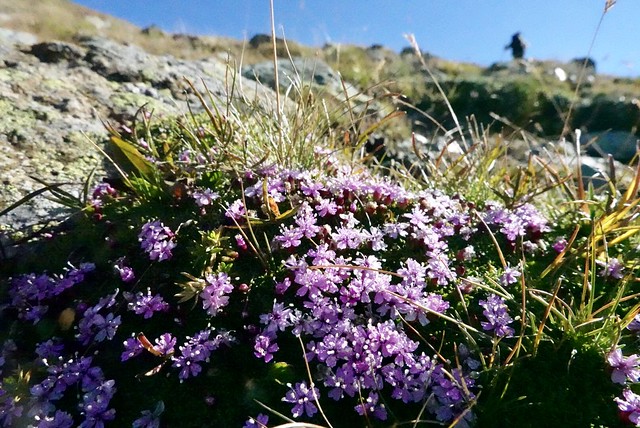 After a series of little bowls, the steady uphill trail got a lot rockier and steeper towards the pass. But it wasn’t too long of a haul, and by noon we were enjoying lunch on the Col du Tsaté at 2868m (9400 ft).

We stopped for a good long while. This is a long hike, it’s cool but sunny, and we didn’t want to wear ourselves out.

After that long extended break, we headed back down the other side. This slope was even more scenic and had a lot of wildflowers as well almost all the way down. It was fun to figure out what we’d already seen and what we hadn’t. 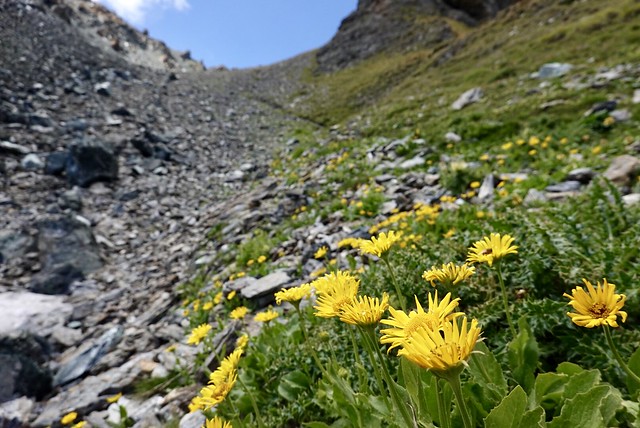 At a little tarn, we found four way junction with only three signposts. Uh, which way is the parking lot? We couldn’t see it, the guidebook says “Just go straight” but there is no straight. Puttering around a bit we found it, a zigzag down a moderate slope to the parking lot... with a buvette hopefully selling a nice cold Coke, the taste that refreshes.

But a few hundred meters from the parking lot, Craig and I were chatting, and I wasn’t quite paying attention on the narrow trail... put my left foot on this downhill-sloping rock with some grass on it, and whooops my left foot and leg slipped off the trail. I landed on my left belly and inside of the right knee and right forearm, ker-thunk, it felt a bit like some hard unexpected rugby tackle and I just laid there wondering “OK, what’s broken?”

Craig was behind me and watched the whole thing and asked me if I was OK. Sure I was, and mentally asked myself what day it was and self-answered correctly that it was Wednesday. Then I said “hm, anything hurt” and my knee felt dinged up but not painful, so I stood up and declared myself fit enough to walk on down to the parking lot at least.

We caught up with Chris, and checked out the walk up to the cabin, which we could see far above on a rocky ridge to the left or east of the glacier. And there were lots of switchbacks too, ugh. 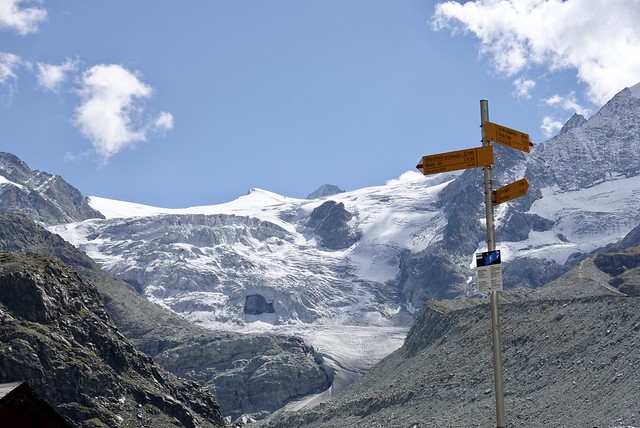 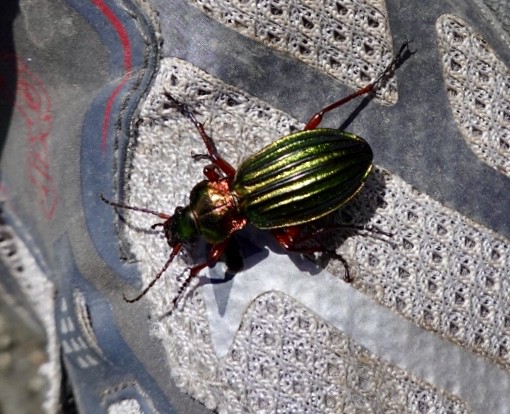 Jewel beetle on my shoe

As we got closer to the cabin, it slid from view over the crest... and we were tired, real tired. I for one was not thrilled with the idea of an asymptotically receding destination that keeps on getting further away the closer you get to it. It was one of those walks.

Finally, the cabin came into view; I got there at 3:25 and was relieved, and checked in. Chris and Craig were taking their time and arrived 30 minutes later. 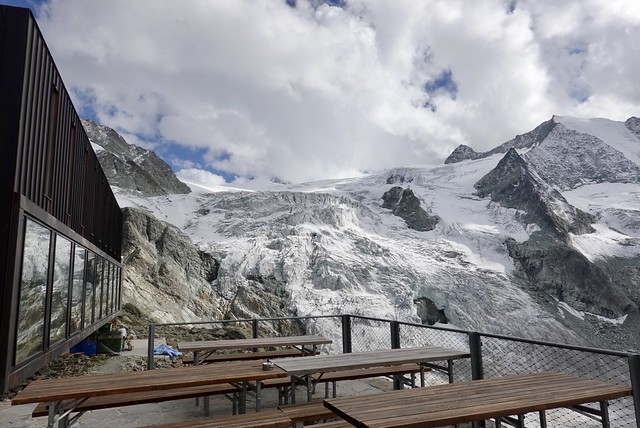 Nice terrace for a pause

Steve and Suzanne from Juneau were there, and were really happy they had got a bunk there rather than staying down valley. The cabin had draft beer (!), a yummy blonde, and of course I had the 5dl large size. It’s only half a liter right? The Juneaunians had run into a localish couple on a day trip that decided to take a day off and enjoy the sunny weather and visit the glacier, and the locals booked the room with their excellent data service. The locals also brought some yummy crackers and salmon that they shared with us all after Craig and Chris arrived.

It was sunny and we all were getting happy, and ordered up another delicious beer, yay. It was the toughest day yet, and we were all glad it was done. About 5pm I went inside to get my jacket and hang out in the dining room; it was getting breezy and cloudy out, and then I started shivering a lot. Guess I should’ve changed out of my wet gear, but it was pretty dried out by now.

I went upstairs to the bunkroom (we had a room for four, but only our three bunks were taken), changed into dry clothes and my down jacket, and started really shivering, brrrrrrrr... so I got under the blanket in my down jacket and really got cold. Worse yet my knee decided to go from 2 on the pain meter to 5, then to 7, then to 8. I was lucid and with it, but man, I haven’t felt this awful in many years... and knew it was some type of shock. I gulped two naproxen around 5:30 and that helped bring my knee pain down to a 6, and I wondered if there was something else going on. Did I burst some organ or have some weird internal bleeding? Chris and Craig looked at my flanks and didn’t see any bruising. Was this dehydration? Possibly as I’d drunk only 2 1/2 liters... and two beers... all day. That’s probably more likely.

My knee was a definite problem though, so Chris emptied out a drybag and filled it with snow from next to the cabin. That brought down the swelling and made it feel considerably better.

But the chills went on and on and got worse. I gulped down a couple liters of water, bit the pillow, and then took 500mg of Tylenol at 6pm. The acetaminophen worked wonders, and just 15 minutes later I felt I was in pain but not particularly hurting. Now it’s just time for the shivers to subside.

The boys left me upstairs while they went for dinner, checking up on my every ten minutes or so, and putting nuts and candy bars within reach. Thanks guys, I’ll take chocolate anytime for dinner. They came back around 7:15 just as the chills were finally subsiding, and were pretty worried about me, and we made plans.

Craig was pretty worked over by the hike, and with the weather being iffy tomorrow we decided we’d walk down and catch the 9am bus down valley, then a connecting bus to our hotel in Zinal. I was just worried that I’d make it downhill in time for the bus, with my knee all gimpy. With all the water I’d drunk I’d painfully hobbled over to the toilet down the hall a couple of times already, and would do that again six times during the night, or maybe seven; I lost count.

Whatever I’d done it was time for some rest. We’ll see exactly what that means. I’m not convinced it’s the knee, more like a bruised muscle if that’s possible. All I know is that I need to keep off of it for a day or three and see how it gets better, or it doesn’t.