Feeling much better this morning, even though I didn’t sleep much last night and didn’t have anything to eat but nuts and chocolate bars and at least four liters of water (which meant I hobbled over to the toilet about once an hour, ugh).

Chris and Craig reported that dinner was just awful, horrible gray ugliness. I asked them later in the day to put it down for the record, and here’s how they described it:

But the morning views were nice. Here’s a picture of the glacier around sunrise. 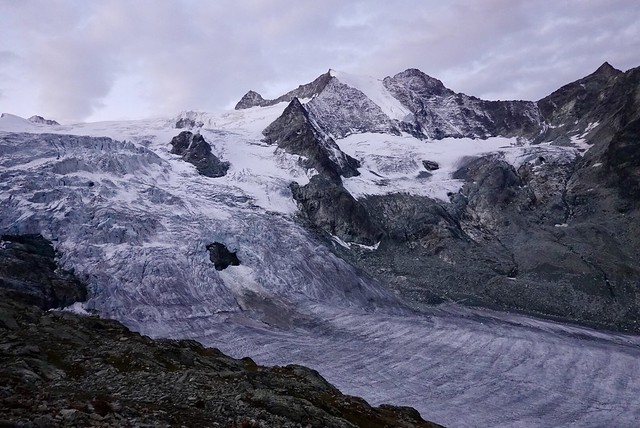 And coffee made things feel better, a lot better. 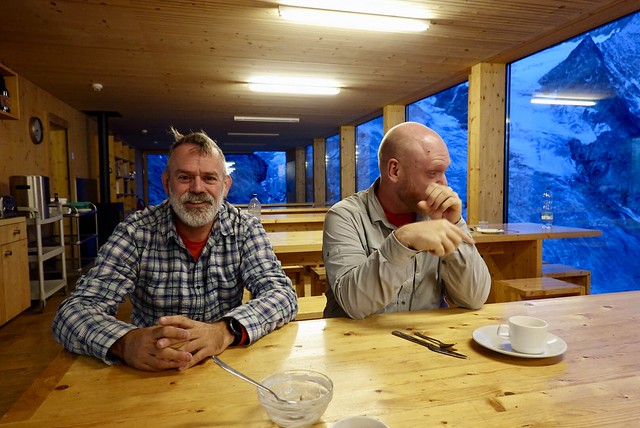 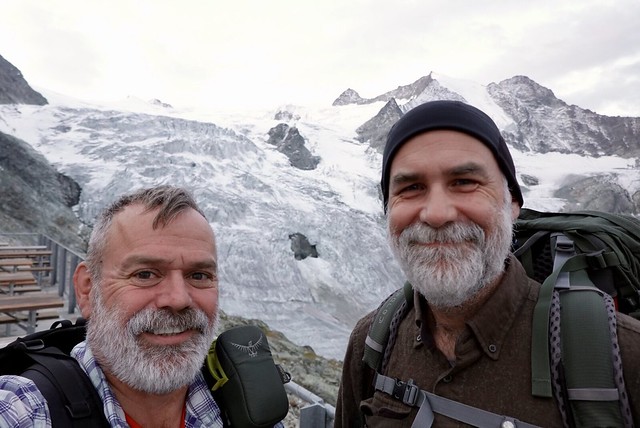 Dudes at some glacier 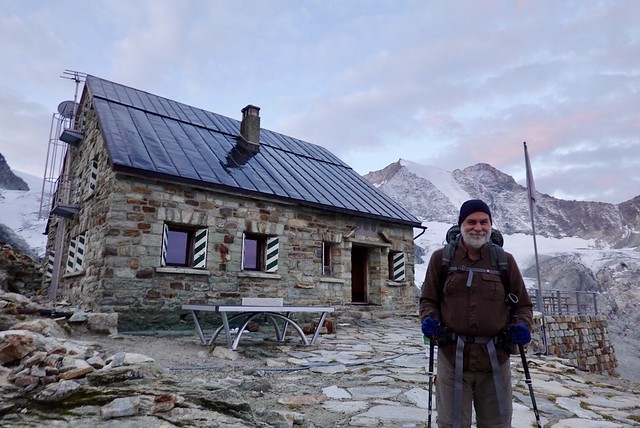 Leaving behind the cabin

Leaving the cabin, I was real worried that my knee wouldn’t survive the 4km walk and 400m descent down to the bus stop, and I’d be hobbling down the last, oh, hour. Turns out everything was fine, the knee didn’t pop out and just felt slightly painful; I’d rate it a 2 out of 10. It wasn’t even really the knee that hurt, but the muscle just a couple of inches above the kneecap. 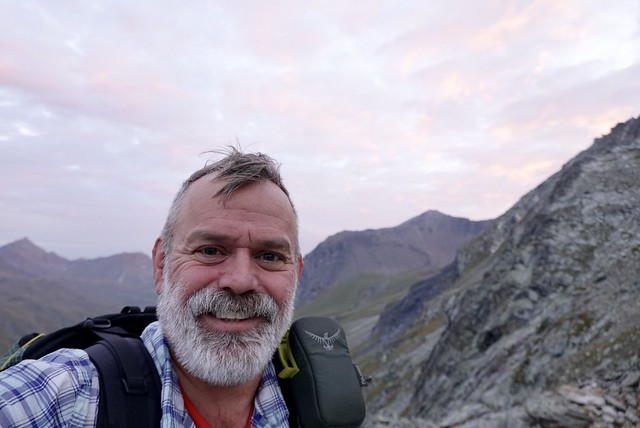 The views down were just as impressive as when we came up yesterday, a pair of berms that marked the sides of where the glacier was once, maybe 40 or 100 years ago, and a little valley where pinkish snow still lingered. 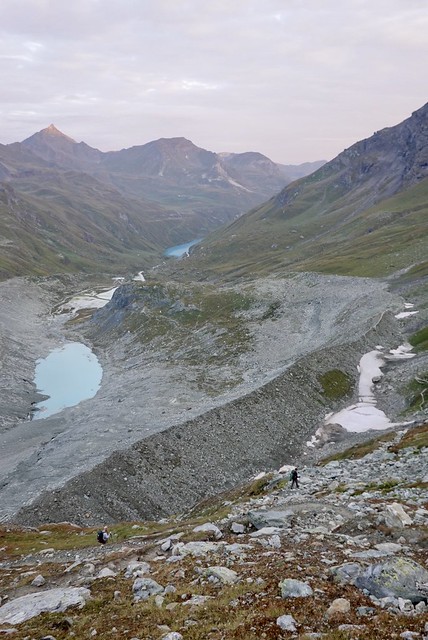 Down the sides of the retreating glacier 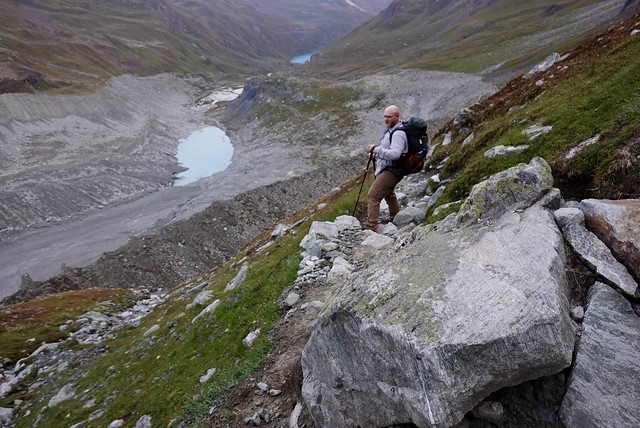 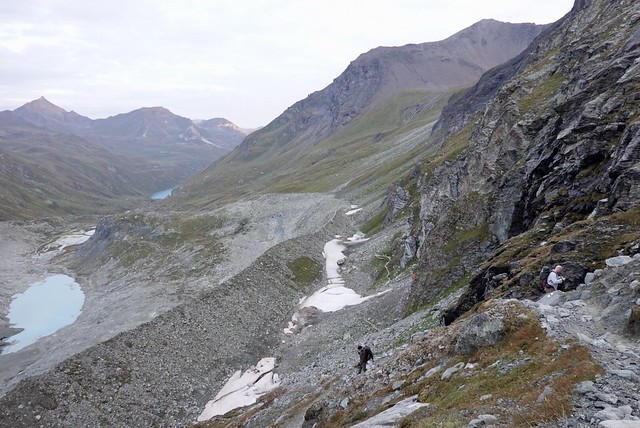 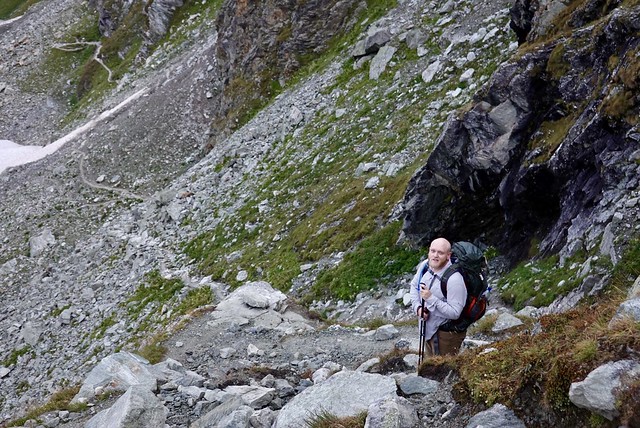 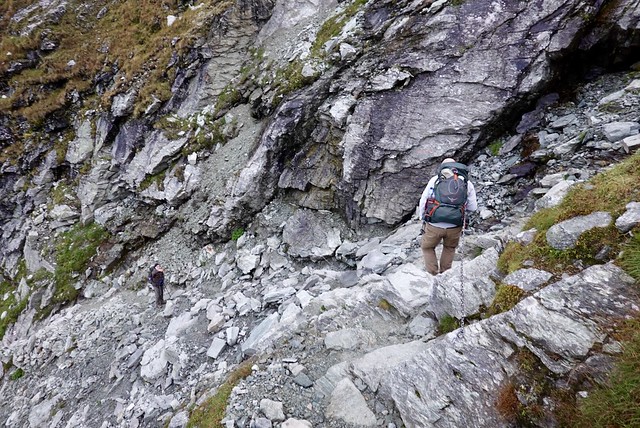 There were a few views back too, towards the retreating tongue of the glacier, and the cloudiness made for better views too. Nothing like staring at a glacier in full sunlight to give you snow blindness. 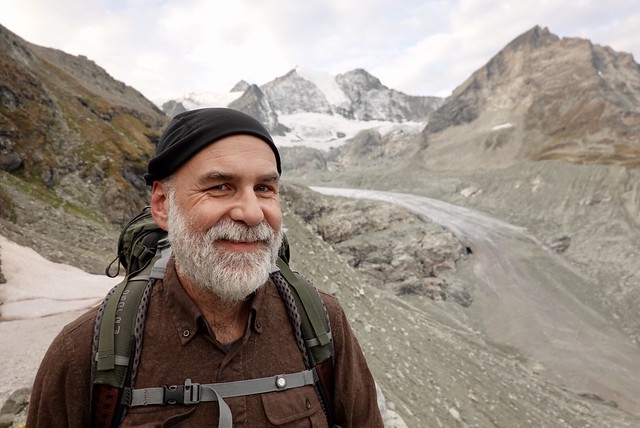 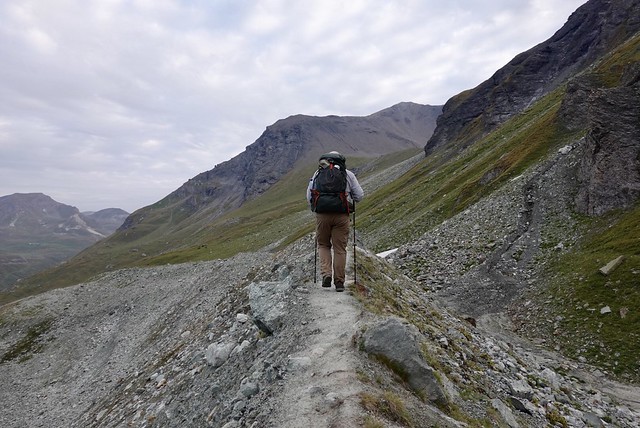 Along the berm edge

One thing I was worried about, though, was getting super-chilled and getting the shivers yet again. I didn’t want another repeat of last night (was it traumatic shock, or something like dehydration? must look up what types of shock there are, since Craig mentioned there are several types), so I bundled up with my wool long sleeved shirt and silk leggings that work real well with the fur on my legs. I didn’t freeze; if anything I was a bit too warm. 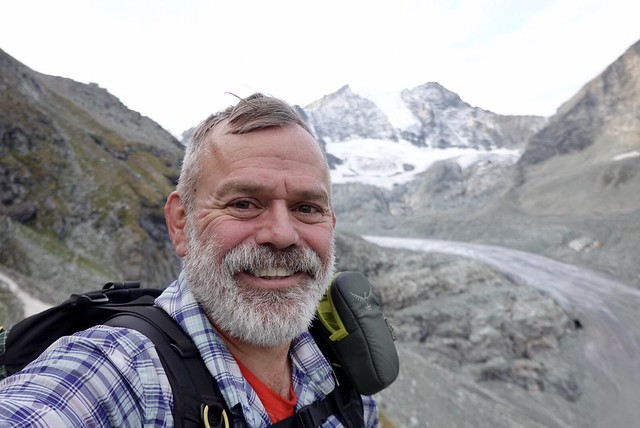 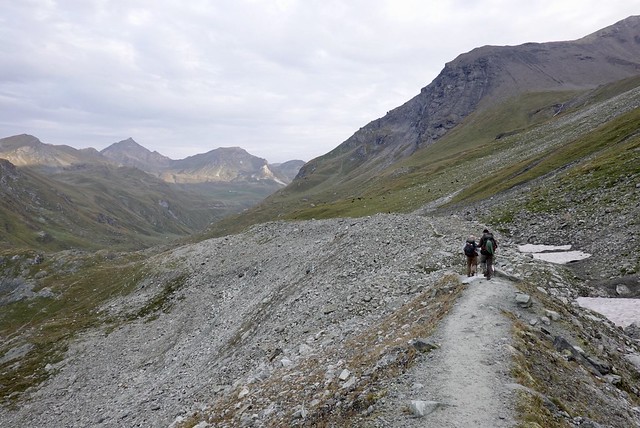 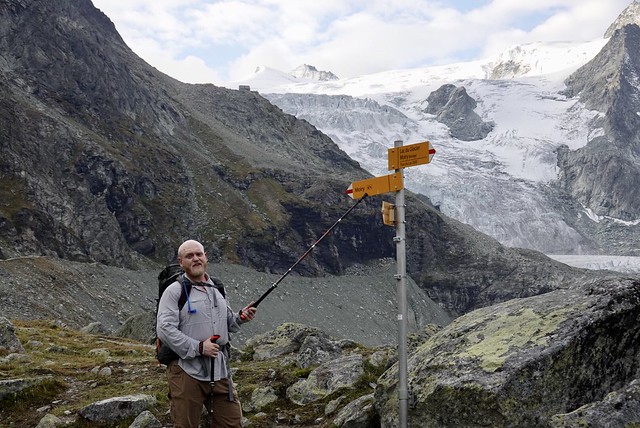 We made it down with a good 45 minutes to spare before the bus came, and just lazed around and took pictures of the pretty blue lake (actually a silt catchment basin for the reservoir below us, and not natural at all). 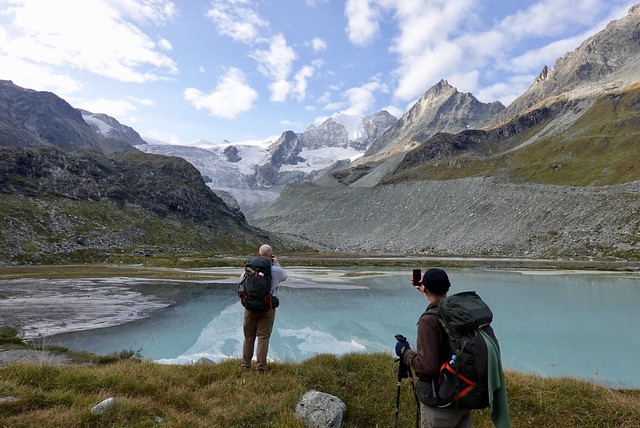 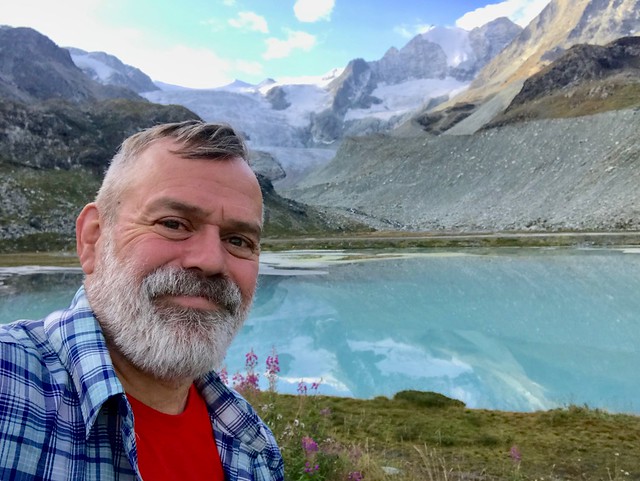 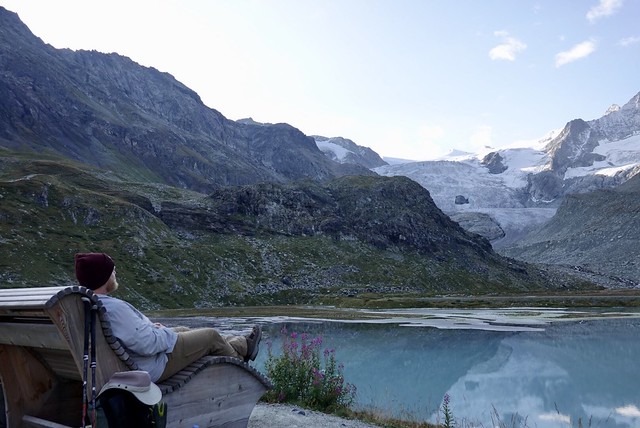 Soaking in the view

And, ever efficiently, the bus came and took us down the valley to Grimnetz... and the Spaniard we saw days ago got on the bus. He had stayed down in a Grimnetz hostel, and was also heading to Zinal to start his hike midday up and over. We chatted awhile, his name was Fernando and he’s been hiking since Chamonix like us. 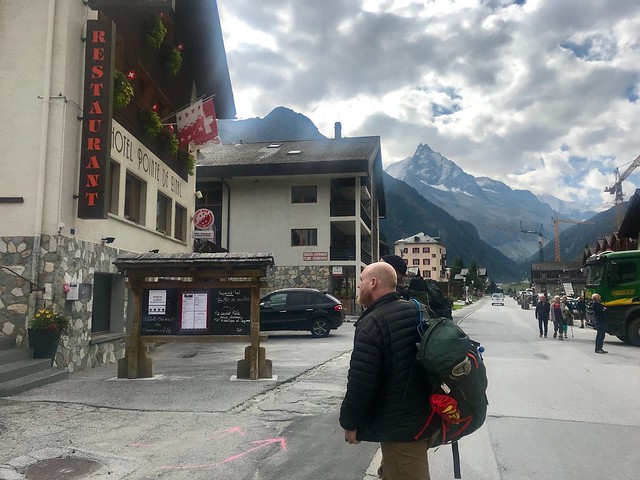 Zinal was a pleasant little town, not too sleepy and not too big, and we enjoyed walking around and looking at the threatening weather and both Craig and I were happy for a rest day. Plus the room and hotel were great; we really enjoyed the luxury. 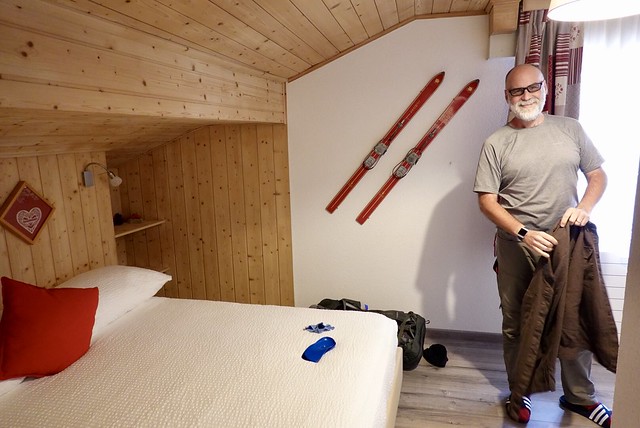 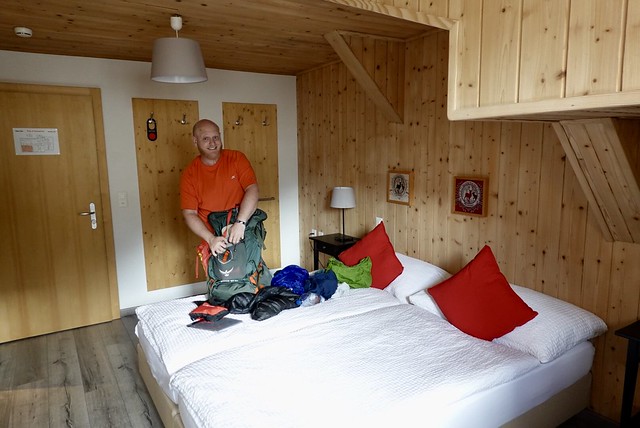 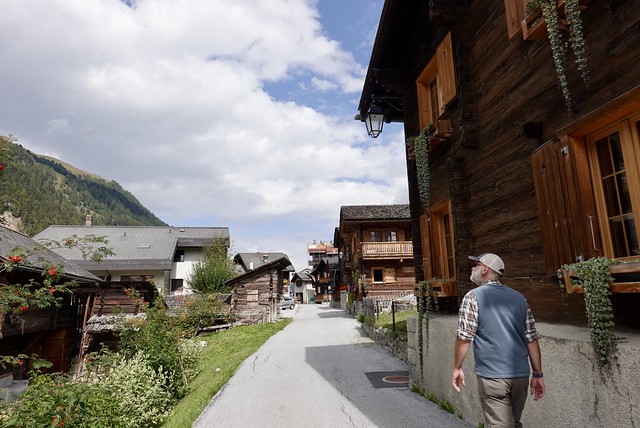 I had an itch for something different for lunch, so we found a creperie. Nom nom nom. 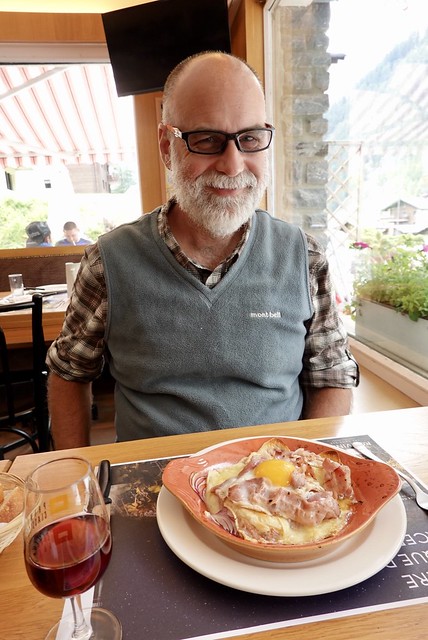 And we found marmot beer (no, not made from marmots) which sadly wasn’t very good. 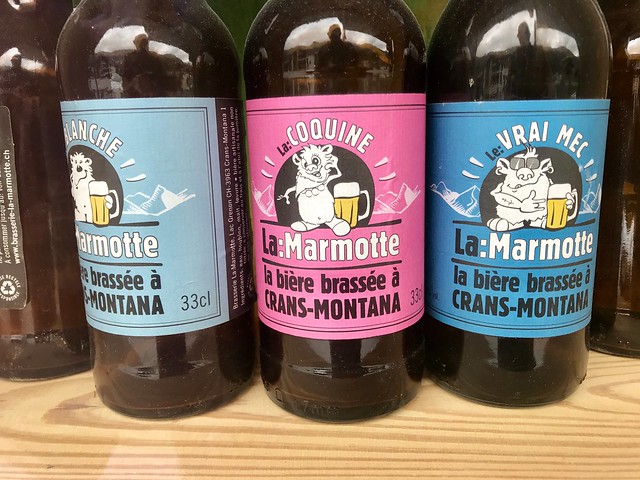 Ah well. After a bit of a nap in the late afternoon, we wandered around for a little bit, and ran into Fernando the Spaniard walking to the bus stop across the street from the hotel. He had turned around from his hike up and over the ridge; the clouds had closed in and it was drizzling snow and rain and he just wasn’t up for yet another six hour march through the fog and cold. Fernando was up for some warmer surroundings, so he bid us adios as he got on the bus to Lausanne where he has family.

As for us, we stayed in and had a wonderful dinner and rested yet again. Ahhhhh rest.