Continuing on my day in Hampi with the royal compound and Vittala temple.

Inside the royal compound, the Lotus Mahal is inside the women’s quarters, encircled by a 5 meter high rock wall with guard towers; a very pretty building designed as a daytime resting pavilion for hot days.

Venkatesh pointed out the peculiar plumbing, and the pipe holes at the top of each ‘room’, which would distribute water to hanging linen sheets, cooling and humdifying the pavilion as the water evaporated in the hot dry air. I’d call it a swamp cooler. 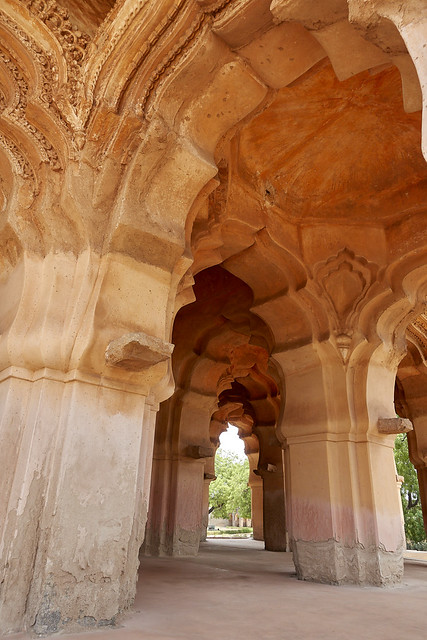 Beyond the women’s area were the elephant stables, 11 large stone rooms for the royal elephants, and an Islamic style building for their keepers.

I liked the little “human” slots so the elephant keepers could scoot from pen to pen.

Definitely one of the most intricately carved temples; this was a royals-only temple and was really ornate.

Back into the actual Royal administrative compound, which is mostly flat, though there were some fun things, like an underground negotiation room that blindfolded negotiators were led to, and a wonderful step well out back. The aquaduct that filled the step well was made from long granite chutes, it’s somewhat incredible to think that these huge blocks of granite were used as irrigation plumbing.

Venkatesh also explained a bit how elephants were used as heavy equipment to build the 4 and 5 meter tall walls, as once the walls got high enough placing the large blocks would be difficult. Once the lower section was placed, the builders would just raise up the ground with dirt and then use the elephants to push and pull the boulders up the slopes and onto the walls. It sounds interesting, but complicated. 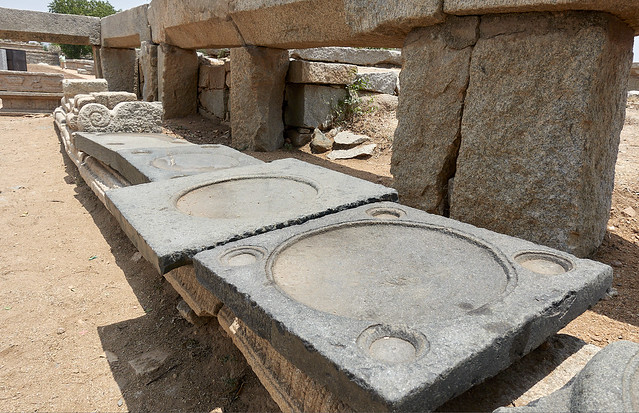 Dinner plates for the guards

The Queens Bath is more like the Queens Open Air Swimming Pool. I liked it, and again Venkatesh explained that the large trenches just outside were to let the sediment from the water to settle out, then the pool was filled with the topmost clean clear water. 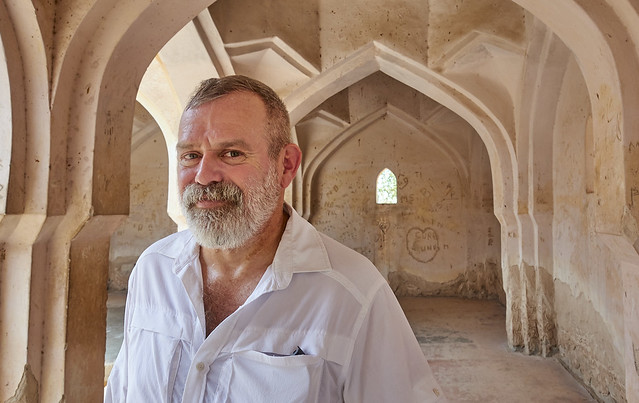 Lunch was a thali plate at Tamarind Tree. Tasty and filling.

The highlight. We walked the 1km from the drop off spot. I had drunk 4 liters of water at this point and was feeling good.

This is the highlight of Hampi, and I couldn’t miss it! It’s also printed on the 10 rupee note.

The chariot faces a building with musical columns that you can tap on to make music. Tourists aren’t allowed to do that anymore, though, and those what tried were quickly whistled down by the security guards.

Along the edge of the building were channels to direct rainwater into drip channels, so during a rain the building itself becomes a fountain. That was really interesting, something I had not seen before!

There was a temple to wander around, an old massive plumeria tree, and yet more pavilions, some showing unexpected influences like the Chinese-looking dog-lions. Every column and pillar was carved differently.

Around the other buildings

We wandered around the other buildings. Here are a few pictures.

Once done with the Vittala temple, Venkatesh took me out back, towards the river. It was getting late in the day, and we stopped by the gate leading to the royal compound a few km away, then down to the river to a reconstructed river temple. It was... lonely, atmospheric, pleasant. I wanted to look at the river, Venkatesh sweetly asked if I wanted him to pour water over my sweaty body (it would feel good and cooling, but no I don’t trust the river water), and then we sat and watched the crows and birds flutter around in the reeds. Venkatesh said he was happy that I came to experience his part of the world, and then cuddled up against me in that peculiarly close way that Indian men do. It was charming and I didn’t mind at all, I was feeling very mellow and peaceful.

We walked back to the rickshaw, stopping for one last glance at the wonderful Vittala temple, and I was done.

All in all it was a wonderful day! 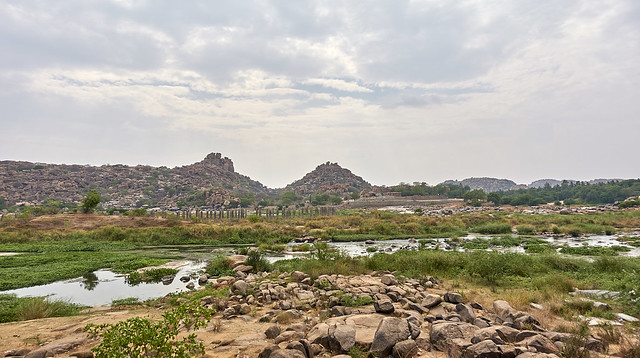