Yay. Yesterday I didn't do much--just a bit too out of sorts from the Hampi heat. I took the overnight train back to Bangalore, though I avoided the chaos of the central train station and hopped off at Malleshwaram and walked the leafy back streets to Julians, along with all the other locals who were out there getting their morning walk in. I napped and repacked, and then headed to lunch with Reshmi, having a pizza and a BBQ pineapple mojito at Smoke House Deli because I could.

For dinner, we had Chinese food! Well, more specifically Indo-Chinese food from Cheung's Chinese Corner. It was... curious, more like Chinese food with Mexican salsa or something. I really couldn't eat it, and was kinda pleased by that revelation, finally finding Indianish food that wasn't really palatable.

Friday came and we had plans. Big plans. First, go to the tailor for suit fitting at 11. Then drive west some 300km to Coorg province in the mountains for the weekend. Coorg is towards the coast, and the rain clouds come off the sea and dump over the mountains, making it lush and green and filled with coffee and spice plantations.

But first, before all of that, food. And food was supplied by one of those barren little restaurant nooks around the corner called "DOSE CORNER". What was there? Well, something called a "benne masala dosa", which with the coconut-mint chutney was just about perfect. Then after a brief stop at the tailor, we started the long drive west. 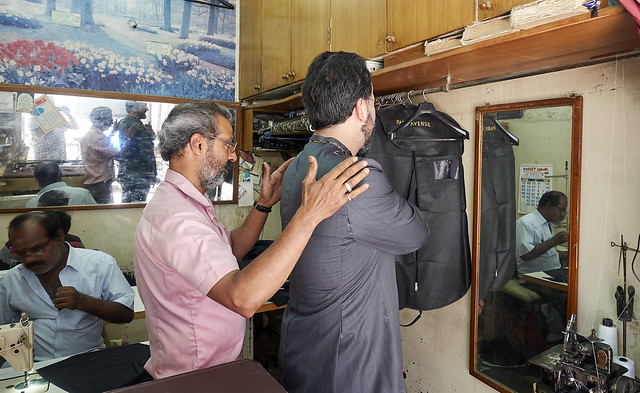 Julian gets his suit fitted

The roads out of Bangalore are about as slow as you think they are, with auto rickshaws and scooters and motorcycles and pedestrians and an occasional cow or dog darting about. They really aren't more crowded than, oh, central Seattle or Los Angeles or DC, except for the rickshaws and cows and dogs, but they just go on and on and on. It took us the better part of an hour to get from the Commercial St shopping area in central Bangalore out to the southwest end of the city, out where the overhead Metro train bridge ends, and even then it was slow going until several km past the outer ring road, just past where we turned off to the nonveg function last Sunday.

But then, somewhere out there, the road got really wide, and there were tollbooths (oooh, 20 or 40 rupees or something, about 70 cents US) and suddenly we were on a pretty divided motorway at 110km/h with oleanders in the center divider and those little Honda 125 scooters sputtering on the shoulder. We were in the back while Sabu dealt with all of that traffic, and we stopped for some lunch along the way. 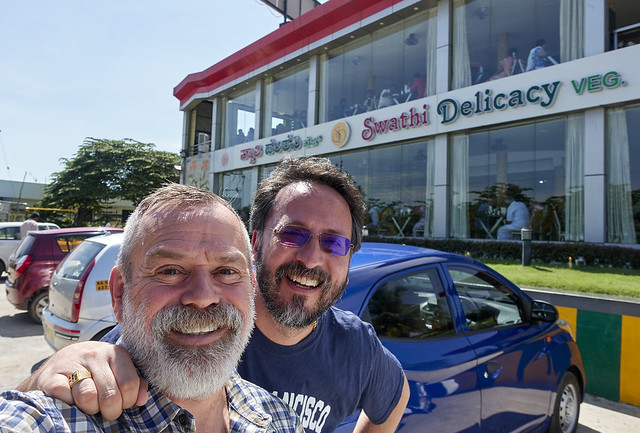 Swathi Delicacy on the motorway towards Mangalore

The motorway wasn't forever, though, and soon narrowed down to a decent two-lane road with sidewalks (must be an election soon!) and then we made the left turn off the Mangalore highway and towards Marikeri, where we were staying. Uh, now the roads were no-so-good. Those last 100km or so took forever, with lots of 20km zones through congested towns and lots of topes (I mean speed bumps) and big trucks that just couldn't be passed. As the road went up off the plains into the mountains, traffic got even slooooower, and frustrated drivers attempted very death-defying truck takeovers, turning the centerline into third lane of chicken with downhill drivers.

But then we were there, at the fancypants Taj resort. We had looked at a lot of places during the week, and decided to say screw it, it isn't that much money to stay in a 5 star resort (actually less per night than your typical Ramada Inn or La Quinta in exotic Tampa or San Jose or Austin). We arrived at the Taj and walked into the hilltop hotel an exceptionally stunning view out the lobby, just at the golden sunset hour with the dark clouds on the green hills. 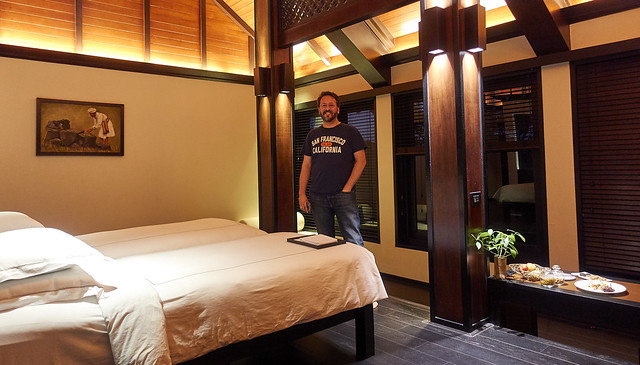 Well, it's a day to sleep in. Even though we told our driver to be at the hotel at 9am, Julian said "don't worry, he's on our schedule", and we didn't get out of the room until 9:30... trundling over to the breakfast buffet, which was most interesting.

Breakfast was filled with all sorts of oddities: hot dogs of bell pepper and tomato, banana and black chickpea curry, okra stuff, sweets, all very tasty and not at all what I think of as Indian food. My aversion to Indian food generally comes from my dislike of turmeric, which tastes far too burnt to me, kinda like chewing on a charcoal briquette or straight black Starbucks coffee. This didn't have any at all, mostly coconut and mint and tomato and clove and cardamom and all sorts of other spices that are more sweet and fragrant than bitter and harsh.

As we sat down in the middle of the large dining room, we assessed the crowd, which could be best summed up as aspirational Bangalore IT supervisors and middle managers and their families. Lots of parents flaunting their iPhone Xs and CanoNikon SLRs with huge lenses, kids with iPad minis, gold toe rings, middle-aged men in holiday-mode shorts, wives either in expensive looking saris or in Kim Kardashian mode. Julian and I were the only foreigners as far as we could tell, but we didn't feel out of place... except of course for my lowly iPhone 7.

We kept the poor driver waiting until 11am (not to worry, we are privileged people and drivers expect this) and then headed out for the day, an easy day of waterfalls and plantations and viewpoints. Most attractions are not close, and the roads are either OK or iffy, so we kept things close-in. First up was Abby Falls, where we paid 40 rupees to park then strolled down to a crowded viewing platform. Julian explained to me that Indians love visiting waterfalls, and yep, there was much selfie-love. It might be just a waterfall, but why not take 100 pictures of family and fashion in various permutations? Hat on, hat off, holding the baby, baby out of picture, high picture from the selfie stick, now with the fancypants camera, now funny, now pursing lips, now a whatever pose, now just the children. People were having fun, and I was amused.

Next up was another 10km/hour drive to the coffee and spice plantation. We had a nice 45 minute walk through the coffees and spices; I didn't realize there's a third type of coffee called 'liberica' (as opposed to 'arabica' and 'robusta'), and saw a few plants like cloves and cardamom that I'd not seen before. We finished with some coffees and bought some for homebrewing.

After that, it was just time to go to the Raja's Seat park, take some pictures of the countryside from the viewpoint... 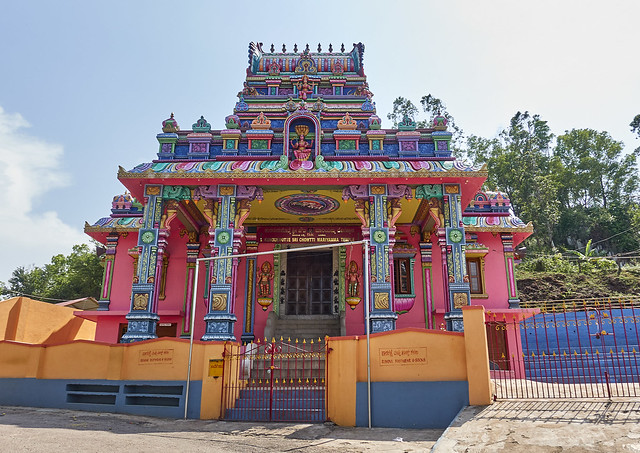 then we decided a beer and a nap was in order back at the hotel. With the state elections, it was a dry day, so we opened some Kingfishers in the room and stared out at the greenery. I showed Julian a bit about how I use my photo editing software, and we napped... becoming soooo lazy that we ordered room service, sadly it was pasta as they don't do pizza in the rooms (sniff).

Today is just a driving day, with more breakfast. I took a lot more pictures of the foods, and we made sure we got a seat on the terrace. 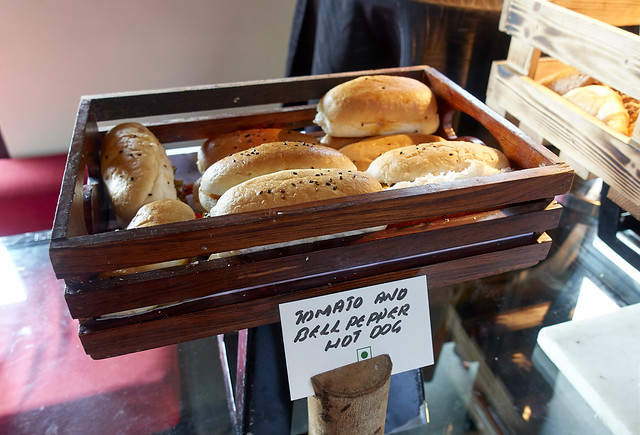 Then, ugh, at 11am we strapped ourselves in the Toyota for the 5 hour journey back to Bangalore. Not much to report, but we did stop at the restaurant we hit on the way out and Julian ordered a "My Darling" sundae, some garish tasty delight.

Back in Bangalore, we freshened up then went out to a bar. India is kinda weird with drinking, so going to a bar feels a bit subversive, especially as bars seem to be for men-only; I don't think Indian women would ever go to bars. We went to the White Horse near the Orion mall, a basement level bar that serves beers and snacky, and enjoyed the mantime. It was great fun.

Tomorrow, it's up early, then a flight to Delhi. I've really really enjoyed my time in Bangalore, and definitely would love to go back.