It was a fantastic day out in Hampi, wandering around the solid granite temples and marketplaces and elephant stables and much more, of a kingdom from long gone, set in a bouldery landscape. 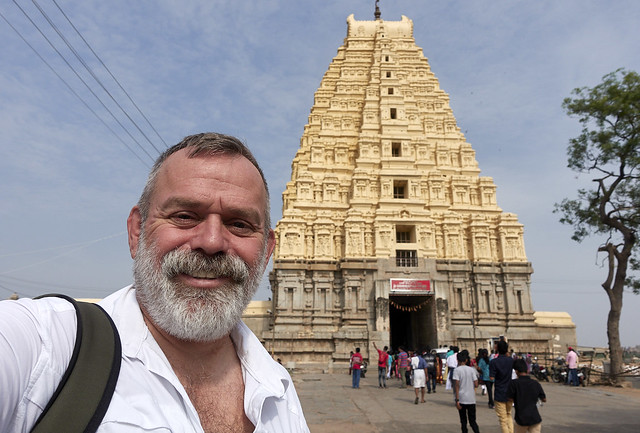 Figuring out how to best get to Hampi, though, was the first challenge, and we started that Sunday evening. It's easy to book a sleeper bus, 800 rupees, with flat seats, so that'll be the default plan... but can we do better? Let's see if we can navigate Indian railways. Sleeper berths available? No--and what an strange website. What's 1A, 2A, GEN? Julian empathized and explained all the odd codes. He called someone who's father works for the railways. Maybe get one of his quota? Maybe try for a taktal ticket? What's a taktal? Oh, tickets that go on sale the day before, so at 10am Monday Julian and his office mates had hovered over the keyboard, scoring an outbound ticket, sleeper 2A in carriage A1 berth 18, side upper. Fine.

Return trip was an equally amusing attempt to game the system. Maybe get one of the foreign ticket quota? Let's try registering a new account for me, so I can enter a non-India mobile mumber that'll show the FTQ. Only twenty minutes later I got a new account on that confusing website https://www.irctc.co.in/eticketing/loginHome.jsf. Two minutes later I finally got an email confirmation... and ten minutes later I finally got an text message on my US mobile number to get past the 'verify your account' screen. Yay. But no foreign ticket quota, boo, so we waited until 10:00 for Taktal, there are 20 2A (2nd class aircon) sleeper berths available, and yes, we scored one.

So... second class sleeper train from Bangalore SBC to Hosapete HPT and back, woot. And yay.

We caught an Uber to the main train station in Bangalore, SBC, and ooooooh so this is the India I thought I'd see; people and cars and motorbikes and rickshaws everywhere and busy and hot and dusty, though it was 9:30pm. We pushed our way through the crowds to platform 8, figured out where the carriage would be on the platform (newish LED signs), and waited for the train to pull in a bit late. Wow these trains are long, 400m long or more I'd say, but the signs were accurate and we found my bunk. 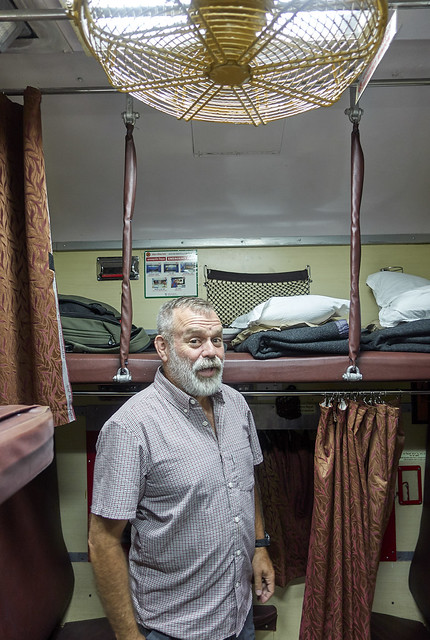 The bunk was comfy and it came with two sheets and a pillow; after spying how others had deployed their bedsheets and curtains I made a little cocoon and snuggled in for the night journey in the cool air conditioning. The train wasn't fast--it's a 20+ car diesel train after all--but the tracks to Hosapete were fairly smooth for most of the trip, better than most US railways, and I slept a solid 7 hours. When the sun came up around 6am, I scrambled down and looked out at the countryside, hot and dusty and scrubby, looking vaguely like west Texas.

The train pulled about half an hour late, around 8am, and I had been strategizing on how I’d find a driver or guide. With just rickshaws out front,there weren't any obvious car-and-driver, and no one approached me; I felt disappointedly un-exotic. The other four or five white people that got off the train (ie, tourists) had disappeared. Hm. I ducked back to the platform for the toilet in the reserved passenger waiting room, then when I came out some guy was there pushing a map of Hampi in my face telling me he could arrange for a half day or full day trip. I said how much and where’s the car or auto or whatnot; he said 3000 and the car would be out front very soon after he called his brother who was at home who would guide me, and then "I am the only guide agent here; guides have all gone due to the heat and there are no tourists". That's... nice? ... but then I thought his brother would probably take an hour to arrive so I gave him a pass, he seemed more like a sales agent than a guide.

I walked back out front, and one of the rickshaw drivers approached and said said he’d take me around all day for 1500. OK, I could handle the heat and a 12km ride... how about 900 rupees? He said 1000 and I said sure. Since there wasn’t any obvious guides around, I just decided to see if I'd pick one up at Hampi, and I took off with Kai. After a 20 minute detour for petrol (oddly he did not ask me to pay for a couple of liters of fuel) we were puttering over to Hampi and the first temple, Virupaksha.

Kai pulled up to the temple entrance and said “go over there and look around, I’m getting breakfast” so I wandered on over. Yep, still an active Hindu temple, but what does that mean? How do you behave? What is there to see? I took off my shoes and wandered around; finding a couple of pavilions, three bull statues, and followed a trickle of people to a nook with a keyhole upside-down view of the main 53 meter high temple building. Mmm, OK, my visit lasted 15 minutes, maybe I’d discover more with a guide, but where are they? There weren’t any out in the entrance or empty forecourt, or maybe they just didn’t notice me? So odd.

I put my shoes back on and a couple of kids with guidebooks started coming up to me, selling guidebooks. “This one is only 300 rupees”; I looked and it had “200 rupees printed on back and pointed to it; and of course he said “Yes, that is 200 rupees and 100 rupees commission."

Sigh. I didn’t buy the book and asked him where the tourist office was. He pointed over in a corner to an office with a hand printed sketchy sign that said “closed... for May” printed on a sheet of paper. The office was indeed closed but that sign, well, did one of the book touting kids put it up there? Hm. I turned away, walked away a few steps, then turned around again and said “How about 100 rupees?” The kid countered with 150 rupees and I bought it. Sure, I could afford $2.25 US to learn some mostly correct spellings of the places inside. He then said “Plus 50 commission”, though the book was already in my hand I said “Don’t push your luck”, and he did a head-bob and said “Thank you sir” and ran off.

Unexpectedly at that moment a small man, who had been observing my little transaction, approached me and said “I am Venkatesh, and I am an offical guide. Do you need a guide? Here are my rates”, reaching into his pocket and pulling out a laminated printout of his half day and full day rates of 1000 and 2000 rupees, along with his Karnataka state guide license. Well, you know, I have just one day, because I had to get back to my work in Bangalore, and he insisted two days minimum to see all Hampi wonders, but nah, really, I know that one day walking around in 40C/100F heat is enough, even if it is a dry heat. So I told him a half day would be good, and if he wasn't working out I'd go on my own. I actually wasn’t sure if I could handle the heat; it was hot and a touch humid, and I have bad memories of heat exhaustion hiking the gruesome 40km/24 mile Hat Creek Rim segment on the PCT a few years back. It made me dizzy and headachey and crampy and chilled and knocked me out for five days.

Anyways, Venkatesh said of course, he would be happy to guide me if only for a half day, and then the full day if I was feeling good. We agreed on a schedule, this temple and the royal palace area in morning, then lunch, then the Vittala temple in the afteroon. A full day, really, would be best, I agreed (what else was I to do), and he seemed happy and head bobbed and took my left arm in that peculiar Indian man way and suggested we go back in and look at the temple I had just come out of.

We entered, and walked around the inside temple, stopping at various things I'd overlooked, like the three bulls, each a separate incarnation of Shiva, then inside the first pavilion with an icon/deity in the back, which he touched, then blessed me with an Om-something chat, his fingers on my forehead and belly. We walked around back, past some mysterious chalk and another deity/icon, and out. Then down into a doorway to an underground shrine/icon, again the touching blessing, the walk around, and some explanations about erotic art above and which kings built which temple towers. I’m really not up on my Hindu stories and I’m sure the kings and all are interesting to some people, but I got lost in the historical weeds pretty quickly. Already I was thinking getting a guide was worth it, the sad guidebook was awfully dry.

Back out in front of the temple, I wanted a bit to eat, so found a street food vendor that looked acceptable (ie, clean, plus the local police were eating at the table so it must be cheap and filling), and indeed it was, more idli with chutneys. Kai the rickshaw driver had waited, and introduced me to his ‘brother’ who would take me around the rest of the day. Uh, OK... but I didn’t get the feeling I was being scammed, which maybe meant I was? Nah, just go with the flow, they will look out for me. And yes they did. 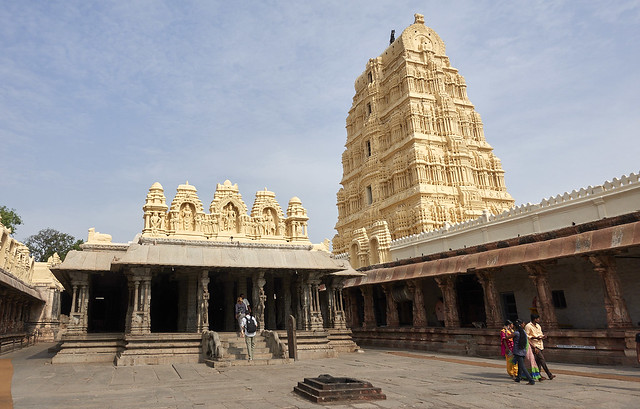 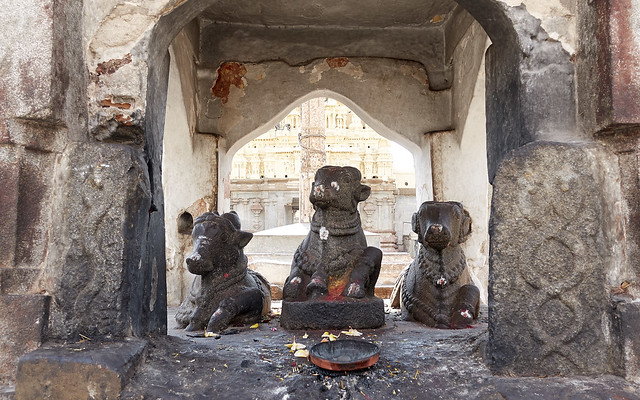 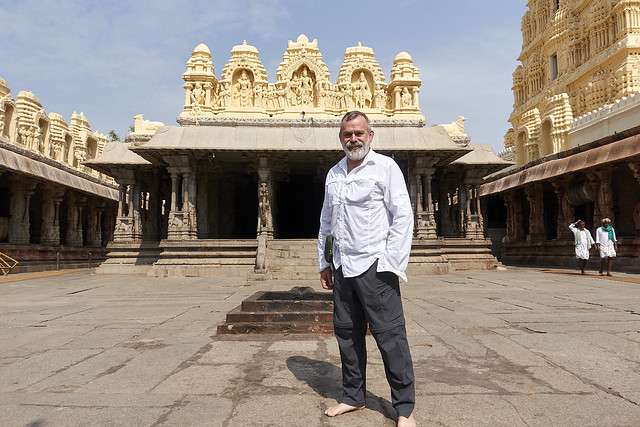 Barefoot in the temple 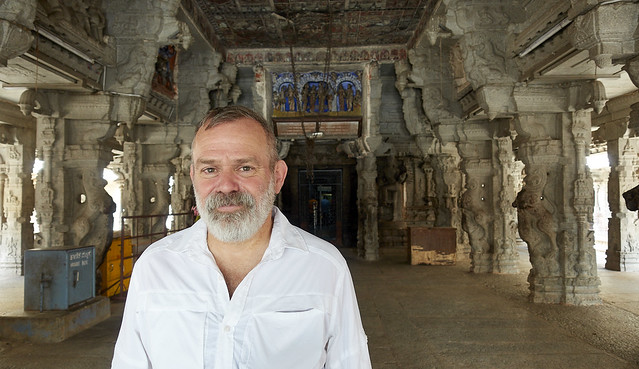 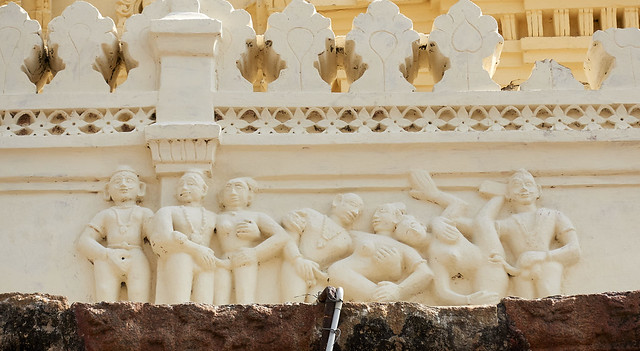 Next up was Ganesha temple, on the hillside above. There’s a big monolithic Ganesha statue, carved out of a single piece of granite (probably was a truck-sized boulder), and a good view over the surrounding countryside and bazaar below. The landscape is very similar to parts of San Diego county, or Joshua Tree, a jumble of granite boulders and hills. All of the structures are built with this granite stone, it’s pretty fantastic.

I got another blessing at the big Ganesh, with my guide touching Ganesha’s belly, then my forehead and belly and junk (uhhh?), and he explained how ‘invaders’ chopped off his belly and trunk. But it is still Ganesh. 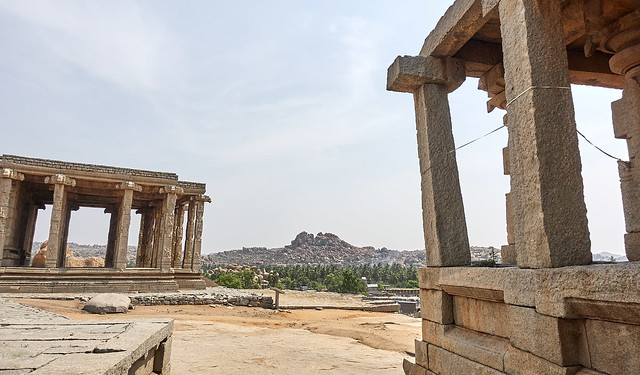 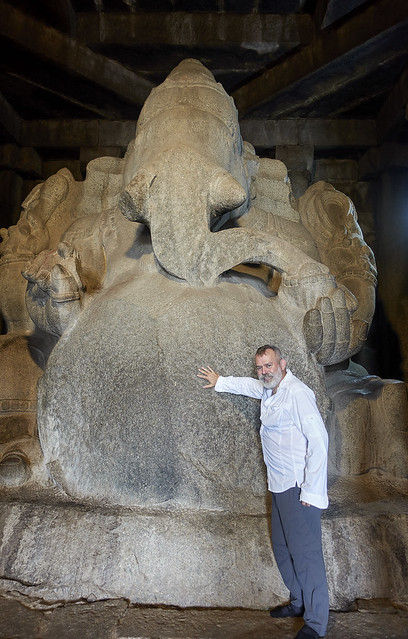 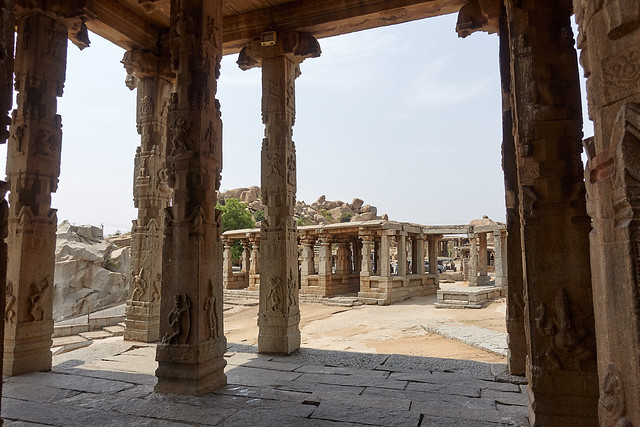 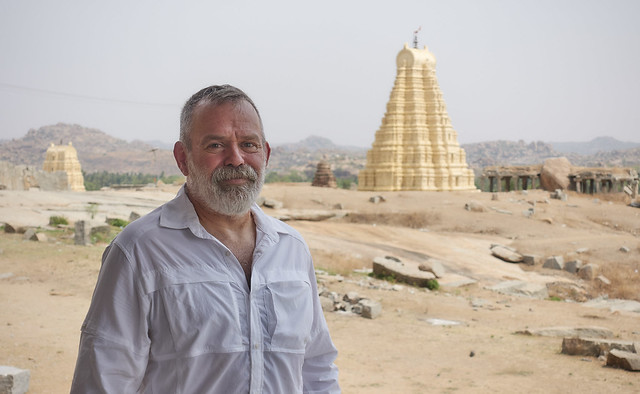 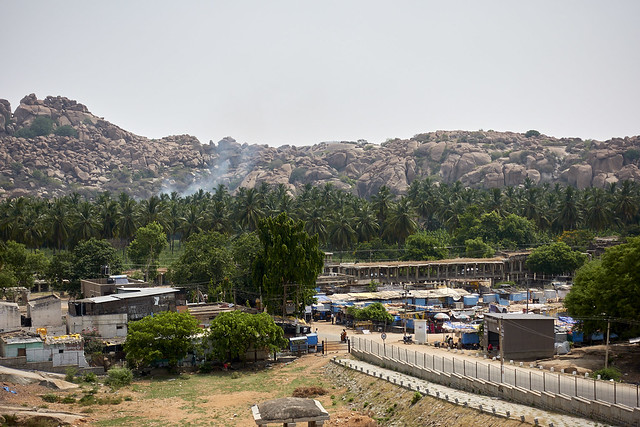 On the other side of the hill is a smaller Ganesh known as the Mustard Seed Ganesha, because he appears to be squeezing a tiny mustard seed in his left hand between his thumb and index finger. Around back, Venkatesh said, you can see a carving of Ganesha’s mother, Parvati, clinging to his back.

And then as we left smaller Ganesha, we encountered something I’d seen time and time again, young Indian men preening in casual street clothes and big sunglasses for an professionally amateur photoshoot. At this point I’d guess that these are pictures that will be passed around to family and to families of future brides. Everything seems to revolve around weddings. 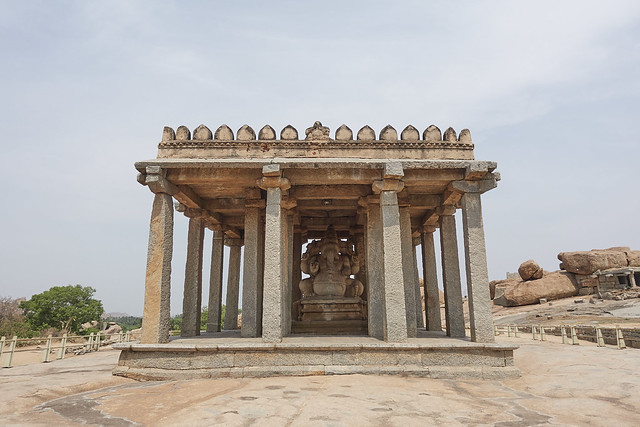 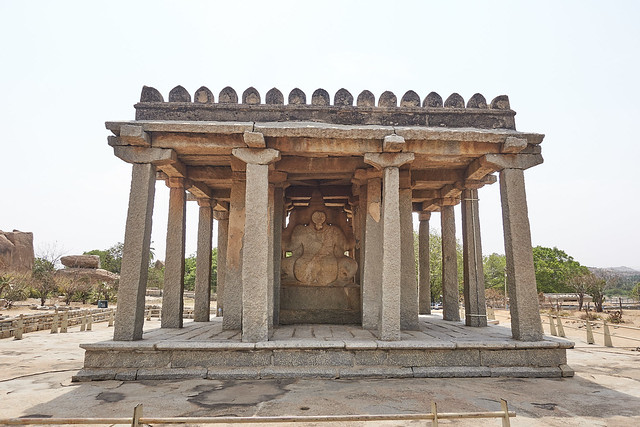 Ganesh's mother, Parvati, on his back 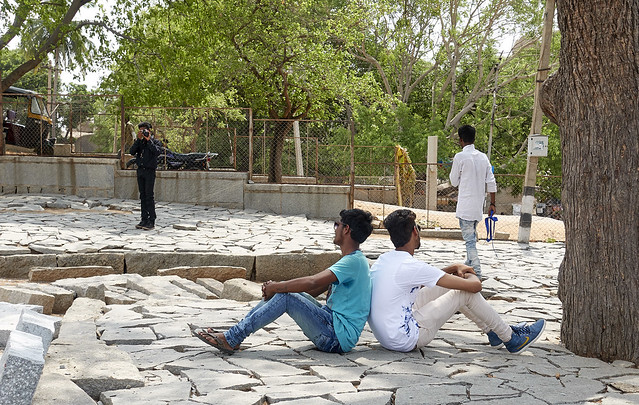 India's Next Top Models!!! (at the temple)

This is where my brain started getting full already of names and deities and incarnations and dates and kings. I started taking pictures of the signs so at least I could remember what they were. 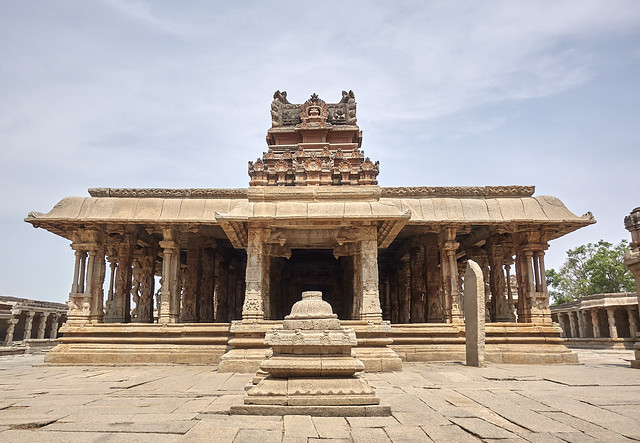 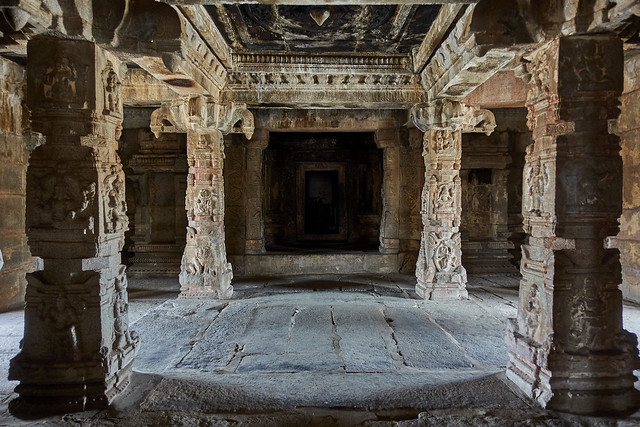 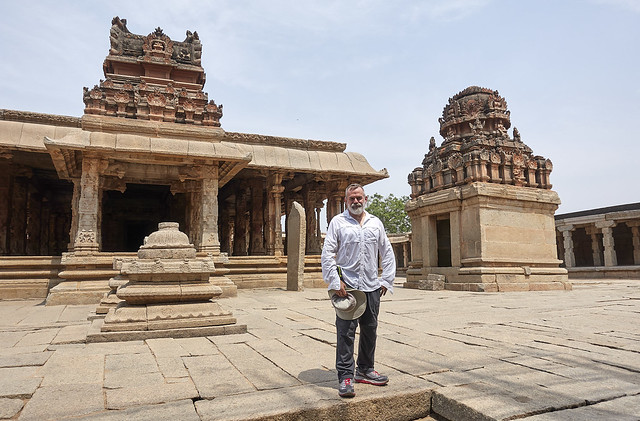 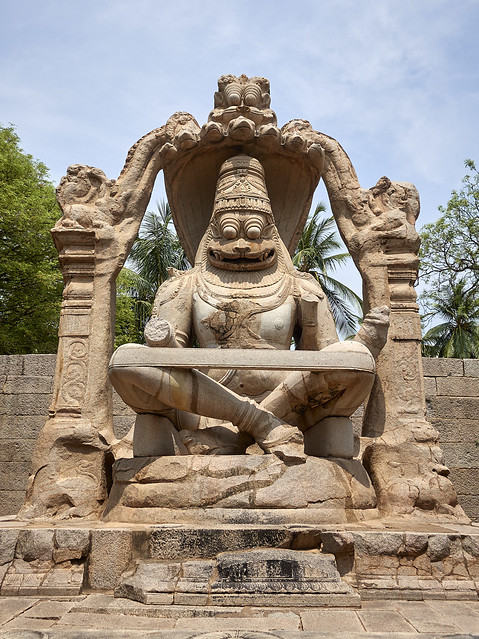 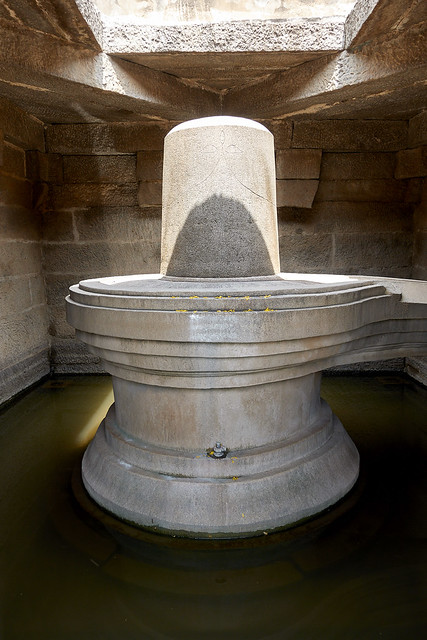 More pictures, more temples. This underground temple is kind of a well or tank, and is submerged during the rainy season from June until August or September. 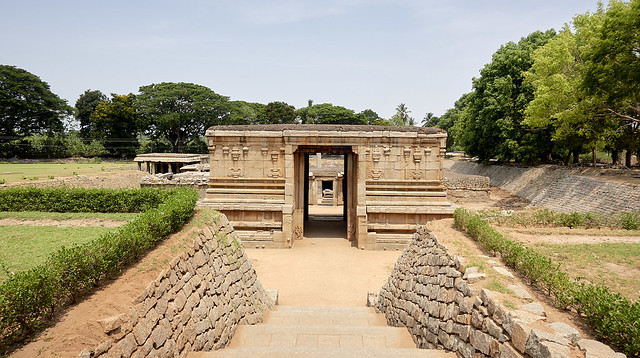 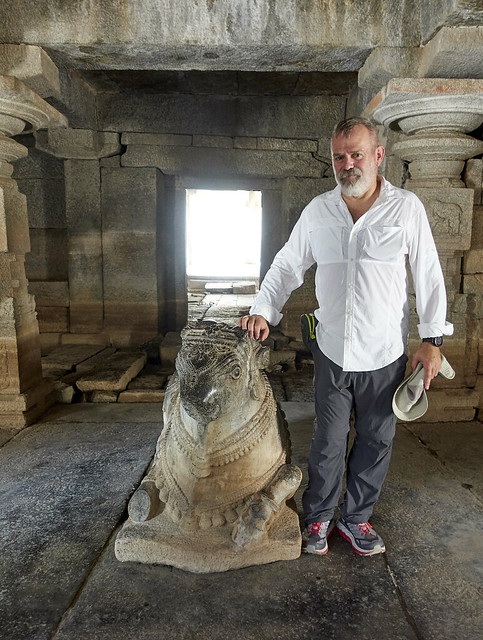