Today was enjoyable and a bit random: Julian are I were invited to a wedding function! Of course, how could I say no?

This particular wedding function it's an event held around 2 to 3 weeks after the wedding for local friends and such, called (amusingly) the non-veg function. The basic idea is the women and children all sit in an event tent and catch up and eat, and the men take whiskey bottles and water bottles into the trees at a discreet distance and drink for a few hours and talk about man things. It's apparently peculiar to the area/region, whatever that means... locality is kinda hard to pin down, sometimes a region actually means "India" and sometimes means "South India" and sometimes means "Kannada speaking people" and sometimes it means "the area nearby within an hour or two drive". This is kind of a big complex place, though it's not impenetrable. 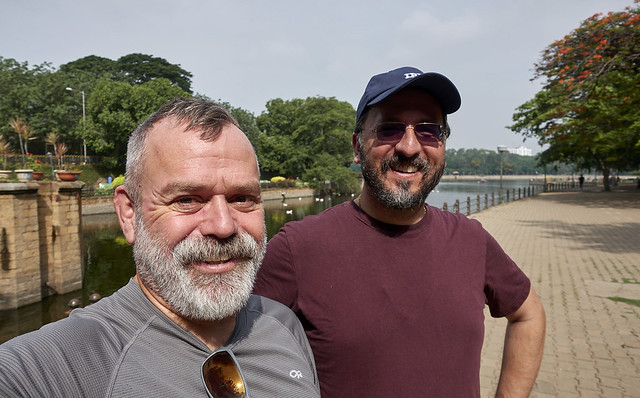 We started out with a walk around Sankey Tank, a really nice parkland around a reservoir, along with plenty of other locals walking. Julian and I got a bit sweaty, then stopped at a bakery and picked up some sweets. I've been craving sweet stuff, as most food here is very savory and a tiny bit spicy. Yum.

Then, then it was off to the nonveg function, woo! We called up an Uber for the long ride out just beyond the southwestern urban fringe, a few km further out than the ring road. It was a bit odd out there--empty fields, some corn-looking fields, a large trucking distribution center that the road went straight through, some large 15 story apartment blocks for no particular reason that were nearing completion, a modern-looking factory that made electrical ceramics--and there weren't a lot of landmarks, so the Uber driver was getting slightly frazzled as we went down one dirt road with thorny bushes, backed up, went somewhere else, then down a road and behind a barbed wire concrete wall and aha, there are the women in the very fancy saris, this must be it. 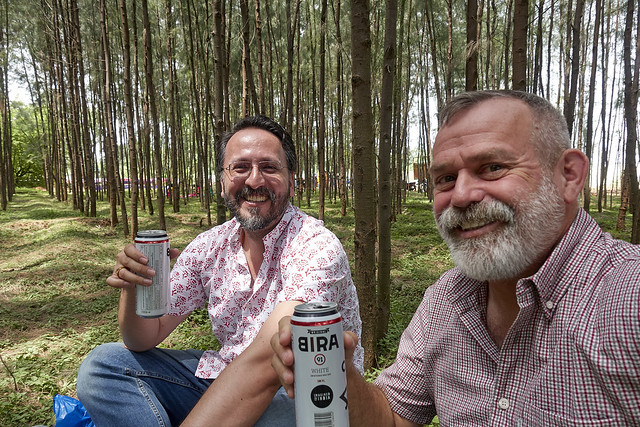 At the nonveg function

We had bought beer on the way out, and took our bags into the she-oak grove along with other menfolk and sat down, Julian and I and his buddy Lokesh. It's funny but I never realized that drinking is kind of a bit taboo here; it should be done discreetly apparently, so we enjoyed our craft beer away from the children and the families down in the tents, snacking away. Lokesh trundled down to the food area and brought back a couple of leaves of food (well, huge paper plates with printing to make them look like banana leaves)--fried chicken and some lentil-bean thing. We nommed, and then I took a tiny wander around and looked at the farmland next to the grove we sat in. Yep, rural and villagey, though it was curious that they use granite posts for their fencing. 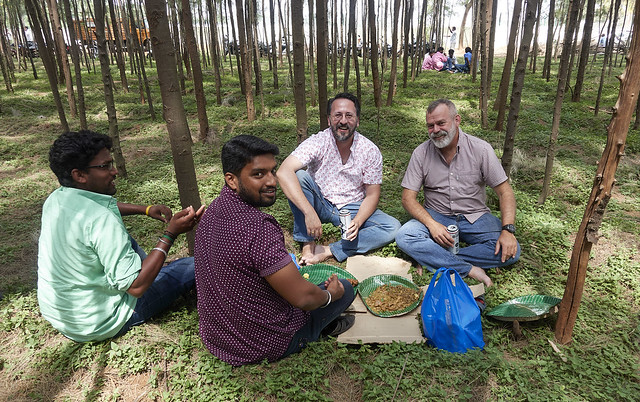 Enjoying a picnic in the trees 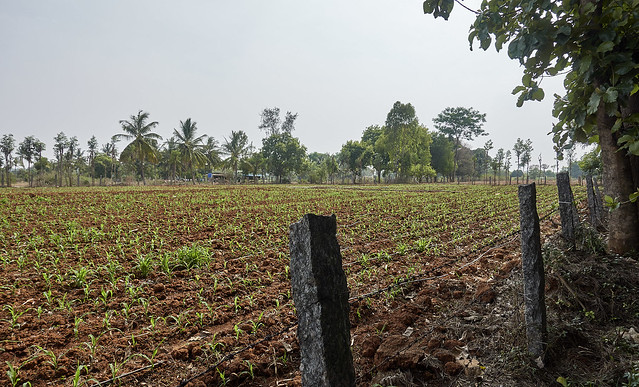 Next to the cornfield

After some enjoyable craft beers (a brand called BIRA from B9--the blonde was OK, the white was too cilantro-ey but I could see how it would go good with the 'local' cuisine) we were told to get some food in the tent and were ushered into a very long row of seats, directly facing a row of women in very fancy saris and their children. They all kinda looked at me once, but that was fine, strangely I don't really thing I've been stared at very much at all. A little girl came by and touched my arm and then ran away giggling after touching the only superwhite guy at the nonveg function; I didn't mind (for the record, Julian is generally considered white in India, although his mother's family is from Guangdong in China; we both are amused by this.) 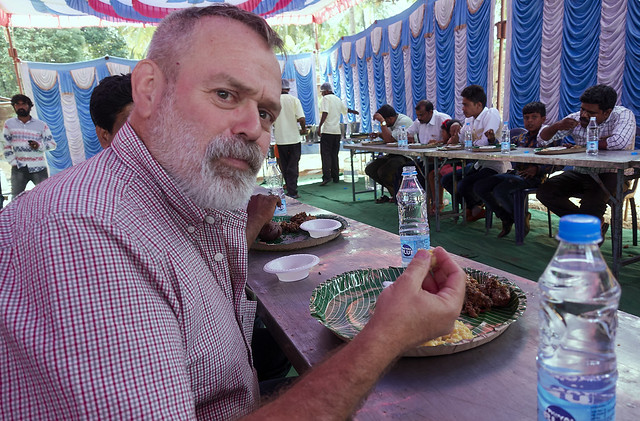 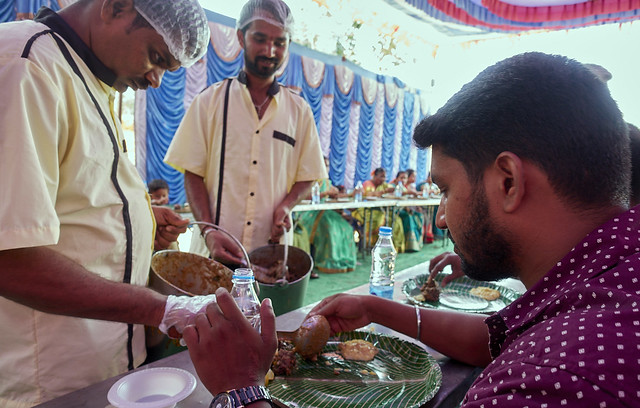 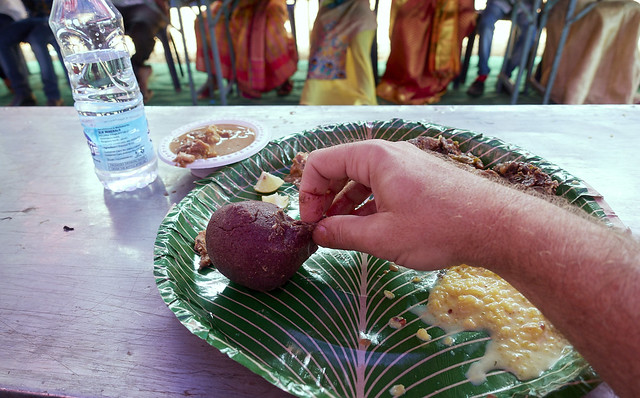 After sitting down, the servers paraded by us with their food buckets, ladelling out food for our plates and bellies: a sweet corn mush that was really tasty, some mutton (i.e., goat) in a dark sauce, some lentil stew. And then the oddball arrived, a maroon colored ball of paste called ragi mudde. WTF? Lokesh explained how to eat it: moisten your fingers with the orange stew sauce, shape it into a large capsule, and gulp it down. Do not chew. Ragi mudde is a millet dough and definitely a rural villagey food; you can eat it every day. I got the hang of it, but it was just far too filling to even eat half the ball. 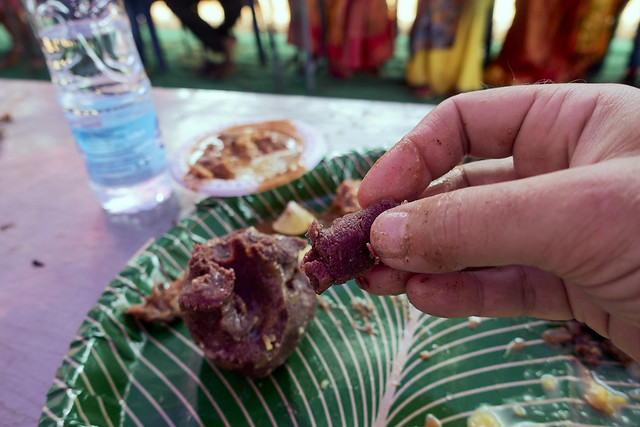 A gulp of ragi ball 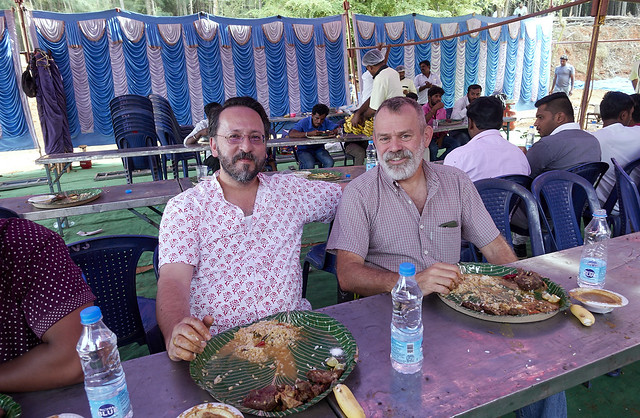 We got pretty full, that's for sure, then we were introduced to the bride and groom... took some pictures with them... and back to the city. It was a really interesting day. I'm glad we got to experience the non-veg function! 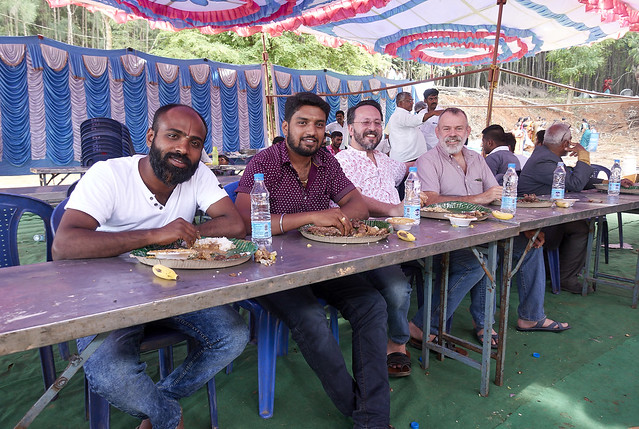 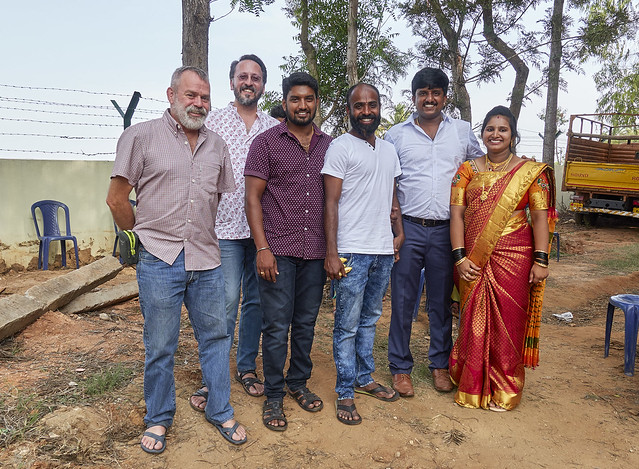 Saying goodbye to our hosts, Raghu and Gita