India is a long way from California, inconveniently 12 1/2 hours time difference, and for me a good 27 hours of flying and sitting. My flight on Qatar Airways was pretty great--SAN to LAX to DOH to BLR--but it still left me a bit out-of-sorts and dehydrated and my poor body had no idea what time it was (and still doesn't quite).

After the 25 minute flight from San Diego, the 15 hour flight to Doha, and the 4 hour flight to Bangalore... I just wanted to wake up. I'd slept most of the flights--oddly the 15 hour flight was easiest, but that four hour last flight dragged--and the plane landed just after 2am, a ghastly hour, and Julian met me just outside the terminal. The air was humid and warm, with an odd campfire-like smell, a campfire that was burning a little bit of dogpoo too. Julian went over to the Uber Zone, and we began the Uber ritual of requesting a ride, the driver calling, and then the driver cancelling. It took us five tries to find our driver, who sloooooowly drove us the 30km or so to Julian's flat. 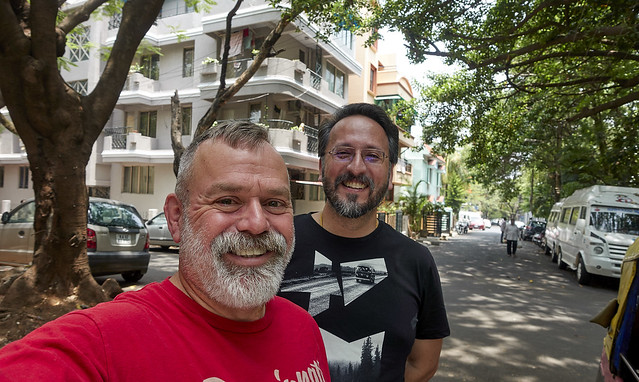 I slept some more. Julian doesn't have aircon, which was a little suprising, but I recalled that his previous places in Brisbane and Sydney didn't have it either. For me, it was just a bit too much--it had been cold in April, and 15C and dry isn't the same climate as 26C and humid--but I was so dehydrated that I really didn't notice I was sweating. It was only when I got the chills and goosebumps that I went "duh, drink water!" so I've been gulping water ever since from Julian's fancy RO dispenser on the wall. 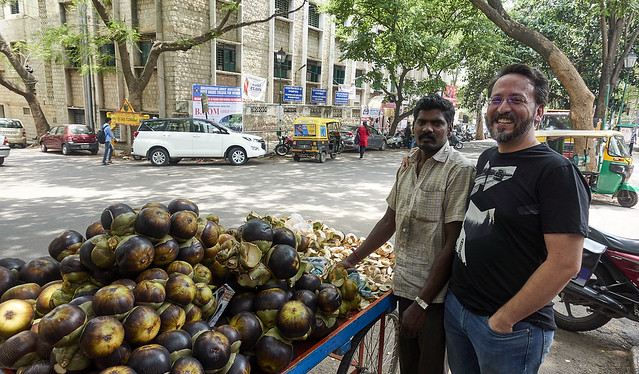 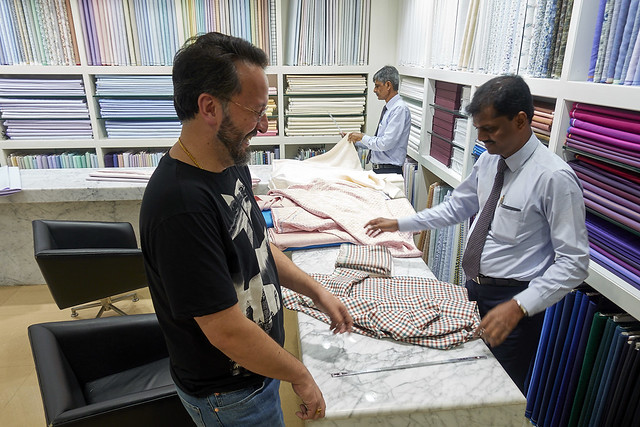 Looking for suiting and shirting 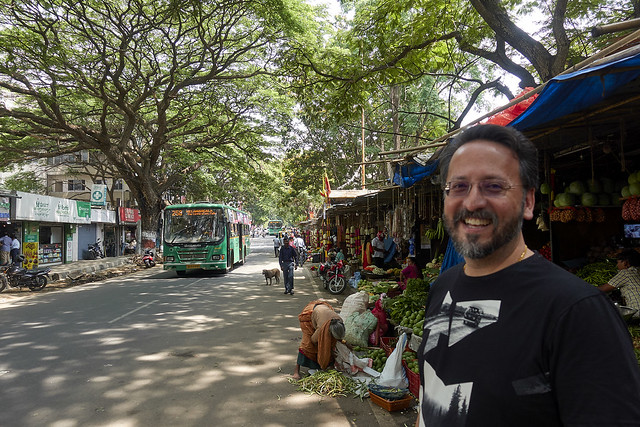 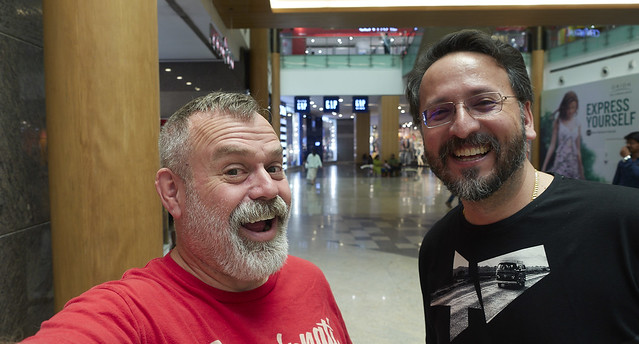 The mall, of course

In the afternoon, we wandered around the neighborhood, getting some jelly apples (a type of palm fruit) and Julian wandered into a fabric store to look for stuff for a suit and a shirt. I bought some nice linen for shirts that Julian's tailor will make; my t-shirts won't last very long. A rickshaw over to the mall (hey it's a mall) and back to Julian's for dinner. I had a curious Budweiser (strong at 8%) and Julian's housekeeper Prabhu made a tasty mutton curry with clove and cardomum. Mutton, by the way, means goat. 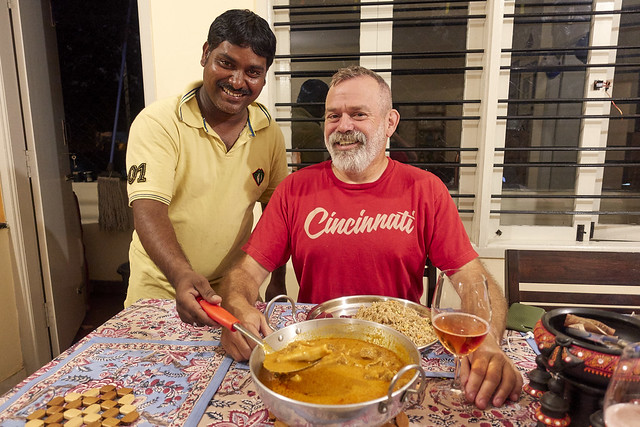 Yay, I slept! But again I'm getting dehydrated, and having a bit of vertigo. Must drink more water. We headed out for breakfast around 9:30--again, more rice and lentils with coconut sauce--and then Julian headed into the office. One of the more odd things is that everyone sleeps late, and the streets and shops are really dead until 10am or so. 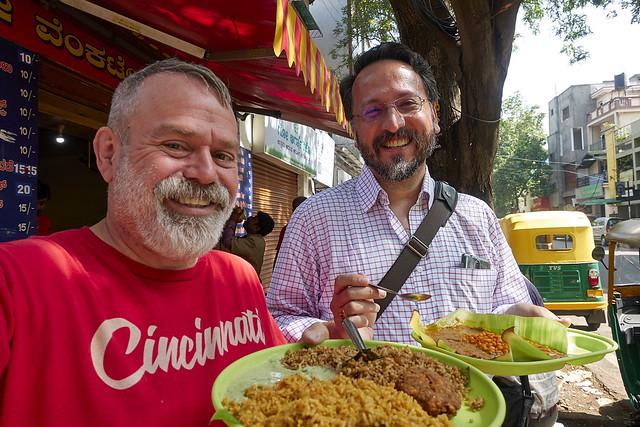 Julian came back from the office early, we grabbed some snacky things that were really tasty (I liked the fish chaat and the salty lime soda a lot), and then more walking around looking at fabrics. Jet lag kicked me in the butt again, so I napped, then Prabhu came by and did cleaning and made beef curry with dosa for me; again it was great. 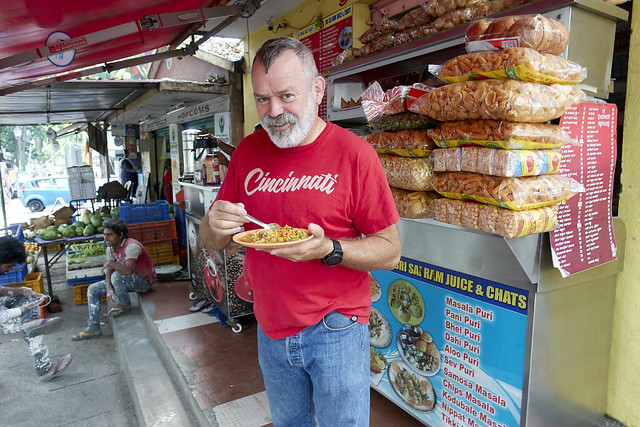 I'm going to try and sleep tonight at 11. Maybe with luck I'll get eight hours sleep!

Well, I slept really really well. Wow, is that it, am I over the jet lag? Yep, sure seem to be--the 30C temp now seems "warm" and not "oppressive"--and we had a full day of just hanging out and eating and drinking. In the evening, we had dinner with a good friend of Julian's and an old co-worker of his. 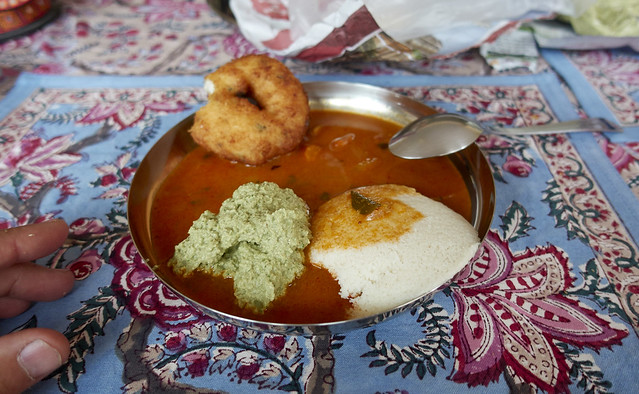 As this is India, it's time for more food, strange food I can't describe but was delicious. Julian ran down to some street stall and brought back Tamilian food for breakfast--a savory donut, some ricey thing, a spicy tomato-based lentil-like stew, coconut chutney. It was great. 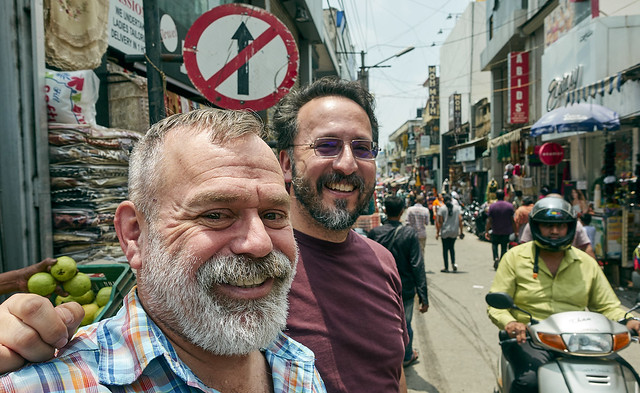 Me and Julian shopping

Today's goal was to simply go to Commercial Street area and get shirts (for me) and suits (for Julian) made. He'd found a tailor a couple of years ago, and with the fabric we bought he needed that suit made for an upcoming wedding. It's Saturday, busy, and I was kinda eager to get out and see a new part of the city away from Malleshwaram. Commercial Street is a good 5km away or so, so we hopped in an Uber and half an hour later in slooooow traffic we piled out.

The tailor sized us both up, taking all sorts of measurements in his book, noting my measurements and telling me how to buy better fitting shirts (shoulders need to be skinnier), and asking me all sorts of questions for my new five linen shirts: Soft or hard collar? Soft. How long a sleeve? Long. Plaquet same? Yes. One pocket or two? One. Square tails, semi-square, tails? Cuffs on sleeves? Yes these are tailored shirts, which I just normally don't do. Julian did better, the tailor showed him a picture book of suit styles and he pointed to the one that he prefers (a slightly cinched waist, unlike American square suits). 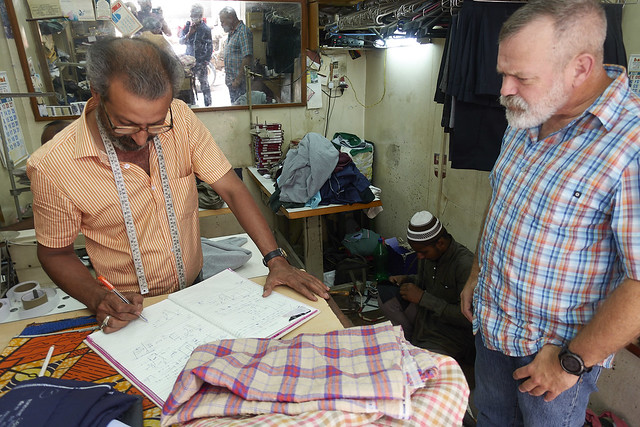 At the tailors with shirting 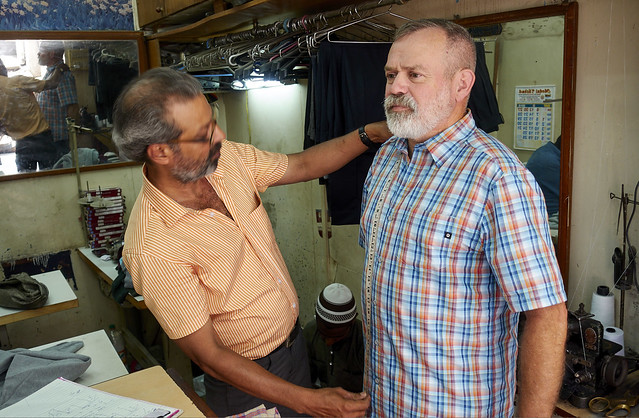 We were getting a bit hungry, so we ducked into a McDonalds (yep), just because I was curious about the menu. NO BEEF was displayed above the cashiers, and there were multiple odd choices, like Mexican McAldo Tikki and Mexican Cheezy Fries. I played it safe and had the Maharaja Chicken Burger (it was OK); Julian had the American Cheese Supreme Chicken, though we did split a McPizza Roll. 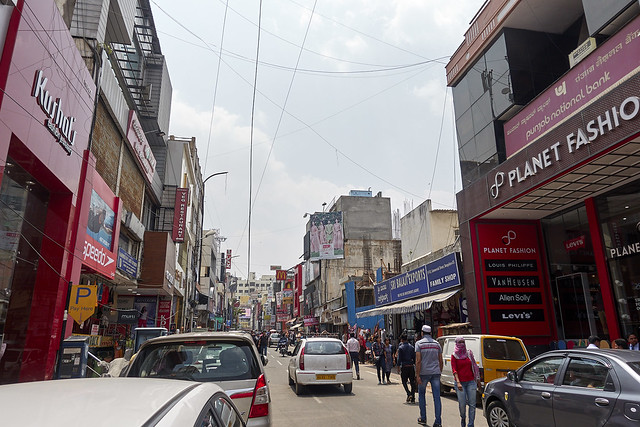 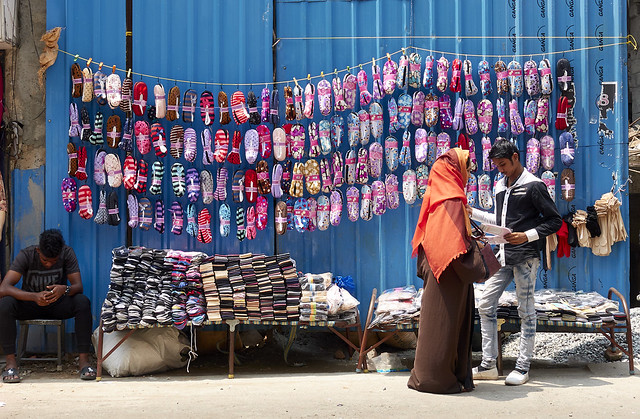 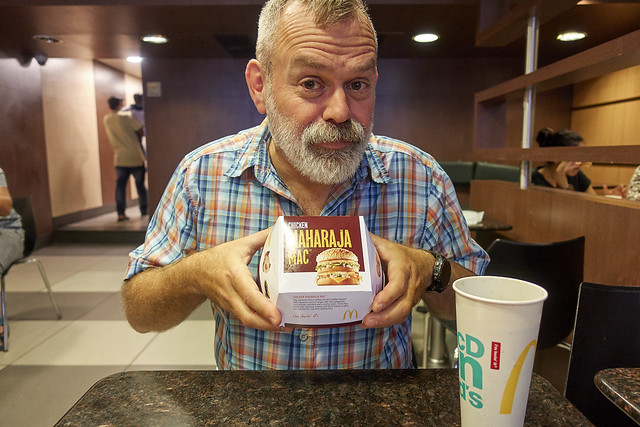 After our glamorous lunch we browsed a fancy jewelery store (so much gold) and then got an Uber to Toit Brewpub about 15 minutes away. Our route took us up a vaguely aspirational hipster neighborhood, where I counted several instances of Indian male 20-somethings with long floppy top hair/shaved short sides and polo shirts and shorts, out on the streets hanging out with the bro-friends. The beer was OK--we had a sampler--and the venue was lively and enhanced by the Bangalore Metro trains scooting by every ten minutes some 20 meters above our heads, like we were in some theme park. 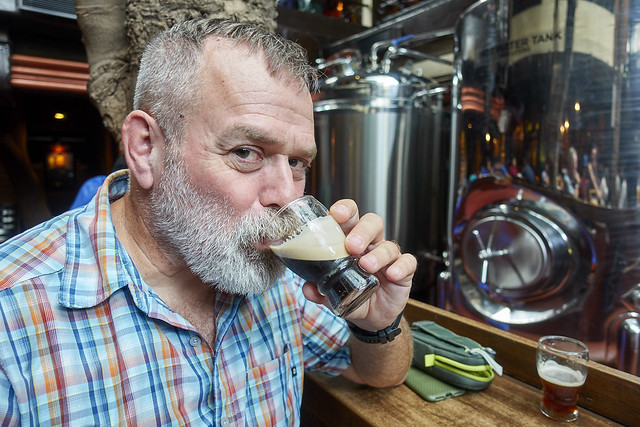 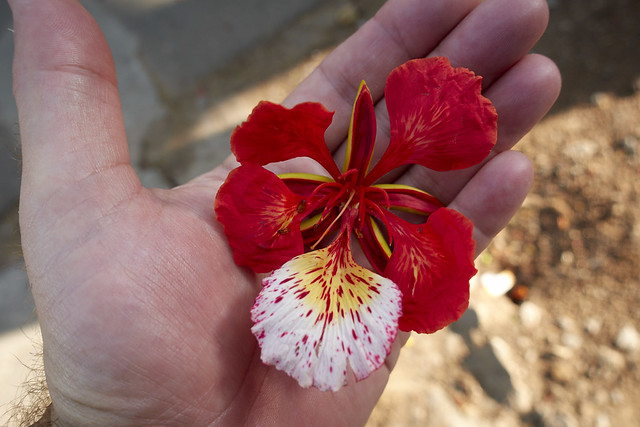 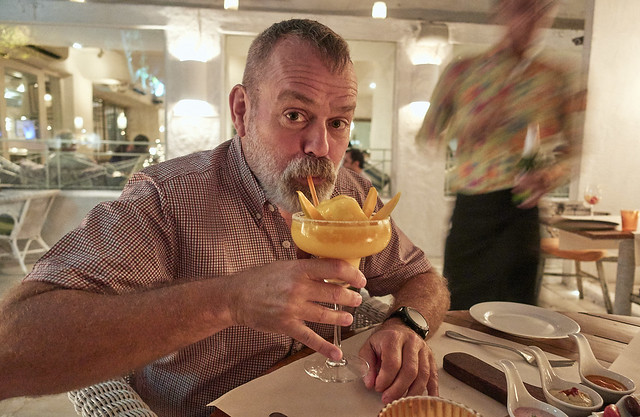 Mango Margarita because Drinko for Cinco

Dinner was at Olive Kitchen, a Mediterranean restaurant, with Julian's good friend Reshmi and his old coworker John. We all work in IT in some form or another, so there were a few war stories, fun to meet new people and I really enjoyed the company (and the mango margarita). Each person I'm meeting here has some interesting backstory; so I've found it really fascinating to open up a bit and share stories with them. Reshmi, for instance, is from northeast India, and (gasp) is divorced, which is very socially difficult in this very structured and male-centric culture. Certainly Indian weddings are known for being elaborate and a key pillar of life here, and I've never considered what a divorce would look like.

We'll see a bit more tomorrow about the "wedding", as we're attending the curiously named "non-veg wedding function", which I gather is a low key reception event held a few weeks after the actual wedding. There'll be a bit of (discreet) drinking, and food of course. This is India, and food food food is always important!