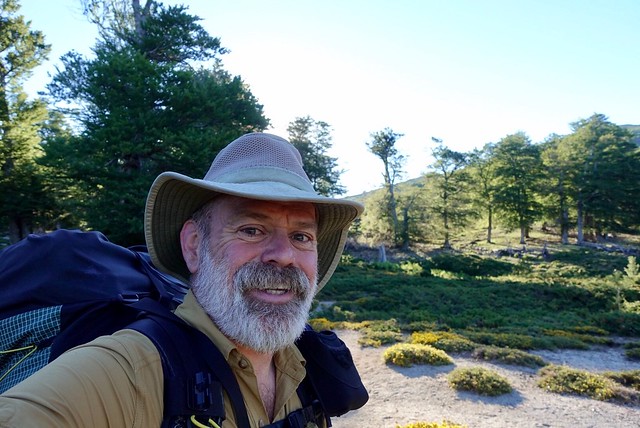 I woke up at the usual--5:00am--when the sky brightened and the birds started chirping... and dozed a bit more than I should, but no worries, I was on the trail at 6:30am.

Today's destination is Refuge Paliri, and it'll be a stretch, doing a bit more than two stages--4 and a half hours to Refuge Anisau, then another 5 to Bavella, plus 2 to the refuge. Call it 11 1/2 hours; and it's hard to predict how tough it'll be from the hours given in the Book. After that description of "easy easy easy" on a not-so-easy day, and a "tough day" that turned out to be moderate, I can't map what I do to the author's measurements.

It was cool and quick heading out of the Bergerie de Bassetta, a gentle climb in the very early morning shadows, passing a little chapel on the way. This trail is kinda odd in one sense, it's very remote and you generally don't pass any structures outside of towns except refuges and bergeries. And by structures I mean anything--powerlines, dams, irrigation canals, water tanks, trailhead signboards. It's a bit of a shock even to walk on a dirt forestry road. Anyways. 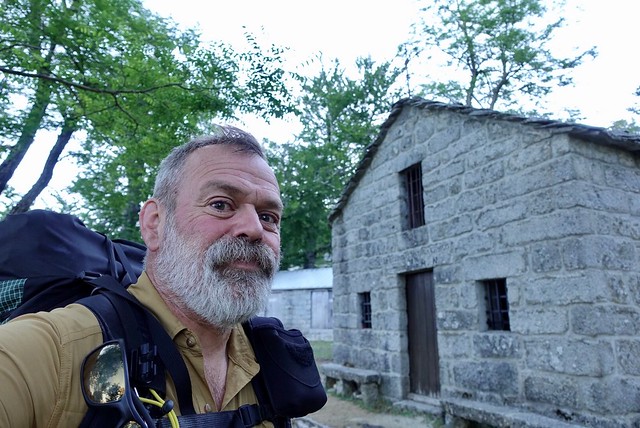 Book said 'Refuge Matzala' is 45 minutes, but I found it in 30, and was happy I didn't stay there, it was one those 'campground in a paddock' type of places that just doesn't appeal to me, and there wasn't much of a view. Further on, I passed Bergerie di Croci, and it looked pretty organized with a view to the mountains north. 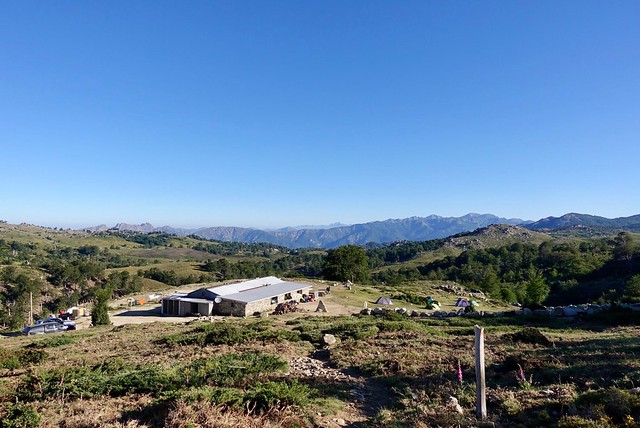 Bergerie with a view

There was a guided group of walkers just about to leave, heading north, all lined up in (mostly) orange shirts and too-big daypacks, and the guide made hand gestures towards a pyramid of large duffel bags with a stern tone of voice that I read as "make sure yours is in this heap". I was glad to not be apart of that gang. 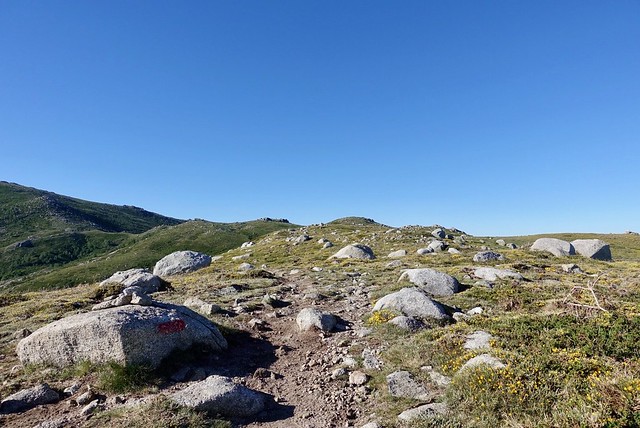 Trail to the col

From Croci to the top, it was a fast walk, very smooth and a gentle gradient over wide open countryside, with a couple of awkward uphill bits that made me wonder if the track was designed by three or six different people and just glued together. At the top, there was a huge gaggle of people that had just arrived from the other side, all gawking around; I didn't stop to join their party. 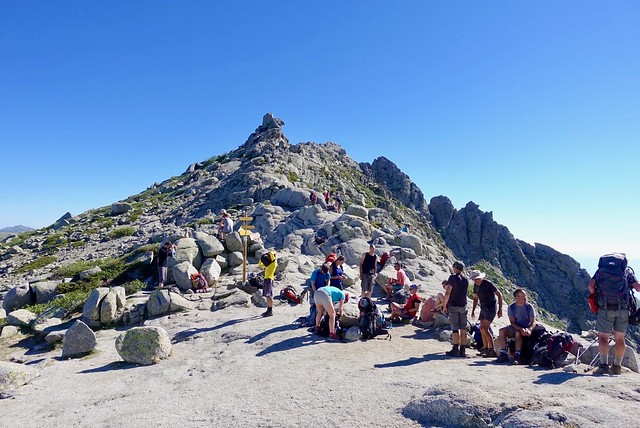 Far too many people 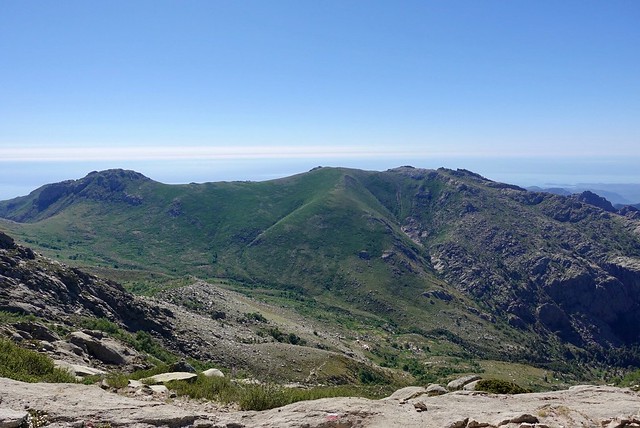 The descent to the refuge was a classic GR20 downhill: dusty covered granite rocks, down down down, with multiple competing paths, loose rocks from tennis ball to bowling ball size, and the occasional micro-stream to make things muddy and ugly. I slipped once, ow, but nothing bad--it was my first 'uncontrolled descent' on the GR20, and was kinda amused to make it this far without an oops. Just after that, a couple stopped and chatted at me in French that I kinda understood, then German that I kinda understood, oh, there's something wrong with my backpack? Then they asked if I spoke English, and said "Nice pack". They were Swiss, and both were using ULA Circuit backpacks, and just went on and on how they were great. Mine is a ULA Ohm 2.0 and it's been fantastic this trip, particularly with all the twisting I've had to do on the rock scrambles. 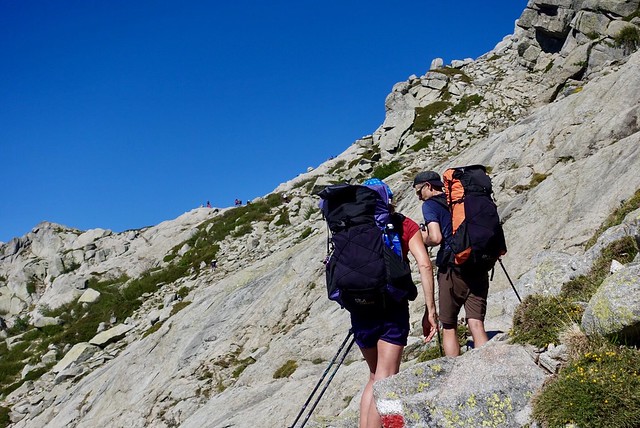 I made it to the refuge just after 11, and there were two men talking and they just didn't want to be bothered. I asked for a Coke--no, they have none--then asked what else? I ended up with a half liter of beer, uh, I mean a tall can. It tasted good, and I decided that Refuge Paliri would be a good stop for the night. 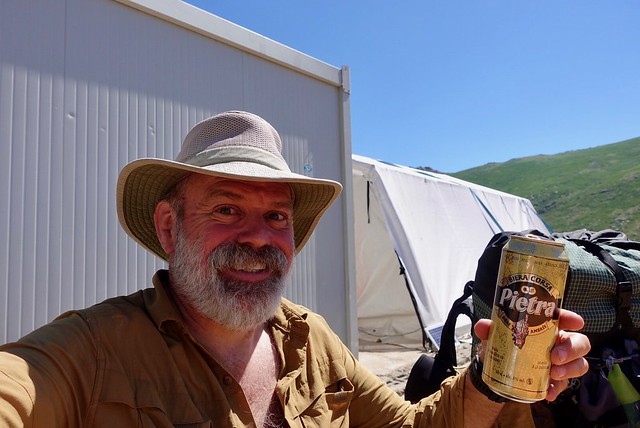 No cold can of Coke, only beer

Leaving the refuge for Bavella, I had two choices: go high, or go low. The book-of-dubious-authority said "take the low route for flowers, the high route for alpine scenery". I'd had enough alpine scenery so I went low, which was probably a mistake: the trail was hot (as in 30C hot) and dry and dusty and rocky and not at all pleasant. It looked good, but it was really a lot of up and down, oops, a bad choice, can't win them all. By the end of the day, I was struggling, and decided if there was accomodation at Bavella that I'd take it, rather than walk another 5km to Paliri. 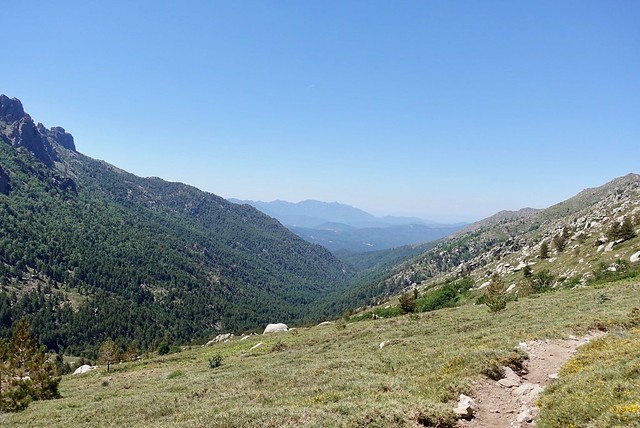 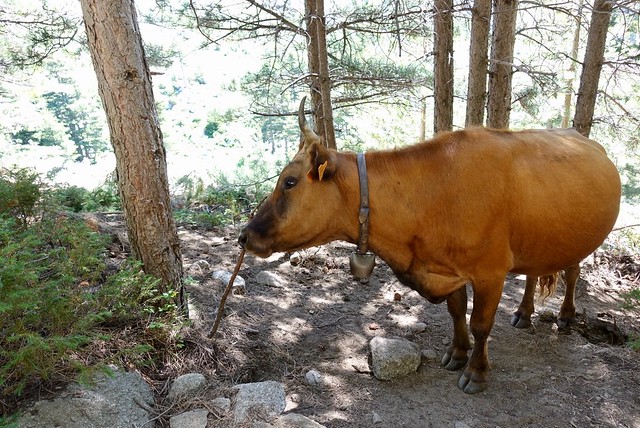 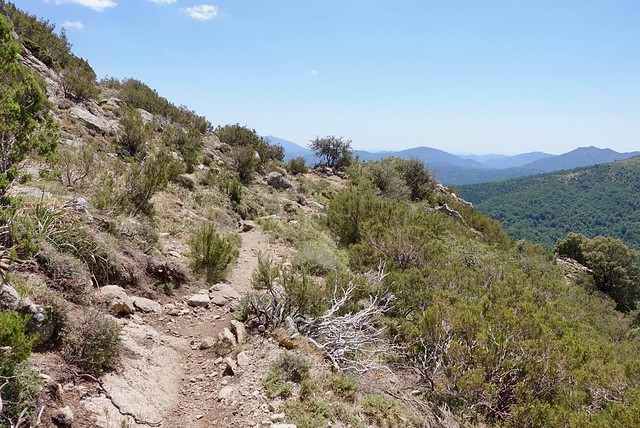 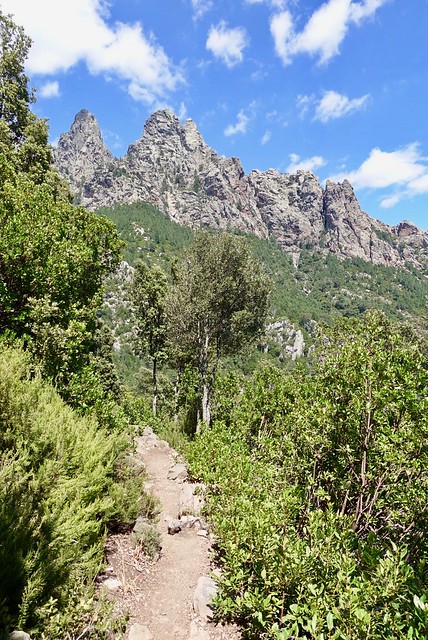 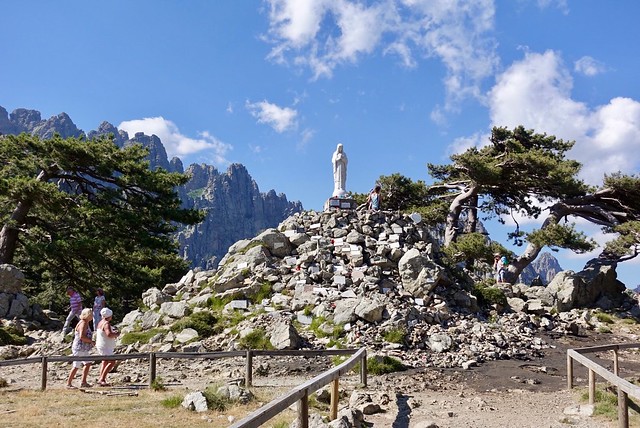 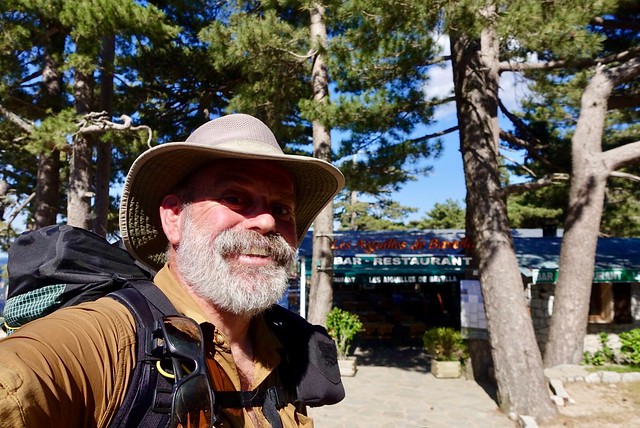 Les Aiguilles de Bavella Restaurant at the end of a hot day. This'll do nicely.

There was accomodation, and even better, a nice little restaurant with a great terrace overlooking the steep, jagged, awesome range called "Les Aiguilles de Bavella". I was really wanting an ice cream, but a ham-and-cheese crepe sounded even better... with a Coke heheh. 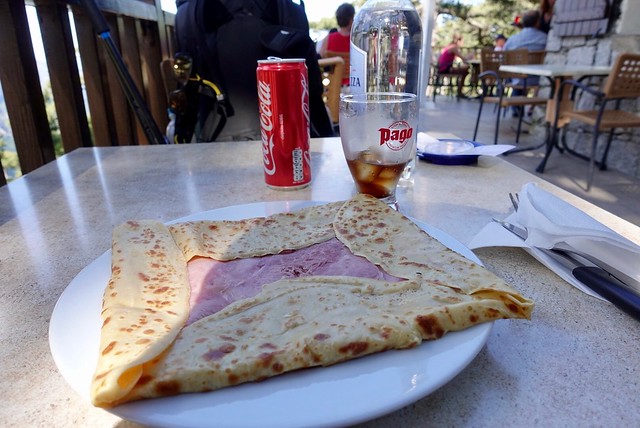 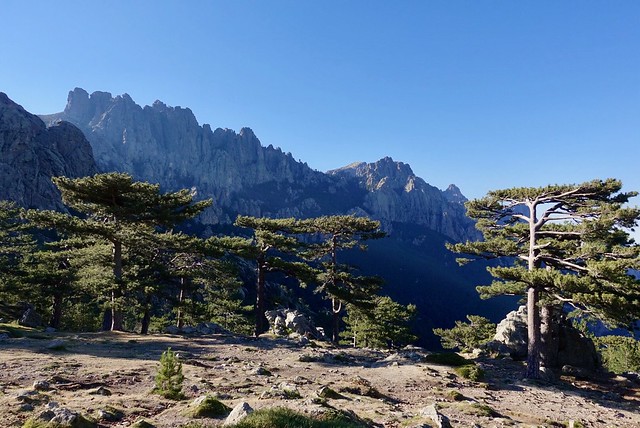 View of the Aiguilles de Bavella

That really made my day, and right about then I went over to the menu board, verified that a demi-pension in the gîte was 38€, which sounded great, and yes they had room. I enjoyed a shower, a great evening meal, and a comfy mattress. 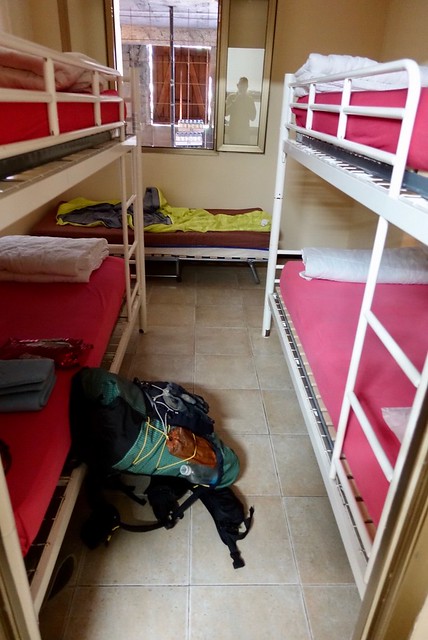 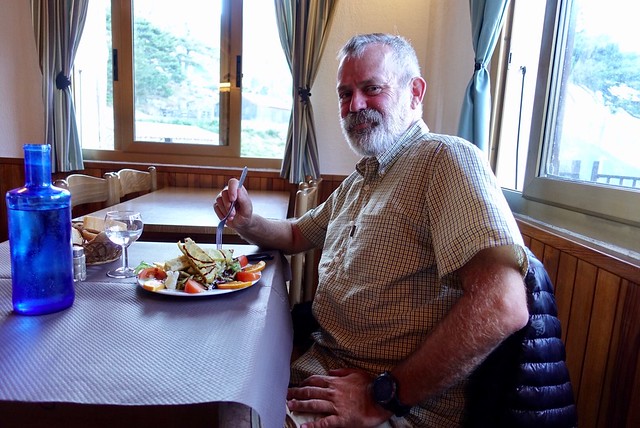 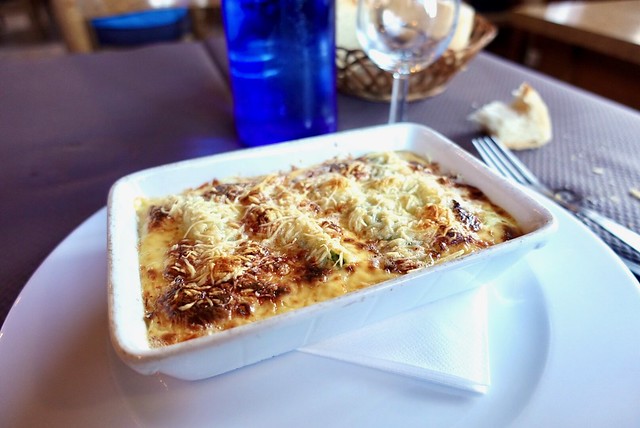 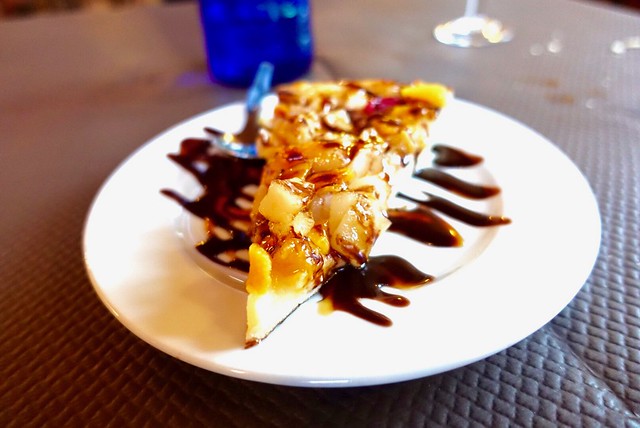 Torte for dessert. Delicious as well.

Tomorrow's the last day, and after thinking about it I was wondering why I should be pushing it? It's a supposedly easyish walk to Conca, I'm likely not going to make the 1:55pm bus, there's a hotel there, or I can wander down the hill to Ste-Lucie and find accommodation there for the morning bus to Bastia. I'll be finishing an day early than planned, so there are plenty of options.