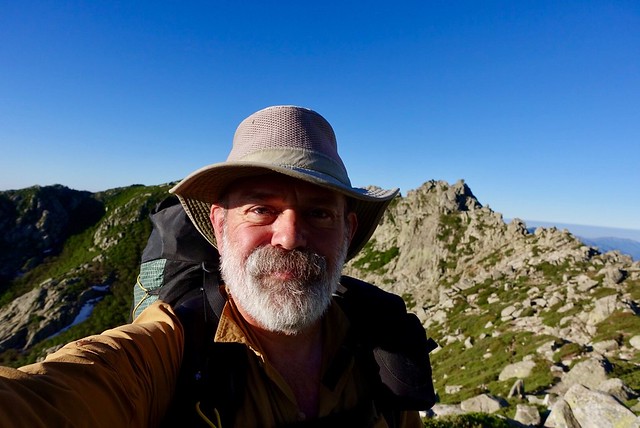 Well, at 11pm nature called... and I looked up and saw stars, lots of stars! The clouds had all gone away, and down below on the coastal plain, I saw city lights, wow, hopefully the weather will hold? It did, though the wind kept on gusting throughout the night--it would be still, then whoosh whoosh from the east, then quiet again. Enough to make for a tedious night's sleep, but no worries; I woke at 5:15am and said "enough, let's get going". 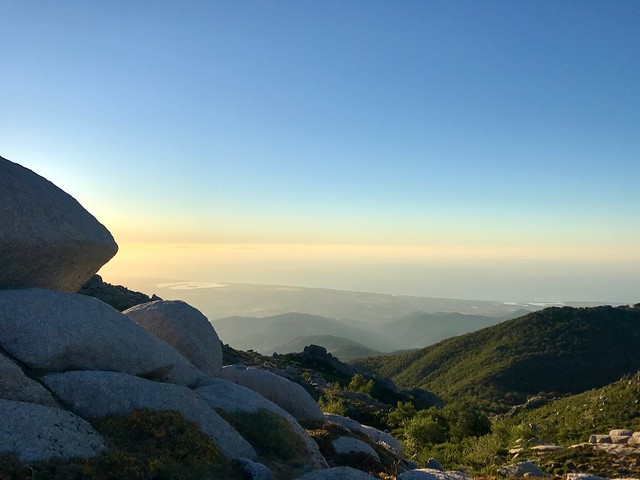 I'm going off the plan as it were--I'm just not interested in the 4 hour days that the 'stages' suggest; I'm more comfy with 10 or 11 hours of hiking, with a decent break for lunch. Today I'm either going to head on the original GR20 track that was abandoned in the mid 1980's for going too high and being too lightning prone, or I'm going to follow the current GR20 and enjoy food and comforts of the refuges or bergeries I find. 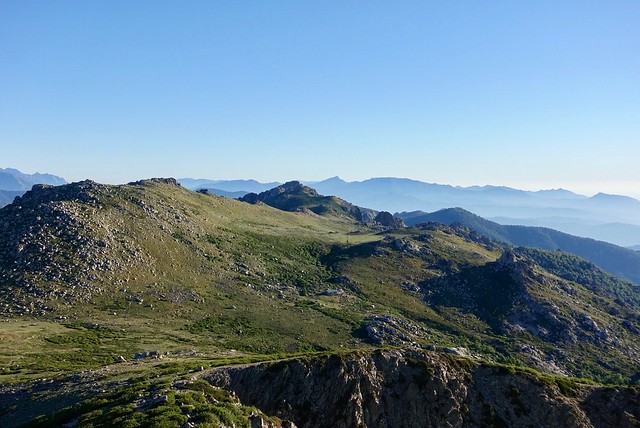 Leaving Refuge di Prati behind (gladly), the GR20 reverted to its northern flavor: long long stretches of uphill, with few level or gradual inclines. Up 200 meters, wandering along the ridge, down to a notch, back up, rinse repeat over and over. The weather was holding, not a cloud in the sky--and I regretted not putting sunscreen on my face for the odd reason that the sunlight reflecting off the Mediterranean was really intense. 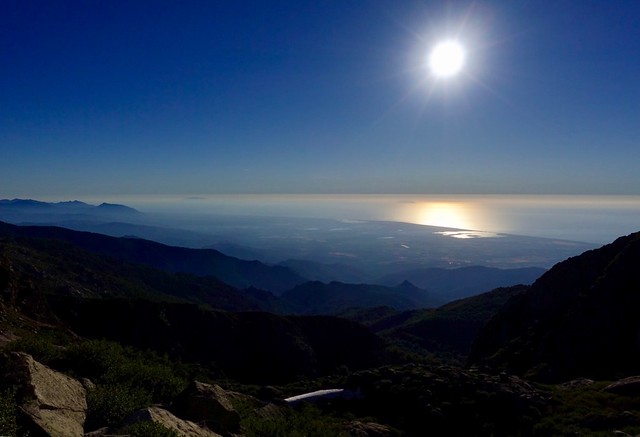 Sunlight off the sea 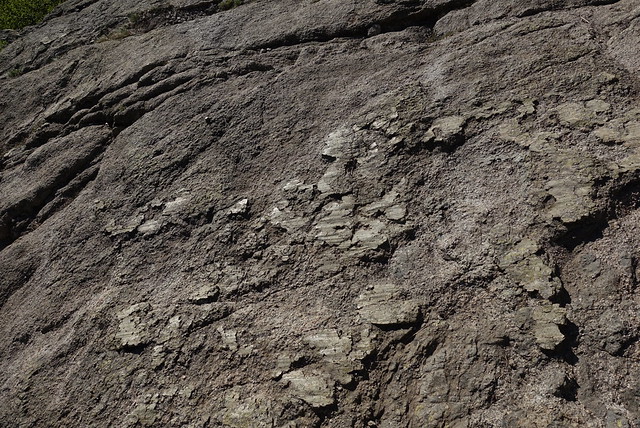 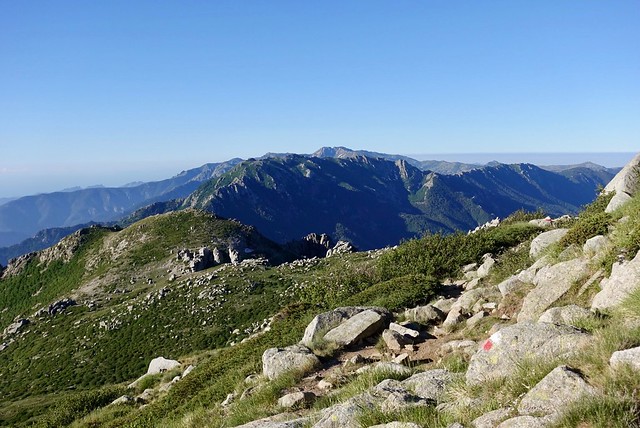 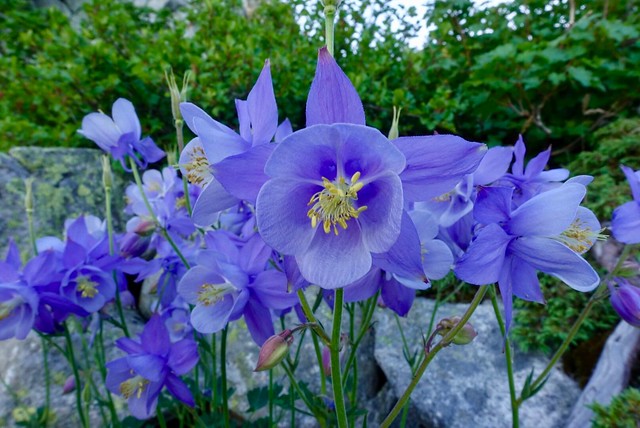 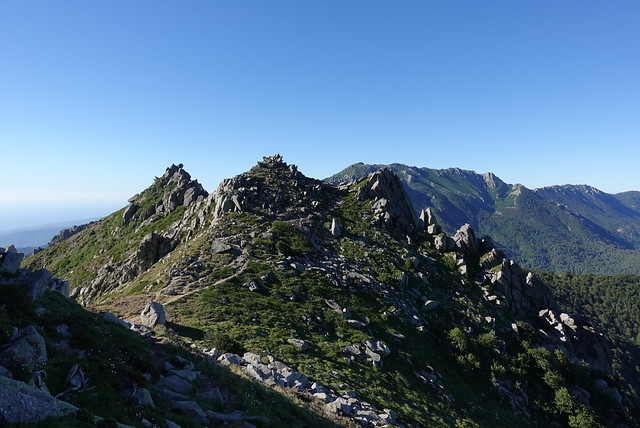 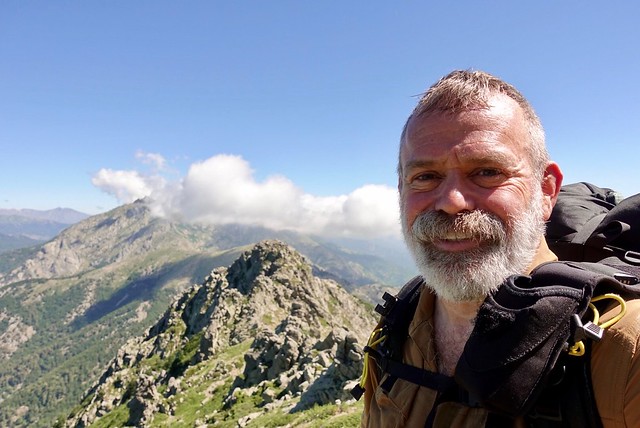 There were some super-pretty flowers, most notably the columbine, and some fine views out west, by and large I was enjoying things and looking forward to a Coke at the next refuge, which I hit at 12:30. 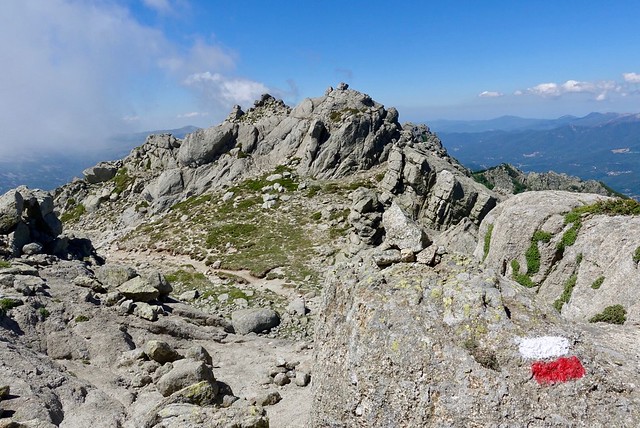 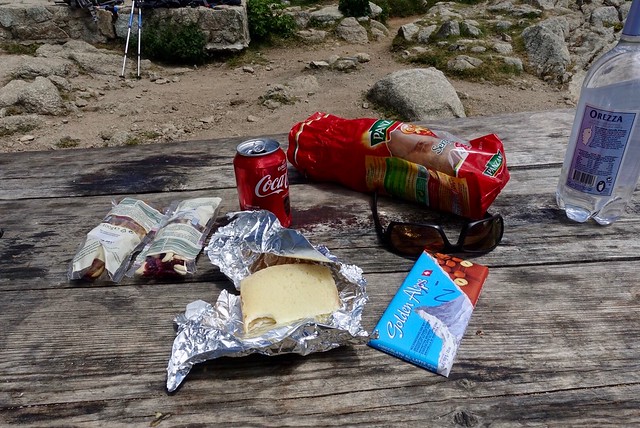 The terrace was closed--it was being renovated with new timber--so I picked up enough supplies for a non-cook dinner and a couple of meals. And a chocloate bar of course), enjoying them at a pair of tables and chatting up a woman (in Spanish) who really liked the Bergerie de Bassetta, about 4 hours away. It has good food and a warm shower.

Well, that pretty much settled it for me. The GR20 doesn't really go very low, so why not stay a night at a local rural homestay, have good food, a wam shower, and head on out refreshed? It'll be better than hiking up high and camping wild, no refuge, eating a no cook meal, and whatever. And truth be told I want a more gentle walk, where it doesn't take six hours to go five miles.

Leaving the refuge at 1pm, I figured it'd be about four hours down, which ended up being right. What I didn't count on was The Neverending Ridgeline. I had it in my mind that the GR20 just gently glided down the 10km--hah! The first two and a half hours were spent hunting and pecking the trail along a rocky ridge, watching every footstep, wondering if I'd slip on this dusty granite slab or if that rock would suddenly come loose. Both did here and there, I wasn't in much of a mood to indulge the mountain, and a few times cursed the GR20 designers, shouting at them "NO YOU DON'T HAVE TO GO TO THE RIDGE UP THAT GULLY BECAUSE YOU CAN, THEN DRAG US HIKERS BACK DOWN--JUST FOLLOW THE CONTOUR, I CAN SEE THE MARKERS 400 METERS FURTHER ON". Their philospophy for trail design seems to be "OK, we found a path through this incredibly rugged terrain, here's some paint to guide the thousands of walkers. Oh, and the trail MUST BE MADE HARD AND FOLLOW THE RIDGE". 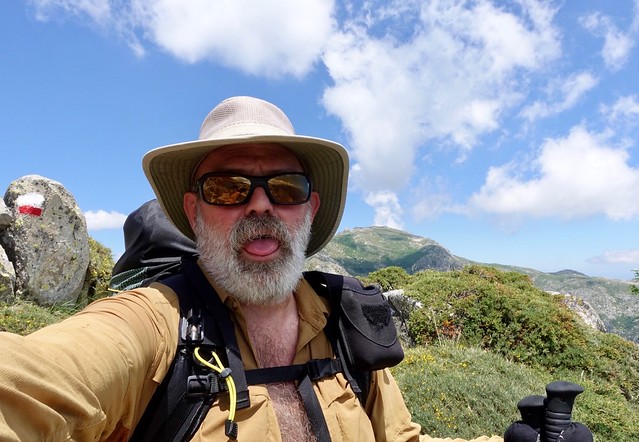 This walk has grown tiresome

It took me 2 and a half hours to make it to the split between the classic and the original GR20, I was feeling a bit beat and took a break at the water source nearby, where I suddenly remembered that chocolate and hazelnut bar and thought "You are mine". Nom nom nom, and it pretty much made me happy in about 500 milliseconds, so when I passed the trail junction I thought "a warm shower would make me really happy" and turned down the hill... with no regrets.

The GR20 track down from the col turned out to be wonderful; at first a bit rocky then a generally smooth path, ducking in and out of beech woods and across broomfields where peacock colored lizards scooted out of my way. 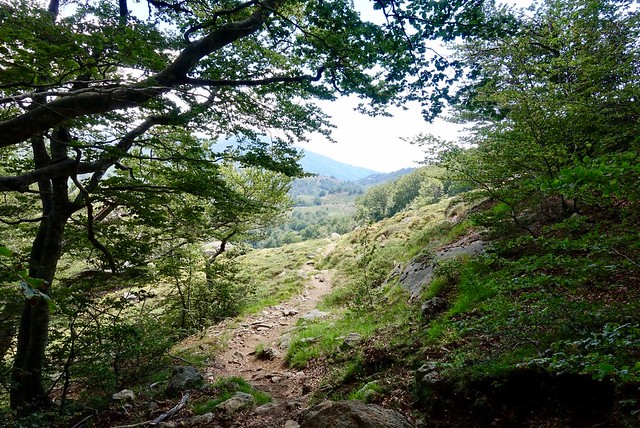 It was a disappointing 4km down (I thought it'd be closer) but really that's just an hour and change, and who's really counting when the sun doesn't set until after 9pm?
Quasi-feral pigs scampered out of my way, I just cruised on down to the Bergeries de Basseta, and negotiated a tentsite and dinner with the Spanish woman serving beers on the terrace, starting in French and then English) and finally Spanish FTW. She said I sounded like I was from Argentina (hah).

A couple of Pietra ambre to take the edge off the day, a pasta-sausage-cheese "salad", and the end to a pretty good day. 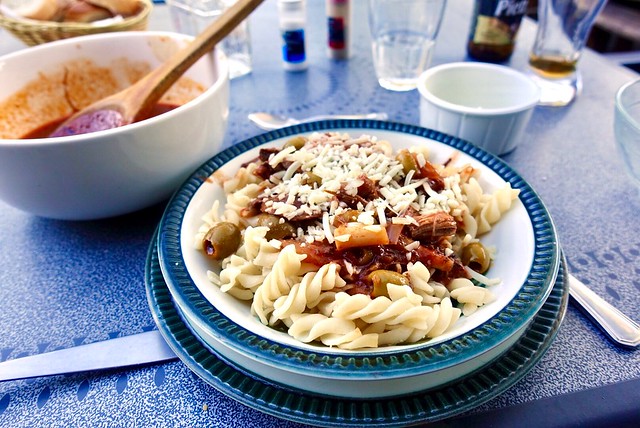