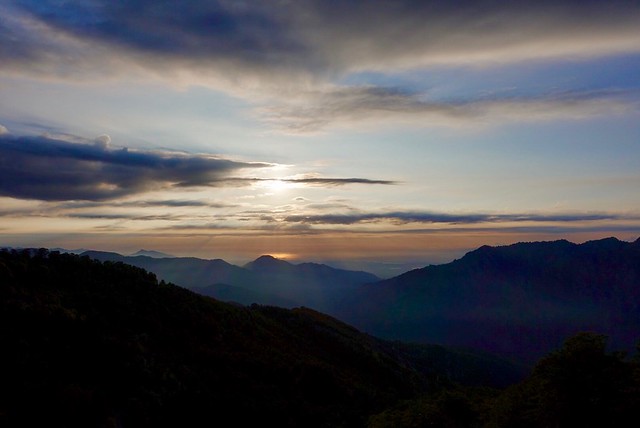 It's 4:55am, and some songbird has decided to perch on my tent and belt out a song to greet the bright shiny day. "Go away Mr Bird" and it flew away... and five minutes later my hayfever kicked in with a sneezing fit. I don't know what causes it, perhaps oaks or chestnuts or the meadow I'm camping in, and it made me reach for the last Allegra pill... and split it, just in case.

The morning's hike was a 16km/10 mile walk downhill to Col di Verde, where I was planning lunch before heading up to Refuge Prati. The walk downhill was unexceptional, except it was fast, which is exceptional, once again I amused myself by taking flower pictures. 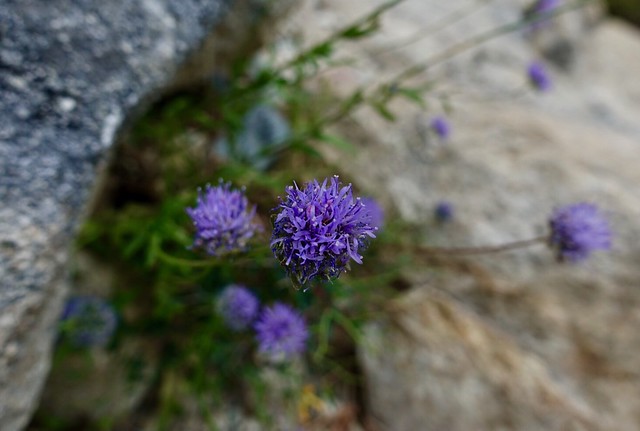 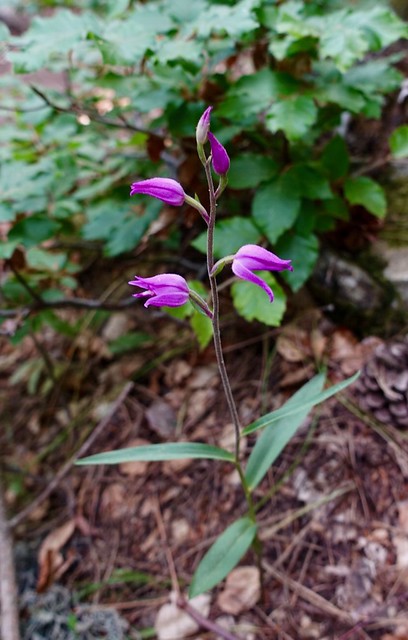 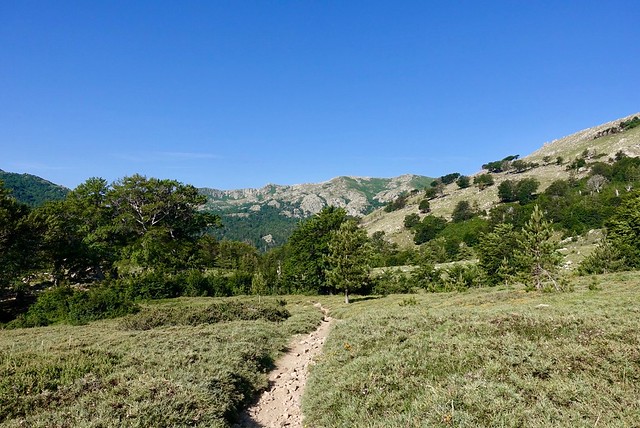 I arrived at 11, so I ordered a ham sandwich and chilled, watching the hikers and bikers come through on this Sunday, and listening to the staff talk in Corsican. I hadn't heard it ever, and yep, it sounds like Italian, and wondered if this'll be the only time I ever hear it. 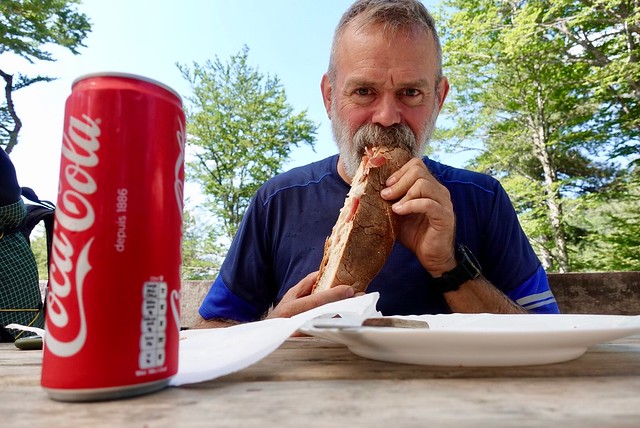 The hikers were, well, mostly French couples, with a smattering of younger 20-something German couples, and a sprinkling of single solo French 'mature' men, say in their 40s. I sat and people watched for awhile, then noticed something odd about the solo French over-40s crowd--the six or so came through were all clean shaven, with eyeglasses, and dark black hair that hadn't started graying at all, but they all had that annoying paunch that's made even more pronounced by their backpack belly bands. As I observed, I just kept on looking at each man's hair glistening in the sunlight, they all were so perfectly coiffed their hair; they could swap their sweaty hiking gear for a suit and be French bankers. Oh, duh--I caught a odd coffee-colored glint in the sunlight--and I realized they have perfect hair because they all dye it! Really guys? Yep, a few more strolled through, looked at the menu on the terrace, and there was just a bit too much color in that black hair. These are men in their 50s, not 40s.

The motorcyclists--again, men in their "40s"--rode fancy BMWs and struck me as middle managers with too much money. At least they weren't all in their swoopy whitish sports leather, though. That would look terrible with a pot belly and a not-so-good dye job. Oddly enough, the women riders (on back, not on their own motorcycles) were the ones that were relaxed and having a great time, while their men were all preeny and haughty. It was a fun way to spend an hour. 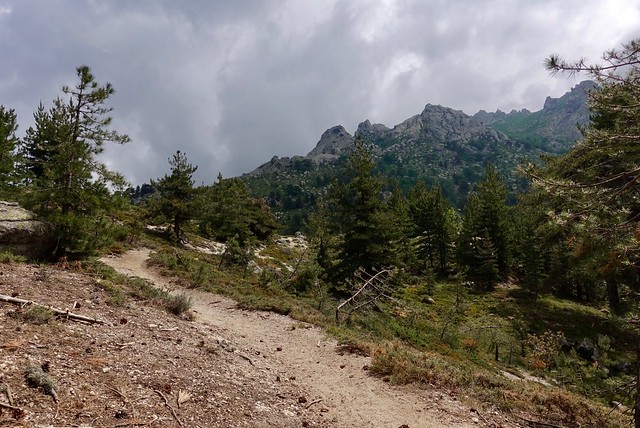 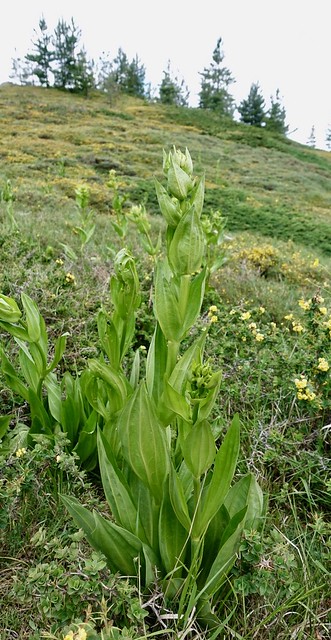 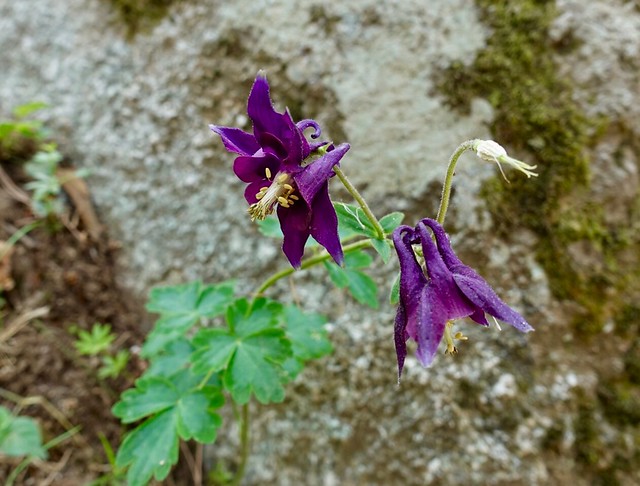 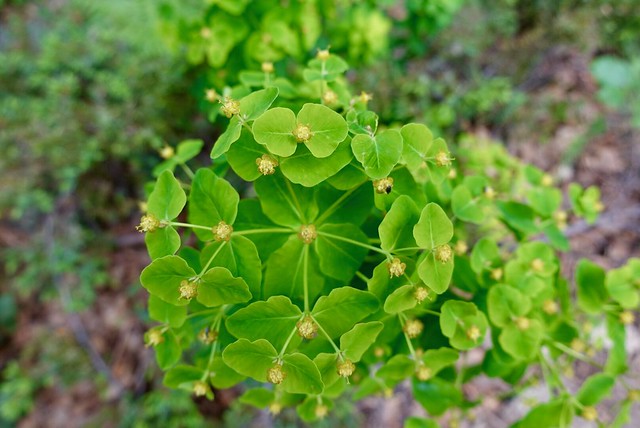 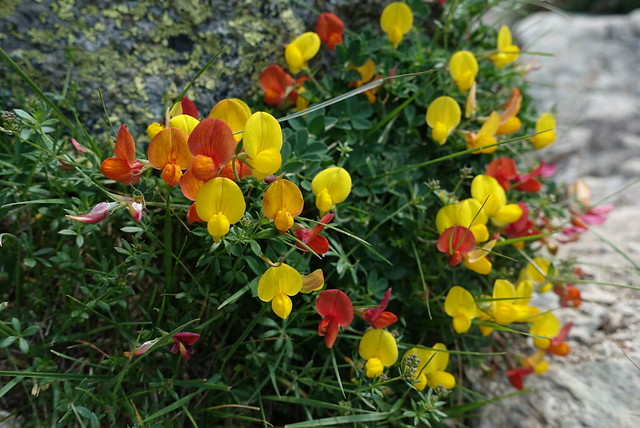 The clouds were building up, and I wondered about thunderstorms; I had a two hour walk east to the refuge, uphill, no real need in stopping here for the day. It got real misty and drizzly and foggy at the top, and cool as well; I was not a fan. I almost pulled out the rain jacket, but saw the refuge a few minutes after cresting the ridge, so I decided it was better to just put up the tent in case it really did rain--it went up quickly. 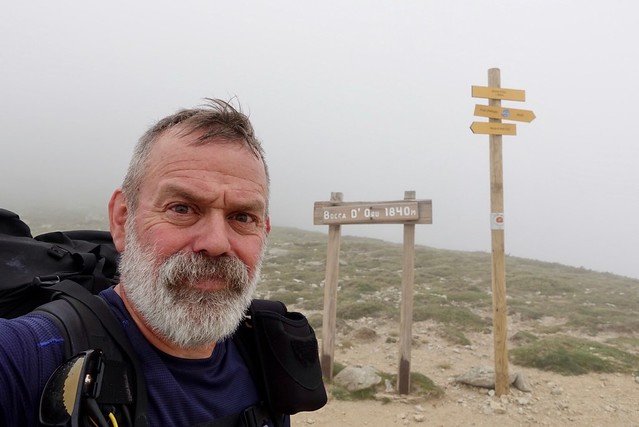 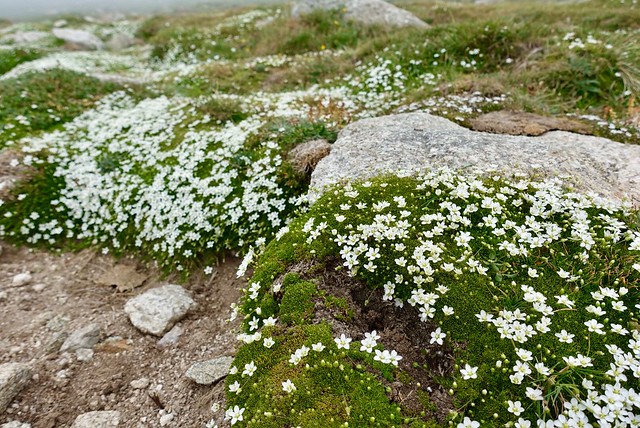 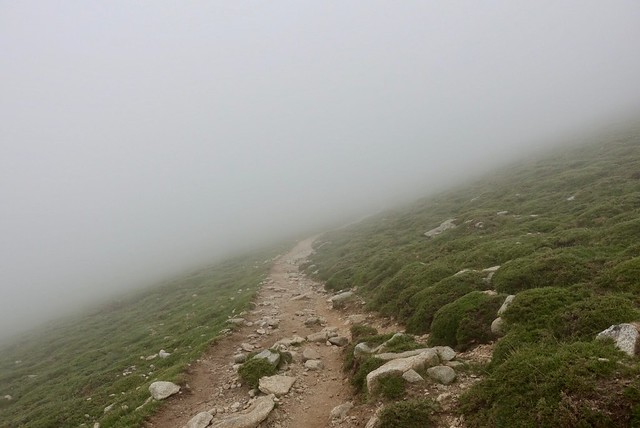 I wandered over to pay my bivouac bill of 7 euros (not that anyone would check), and dammit, I only have a 50 euro note. "Too small" or something (en peu?) said the guardien, so I bought a Coke to bring the sum to 10 euros and that made him happy, giving me back two 20s. Fine. I took my Coke to my tent and took a nap, hoping it wouldn't rain, which it didn't, then wandered around the boulders looking for things to photograph. Horses were roaming about, eating wildflowers, so weirdly I felt like I was in some sort of documentarian competition with them, making records for all the flower species before the human ecosystem overrode what's come before. 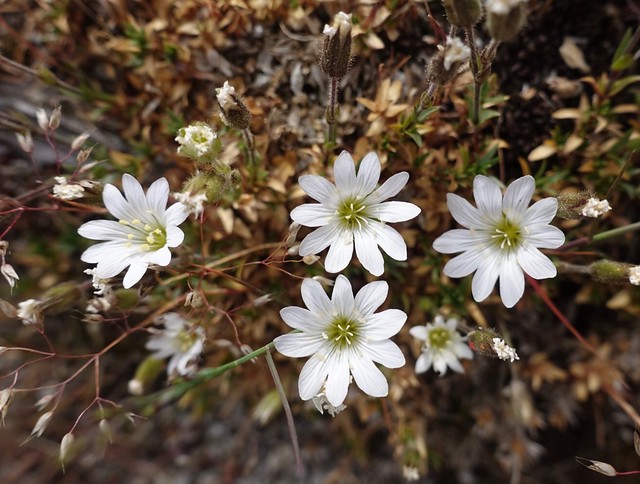 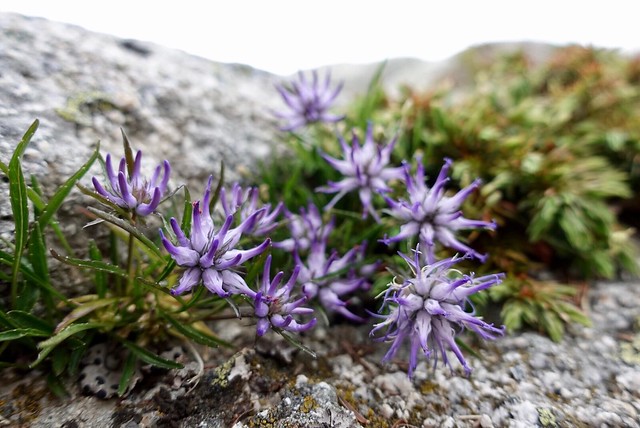 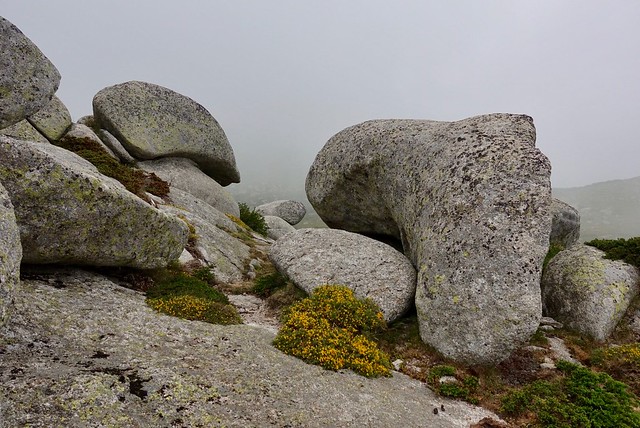 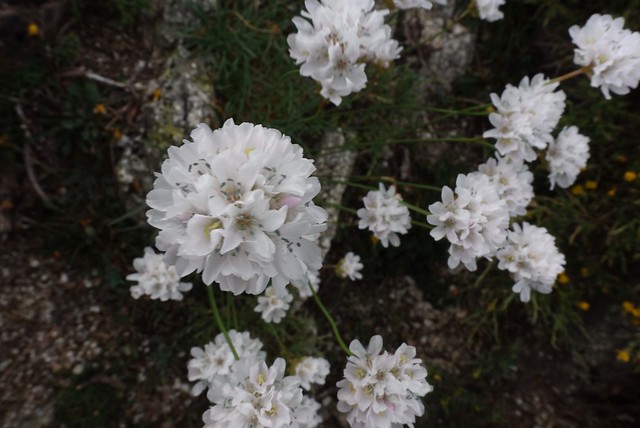 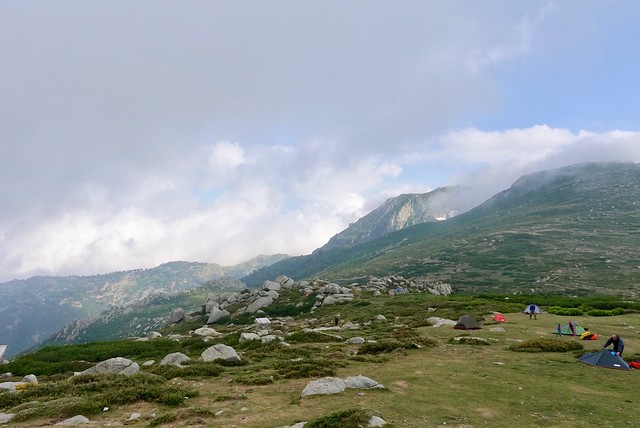 Dinner was something forgettable--even now, an hour later, I can't recall what it was, except the three slices of meat that made it sad--and the dark refuge room, lit by a single two foot long florescnet tube with no windows was dank and noisy. OK, it wasn't forgettable, it was memorable. Still, putting three slices of meat on a plate and calling it charcuterie isn't really cuisine--and I'm being a bit harsh, I did enjoy it though the presentation was lacking. 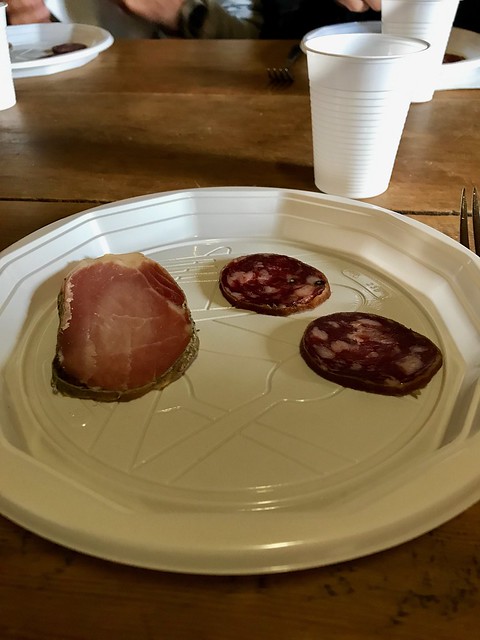 After dinner, the wind kicked up, blowing mist through the refuge campground, cows and horses were wandering through the tents dropping cowpies and horseapples.

Feh, feh, best just sleep off this foul place and get going bright and early!