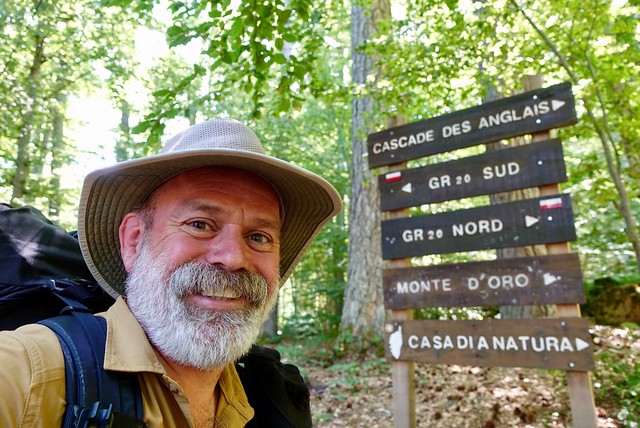 Back on the GR20, heading south

Phillipe was kind enough to drop me off at the L'Île Rousse train station, and I took Tiny Train over to where I left the trail in Vizzavona. 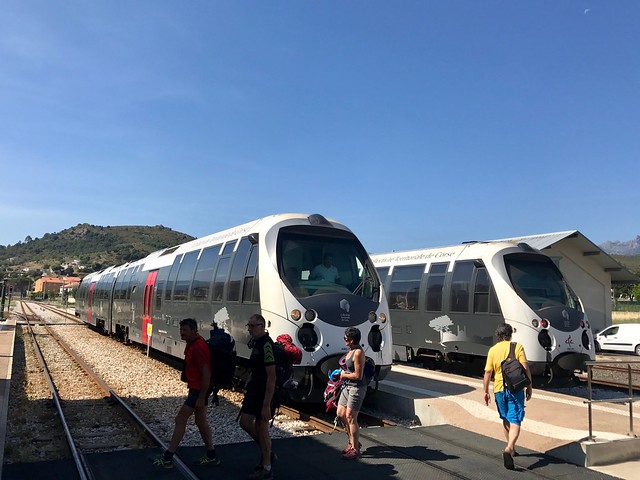 All went well--though it was a Saturday, and as the train chugged along, it picked up more and more hikers, all fresh and smelling like Ariel laundry detergent. It was standing room only when we got to my stop, where five dozen or so hiker/backpackers hopped off and mobbed the tiny cluster of buildings around the station and gawked around confusedly like flamingos on parade, wonder which mountain was their mountain. I decided to spend a little time at the snack shack next to the train station... I just didn't want to get jostled around with the pack on the trail... so I picked the least bad postcard and a stamp and mailed it off to Mom and Dad.

After half an hour, the birdies all had fluttered away, so I was back on the trail then at 12:30... and it was quite a change. It's pretty much PCT-standard, a gentle gradient uphill, with a couple of small 30 meter or so sections where they lost their engineering manuals (or maybe just the hikers made their own paths over the years that became the official track. It was a decent walk, but verging towards too hot, 28C to 29C and humid, so I just took it slow and steady. Book said the 10 miles/16km would take 5 and a half hours, I did it an bit faster but don't feel any pride in that. There wasn't anything remarkable about this section, some views, a few new flower types, a few more closed bergeries, a couple of lizards doing it on a rock (so that's how they do it.) 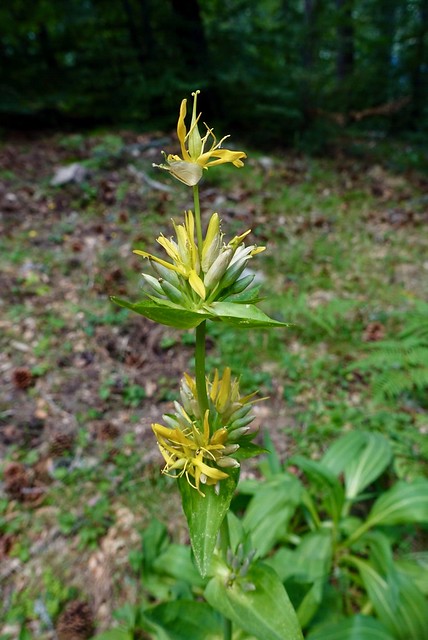 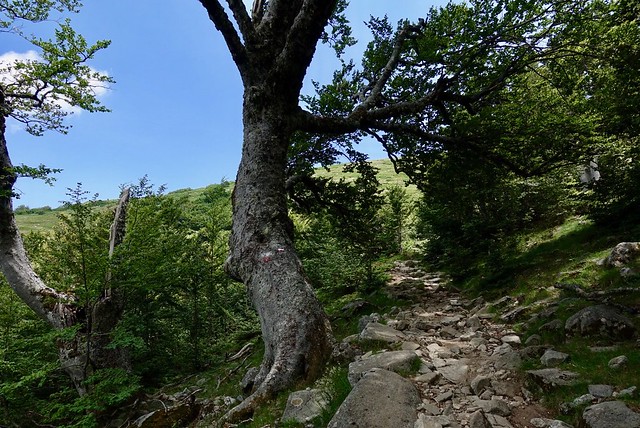 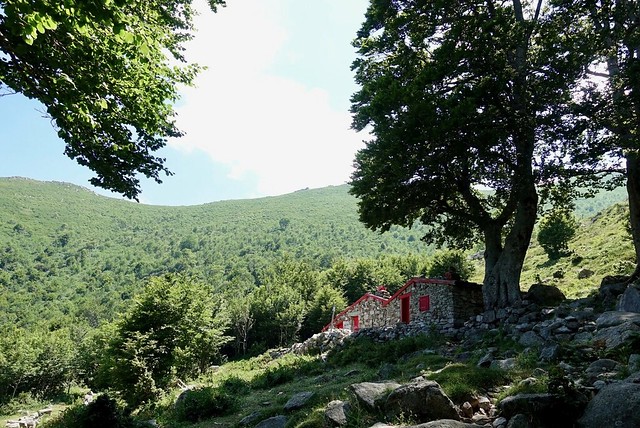 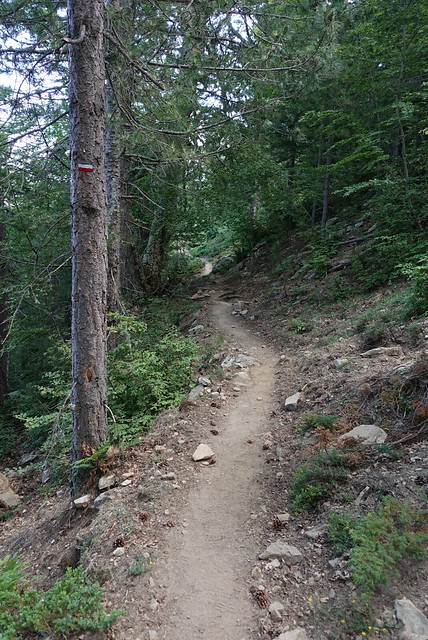 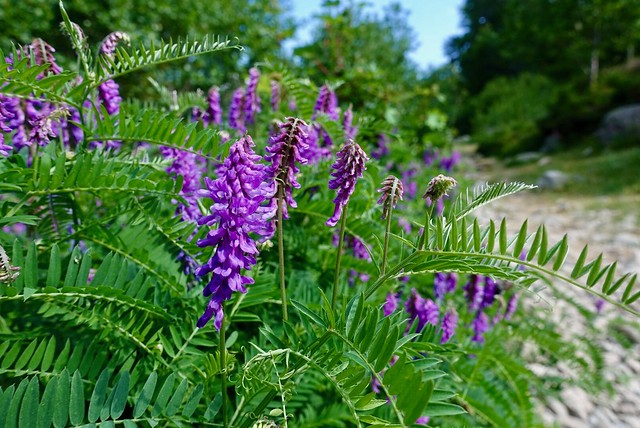 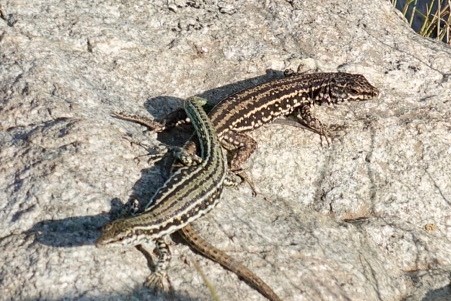 As I approached the refuge it wasn't totally obvious where to go. There was a refuge, a gite, and two bergeries, and signs saying "go this way" or "go that way" when I got to a paved road. Book wasn't explicit either with a "you can take either way and come to this one first then the next". Which one is better? 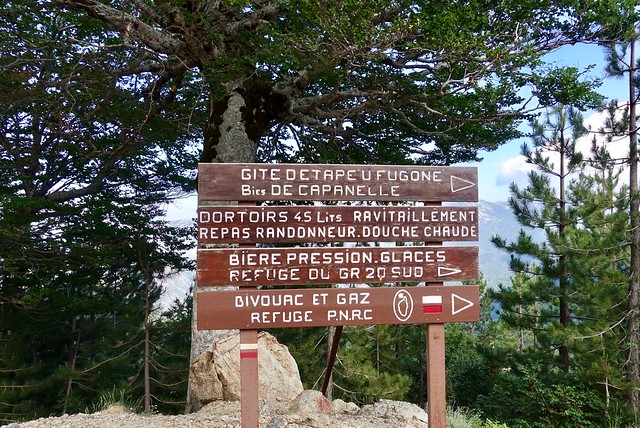 It was 5pm and almost too late to get on the dinner list, so I just followed the markers down and found Gite de Chapelle, a ramshackle clump of buildings, and signed up for repas (dinner). 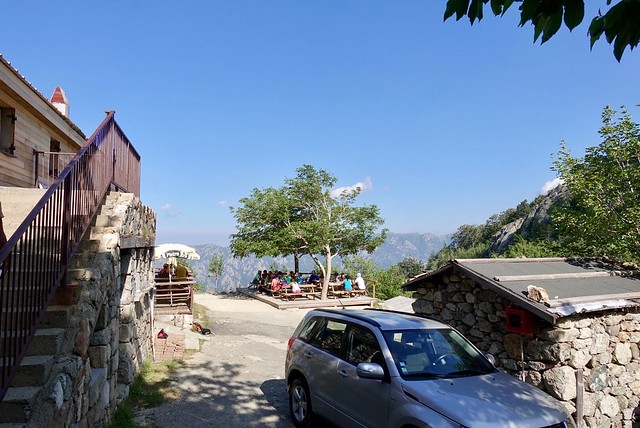 Dinner was passable--the pasta veggie soup was great, the cold polenta slabs with beef chunks was not particularly tasty and caused consternation amongst the French speakers at the table; they sent it back to the kitchen to be chaud and not froid. I chatted with a retired 68 year old Frenchman and his wife in bad French and better Spanish; they also are walking south. I hope to be as fit (and stylish) as him when I'm his age. 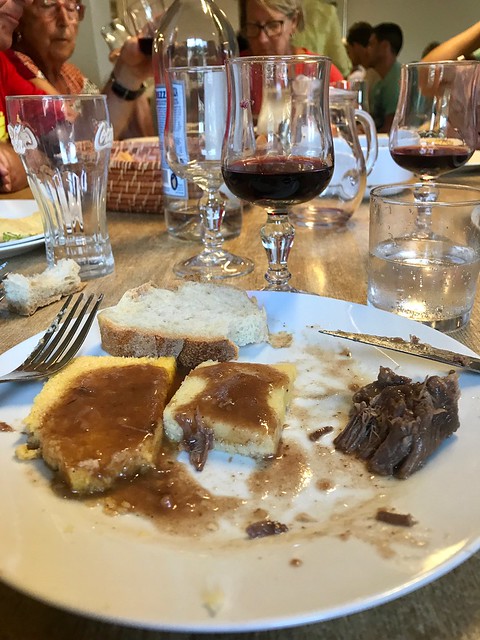 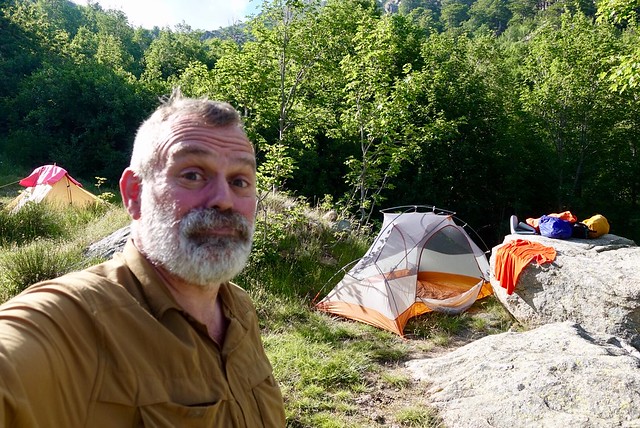 I had set up my tent in a meadow behind three odd ramshackle stone buildings (maybe they're aging cheese in them), had a hayfever attack (boo) and then just crashed at 8:20. Going to see how far I can make it tomorrow, supposedly a 10 mile day which just seems far too short and easy.