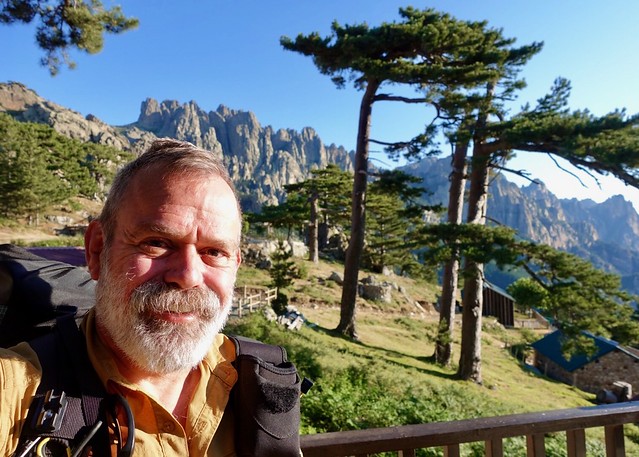 Ah, not too bad a night's sleep in the gite, only woke a few times with the snoring of the other three men in my room, and once for the toilet. It got really hot so I cracked the door, and when I could see the sunlight in the common area, I scooped up my too-hot sleeping bag and clothes and packed while the rest of the dozen or so folks slept. And fortunately, there was zero rustling from the slackpackers (a lot of people sleep in the gîtes and have a tour company forward their duffel bags onto the next overnight, walking with just a daypack... and rearrange their duffel bags at 5am). 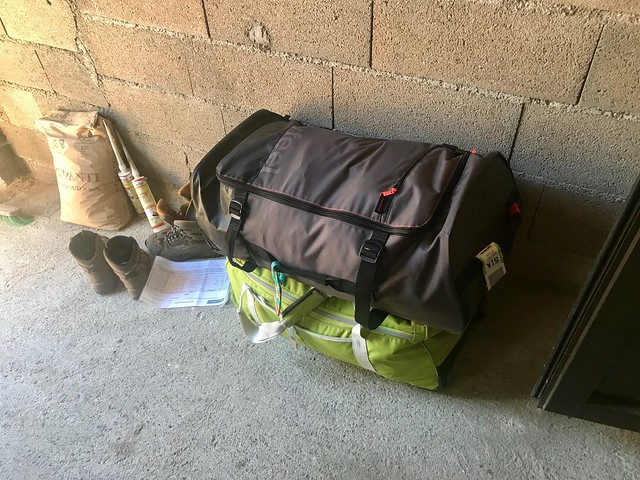 The sunlight on the Aiguilles de Bavella was wonderful, all slanty golden, with a nice up-bounce from the glint off the sea, ahhh, I was already glad I had stopped and decided to take a more mellow day today. After the perfunctory bread-butter-jam-coffee breakfast, I was on my way--and was feeling real peppy. It's just what, 7 hours or 7 miles to Conca and the end of the GR20? No problem.

The first two hours were wonderfully mellow, shady in the pines, with only a slight annoyance of a Foce to get over, and a little treat of trailside strawberries that might've been raspberries. 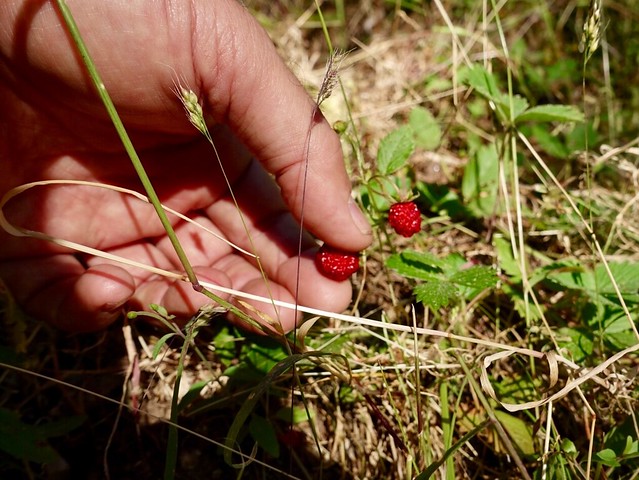 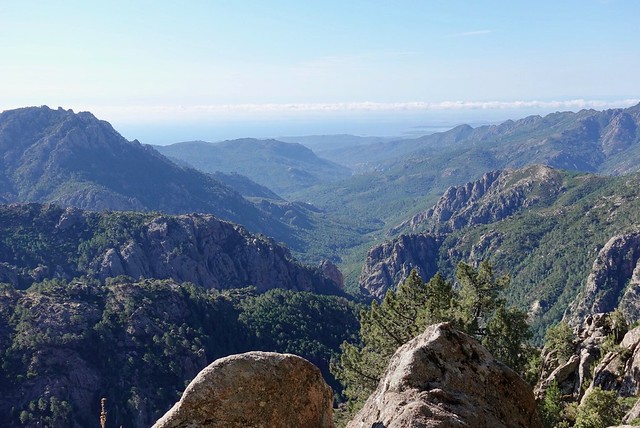 I stopped at Refuge Paliri before they closed for the morning and had myself, yes, another Coke; I was already a bit sweaty but felt really good; I blame that on the caffeine from the coffee :-)

From Paliri (elevation 1230m), I expected a mostly downhill walk to Conca (elevation 330m). Yeah, it was--with enough uphill interjections to be annoying. There were some new flowers--yellow rockroses and pink heather--and curiously large ferns along the couple of streams--but it was mostly a day of walking through granite pine scrub, like walking around Lake Isabella or the far southern Sierra or Big Bear, just hot and dry and dusty. 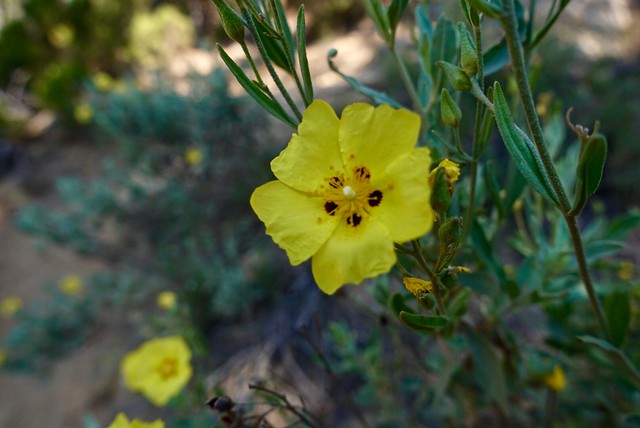 Cistus along the trail 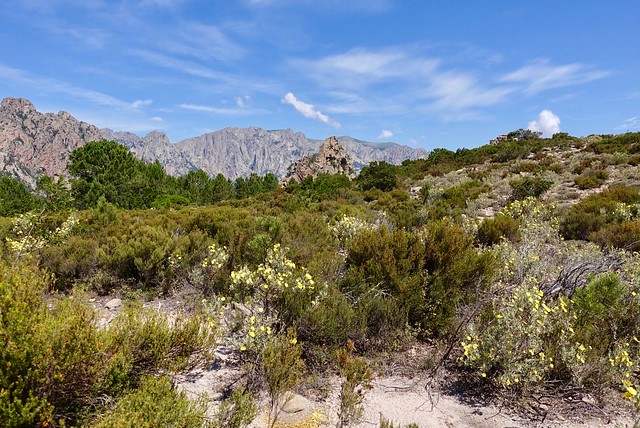 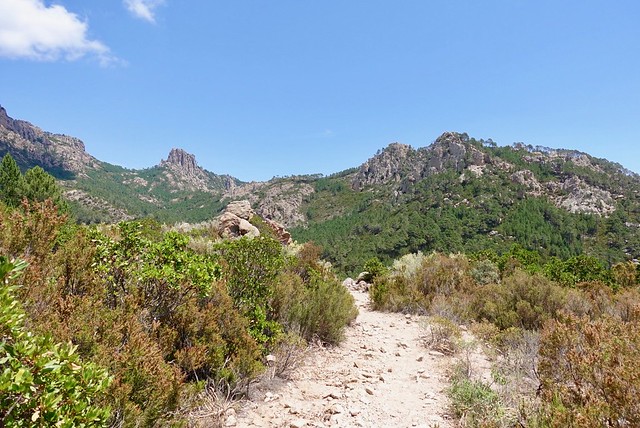 Arbutus and Erica and Cistus scrub 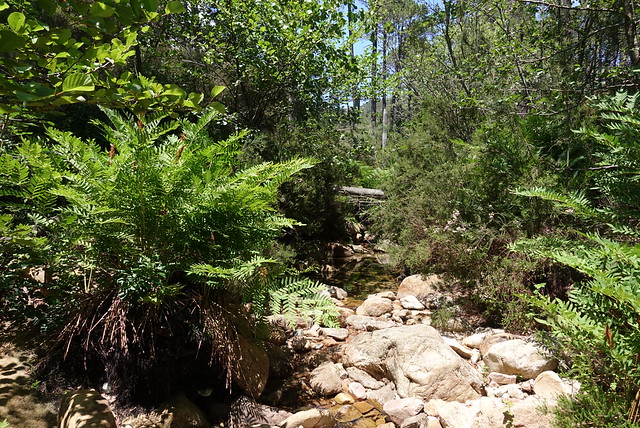 Giant ferns on the 'river' 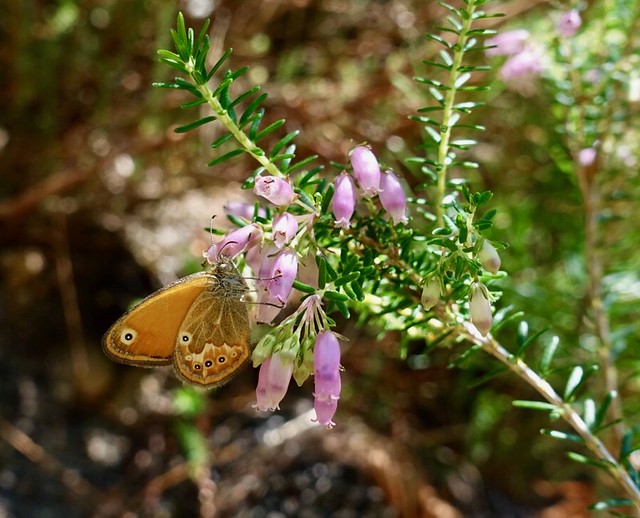 The only saving grace were a few wonderful views past crags that looked like they were from Big Thunder Mountain or Bryce Canyon (with nice white sandy beaches visible in the distance, weirdly), but even those disappeared as the trail got lower and hotter. 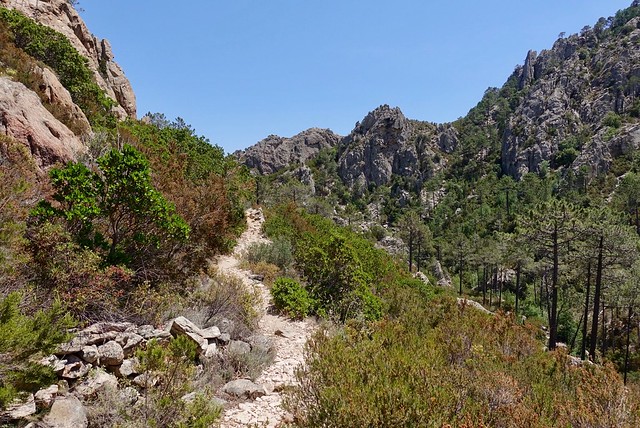 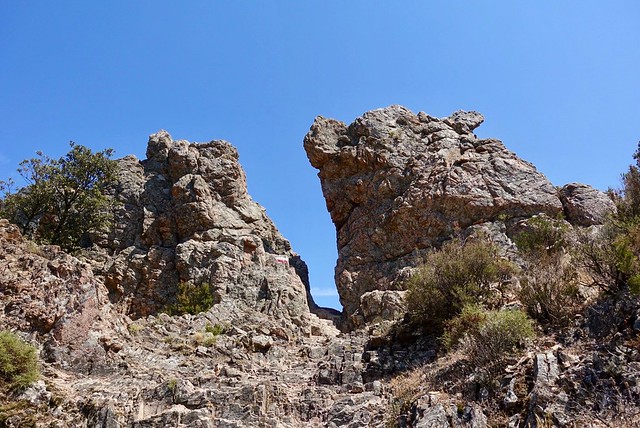 The 'gate' to Conca 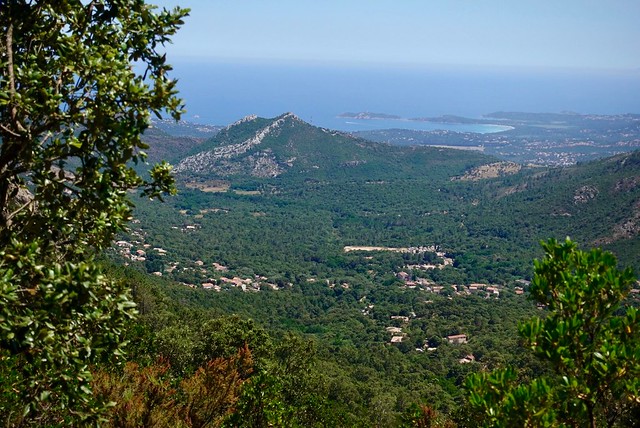 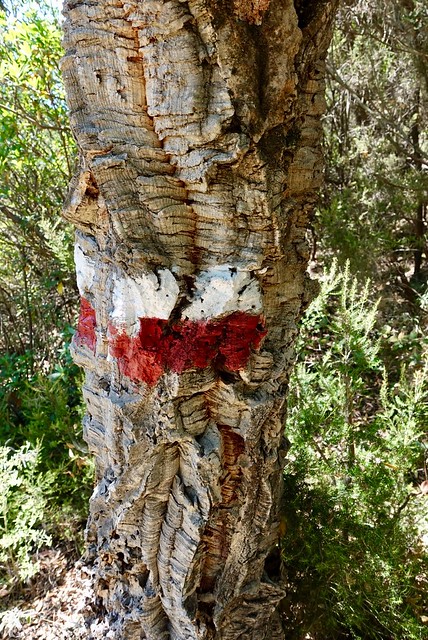 GR20 marking on a cork oak 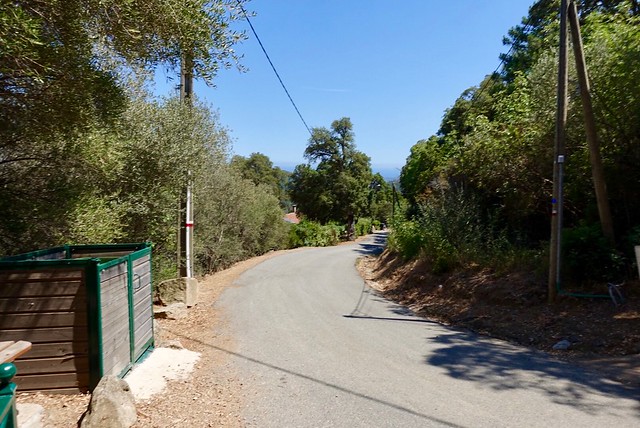 I was getting hot, the temperature climbed to 30C/86F, and I did spot some water source in the book... so II wandered some 100m off-track to find that 'handy little water source' to find it a gross orange-colored trickle of water. Uh, no thanks, so I went antoher 20 minutes to a "river ford" that I stepped across, and used my water scoop to fill up 2 liters of water that I filtered. It was the first and last time that I really used my water filter on this trip, and I was happy I lugged it along, I cameled up with a full liter of that freshish water for the walk to Conca.

Now mentally I had this idea that "first river crossing, second river crossing 15 minutes later, 10 minutes climb uphill, then 45 minutes to Conca". Uh no. After that second river crossing there was a steep climb, then something more gradual... then endless contouring for an hour. Really? Argh. Finally I slipped through a notch in the rock, expecting the Gates Of Conca, but no, couldn't see the village until 5 minutes later. Yay, not too far below, and the cork oaks provided wonderful shade. Thirty five minutes later there was a wonderful water source, then a few meters later the track dumped out on what looked like a street in Santa Barbara.

I figured I take my phone off airplane mode, check Booking.com, but there really wasn't anything available except in Porto Vecchio, which I expect is an expensive taxi-ride away. A hotel room sure would be good now, and Google Maps said Hotel San Pasquale is only 300m away, sounds great. I had already seen the signs for 'hotel-pizzeria' and, well, sure!

Did they have 'cham-bras leeb-re'? Sure, they had 'cham leeb', so a wonderful shower and a bit of clothes rinsing commenced. Later I joined a couple (guy and woman) from Frisia, just starting out, and we chatted a lot about stuff. The guy was a craft brewer, and we enjoyed a few Columba beers as we chatted about long walks in Norway and Patagonia and Iceland. Time for more adventure. 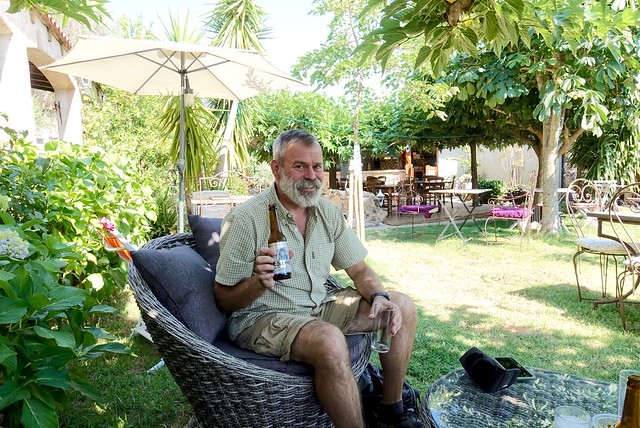 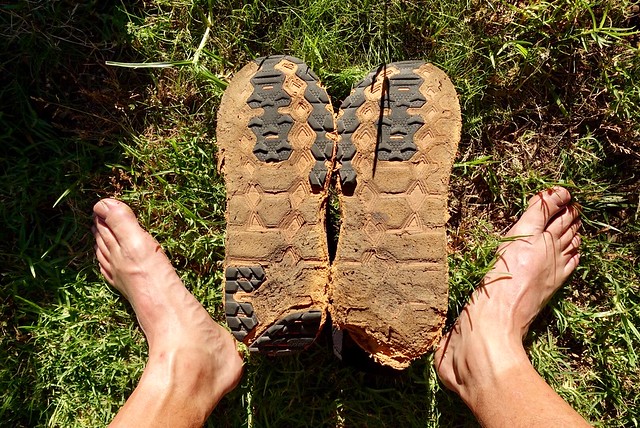 And frankly, it's almost time for pizza--it opens for dinner at 7:30--and I must go get some before trundling off to bed. Tomorrow and Friday are free days; need to arrange a taxi to the busttop and get on with things; I think Ajaccio would be an interesting place to visit (hello Booking.com once again)