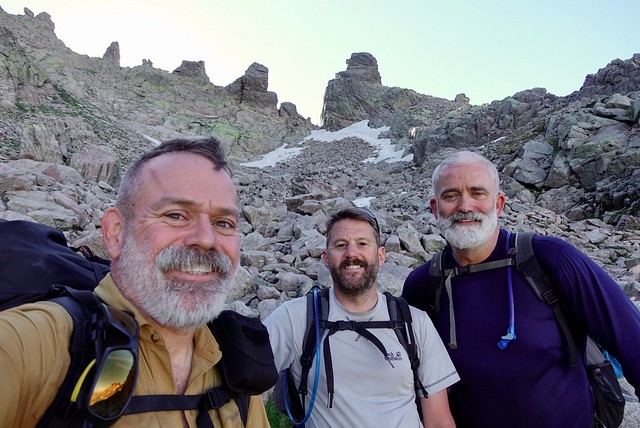 On our way up

We had read the Paddy Dillon book describing today as "another tough day ahead" last night--ugh. Yesterday was kinda perfect, enough exertion and well-designed footpaths with good gradients and interesting things to see. The day ahead seemed to be more of the 'splash paint on boulders every 30 meters'--a climb to 2100m gap, a traverse along a ridge, downhill again to the refuge; the rhythm of the GR20. 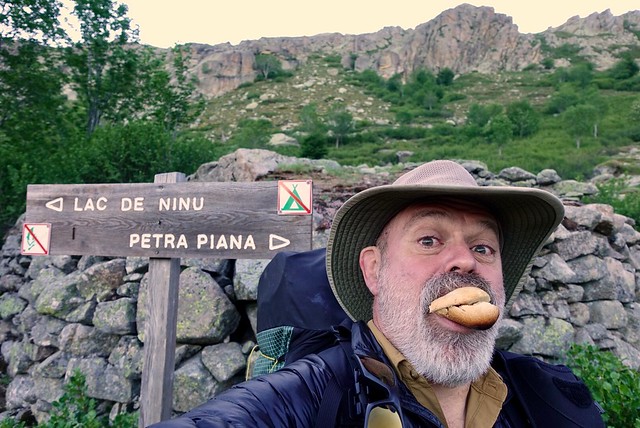 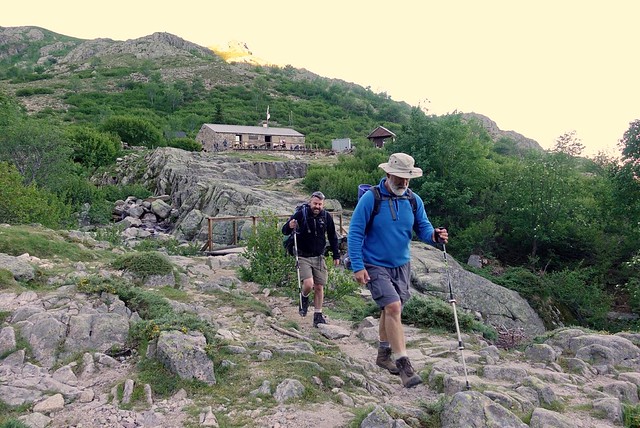 We had learned, though, that it's best to start out early, while the trail is still in shadow, so we were going well before seven. It was supposedly a 2.5 hour trudge up 500m in elevation to a stony gap, with snow lingering, and the mood in the group was somber, a death march, ugh. We hiked up and up, a few pretty little grassy spots, but generally not difficult, no chains or even scrambling. I stopped to take pictures of flowers--the cows didn't come up this high, it seems, so there were more in bloom. 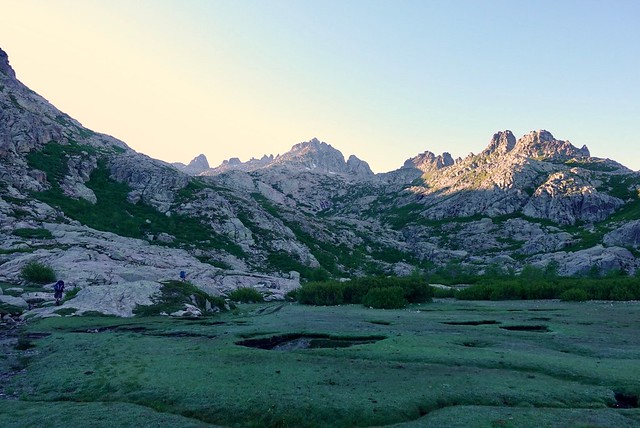 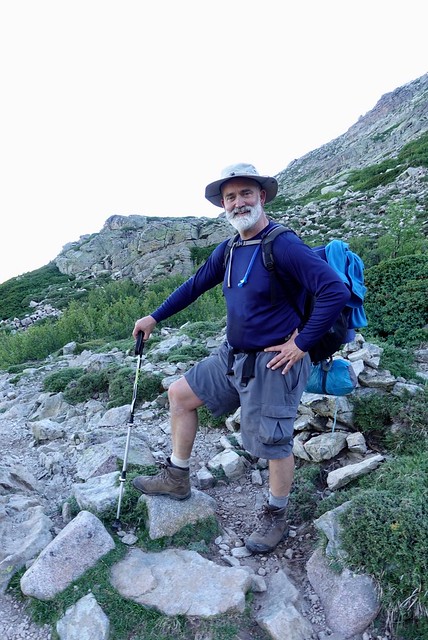 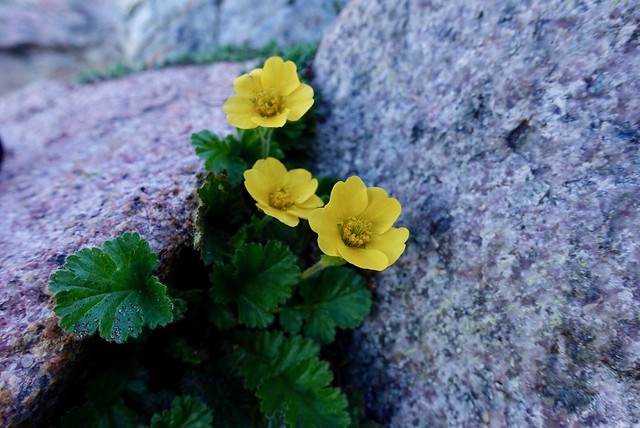 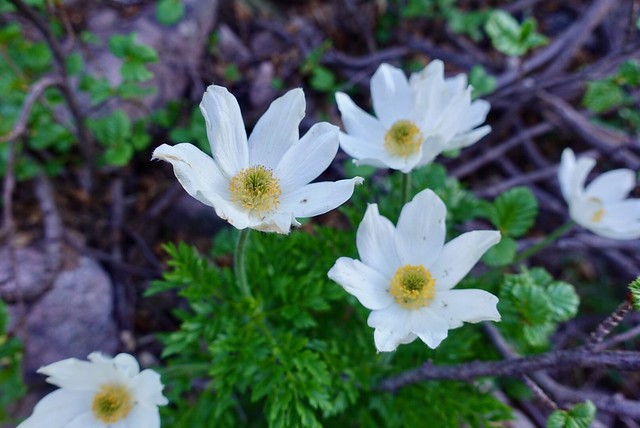 The hikers a few hundred meters ahead of us (in elevation and distance) were really helpful in an odd way--while they showed the way up, they also provided some scale amongst the rocky cliffs. At one point we looked up and it seemed like they were giants, three times life size, as they went along a ridge line. With no trees or shrubs, they were the only real reference, and they dramatically 'shortened' our climb. 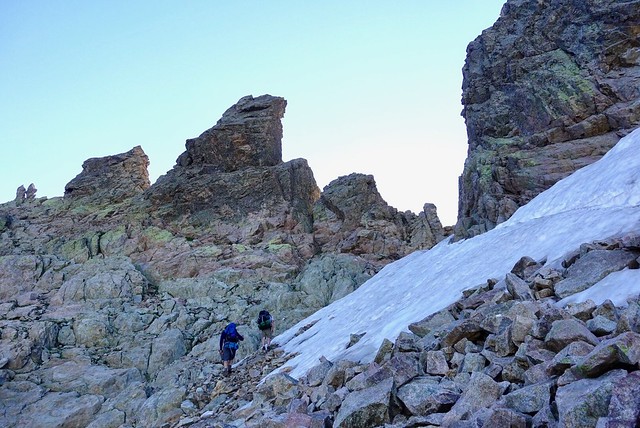 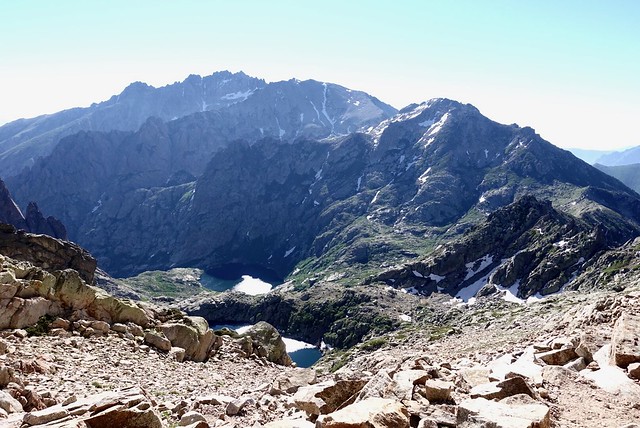 Wonderful view to the lakes

And we had timed our departure just right--the entire trek uphill was in the cool shade, and when we popped out on top we were hit by the sun and a stupendous view down to two lakes far below in what looked like volcanic craters (they were not, just steep-walled cirques), and a ridgeline extending south to Yet Another Scenic Snow-Streaked Mountain. Our mood had also vastly improved as well, we were chipper and upbeat and really damn happy, so we took a long break and watched the fluffy crow-like birds see how close they could get; Jon had them eating out of his hand. 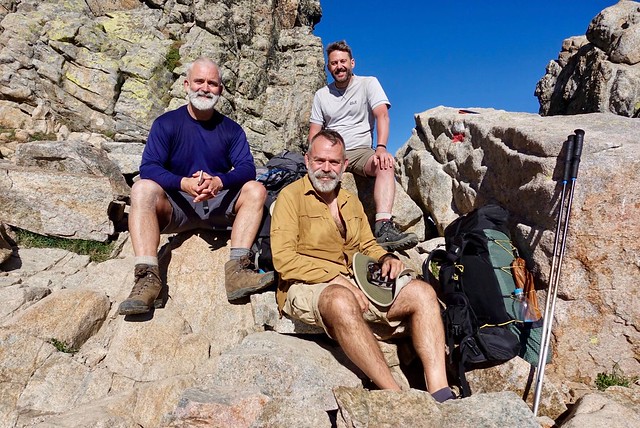 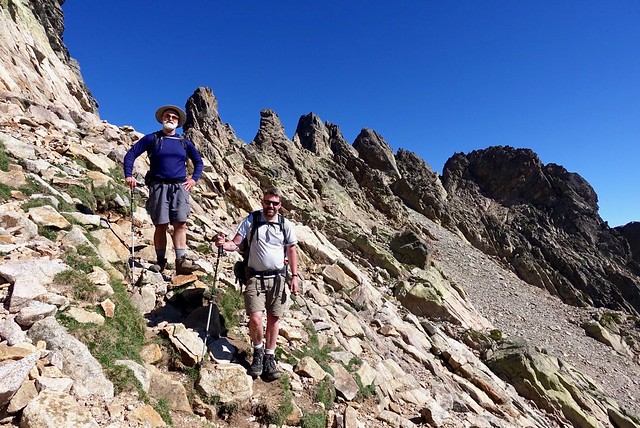 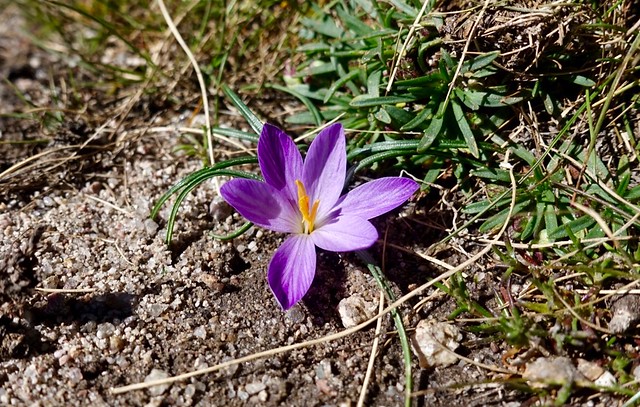 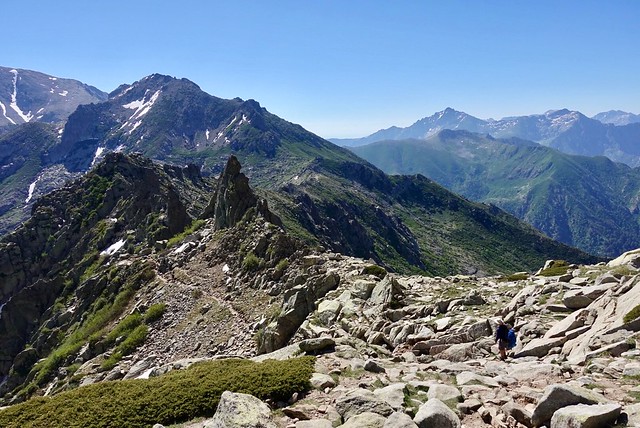 Trail along the ridge

From here it was more walking along the ridgeline, a tiny bit of scrambling, then a chain down a 5 meter crevice. Ugh, I don't like chains, I always feel like I'm going to fall off, and going down is bad. Yes, I know I can just to the rappel/abseil trick of leaning back and bending at the waist and extending your legs so my feet are flat on the rock, but it feels wrong, particularly with a 9kg backpack on. I eventually made it down, but Do Not Like. 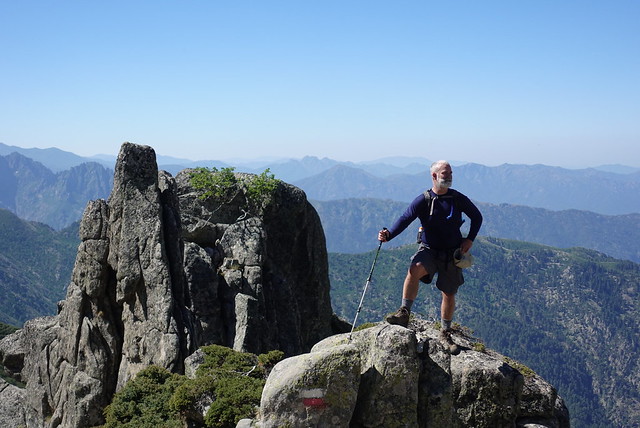 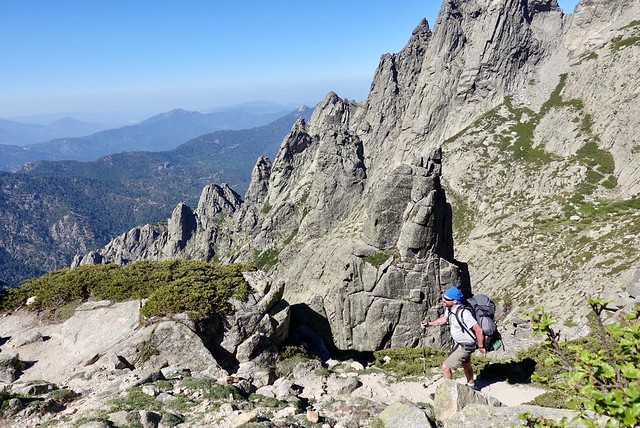 After a stop for lunch, we continued along the ridge, then decided it was Mars Bar time when we got to a patch of snow, plunging the chocolate goodies in to freeze up before devouring them. 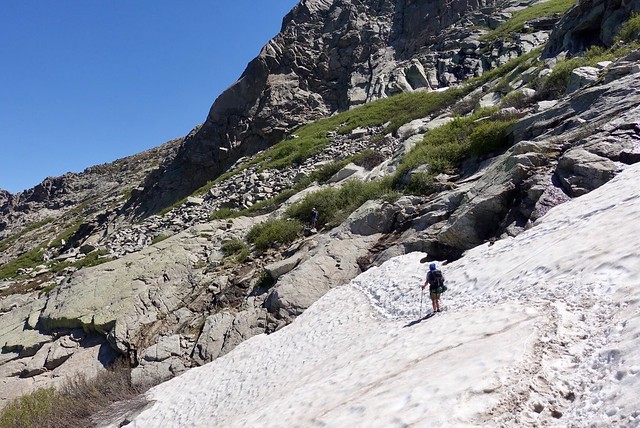 A bit of snow 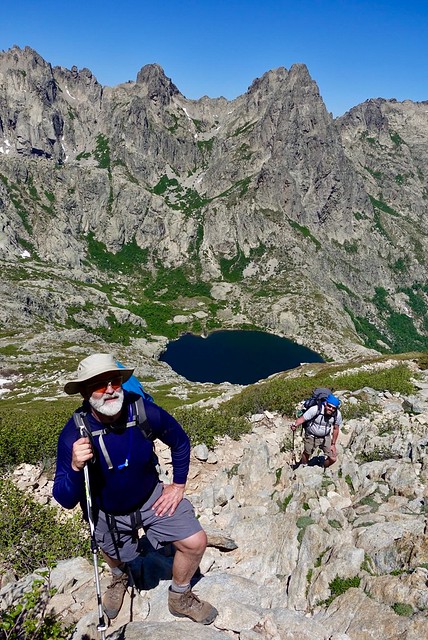 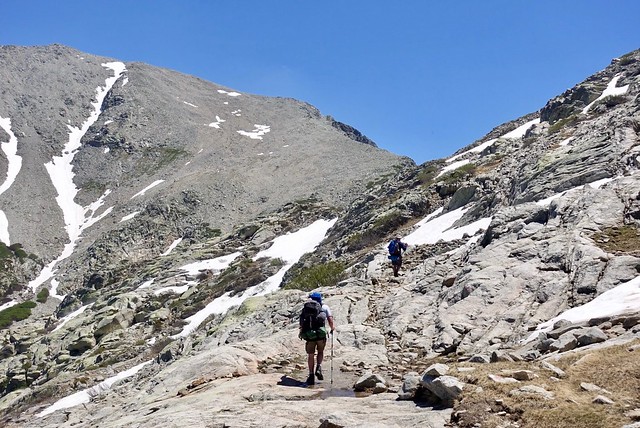 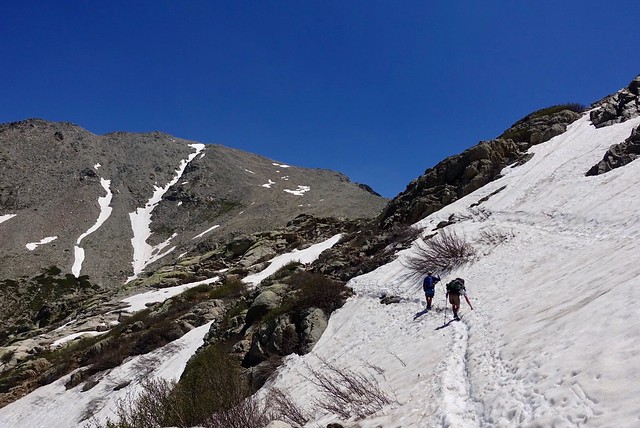 A short traverse across some compacted snow, then down to the refuge, a moderate descent followed by several hundred meters of steep descent through alder scrub mingled with a soggy stream, not that much fun at all. 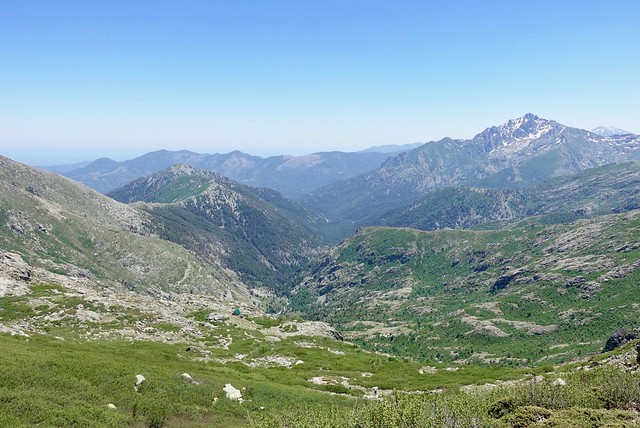 The refuge was tiny, with a tiny kitchen, and a thirty person long table adjoined to the shop/guardien's quarters. We booked dinner and breakfast, had a few beers, took a dip in the waterfall behind our tents , and napped. After the nap we wandered back to the tables, and found two tiny black kittens frolicking about. Supercute! OMG they must've been six weeks old, just playing with each other and impassively loving the attention from everyone. 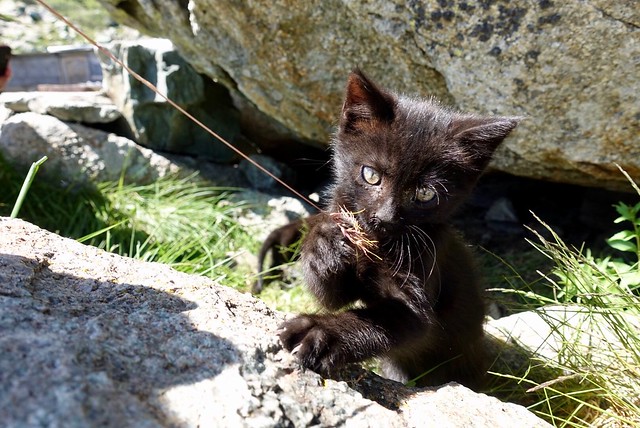 Dinner was very enjoyable--we each got a few pieces of bacon (in French, the word for bacon is... bacon), and a delicious lentil stew with bay leaves... mmm it was so good I can't even remember dessert. 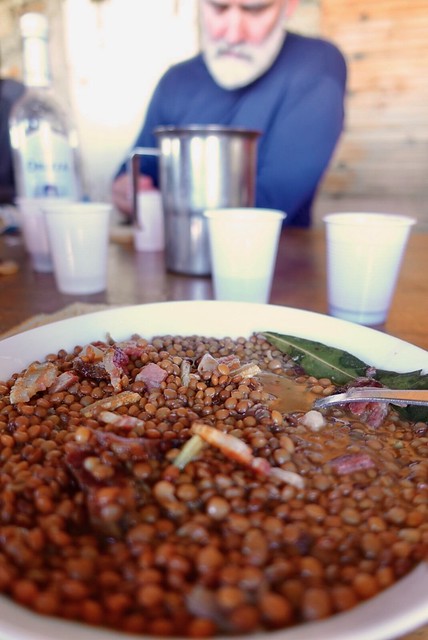 David and Jon were planning their escape route as welll--they were eager to get to the villa and have a proper holiday (as opposed to this masochistic exercise), so they spotted a thin dashed line and said 'that'll do' and texted their other halfs a PDF with some D-lettered number road with 'can you pick us up here?'. I was dubious that this plan would work--could they figure out which saddle to cross over? was there really a path there now? can the rental car make it up that dirt forestry road far enough? is there mobile coverage in that steep canyon? and made mental notes for where to send the search-and-rescue parties. I spit out a few screenshots from that Gaia GPS map app I have (super-handy, I really recommend it, I use the OpenHikingMap HD layers to see trails and contour lines and shading) and AirDropped them to David's iPhone. (see, technology doesn't ruin everything!)

I'm intending not to go with David and Jon, but to follow the GR20 to Vizzanova. It's five hours to the next refuge, and then another six over the mountain with an ugly 700m ascent, before the track drops down the railway station. Maybe I'll combine the two stage but I doubt it--the train to the villa leaves at 4:33pm, and that means leaving at 6am. I'll take it easy, and maybe take a later train to Corte (the island's capital in years past) and get an inexpensive hotel room; Booking.com has several in the 60 to 80 euro range. A nice bed and a shower and a 'do nothing' day sounds great; after seven days on the trail, my body is telling me it's time for a big old fat zero day.