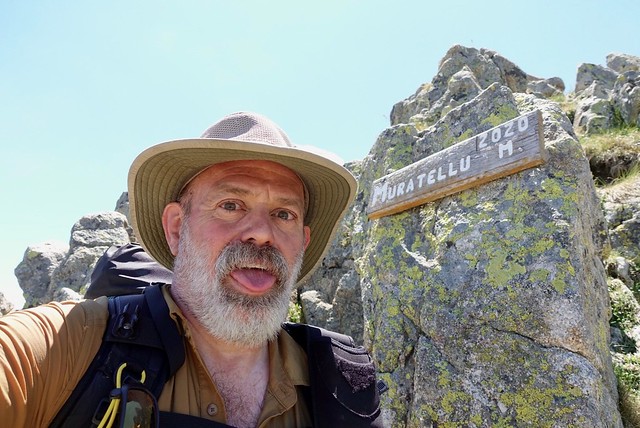 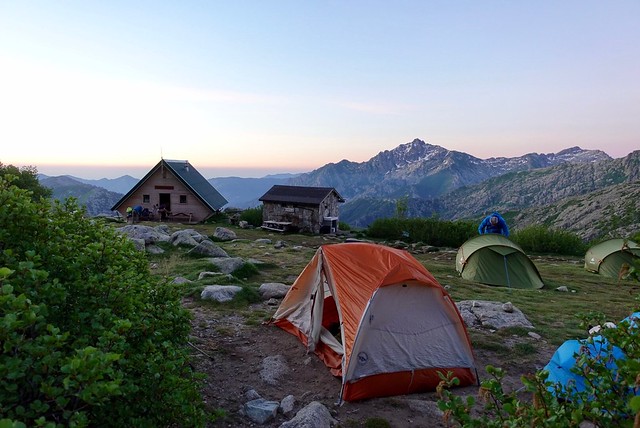 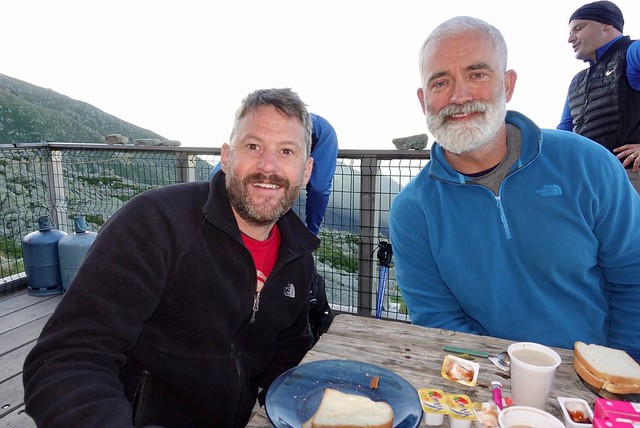 Well, today's the day we split up. After a particularly sad breakfast ("here's a loaf of bread, six fruit jams, three butters, and a generic Casino-brand loaf of bread still in its package"--why do we even pay for breakfast? That's not worth 8€)... we're going our separate ways. Dave and Jon are gong over the hill and out, I'm continuing on, so I scooted down the hill just past seven. Plan for the day is to take it easy, enjoy a lunch at Bergeries de Tolla, then camp at Refuge l'Onda... and head over the hill tomorrow to the villa. 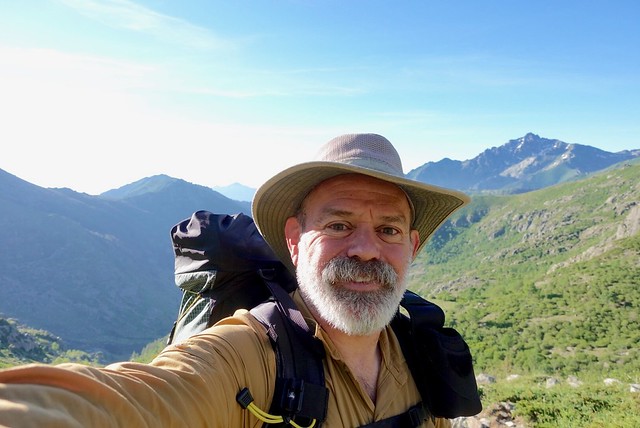 On the trail, solo

This was described as an easy day, with good forest cover, and after scampering down what the book described as either a "rocky" or a "stony" slope (is there a difference?), past a closed bergerie, the track got much easier, strongly reminding me of some east-side Sierra trails, say North Lake/South Lake out of Bishop, except with gorse/broom instead of sagebrush. Oh, and the occasional rambling rose bush too. I did spot some columbine flowers that surprised me as well--a pale lavender color, with shorter spurs than their North American cousins.

Another type of lizard 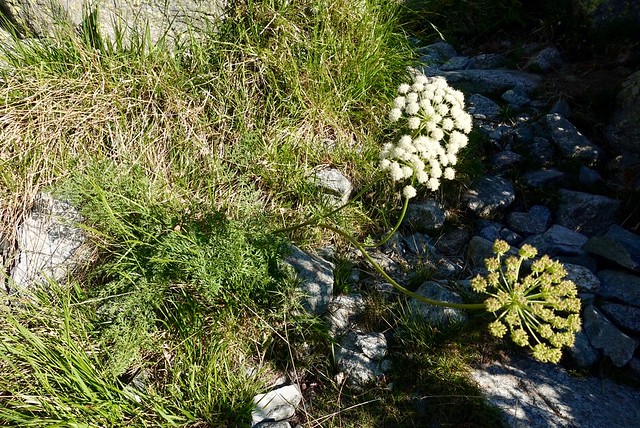 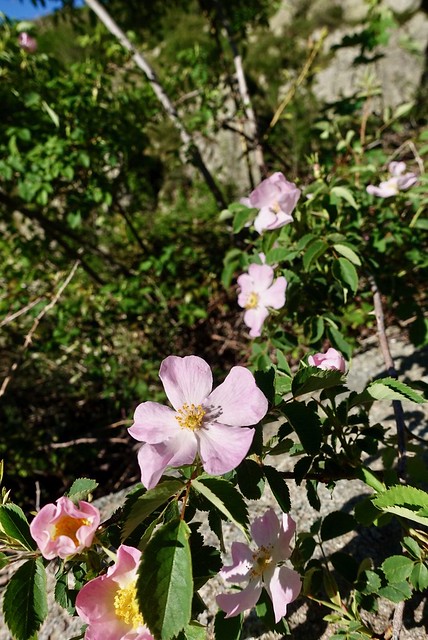 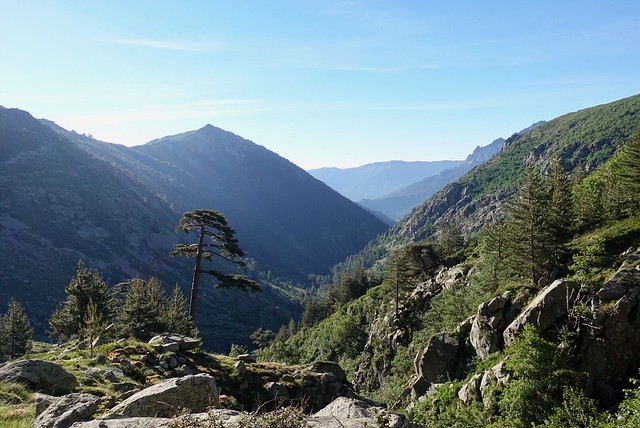 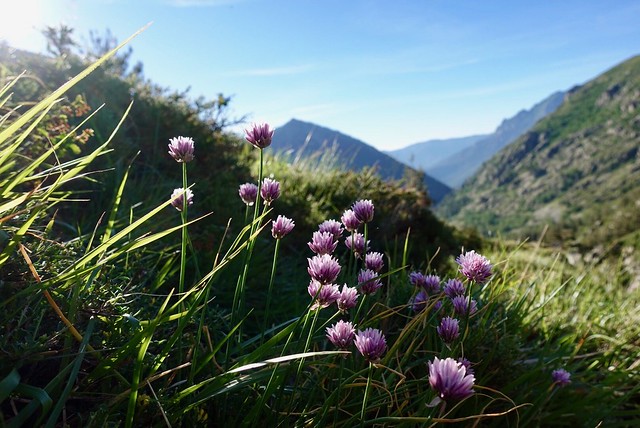 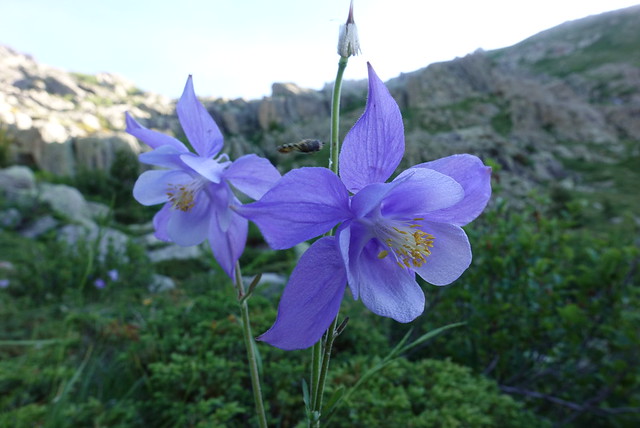 It didn't take to long for the track to head into the forest cover, and change from a difficulty level of 6 to a 4 moderate to a 2 easy--flat and level with a smooth dirt surface. Whoa, that was a shock, what the hell but I'll take it, and I started striding things out, walking a 17 min/mile pace (about 5.5km/hr), it felt really good. 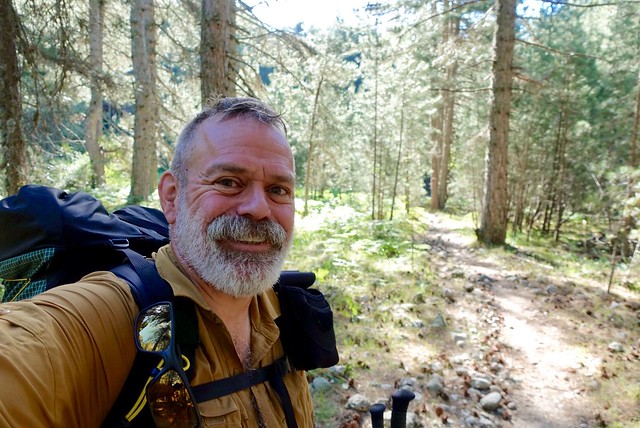 Ridiculously easy walking, for once

Suddenly my lunch spot at Bergerie de Tolla appeared just after 9am, an attractive little clump of picnic tables under walnut and cherry trees, with a shopkeeper sweeping up and perparing for the day's business. 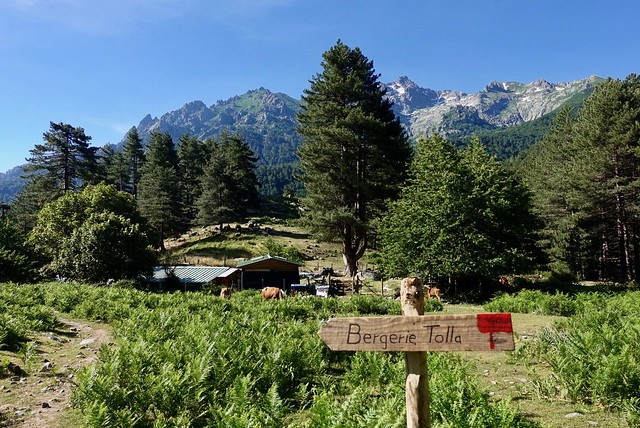 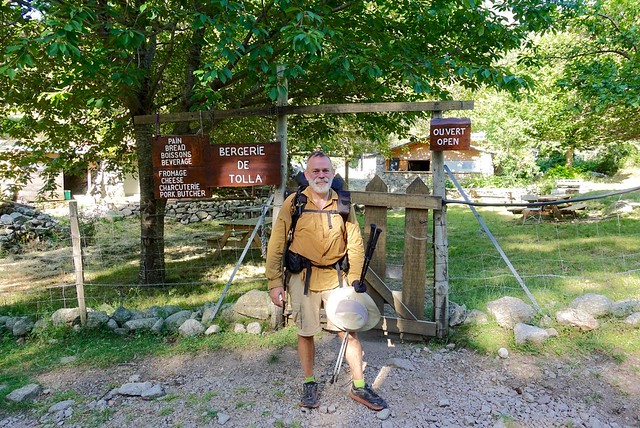 He switched to English after finding out I was from California, and he remarked that the weather these past few days was fantastic (I agree) just like California. Nice sales pitch :-) but I would've bought some of the saucisson even if he didn't butter me up like that. He did say he was a bit worried about bushfires--this hot this early in summer is not a good thing--and he said it's been very hot along the coast, causing my mind to drift off to a villa and a sparkling swimming pool.

At this point I was thinking "Hm, how far is it to Vizzanova? Can I make the 4:30pm train to L'Ile Rousse? Is that even possible?". A quick glance at the book says that tomorrow's walk takes six hours from the Refuge l'Onda. Hm, if I make it there by, oh, 10:45 or so I think I'll go for it. 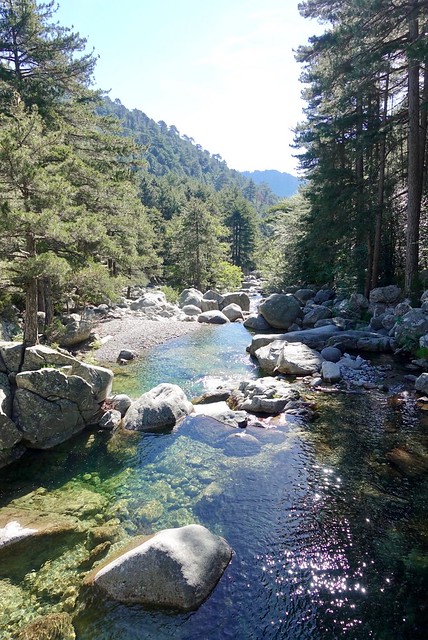 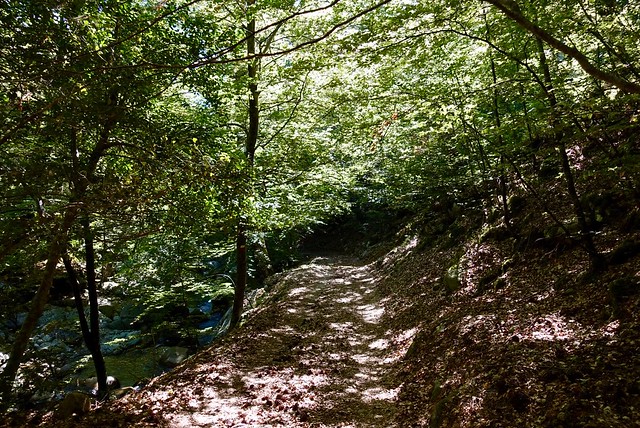 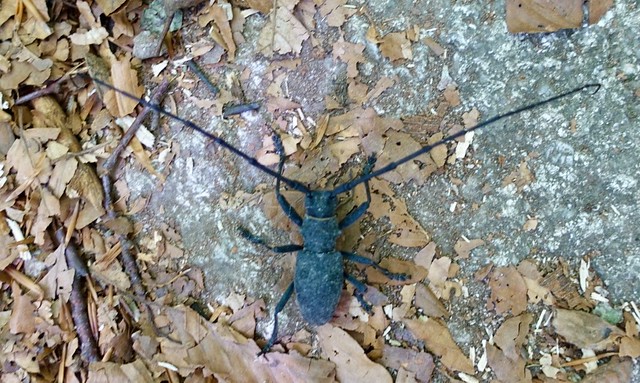 The track went down to the river, then strongly uphill through a suffocating beech forest. Sure, it was shady, but the air was humid and stagnant, and the trail was covered with roots and leaves covering slippery roundy rocks. Feh, not my type of walking (and the type of trail I'm guessing I'd suffer through for a thousand miles on that Appalachian Trail, feh, no thanks). 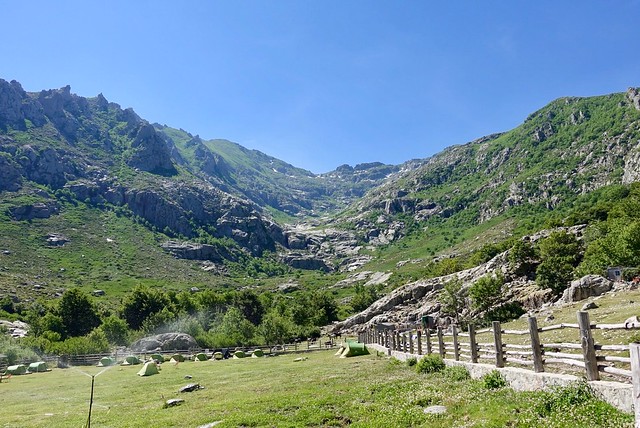 I made it to the Bergerie l'Onda at 10:36; the campsite was a large grassy paddock with a fence to keep the cows out, set on the valley floor with snow-covered peaks above. It was hot too, no breeze, and I slammed a 3.50€ Coke down and put a Snickers bar in my back for later cravings. I'd had stayed longer, but three hipster backpackers (one female with a flouncy skirt and green leggings and two male beardies in Williamsberg straw fedoras) were having a heated discussion about Wonder Woman in in French (didn't they localize the words "Wonder Woman" like they did in Spanish to "Marviella Mujer") and did not grant me any of their shade, which they reserved exclusively for their three backpacks and themselves, of course. I crushed my Coke can convincingly and left. I don't need them when I have a pool to get to. 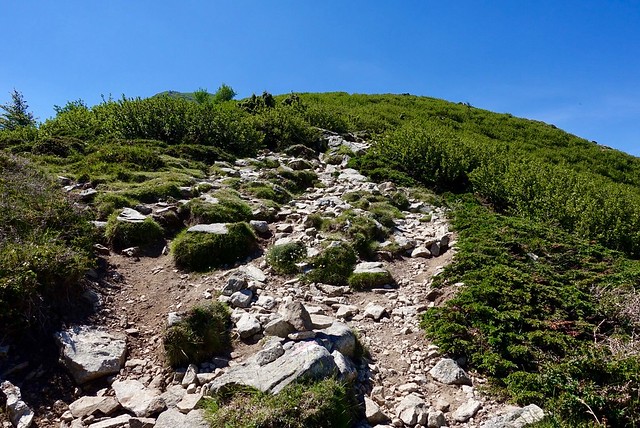 Up up up to the ridge

I powered up the ridgeline, leaving the valley, and a wonderfully cool breeze washed over me from the west. Ahhhhh, I watched the temperature drop from 25 to 19, greatly appreciated, as the track just kept on going up and up and up, heavily eroded an a 30 degree slope. I diverted and walked alongside the track, dodging the cowpies, much easier walking. 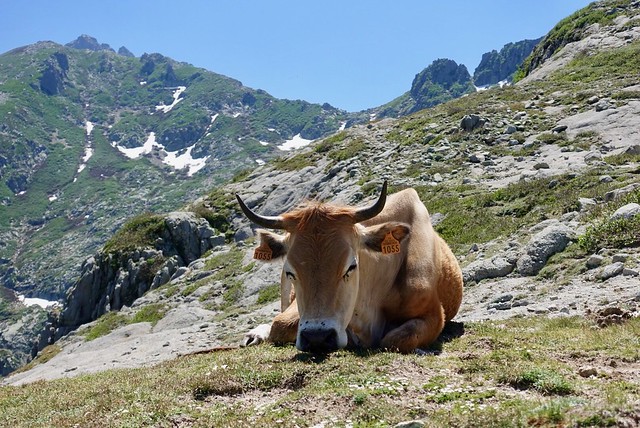 There wasn't much respite on the way up---just a small quasi-level bit with two cows lounging on the grass--and I was feeling spent but not exhausted, getting that rare deep aching in my leg muscles that told me I was really pushing things and should at least eat something. I rummaged around and wolfed down two breakfast bars I'd forgotten about, and then boom, hey, I was at the top, where someone had planted a little festive pinwheel that cheered me up. 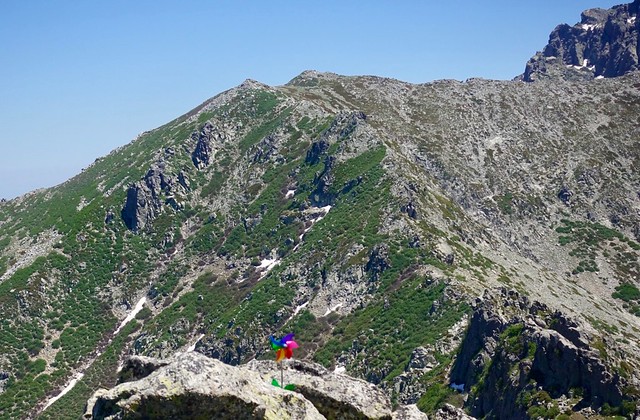 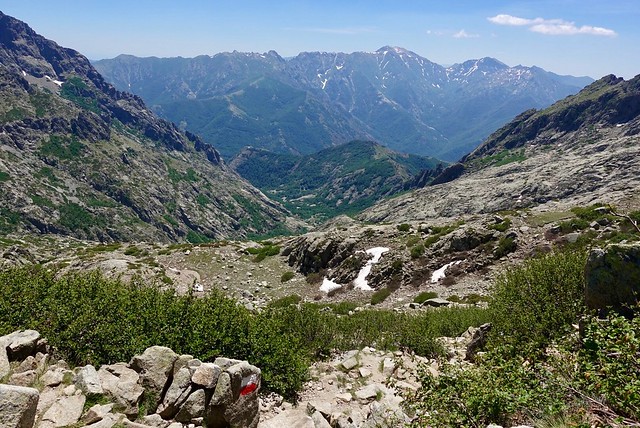 OK, time to go down once again. Nothing remarkable, though the trail got more and more clogged as I got close to the Cascade d'Anglais, a swimming hole/waterfall. Some of the groups I passed were huge, thirty people, twenty people, speaking a variety of languages, and I scampered around them, earning a "how rude" from some British lady, so I threw out a barrage of "merci, merci, merci" and kept on going, hehehe. At the Cascade Bar at 3:45 I realized I was going to make the train, whoo hoo, and I coasted down the easy wide forest trail to Vizzanova station, grabbing a ticket to the stationnear the villa. Total distance hiked: 23.35km (14.5 miles); elevation change 1160m (3800 feet). 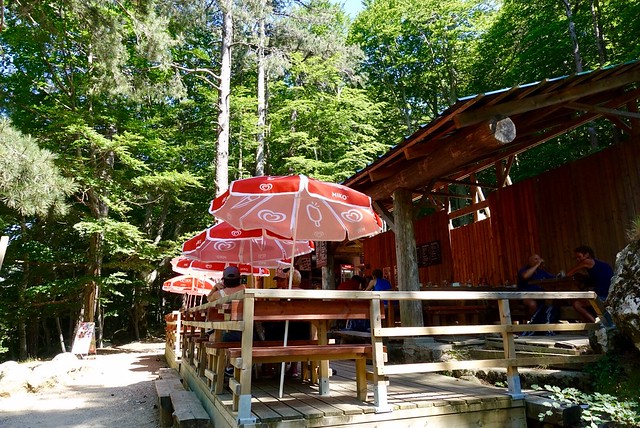 A bar on the trail! 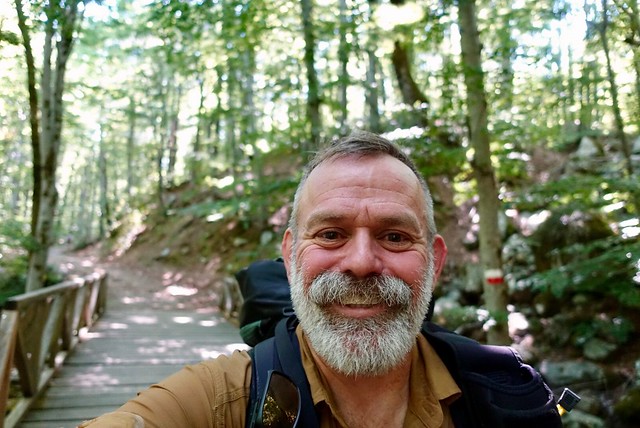 Happy to almost be done (for now) 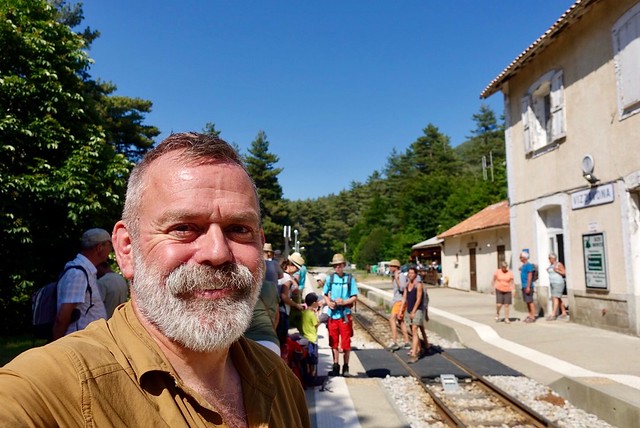 The train was packed, I was stinky, but I didn't care--and I wasn't the stinkiest one either, many other daytrippers were dripping sweat. Most of them got off at Corte, and looking around I was glad I didn't spend too much time there, a town with social housing apartment blocks with its back to the steep mountains. Perhaps there's a charming part of town, but you never see those from the train stations. North of Corte, much of the countryside looked empty--large flat empty fields with a clump of shrubs or trees and a ruined house, some odd mechanical rusty thingies, rock walls on the slopes that once must've kept goats or something but now only enclose scrub and (weirdly) agaves with their strange towering flowerstalks. At Ponte Lecchia I changed trains, then an hour later disembarked (at the beach!) on L'Ile Rousse, after passing through dry, barren, granitic countryside that looked a lot like the Valle de Guadalupe in Baja California.

Philippe picked me up (yay, thank you) in a very gadgety Citreon C4 with a windscreen that ended somewhere over our heads, Paul cooked up a fantastic BBQ, and the champagne was poured to celebrate David's 50th. Ahhhhh, I felt like going in the pool, but nah, there's always tomorrow, and the next, and the next. Better to just sleep. It's been a long day. 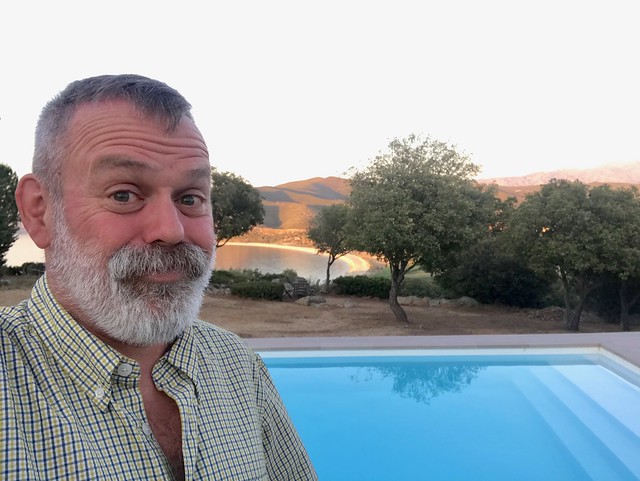 I'll jump right in, after a shower