Whelp, at 5:30am sharp David was up and out on the picnic table out in front of our cinder-block cell (I mean gite), time to doze some more. The curtainless window in the door faced east, so we were unable to escape the evil sunrays, but at least we (meaning Jon and I) could exchange glances and turn against the wall and hope for another thirty minutes of rest.

Yes, it's David's 50th birthday, his very special day, and the messages are pouring in, even over the weak 2 bars of Edge mobile service. At six o'clock we threw in the towel (though there were none) and showered and straggled over to the hotel for the standard bread-butter-jam-coffee breakfast. What was worse was that it was cafeteria style, with trays and everything, so there was little chance of pilfering anything for a trail lunch later. They knew us.

We were warned it was an easy day, and we headed out around 8am, dodging a herd? gaggle? clutch of pig... down a wonderfully built track, smooth and fast with gentle gradients, through forests of pine and beech. 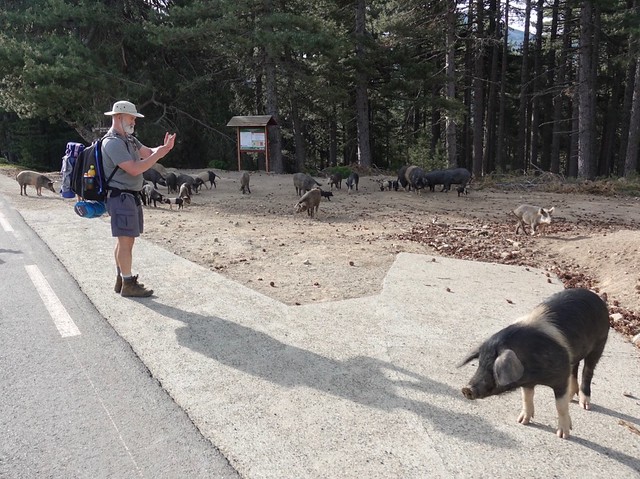 Piggy start to the day 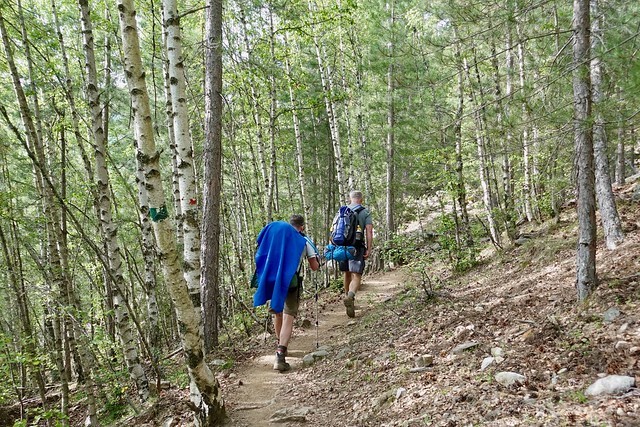 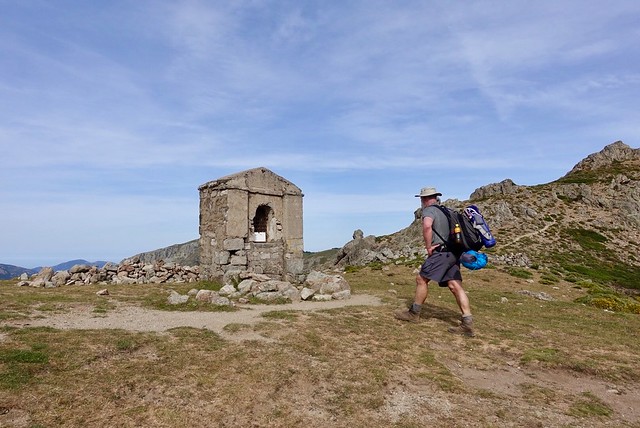 It was wonderful for two miles (ahem, 3km). Then a straggly climb to a gap where the winds blew from Westeros, with a little shrine to some demi-god, under a pylon to the god of lightning, and up some more; the track continued to be evenly inclined despite the best efforts of the GR20 hikers to circumvent that by engineering their own more direct routes up the slope. Really, who could blame them--after being trained that you could gain 10 meters elevation in 5 meters of horizontal progress, why should we settle with a mere 4% grade? That's for donkeys, and we passed one on the way to the top of the little ridgeline.

I was feeling peppy as I crested, and saw that we had another up-and-down traverse overt to the top of another Bocca, but I didn't particularly care; I was striding out like I hadn't done in a couple of years, like this was some descent into Tehachapi or Castella or Etna, and feeling really good. David was certainly feeling the same elation, we chatted about this being just the perfect uphill walk; just about the right level of exertion to make progress but not enough to discourage conversation. I was thinking that's one of the hidden benefits of the PCT: it's hyper-social for what's effectively a solitary activity, but the unintended design of a trail that serves both hikers and equestrians is that it makes it enjoyable for both modes. 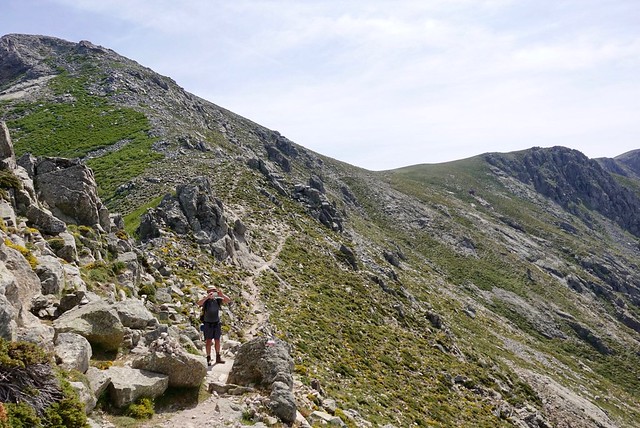 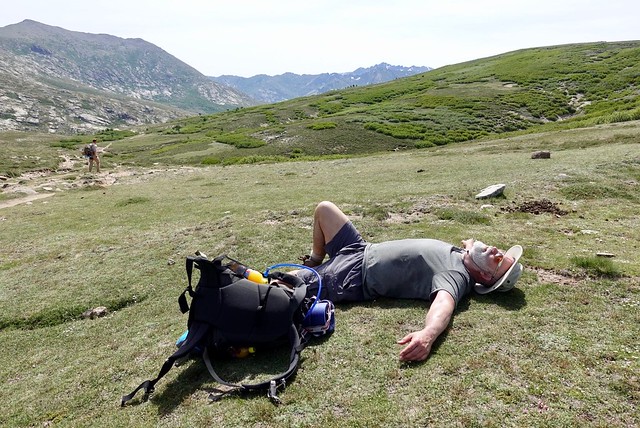 At the top of the Boca, we took a little break, and looked down on a broad valley with a lake nesled in it. hordes of other hikers had followed us up--from this, I guessed this must be a Saturday, and it was--but we left them behind and descended to the lac for a bit of lunch, some Corsican sausage and cheese and bread. David took a swim in the lake (not in birthday suit) and declared it great, except for the weedy bits along the shore. 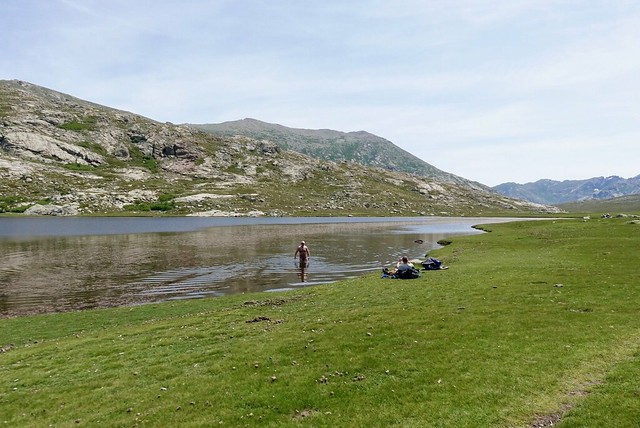 After that leisurely lunch, it was down the drainage, through a bergerie, and across a vaelly to the refuge. Scenic but not stunning, and more hot that I liked--therewasn't a breeze or anything, and the little uphill was irksome. 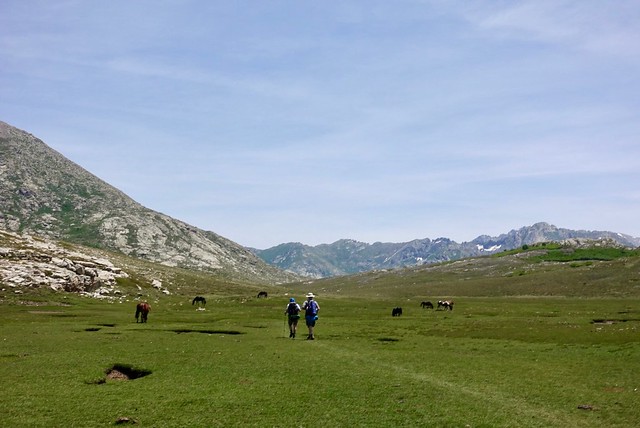 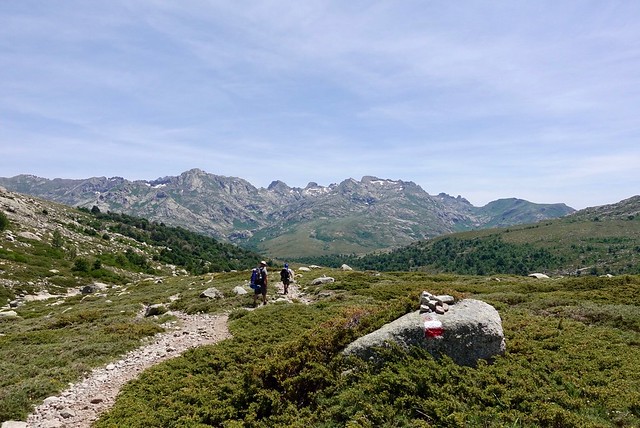 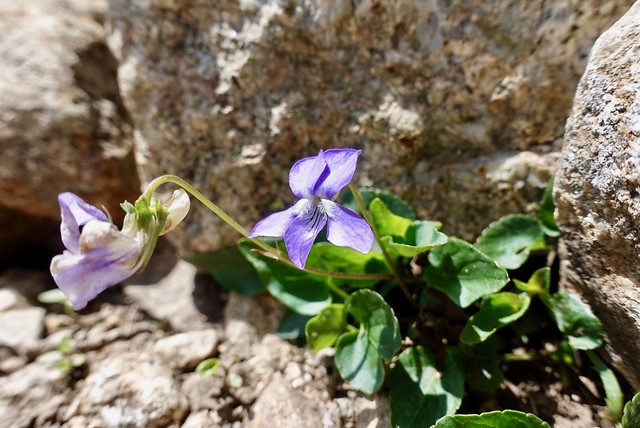 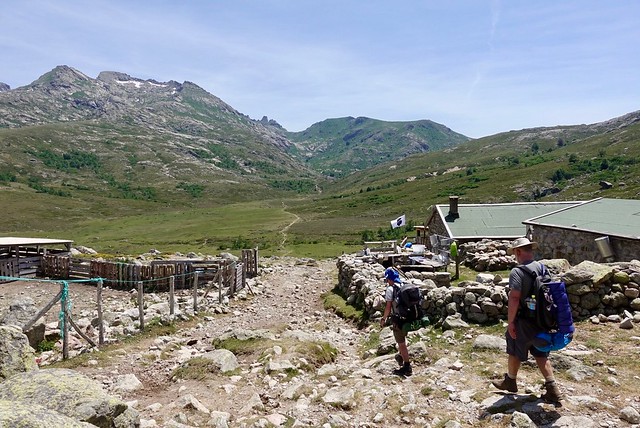 YAB (yet another bergerie)

Finally, the refuge, where we found a good trio of campsites in the alder bushes around 3:-00. 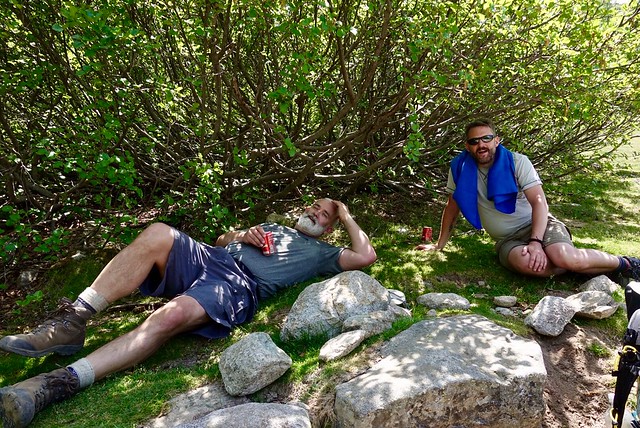 The afternoon was spend just hanging out--rinsing our sweaty clothes, setting up camp, then a dip in the pool under the footbridge to the refuge. I'm such a wuss when it come to cold water--I get into mid-thigh, then gradually get used to it, then finally dunk myself to the neck--and then I regret not taking the plunge earlier, because it's so refreshing when you get out. David and Jon were much more water nymphy than I was; splashing about in the cascades, getting all clean, having a great time. I felt refreshed yet I did't feel like sharing. I just generally don't like being wet and cold, yeah, it's a bit irrational because someimtes, on a hot dusty day like today, it's excatly what I enjoy. 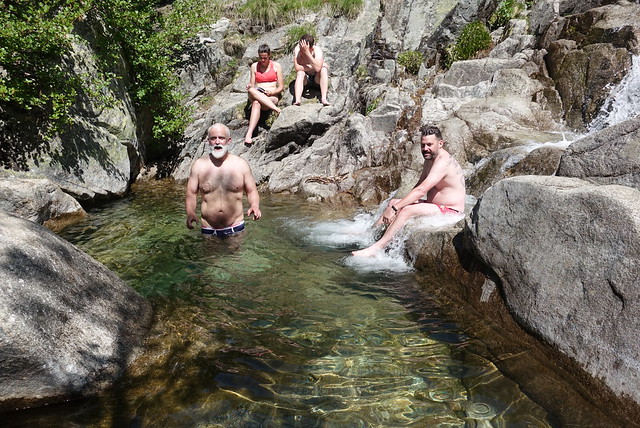 Cooling off in the river 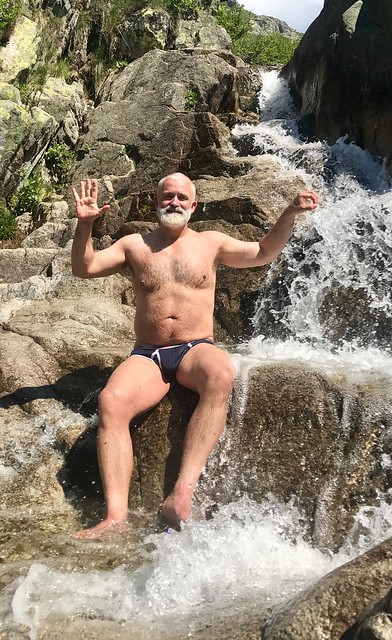 After a nap, we headed down to dinner, served outside on the refuge terrace. Passable pasta, some charcuterie, a tasty chestnut mousse. We washed it down with a Pietra beer to start, then switched to a flask (or two) of rose, whcih was perfect, the sun was so intense that Jon ran up to get sun cream for his (uh our) legs. 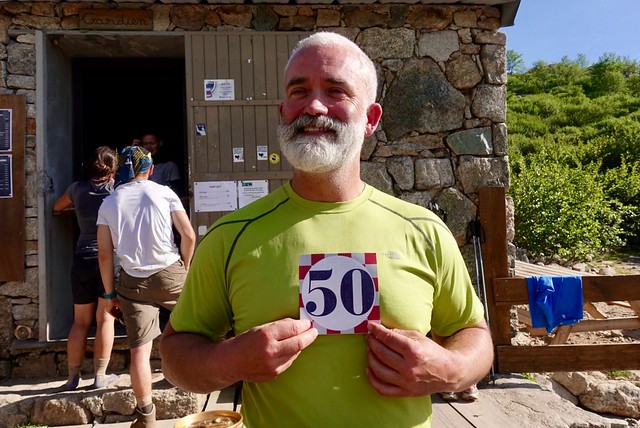 Oh, and we did sing happy birthday to David. Happy birthday! Now it's off to sleep--tomorrow is a 'tough day', but we're kinda both used to those and over those. 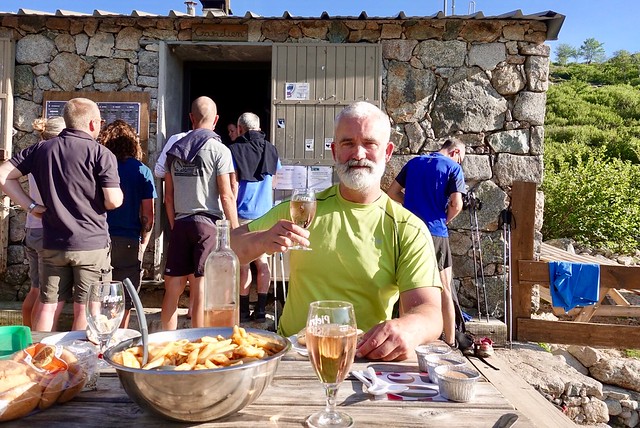