The guidebook lied. We had thought "hey, we could combine day 5 and 6 into a long 11 hour day, wouldn't that be swell". Uh, no, it took us eight hours to finish just the first bit, and we were done for the day.

The day did start out great--a bit rocky for the first half an hour down the canyon. We quickly passed the old route around Mount Cinto--it was closed two years ago when seven hikers died in a landslide--and then past a bergerie selling fresh cheese. 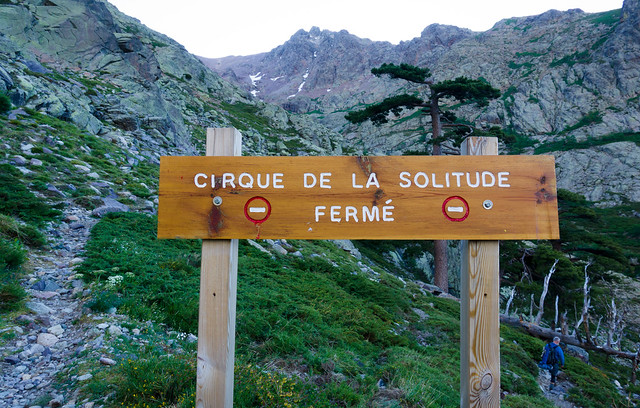 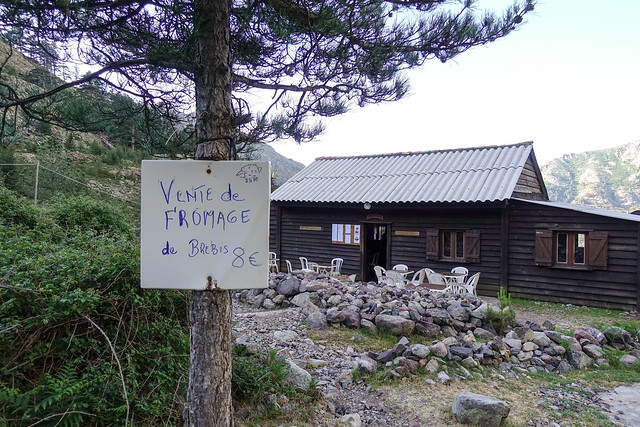 Down the valley we could see the reservoir and a little settlement on the south side, so it's just a straight on downhill walk, right? We have 3G service, ferchissakes, and the guidebook said "easy easy easy", literally three times in the summary for the day, how can it be wrong? 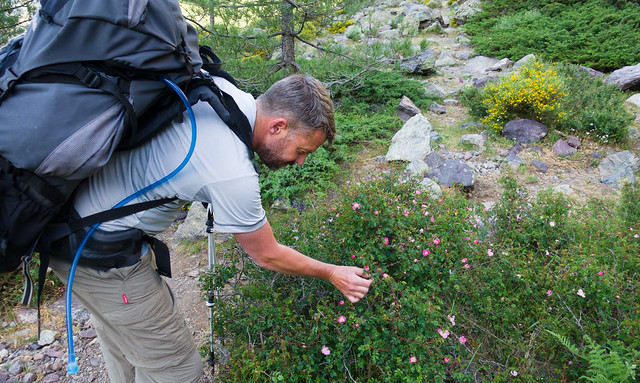 Jon stops to smell the roses 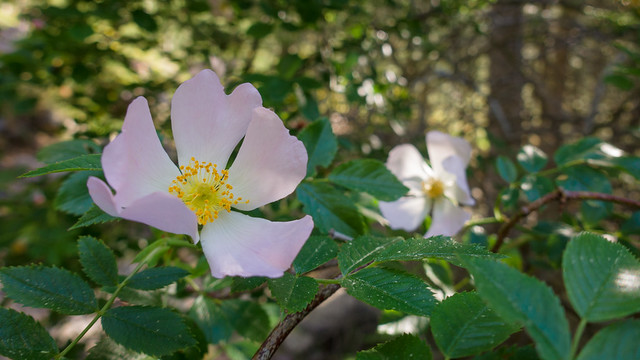 A smattering of roses here and there; smelled sweet 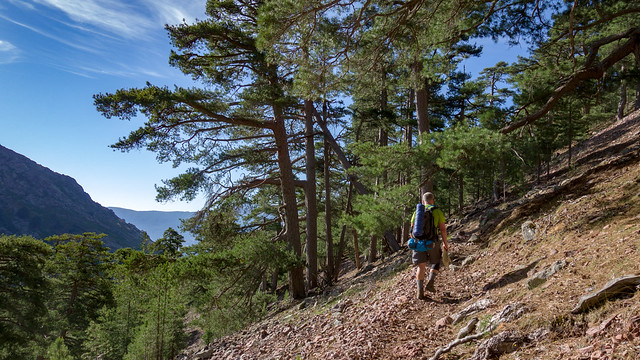 This trail is mighty easy

Well, when the path started heading up a side canyon, I kinda wondered why--why is it getting so rocky? Why doesn't the trail go alongside the stream? Why is there another bocca straight ahead of us--are we going up it, in this heat? The eastern facing slope was hot and mostly shadeless, it was a slog up the 500m in elevation gain to the top. 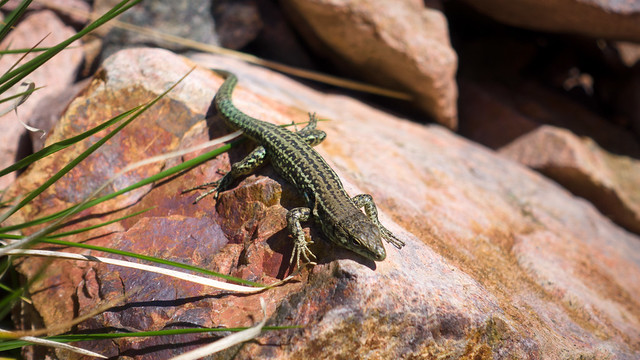 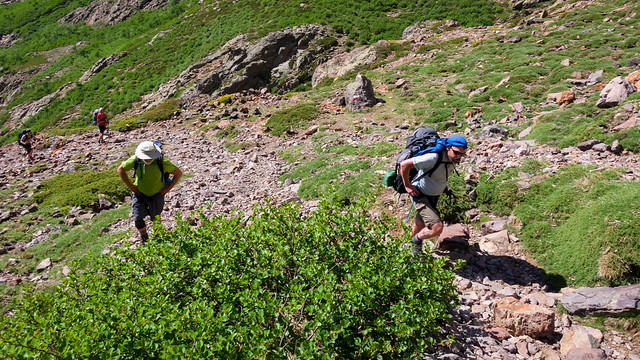 Trail not so easy 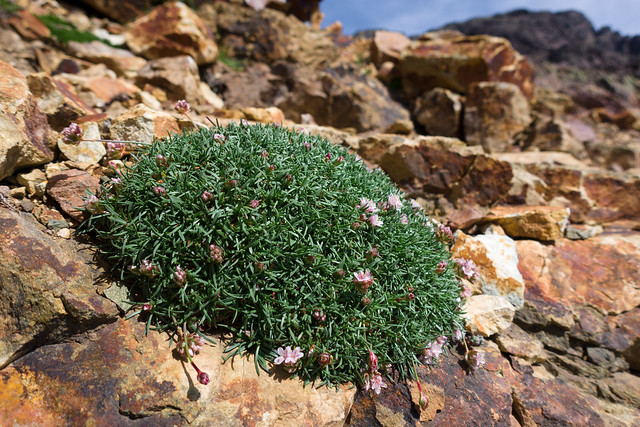 Up on top, though, it was nice and breezy, and Jon suddenly realized he had mobile phone reception and figured out that Theresa May hadn't quite won the election, sigh. Ah, the real world, but it gave the Brits a fun hour of chatter about Jeremy and Labour's chances and etc etc etc, I enjoyed listening to the prattle. Another thirty minutes along the ridge led us to another refuge, this one with nice cold Cokes :-) for 3 euro each :-(. We didn't care, we were hot and boethered and they hit the spot. 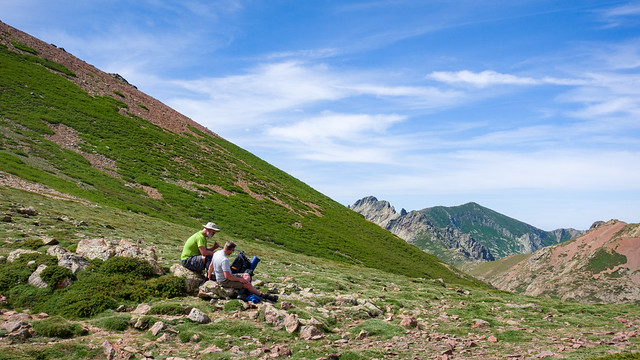 Resting in the wilderness, with 3G. Learning about Mayhem. 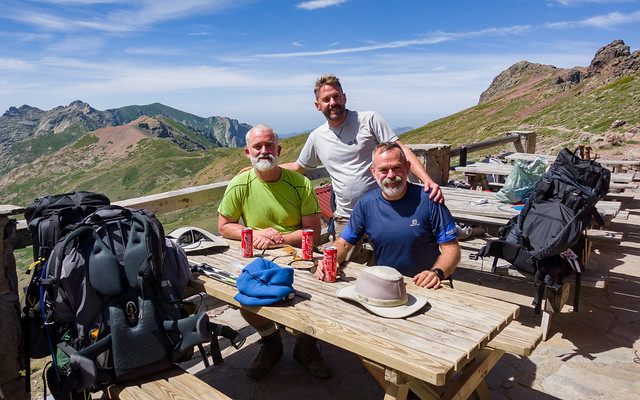 Enjoying a Coke and a smile

From here, we figured that it'd just be an easy hour or two walk to the hotel, right, with maybe a dip in one of the pools along the river, easy peasy. Uh, no. First of all, there was a slightly too-long scree slope to get down, ugh, it just kept going and going... but at the bottom, we found a perfect mountain pool to cool off in. 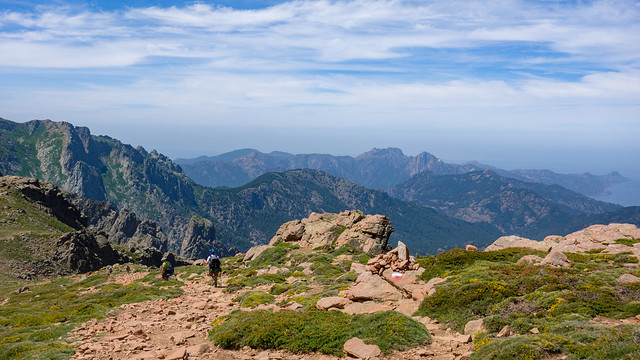 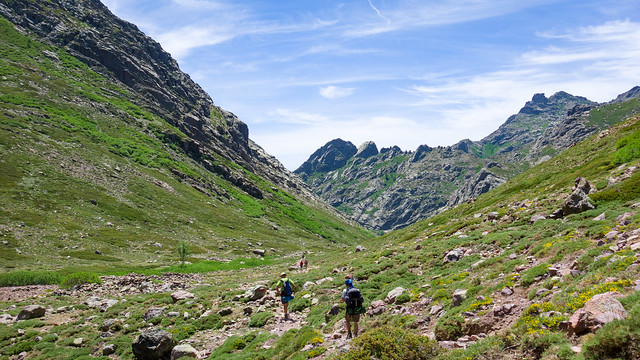 Down to the Golo River valley 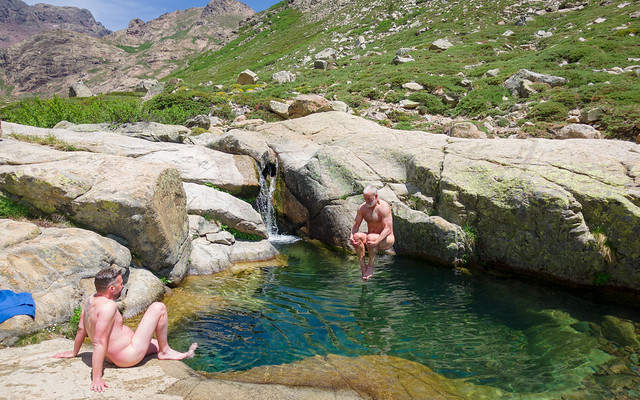 I wasn't too keen on the pool--too cold, though I did quickly dip myself to the neck--but Dave and Jon really enjoyed it. It was fairly deep, so cannonball jumps were made, splashing about was had, even some prancing and parading. We took a few discreet pictures, nothing too naughty, it was a wonderful refreshing break.

Now we really expected the hotel to be right around the corner--just down the hill, right? No. There was a bergerie with blue chairs and ice cream that we passed, certainly the hotel would be 200 meters farther along the "easy path through the woodland? Uh no. 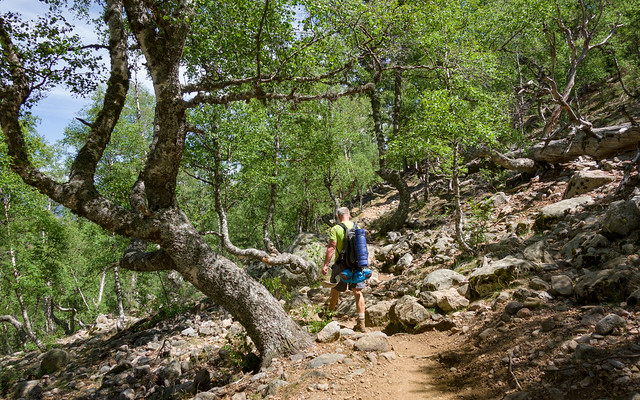 The endless walk to the hotel

We were tired, and hungry, and regretted not having a bite to eat at that high refuge. It got shady, but that also meant the breeze didn't penetrate the forest, so it was also sweaty, and we couldn't see much. Is the hotel just beyond this ridge? NO. There's another ridge. Is it at the top of this next one? NO, though now we could hear traffic. An hour of this hungry marching, and we were all just tired.

Finally, and a bit unexpectedly, the path abruptly came up to a road edge, and we could see the hotel a few hundred meters on, yay. The hotel was all full, but they had a gite available-basically a bare concrete room with a bath and four bunk beds--and we snagged it and got on with our afternoon routine--washing up, this time with a wonderfully hot shower, some clothes cleaning, a nap, then G&T o'clock. Dinner was at the hotel--a spicy stewy soup which I liked, a thin ribeye steak which I never enjoy, though Jon and Dave that it was great and nommed it all down. 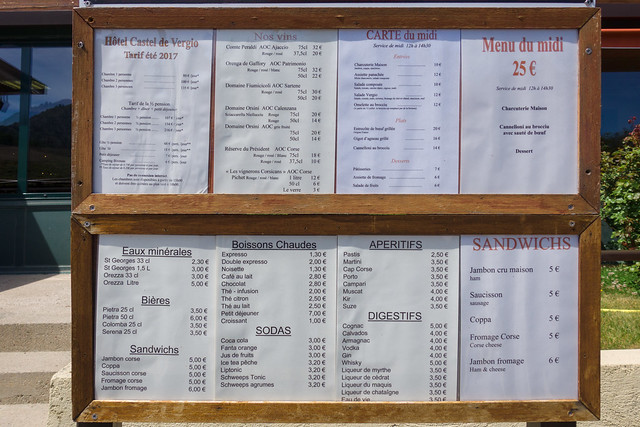 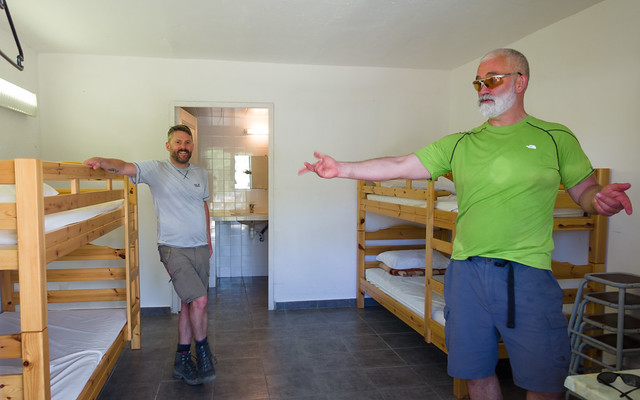 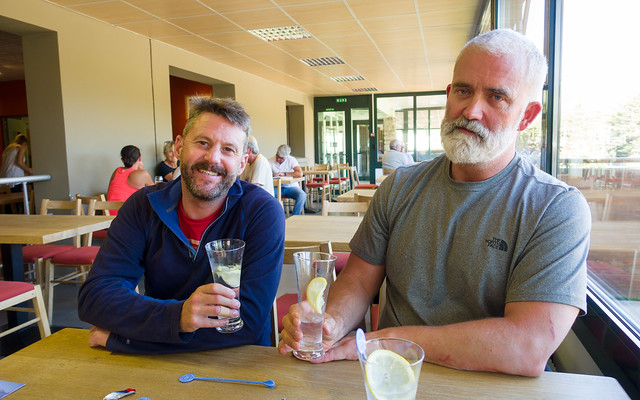 Some blogging, some planning, some photo-swapping, and it was time for bed.