Ah, the luxury of the hotel room had to come to an end, and with a little breakfast we were out on on our way. 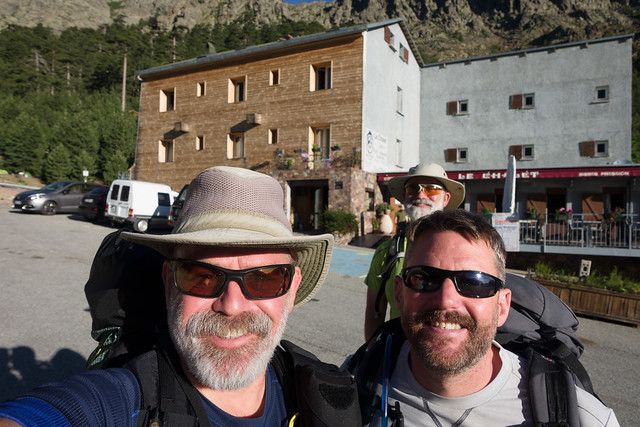 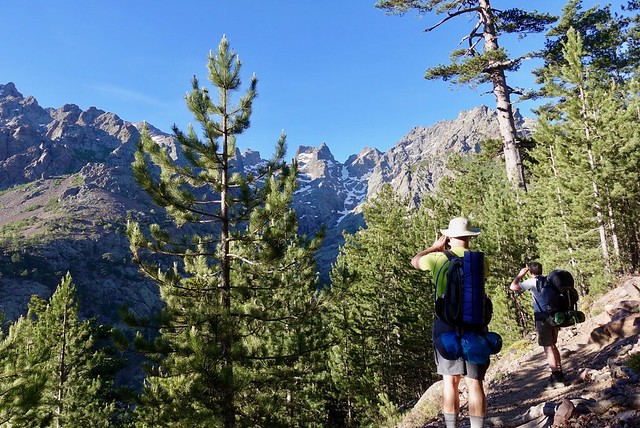 Looking up at the pretty mountains

The first stretch of trail felt very familiar--under the pines, a well-formed path scooting around the various boulders, it could have been Idyllwild or somewhere Sierra like, except for the towering jagged spires above and the many, many waterfalls spilling down from the snow patches still clinging on to those north-facing shadowy bits. We were headed up, and due south, through this wonderful valley, the walking was easy and the scenery fantastic, crossing a wooden bridge over a cascade, still in the cool shadows. 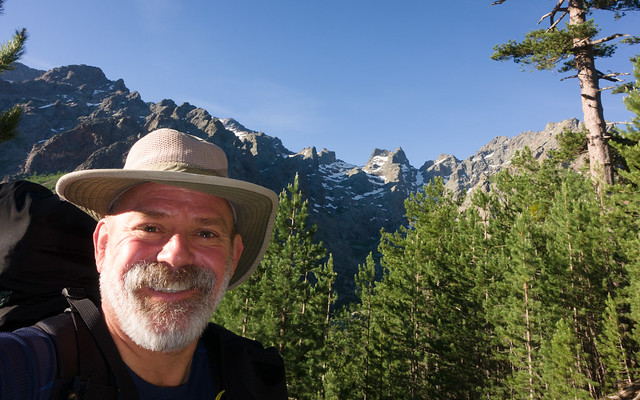 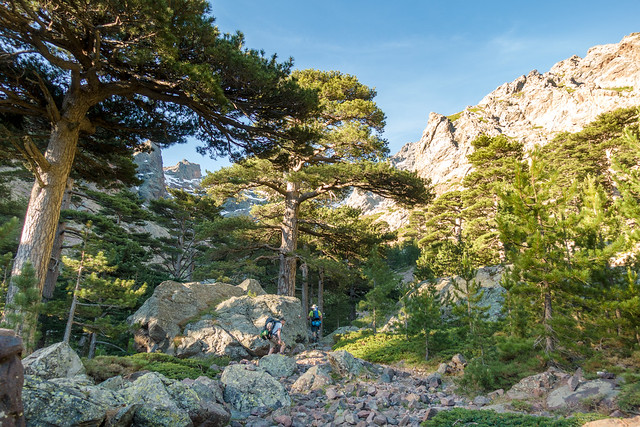 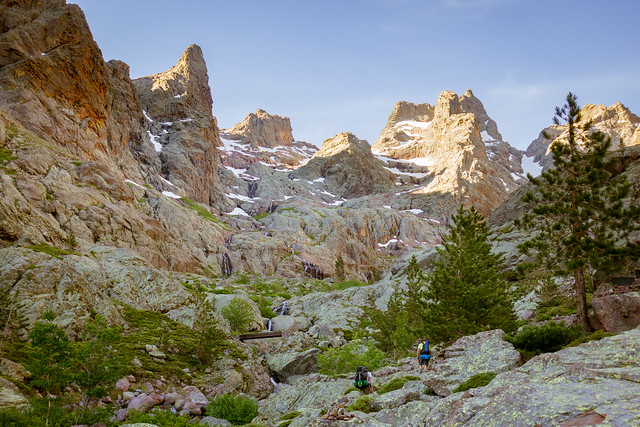 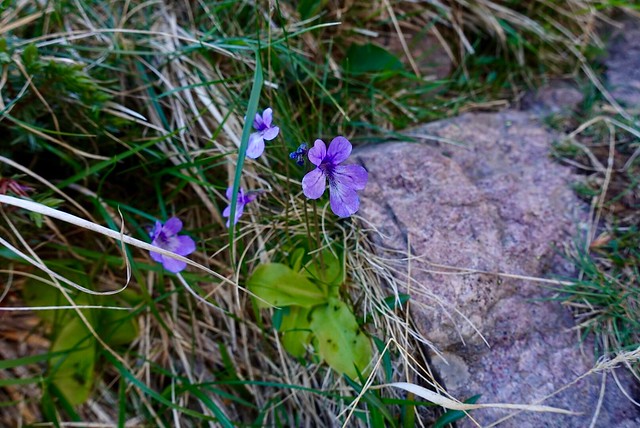 That, of course, changed pretty quickly... after the bridge there were chains to haul yourself up some tricky rocky bits, then more slog slog up and up, the rock turning to scree which is never fun. The sound of the loose granitey rocks screeching against each other with every step reminded me of fingernails on chalkboard; at least we were still in the shade, but not for long. 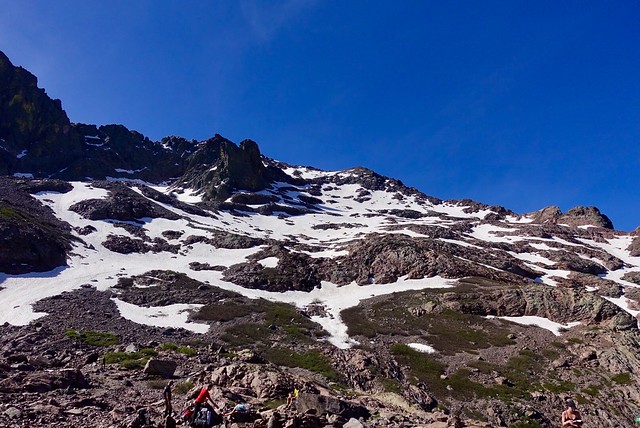 The snow climb in front of us

The scree ended at a little flattish shelf, and up above we could see the next challenge: 500 meters or so of vertical slope, mostly covered in snow. Ugh. It looked steep but not. impossible--we could see people far up on the slopes--but it certainly wasn't appealing.

But then, aha, a certain dilf walked by; we all ogled and later all agreed he was an 8, a little tubby, with his gf/so sprinting ahead of him. Poor guy in his button-down plaid beachy shirt; we could take care of him. Jon decided that if we couldn't have him, we could at least have Gandilf, which is how DWT got his name d'jour, and possibly more permanently ;-) 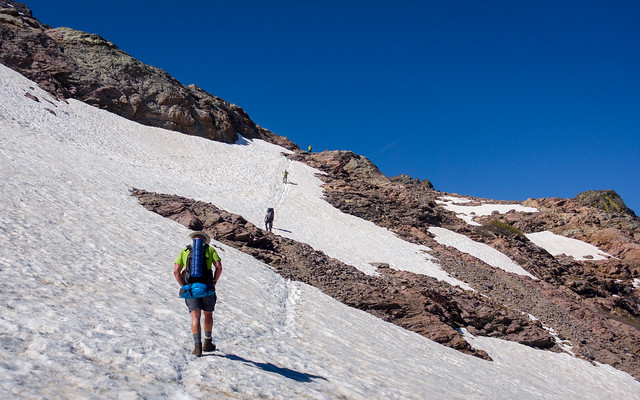 Up the snow... it was hot climbing up

But sigh, the snow. Dread. But sigh, once we were on it, we found it much more preferable to that loose rocky trail we'd trudged up. The snow was firm and fairly compact, without many slippery bits. at all, and my hiking poles certainly helped--though one was bent when I misjudged a toehold. I was not about to slide down that 30 degree slope. At least there wasn't any postholing--it was just too warm overnight to make that icy crust, I figure. 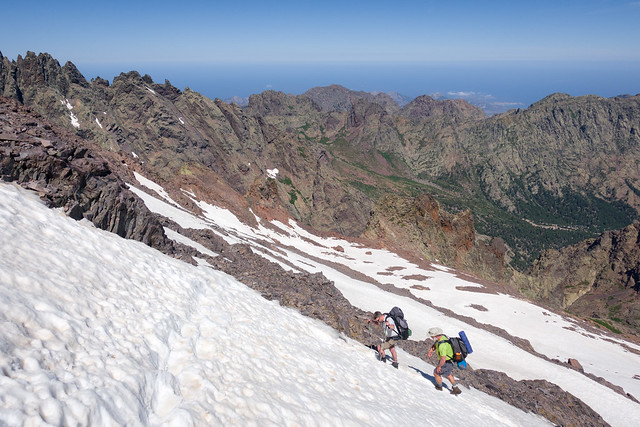 We went up and up, and it seemed the higher we got the steeper the slope. For awhile I lead, and I thought that doing little switchbacks would help (they did not, you ended up slipping sideways), so we just ended up going straight up, a giant StairMaster, working out those quads. Man was it tiring, and hot--I looked down on my forearms, and they looked purple. 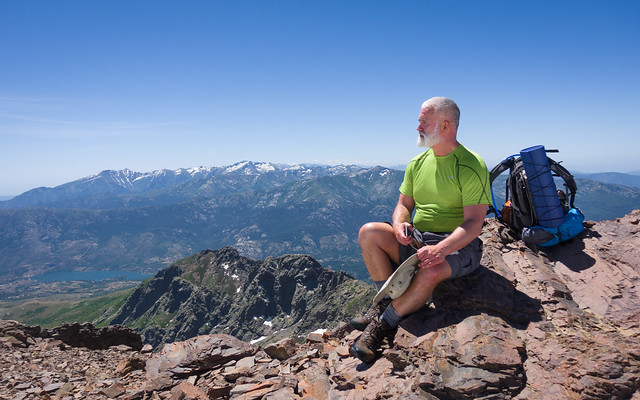 As we approached the crest, the snow lessened, and the slope became less steep--and then finally we were on top. Ah, sweet relief. I really do not enjoy snow hiking, that fear of sliding down the slope after losing your step, tumbling end over end, ending up in a crumpled heap, draped over some unforgiving boulder... but I figure traverses like these are just something that have to be done from time to time. 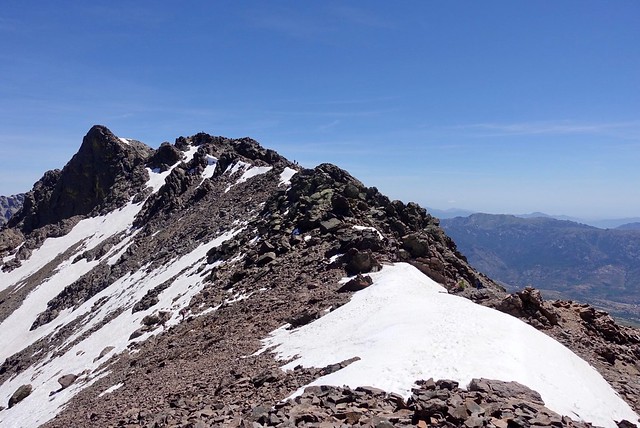 Monte Cinto, further along the ridge.

Now that we were on top, we were all giddy, yay. Did we want to do the 90 minute out-and-back to Monte Cinto, the highest point in Corsica? Uh, no, we've had quite enough. We sat and giggled, Jon did some mysterious dance with his poles, took pictures, and were generally relieved. Dave and Jon showed some resourcefulness by pulling out some ham and cheese sandwiches left over from the breakfast buffet. :-) I felt stupid for not thinking of such cleverness; a few crows showed up and really wanted a piece of that too. 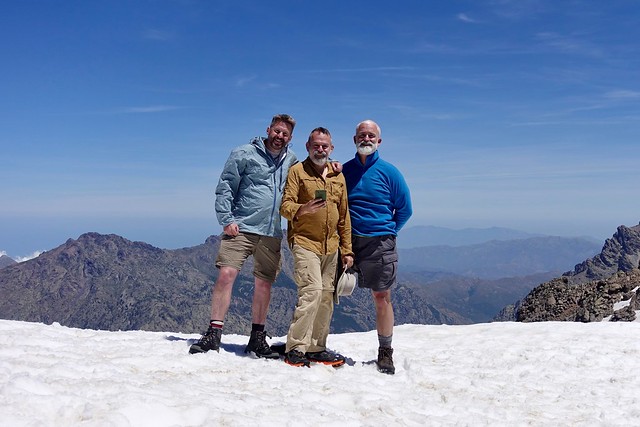 From the crest, the trail extended southwest along the ridgeline, and it was wonderful going: sunny without any wind, but not hot, views south and west, ahhh, it was wonderful. In 45 minutes we were at the next bocca, and from the top we could see the refuge far below. Maybe an hour? 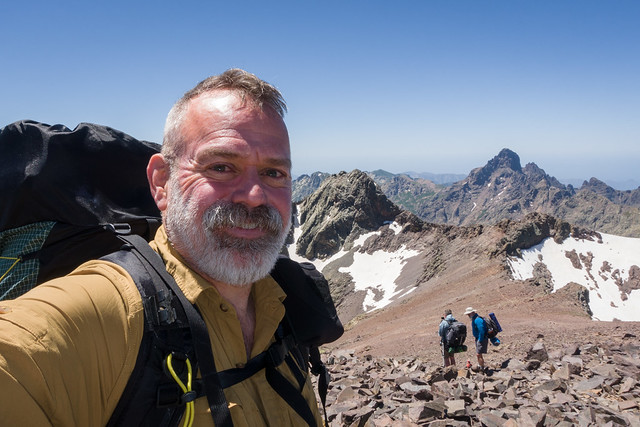 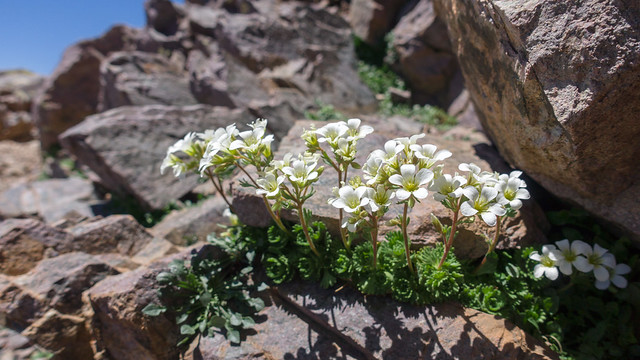 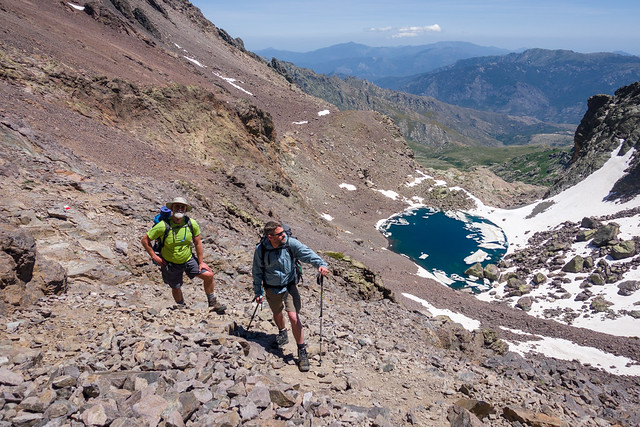 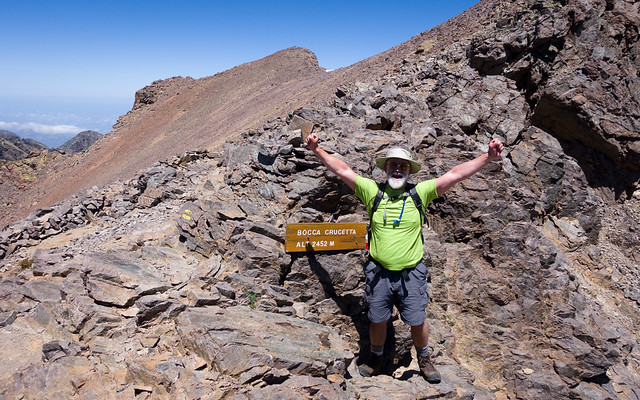 David does his impression of the letter Y

Uh, no. Not an hour. Not two hours. 2 1/2 hours, losing 1200 meters (3800 feet) in elevation, just down down down, at first on dusty scree, then on rocky ledges with the occasional scramble. 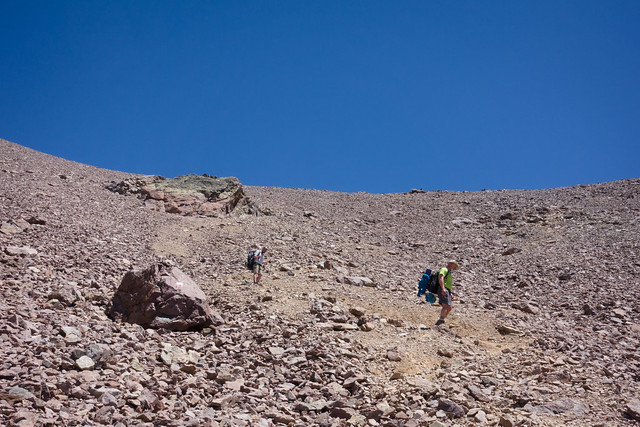 Our legs really couldn't take it, and all of us shifted into autopilot for the last hour, just one foot in front of the other, and trying to keep our balance after seven hours of tough walking. I was starting to feel dizzy as well, which I thought might be a little sign of dehydration, so I filled up at a side stream, and (gasp) drank unfiltered water. It was clean and very very tasty, and I felt much better after a few minutes.

Annoyingly, as we got closer to the refuge it went behind the spur of the mountains, but we couldn't figure out which spur it was--was it around this corner. No. Was it around this corner? No. We were tired, hot, bothered, and just wanted it to appear. Finally finally, it appeared, with a little final insult of a 30 meter climb up to the refuge. There was only one bed inside available, so Jon took it; Dave and I pitched our tents down below; and we all celebrated with a Coke, the slog was done. 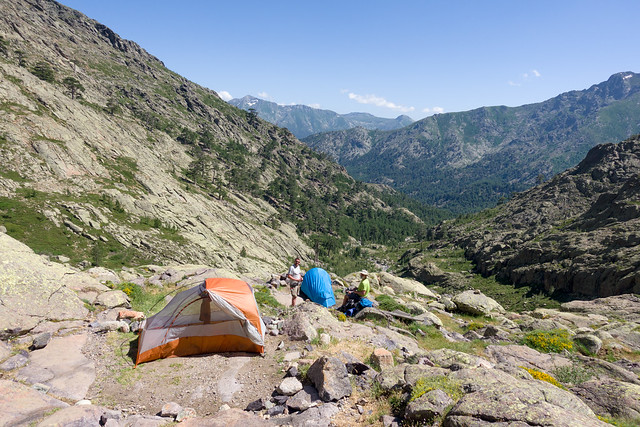 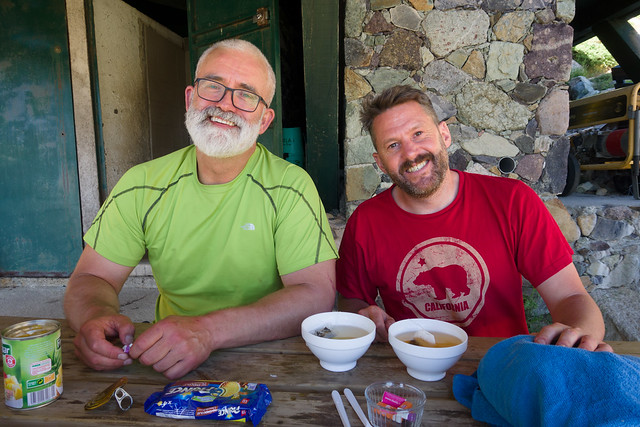 Tea at the refuge

The rest of the afternoon was spent napping and washing up. Dinner was really good--starters were a plate of Corsican charcuterie (the ham was fantastic), followed by a generous helping of spaghetti bolognese and a dessert of applesauce. 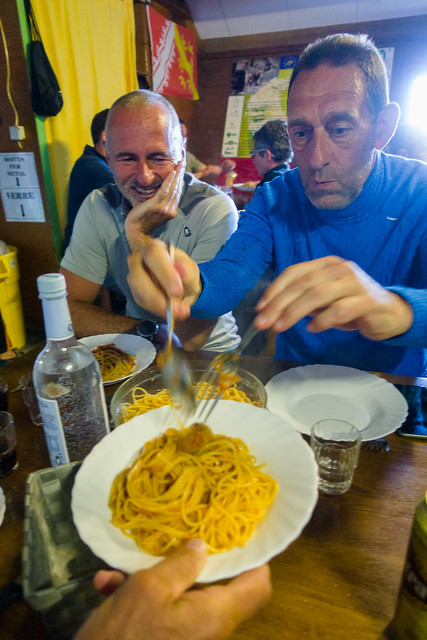 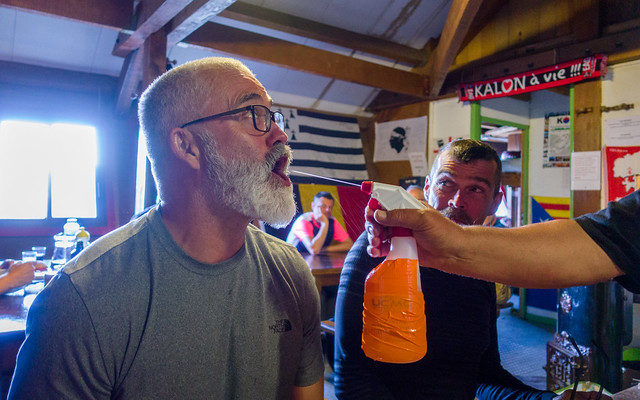 As an added bonus, the guardien of the refuge came around with a curious squirt bottle, said "open up", and sprayed a tasty after dinner beverage into our mouths. Ahhh, it was silly enjoyment, and we were kicked out for the second dinner seating of the night, and sat outside on the warm boulders watching the light fade and summing up the last four days. 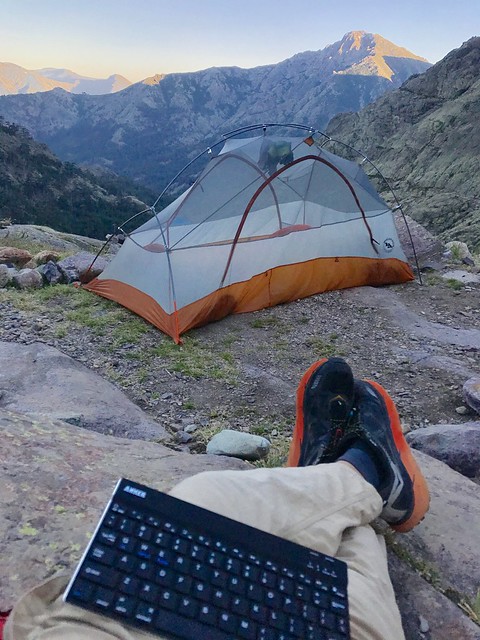 Dave and I rated the days as such

Tomorrow we're considering doing two stages at once. Both look fairly easy, perhaps 22km of walking? We will see how we're doing, for now, it's off to bed.