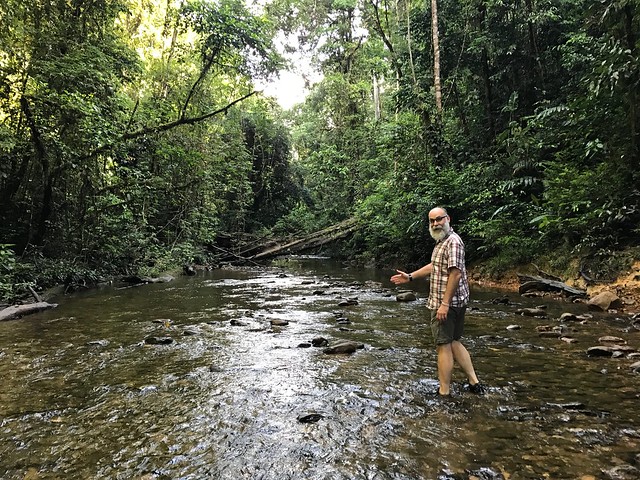 A lazy day, yet full of things to do: a walk up a river to a waterfall, a walk along the treetops high above the ground. And butterflies.

Once again, breakfast. Then it was off, downriver, on something advertised as "walking along the river to a waterfall". OK. It was just the two of us, and we boarded a longboat and scooted down the stream to a large yet shallow and muddy river, then turned upstream to visit another local village.

Like the stop yesterday, this was a Penan village, a single building maybe 150 meters long with single rooms lined up one after another on the first floor, with a broad overhang. Families were hanging out on benches in front, idly; some said hello and good morning but mostly they chatted with themselves and paid us no attention. There were beads here and there, and baskets, same stuff that I have no use for. We walked down to the end then back over to the river, past the church and its Christmas decorations, the church kitchen, a rambutan tree with fruit, several dogs and outboard motors and boats on racks. 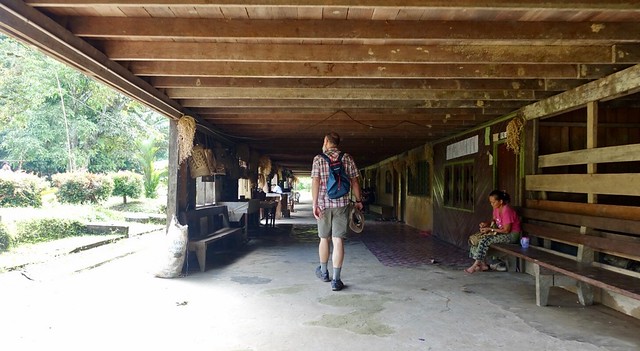 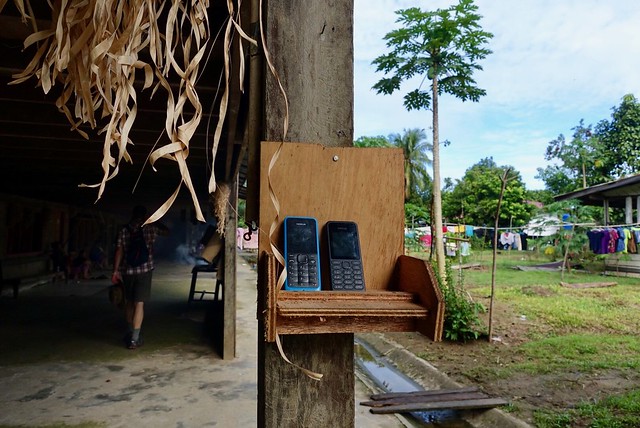 Back in the boat, and up river more, through steep hills, turning down a clear side stream and going up it a little bit before the rocks start scraping. "Here it is" the boatman said, "Just walk the river and you'll come to a waterfall, it's not too far." Walk the river? Oh, walk in the river. Are there leeches? Pirhanas? Snakes? Oh, it's kinda warm, let's walk. We took off our socks and walked in the 'river'.

The stones were kinda slippery, but a few walking sticks helped balance us out, and we walked upstream maybe 20 minutes to a little pretty cascade. The river was pleasantly cool, and unlike much of the other forest which seems very closed in and still, there was a breeze upstream, which was great. Very pleasant, and though we looked for wildlife we ddin't see anything.

Back on the boat, back to the hotel, some lazing around and looking at pictures. The afternoon's activity was a treetop walk through the forest canopy; we decided to scoot over there early and do a walk down a botany trail. It was really well signed, and considerably more technical than most national park signage, chatting about differences between conifers and cycads, some more about gingers and bananas--there are different banana species! 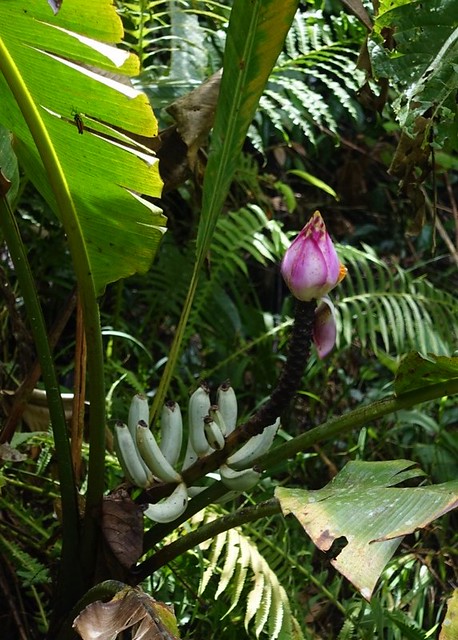 There was a nifty little grove of a few different palm species that was interesting, but the things that caught our eyes were the butterflies and moths. It was sunny and warm, and where there was an open patch of sunlight the butterflies congregated. That doesn't mean they were easy to take pictures of, unfortunately, but I got a few good ones. 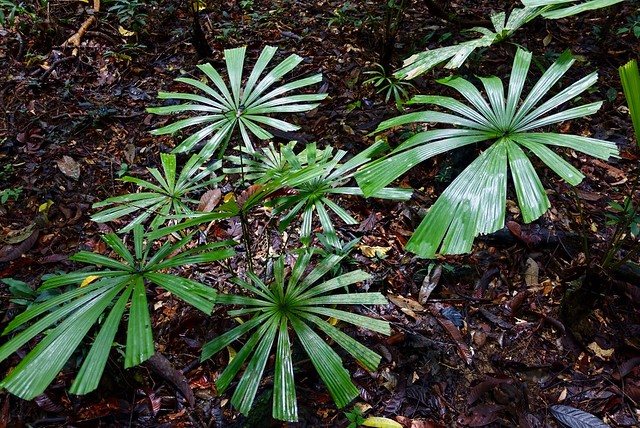 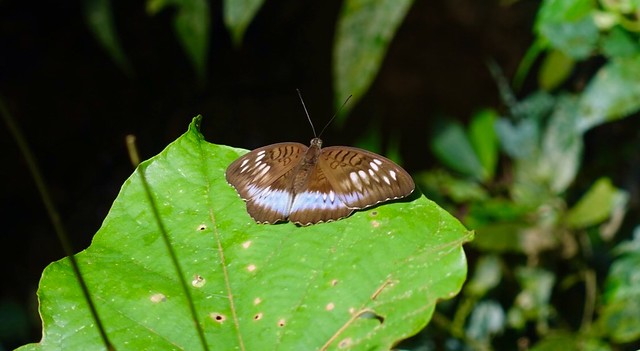 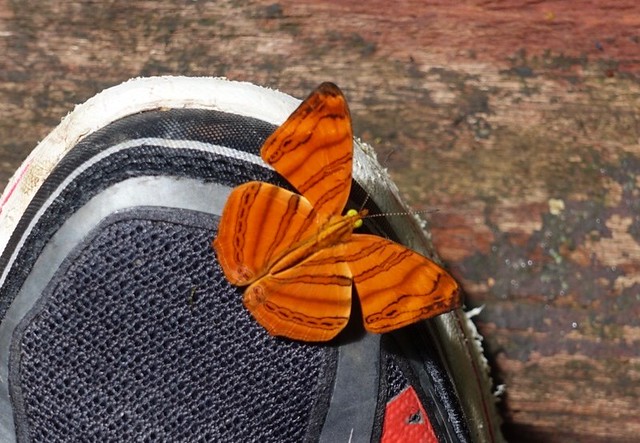 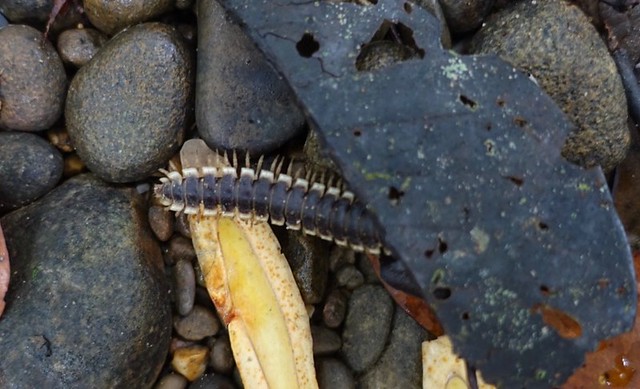 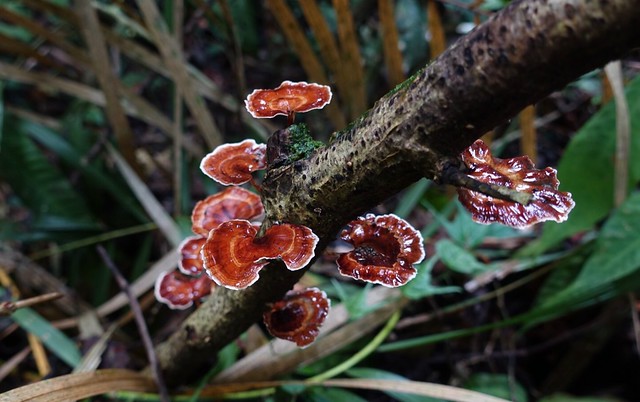 The tree-top walk closed out the afternoon, we met up with the guide and headed along the 16 different 'bridges' some 20m up in the air. It was wobbly and a bit scary, but not bad. I enjoyed seeing the very open canopy as well, so different than down on the forest floor. 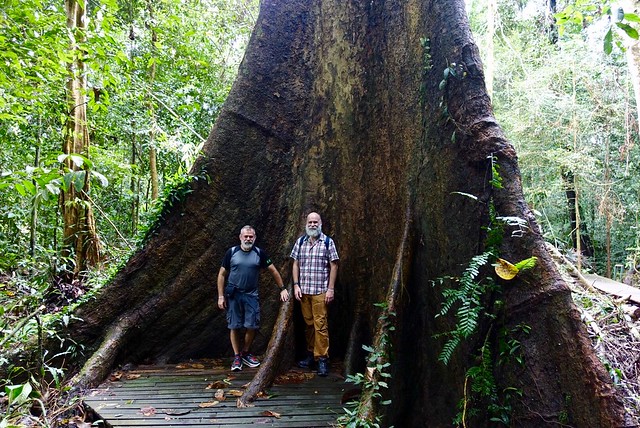 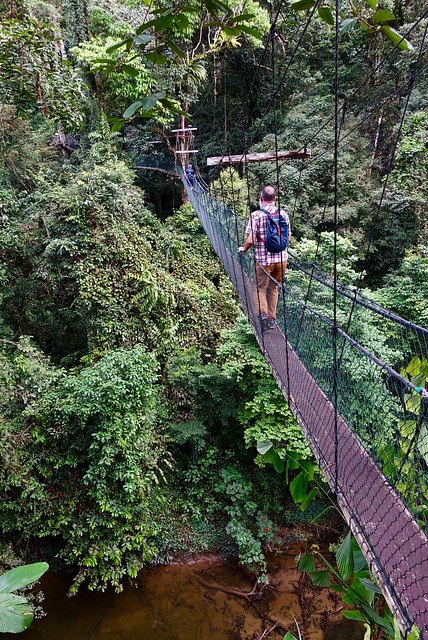 Back to the hotel, we chatted up a Kiwi couple along with us on the hike; teachers at a school in Brunei with their two boys out for a little break. We quizzed them: how's customs? Not difficult at all. Alcohol? Sure, just fill out the yellow form when you enter the country; you can take 12 cans. Things to see? Uh, it's a large town. See if you can get a harbor cruise, but don't let them charge you more than $15 or $20 each; haggle them down from $100. That's a relief.

For the rest of the day, though, it was nap then dinner then pack. Last night here, before moving on in the afternoon to Sandakan.

< Clearwater Cave Last hike and out >