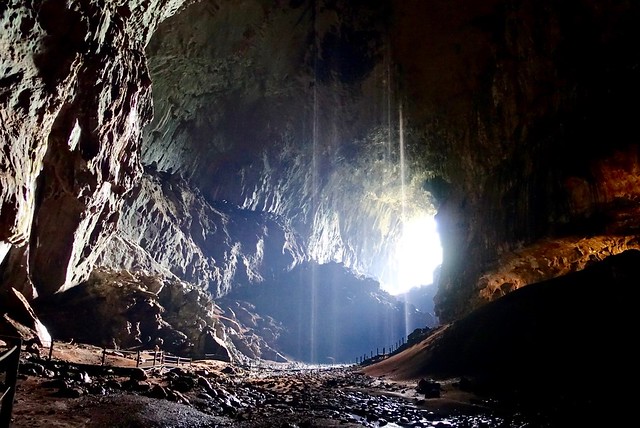 We're ready for adventure. Today is a visit to Deer Cave, which has the largest cave room in the world.

And we visit next-door Liang Cave, discovered a couple of decades ago, and watch thousands of bats stream out at dusk.

Yep, we're ready. Hop on the trolley bus, drive the 3km or so to the park, check in. The park looks efficient and well and well documented; we get a pink festival wristband with "31/12" and "Mulu World Heritage Area" and bats on it.

And, surprisingly, it's 3pm and we're told we'd be walking 9km today, so we get to it, along the mostly board walked paths through the rainforest, passing dozens of skinks and a metallic blue butterfly. It's warm but not hot, maybe 85F/30C, with scattered clouds. Definitely jungle (starting to sound like a very archaic term), but not sweating buckets. We arrive at the bat observatory, a clearing with viewing platforms, have a Coke, and read the very detailed and informative signs (yes, in English) about the bats. (Large bats are related somewhat closely to primates! Small bats aren't!). There are 16 species of bats in this park, and many of them will be streaming out of Deer Cave later. We can see the cave opening in the cliff in front of us, a huge open round maw maybe 50 to 75 meters tall.

Our guide arrives with a family--guides are required in the caves--and we head up to the first cave, Liang, which was discovered around 1990. It's a very very pretty show cave, warm and very humid and wet, with no visible damage at all. The lighting and walkway are top-notch. Happy to see they're doing things right here. Then onto the next cave, the highlight of the day.

One curious thing about this park is that it's very newly explored; mainly in the 1970s to 1990s, so it's slowly building a reputation. Many caves are still not fully unexplored. Deer Cave is not one of those; it has the largest cave room in the world, and we head into it.

Wow, this is big... and mostly empty, unlike the highly decorated Liang Cave next door. With the sun sinking in the west the cave is brightly lit. The interior room is massive, I'd guess 100 meters tall and 200 wide and 400 long, an Olympic stadium could fit inside. As we make our way back into the cave, it feels like a spaceship or something, darker and darker, ours eyes adjust and we look back to the opening and see spectacular waterfalls (really showers) raining down from the roof, catching the light. Up on the ceiling we see dark patches of bats, too far away to make out details, but we can certainly smell the guano they've left--don't look up with your mouth open. It's not an overpowering stench, though.

The trail winds its way back, up and down, ending at an overlook where the cave has collapsed, now a huge green atrium filled with fishtail palms and lianas... and as we head on out, we see the bats stream out of the cave in spiraling ribbons like some thin smoke monster. Back at the bat-watching clearing, we watch these streams, writhing, one or two times we watch a bat eagle dive through the stream to pluck off a bat for its dinner. Wow this is really exotic, what a great place.

It's getting dark now, but there's lights all the way along the trail back to the park HQ, and the frogs start booming "WHAT. WHAT WHAT. WHAT WHAT WHAT." The cicada-sounding things are still buzzing, the birds are chirping, surprisingly there's no mosquitos or bities. Oh, yeah, with a million or three bats cruising around every evening the mozzies don't have much of a chance.

Back on the trolley bus, we arrive back at 7 and both decide to take a nap before dinner, a nap that lasts 10 hours. Might as well do breakfast then.

What a great day.