Finally, we arrive at Mulu National Park, and get on with the adventuring!

I'm not sure how many hours it took us to get here--48? 96?--, but we arrived today in Mulu National Park. It was a wonderful day.

Our hotel, the Mandarin, was right next to the Chinatown gates, which we could see out the window, framing a Christmas tree in the plaza in front. We tromped on down to the street, wandering here and there, stopping for a little iced smoothie thing (iced lime juice) at a noodle house, then up the street. Our simple goal this morning was to find an ATM, which is somewhat difficult to impossible in Malaysia. We tried a few banks first--all looked right, some were Islamic banks, some did not--but after entering the PIN the machines all decided not to give us ringgit. Feh. It was the seventh bank we tried, MayBank, that worked, ca-ching. At least we were in the corner of town with banks on every corner!

Now what? Let's circumnavigate the mall, with the Santa and Nutcrackers out front because it's Christmas so spend, the true meaning of the holiday, which might translate here as 'show love for your family by gifting lots of stuffs', fitting for the holiday's true origin honoring Saturn, the god of abundance and harvest and agriculture and liberation; such a complex mythology.

Behind the mall is the sea wall, a derelict empty lot, views of the stilt-fishing-villages across the channel, lumpy green islands, blue skies and seas, tiny ferries ferrying fishermen and commuters to and fro. Walking south, a stinky old-style bustling market, huge squid heads the size of basketballs split open, tomatoes, chiles, cauliflower (in this climate?), apples (same!), gingers of many types, green limes and green lemons and green oranges. A busy content vibe.

With ringgit, we go back to that same old noodle house and get noodles. Slurp. Yum. A few doors down is a bookshop with really interesting books on display, like "The Pitcher Plants of Borneo", from the Sabah Nature Society or some such. Total marmot bait. Purchased four of them.

And then off to the airport at 9:30am. We will not miss this flight. Our transportation shows up--one of the hotel cleaners--a green bill is handed over, we're off. Our driver is chatty, she wonders where we're going, Mulu? She's not quite heard of it, even though it's just 250km away. Ah, it's in Sarawak, not Sabah, different province! We'll need to go through passport control, what? And she launches into the Malaysian system of internal passport control checks, all left over from British times, so she says (and we're to find out she's right). I spot the Garmin GPS running watch on her wrist, a Forerunner 25, and ask her if she runs, and when, in the morning? It's so hot here in the afternoon. She says nope, it's much better to run after lunch, less humidity even though it's warmer than in the early morning. Interesting and useless to know. She's done a couple of marathons even--I remember when I was in KL a couple of years back, running was really big there too. Who would've thunk? 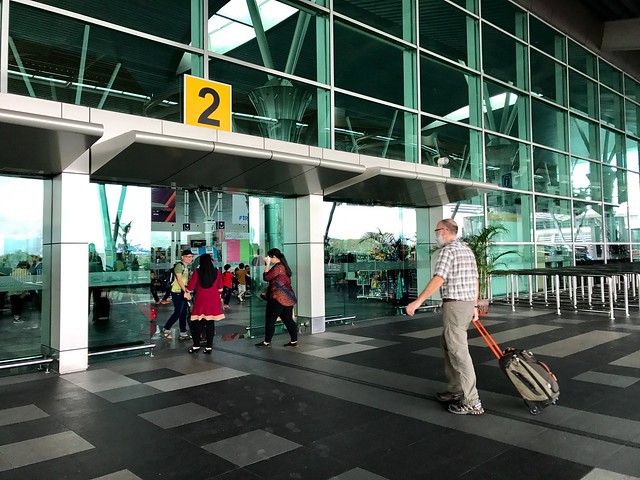 Airport checkin goes smoothly, an ATR-75 deal, and we go through the 'non-Sabah and international' checkpoint. Sure. Chris gets a foot massage, I wait at the Dunkin Donuts and want to buy coffee and a donut but only have 7 ringgit and the donut-and-coffee is 8.50, grrr. Chris figures that maybe we should see if his gemstone level on AA/OneWorld gets us into the Malaysian Air lounge, and it does, yay. Very pleasant. To be honest, I'm really starting to like Malaysia even more. （then again, I'm a moderately privileged white guy, but I'm not sure what that means here in this part of the world. Better just be humble and enjoy it.)

Plane takes off 30 minutes late, but we're amused that it's the briefest delay we've had yet. Up and over and I watch on Google Maps on my iPhone, the flight path threads the needle between the two discontiguous bits of Brunei before aligning with the valley Mulu sits in and lands in a wide lush valley with only a metal roof or two to indicate there's humans down there.

Resort bus meets us--it's a little San Francisco trolley car--and backs across a single-lane wooden bridge over a muddy river into the resort's lobby. Uh, this is fun. And fancy. This place, the Marriott Mulu Resort, is nice, nicer than I expected, fancy even. It feels rustic yet qsophisticated, stylish yet understated and even local. Stevi from the tour guides comes up, tells us our all-inclusive package includes a tour this afternoon in an hour. Sure, let's do it! (I offhandedly ask Chris later how much this costs; it's $100 US per person per day, including all tours and