We both slept a bit fitfully--we both had a bit of anxiety over the weather, and whether or not we could make it up and over the highest point of this hike, Paso John Gardner. When I stepped outside at dusk--around 9:30pm--to go pee, it was snowing, with maybe half an inch of snow actually sticking on the ground. We were camped at 600m/2000' elevation, and the pass ahead of us was twice as high. Yeah, we were a bit concerned. As we slept, we could hear water in some form dropping on the tent. Was it rain? Was it sleet? Was it just the wind rustling the snow off the tree branches above us? We really couldn't tell, but hearing that throughout the night was not relaxing.

In the morning, we awoke at 6am to a not-quite-Beyond-The-Wall scene, an encampment of brilliant orange and yellow tents in the snow dotting the snow under the nothofagus trees. There really wasn't much to do but pack, and we were ready to head out at 7--but was the pass open? Chris asked the park rangers, who said it was--but only for guided hikers. He asked a group if we could join, and they said sure, so off we went.

The trail immediately started climbing up through the forest, over rocks and roots and quite a bit of dry powdery snow that squeaked as you stepped on it. That was a surprise--why is this snow so fluffy and dry?--enough so that it was stacked in two inch deep drifts on top of the nothofagus trees, just waiting to pelt you and hit you in that little vulnerable spot between your jacket collar and your backpack, ensuring that you got a nice little chill down your spine.

The trail was also very very muddy; while the air temperature just above freezing overnight the ground was still warm, so it was slushy underfoot. We both were really glad for our gaiters and everything we were wearing; I know I was super pleased with most of my clothing choices, and feel I should run through them from head to toe because they worked great throughout the day:

The 8km/5miles up to the pass were a bit of a trudge--first up through the snowy forest, then across a few open spots, and finally we broke out above tree line into the windy open scree slopes... Covered with that same odd dry snow. 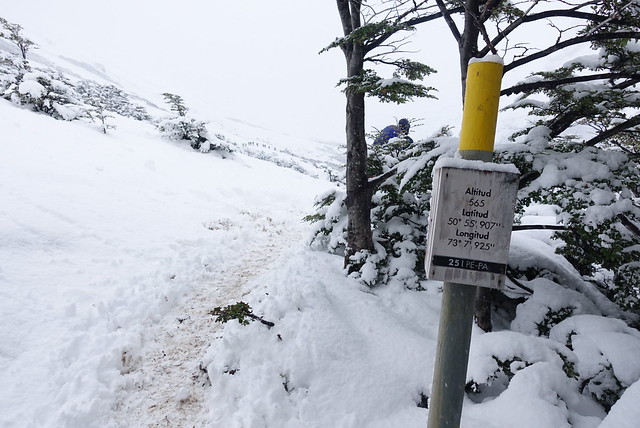 Up the valley, we could see what looked like the pass (but swasn't), down the valley we could see the glacial lake at the foot of the Perros Glacier. We kept trudging along, slowly, making a mile per hour, making sure we didn't slip o fall. It was slow going, the trail was very steep and snow covered, and finally around 11 we got to the top of the pass--yay!

What a scene awaited us--a huge white-blue glacier filling the valley in front of us; huge, wide, not some little glacier, but a river of ice three miles/5km wide, glowing blue, and definitely shrinking; we could see the inverse glacial tree line across the valley, where the glacier had retreated very recently, leaving trees above and barren twisted rock layers below. It was magnificent. As we looked down the valley, the glacier flowed around a landmark known as "La Isla", an island splitting the foot of the glacier in two. It was like a scene from a sci-go movie, surreal and unearthly; the sun peeked out very briefly and lit up the glacier from the top down in shades of blue and white; magical. 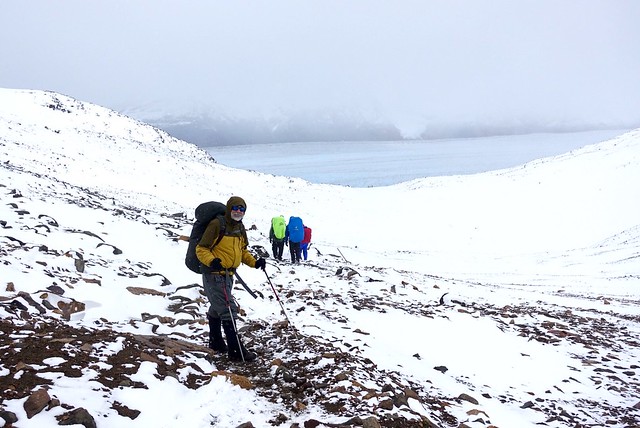 Down from the pass

Downhill from Paso John Garnder was difficult--the trail seemed much steeper, and there were many sections where it was just compressed and very slippery snow that turned to frosty mud that just turned to mud as we approached tree line. The trees were both a help and a hinderance--yep, you could grab them for support, but their roots across the trail were tedious to stumble around.

Some six hours after leaving Perros we finally arrived at Camping Paso. Ahhhh, a relief, and we were thankful that the weather was really, all in all, pretty good. It was warm, there was only a little bit of wind, and it wasn't rainy or snowy at all, just a few sprinkles a few times an hour. I made coffee and we ate Nutella and soda crackers because we could.

From Paso to Hosteleria Grey is about 11km, according to the maps, or 4 hours? Who knows. We just scooted down the trail. There was some ladder in a gully on one section, and the trail was a lot of up-and-down without much grace. I contented myself with taking lots of pictures of plants and flowers, there were a lot of things blooming and fruiting.

After a couple of hours, we reached the first bridge, a rather high suspension bridge strung 60 meters/180 feet above a deep chasm. I didn't like this bridge much at all, especially when some wind gusts pushed it around when I was on it. At least this bridge seemed very new... I concentrated on the bridge planks in front of me, and not on the deathly drop in the inch wide gaps between the planks. 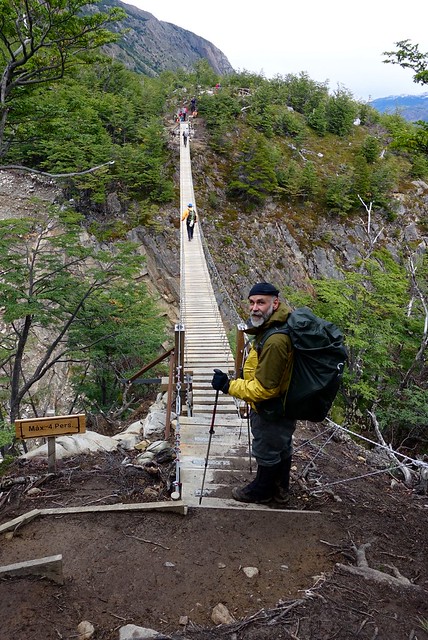 After the bridge, though, the trail got progressively better. We stopped for pictures at a few viewpoints, then hit the less-scary second suspension bridge, maybe only 40m above the rocky gully. Yay! By this time we were marching for margaritas, or whatever they were serving at the hosteria--and fortunately the trail flattened out wonderfully, and we made good time in.

The hosteria, surprisingly, was really nice--we found our bunks in a room with another mostly absent couple, took showers--ahhhh--had a really good dinner of soup/pork/rice/potatoes, drunk a bottle of MErlot (Quelcen or something)... And tottered off to bed. That coffee I made this afternoon is still fueling me a little bit.. But I know I'll sleep well tonight after the tough 13 mile hike today.