dan.marmot.net
< To Refugio Dickson Up and over Paso John Gardner > 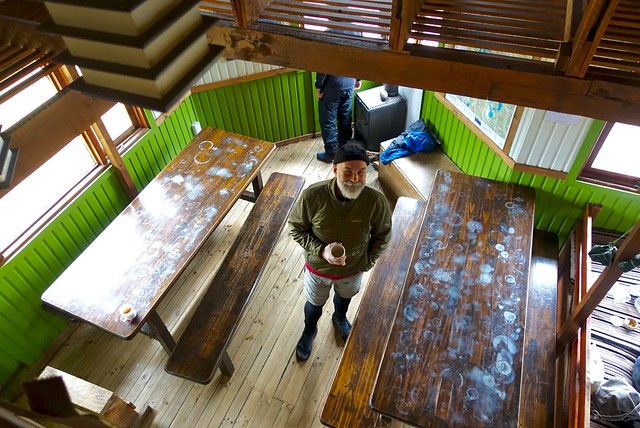 I didn't roll out of bed until 8am--it was warm and snuggly in my sleeping bag upstairs on the bed, and with earplugs in I didn't particularly care how noisy the obnoxious stupid four young Germans were, who had commandeered the table at 6am and started up again with their arguing. I had heard them last night as we went to sleep around 9:30--they were at the same spot at the table then as now--and thought their last night's squabbling was maybe just some cerveza fueled spat.

I thought about getting up at 7am and getting some coffee downstairs--if it's really nice out in the morning, we should leave early?--but when I peeked out the little dormer window, there were big meaty sleety dribbles coming down. I had also taken out the earplugs and got another dose of the Germans, ugh, but I did peer over the balcony again to look down to see how crowded it was. No one was downstairs except the Germans now, they'd driven everyone out; one of the two women was accusing her boy-Mann of not taking down the tent when it sunny out earlier and now it is raining, he was passively agreeing, the other woman chiming in and saying "yes, and now the tent is going to be very wet and heavy", and the boyMann doing 'ja ja wohl'. Great way to start the morning, ladies, throwing tantrums in the tiny Refugio at 7am. And it's not like we can't hear what you're saying because you're squabbling in your super-secret language either.

Anyways, breakfast was simple but tasty, just like dinner--corn flakes and granola, ham and cheese and bread, juice and coffee, yogurt, and we lazily packed our stuff, watching the weather change from sunny and clear to showery and misty to overcast and snow over the span of half an hour. When the wind blows the weather through these latitudes at 50mph, you get 50 miles of weather in an hour--or better yet, we're getting the weather that far south New Zealand might've had 3 days ago, except for that weird warm day yesterday. What's up with that? 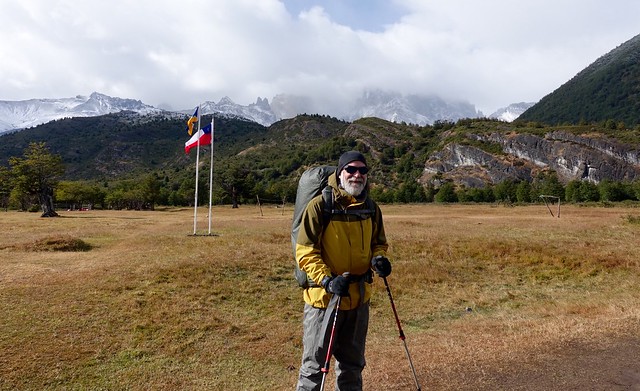 So, back on the trail at 10:30am. It's just 8 miles and maybe 1200 feet of climbing to Camping Los Perros, just beyond the Los Perros Glacier. This was a different hike than yesterday--it wasn't warm and windy, but cold and calm, with little dribbles of rain. The scenery wasn't very scenic either, it was mostly walking through dark scrubby nirre forests, then up valley some taller lenga trees made a nice open canopy. We'd get occasional glimpses of the peaks around us, but generally it was just cloudy so you couldn't see much. 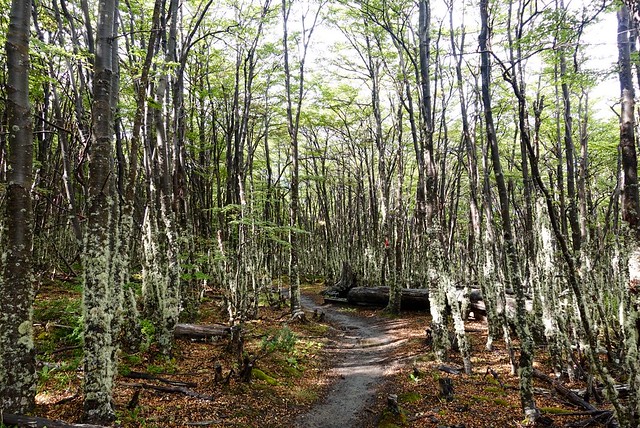 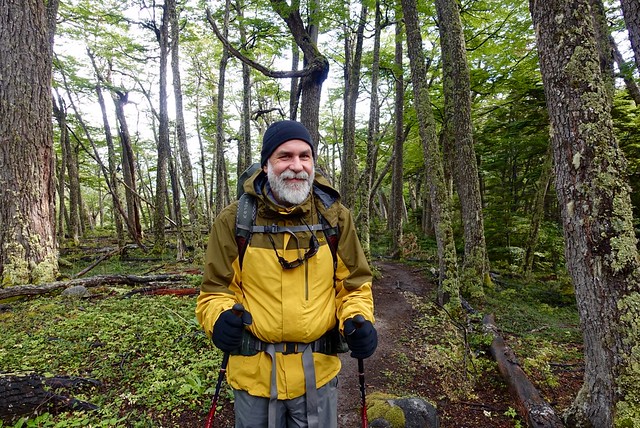 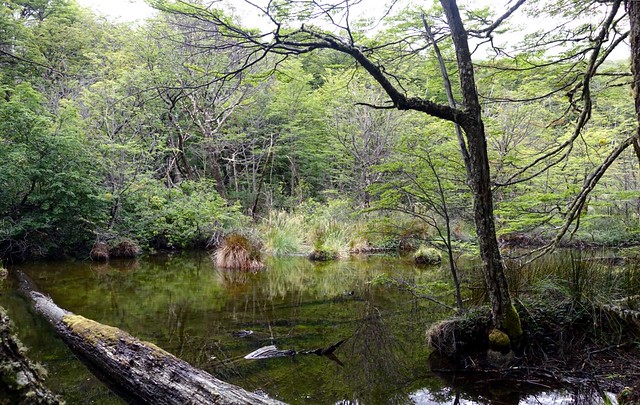 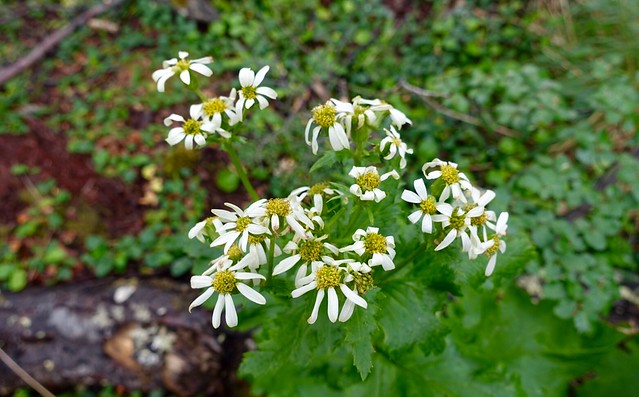 The trail was a bit steeper too than I expected, 1200 feet in 8 miles isn't much elevation gain, but this particular segment had a lot of steep little pitches, followed by steep short downhill slopes. Lots of roundy rocks on the trail too, slippery, so you had to watch where you stepped. It wasn't fast going, and it started snow pelleting even though the temperature was around 50F/10C. I'll take pellets over drizzle any day. 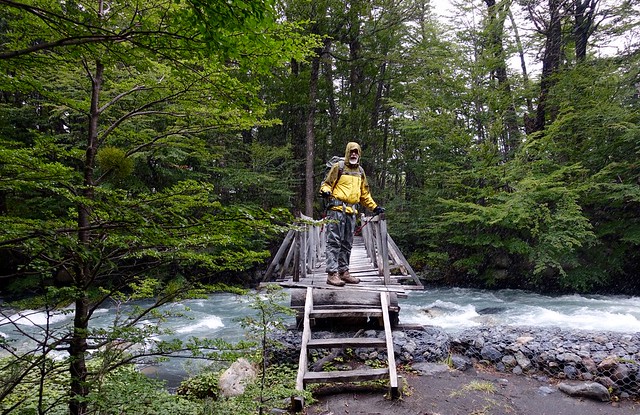 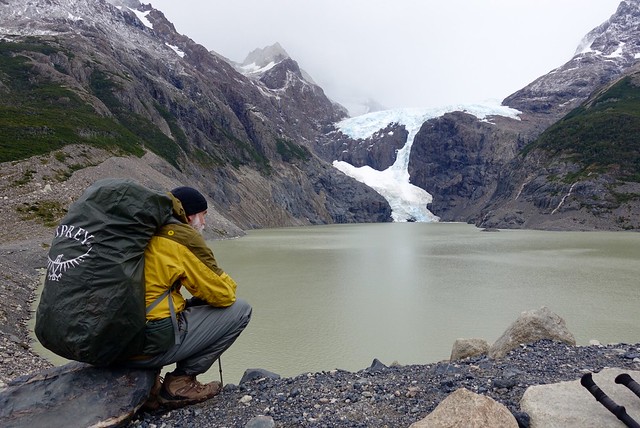 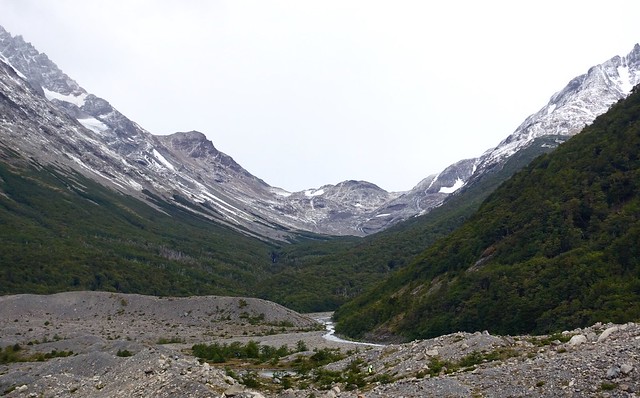 Some six miles in the trail went up and over a series of little terminal moraine mounds, like someone had bulldozed a ridge into the landscape--we must be getting close to the glacier, and I wondered how old those moraines were. A hundred years? Less? Soon enough, the trail bounded up a chunky bare hill, and we were on the rim of a lake fed by a glacier. Chris was amazed at how blue the ice was on the glacier's face, this fluorescent swimming pool blue, even on this cloudy day. 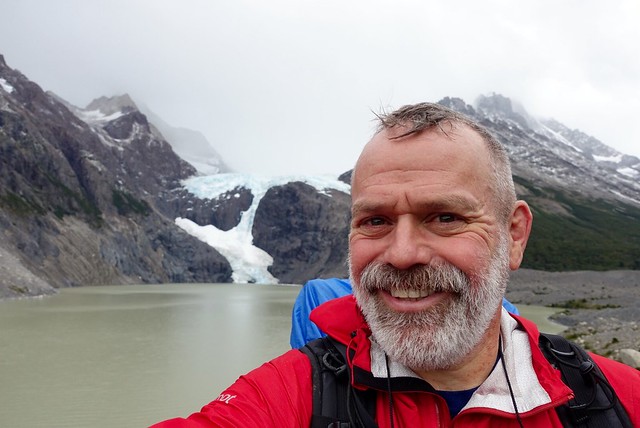 Another half mile, and we were at Camping Los Perros. This is the one spot on this hike where we won't be staying in a shelter--we did rent a tent and sleeping bags and pads, though, and we're pretty pleased to find out they were not only available, but decent quality. The tent is a three man Marmot Limelight with vestibules and rain fly sturdily staked out, the sleeping bags are Marmot Trestles 15 degree bags, and the mats are comfy ridgerest bags. We put our packs in the tent, threw on dry clothes, and warmed up in the bags, eating our brown bag lunch, a surprisingly tasty tuna sandwich from Refugio Dickson (they do good food there). 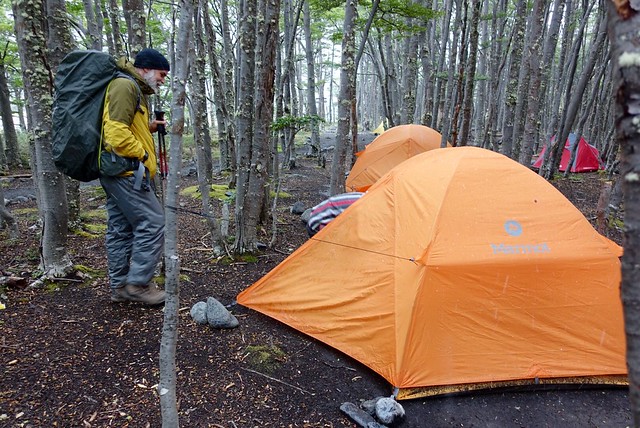 And we both napped... Ahhhh... And then we went over to brave the crowded common spot. Errrr, that was a mistake. The Germans had commandeered enough space for ten people, and had brought.a massive two-burner car camping stove and huge collection of pots and pans and plates and cups and glasses. Really? We made due with a little spot on a corner (no where to sit), heating water in our titanium mugs for oatmeal, and eating it standing up. It was kinda not good, so we scooted back to the tent for our long nap. 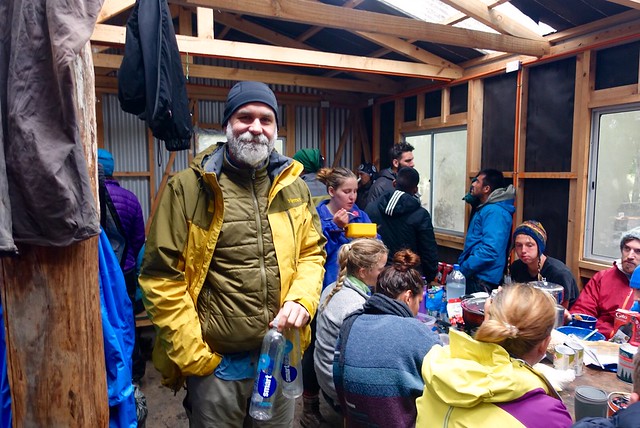 Tomorrow we're heading out early early--it's about 22km of walking from here to Refugio Grey, and the most difficult day of the trip. We're going up and over the steep section to Gardner Pass, another 2000 or so foot elevation gain, then dropping pretty much straight down. It's also a fairly cold and windy section of the park, hiking along the eastern edge of Glacier Grey... We'll be bundled up for sure.

< To Refugio Dickson Up and over Paso John Gardner >