dan.marmot.net
< Up and over Paso John Gardner To Refugio Cuernos > 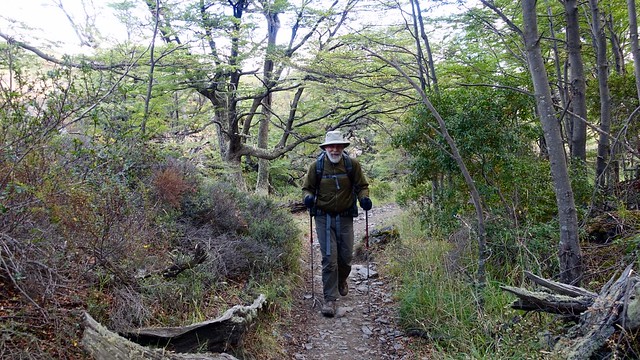 On the way to Paine Grande

Our overnight stay in Hosterlia Grey was very nice, but very stuffy--the rooms weren't well ventilated, and it was both cool and humid. Not quite clammy, but I was in the top bunk and wasn't very comfortable at all in the tepidarium. Our roommates (this was a 4-person room) really tried to be quiet as they got up to go at 6am, a Chilean couple excited to go on the ice hike on Glaciar Grey. We just decided to wake up anyways, and chatted with them a bit, and I learned another word: baton is Spanish (or at least Chilean) for trekking/hiking pole.

Breakfast was the standard ham and cheese and bread and coffee, with that odd muesli/yogurt combo we've seen everywhere here, some strange holdover middle European custom from immigration from some past century. As we only had a half day of hiking, we really didn't care when we got out--the sun sets around 9:15pm, and it really gets dark around 10, so who cares when we get to our next stop. 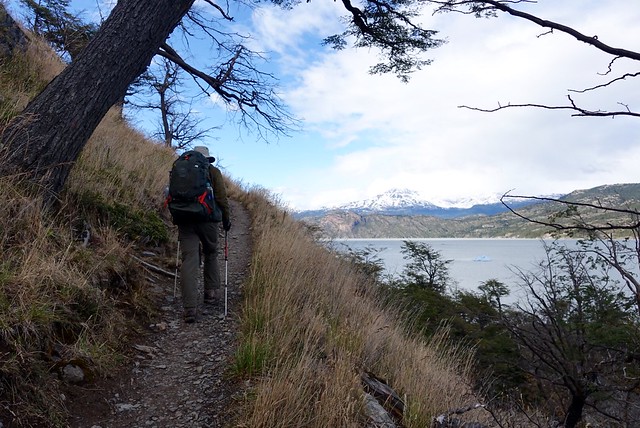 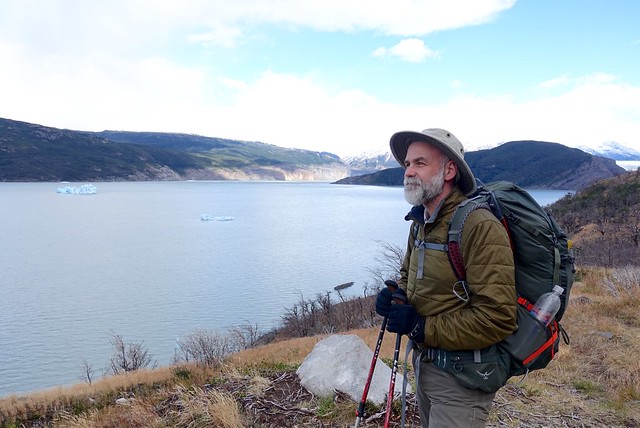 Lago Grey and the glacier that feeds it

After leaving Lago Grey, we immediately entered the burned zone, where some careless camper making a meal burned down most of the forest a few years back. The notro trees were resprouting from their roots, but the nothofagus were toast, just grey skeletal trunks. 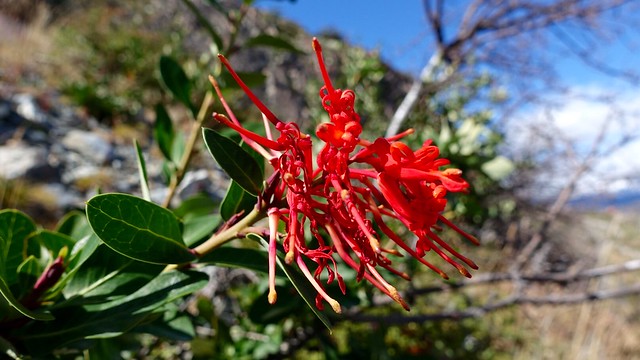 I can't imagine the forest in this climate would regenerate very quickly, and it made me wonder: how much of the planet's ecology has been shaped by human fire, either from oops moments with out of control cooking fires, or from deliberately set fire. I think pretty much all of it at this point, and some places (Australia comes to mind) have had 40 or 50,000 years of human impact. It's the planet's old new normal. It's a bit self-indulgent to talk about the Anthropocene era; it's not like milodons are roaming around this part of the world anymore, and I still wonder what pollinates the red notro and fuchsia flowers I see along the trail. 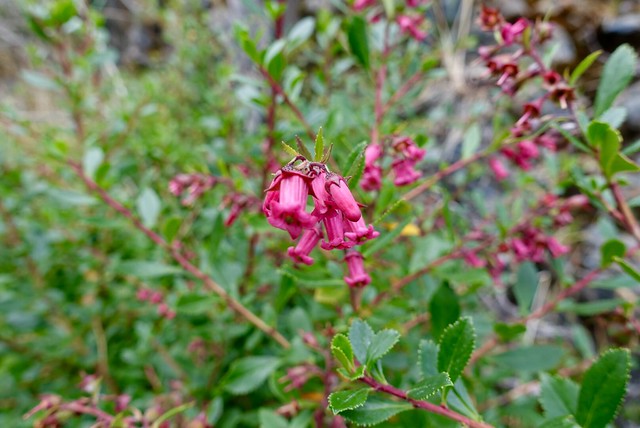 That first mile of trail was a bit... Tedious, thanks to a few Americans, who just couldn't stop talking about investment strategies for retirement. Stocks, bonds, WHAT IS THE RIGHT MIX? A chunky Yank wearing a very tight fitting red UnderArmour tight shirt, showing off his ample moobs and spare tire, was letting everyone within 50 meters know WHAT THE RIGHT THING to do was: "You need to make $120K, no $150K a year, to fund your retirement. And you need to have $1.5 million, no $2 million in the bank when you retire, then you can be happy." From here on out he's the Two Million Dollar Man, and we kept on running into him all the way to Paine Grande--and all we heard out of his money hole along the way was how to strategize your investments SO YOU CAN RETIRE.

Fortunately, the wind had kicked up quite a bit, so we didn't have to listen to unsolicited investment advice as we walked through this spectacular national park--but we did have to step aside fairly often for oncoming hikers, and by step aside I mean pretty much "take fifty steps, step off the trail, take another fifty steps, step off the trail". I think what was happening was that we had encountered the 'catamaran to glacier boat' crowd; it seemed to me that you could take the catamaran to Paine Grande in the early early morning, hike the 11km to the Lodge Grey, then get on the 3 hour boat ride across Lago Grey and the snout of the glacier back to the boat landing at the south end of Lago Grey. That would actually be a pretty excellent day if we weren't hiking... And encountering the dozens of oncoming hikers. I decided to count the number of hikers I passed around mile 3 to 4, we passed 78 other hikers heading north, and 15 that were just resting so I couldn't tell which way they were heading. 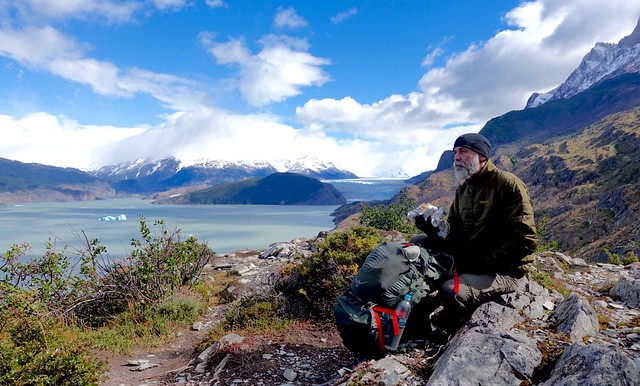 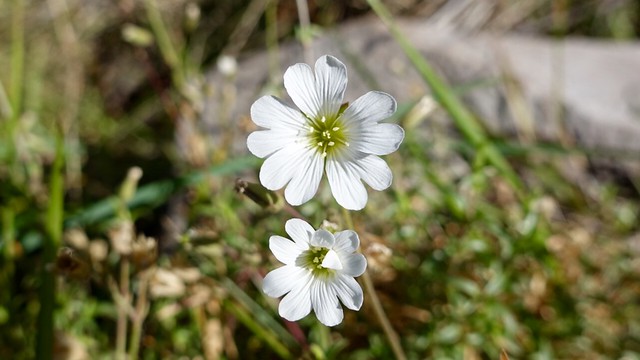 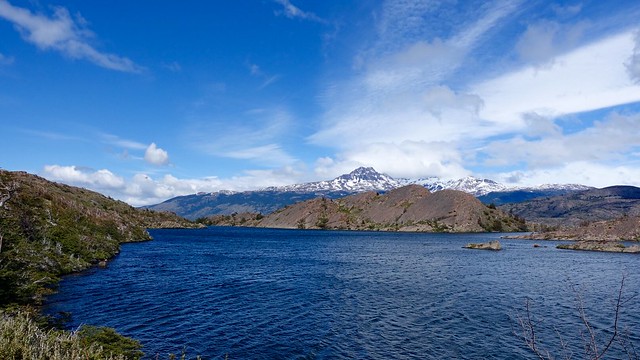 We took a little lunch break and enjoyed some of the last views of the glacier, then headed through uneven rolling terrain, freshly unglaciated no doubt, and through curious twisted metamorphic landscape. The cloudiness had gone away, leaving clear blue skies, but it was still fairly windy, and after we got up and over a ridge the trail tracked down through a scrubby canyon, and the temperature warmed up to 20C/68F. With the wind and the sun and the rocky canyon walls, it felt oddly like we were somewhere in the American southwest, and not Patagonia, and it was easy hiking into Paine Grande. 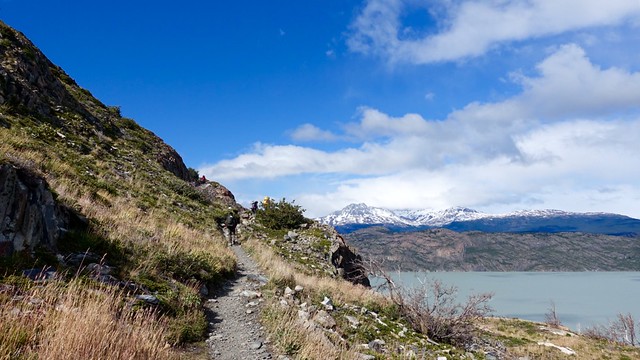 Trail along the lake 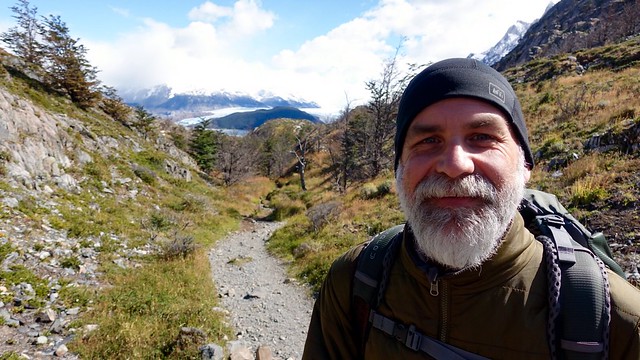 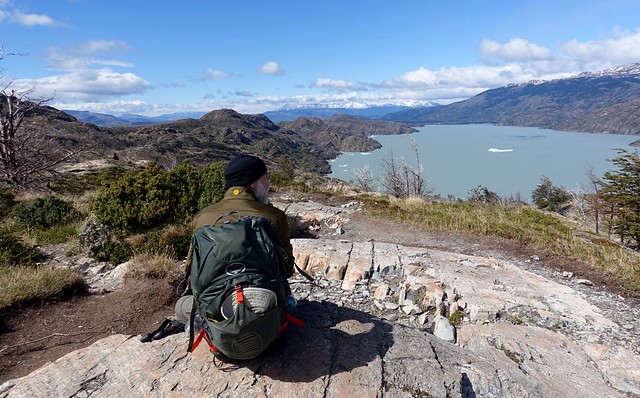 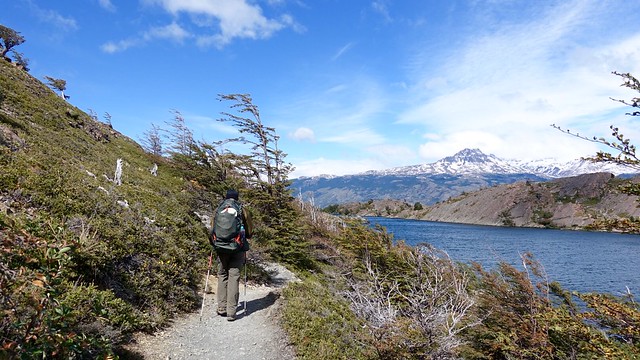 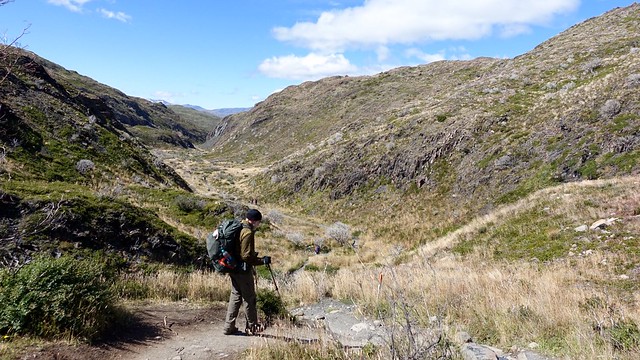 Into the canyon to Paine Grande 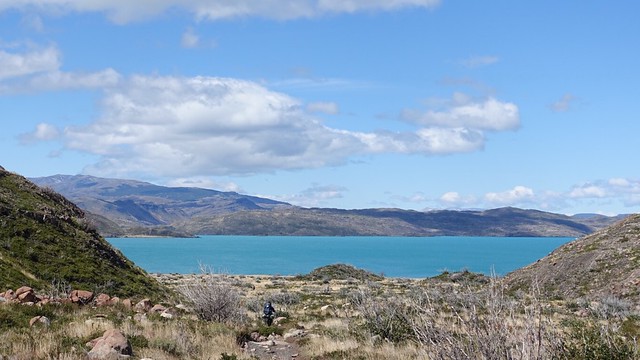 We had heard stories about Paine Grande on the interwebs: many of them said "it's a shithole", but we found it quite comfortable. Built in 2003, it feels like an ski hostel from the 1980s, with a confusing angular layout and odd common areas scattered about. We scored a two-person room (bunk beds) at checkin, with yet another impossibly high top bunk for me. Note to bunk bed builders: the top bunk does not need to be 2 meters off the floor. 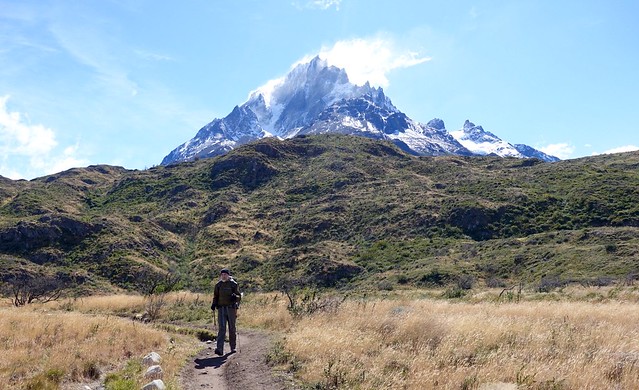 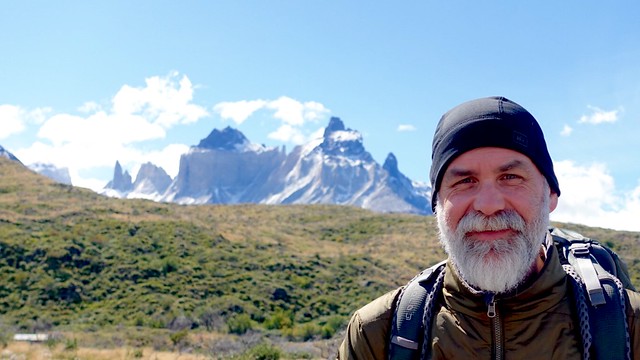 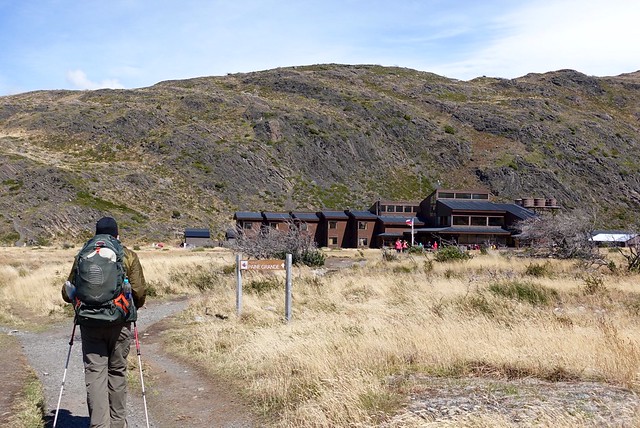 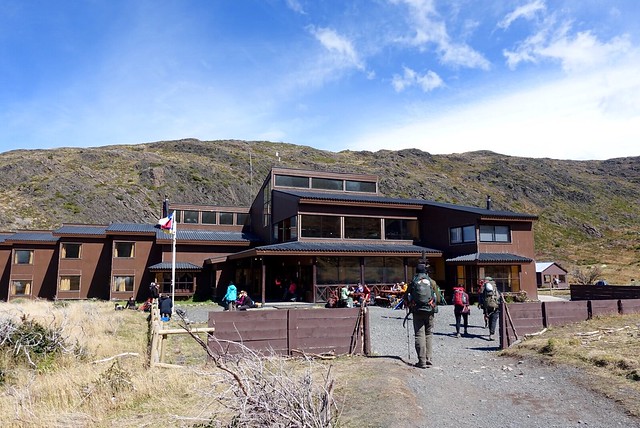 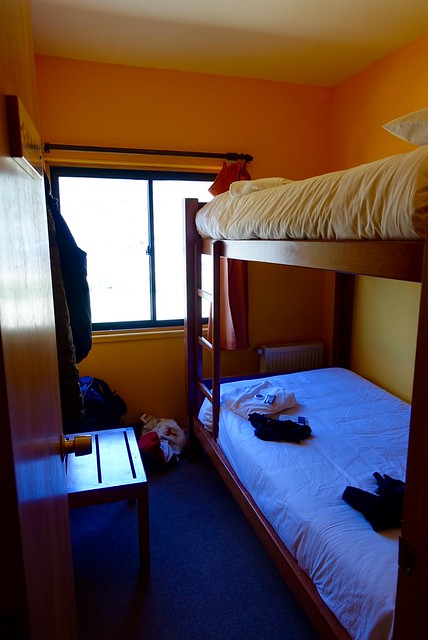 After checkin, we sampled some beverages at the minimarket, and wondered when the upstairs bar opened: the chalkboard said happy hour was from 5 to 7, but the opening hours were from 7 to 11:30. Hm, the staff said 7, sigh. But it opened at 6, and we enjoyed 2 for 1 sours from our perch above the entrance and watched hikers arrive. We saw two of the German girls, yay, at least they made it over the pass, but they certainly did not look happy at all. I guess the third girl from Team Deutschland with the huge stove was far behind, as per usual. 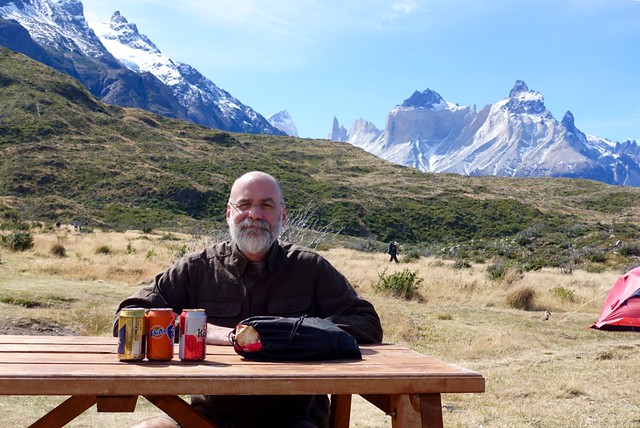 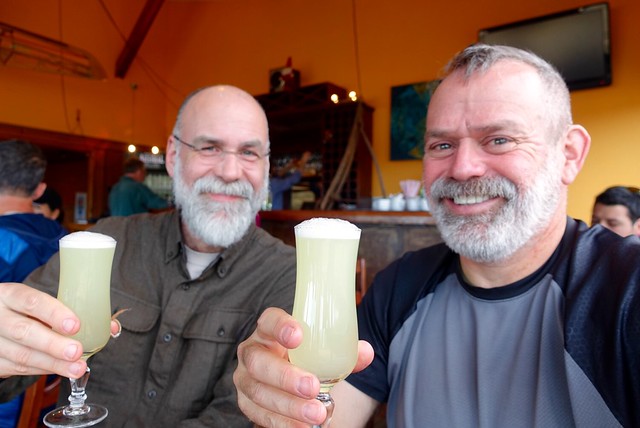 Dinner, once again, was bland but enjoyable, more chicken with rice, and asparagus soup. 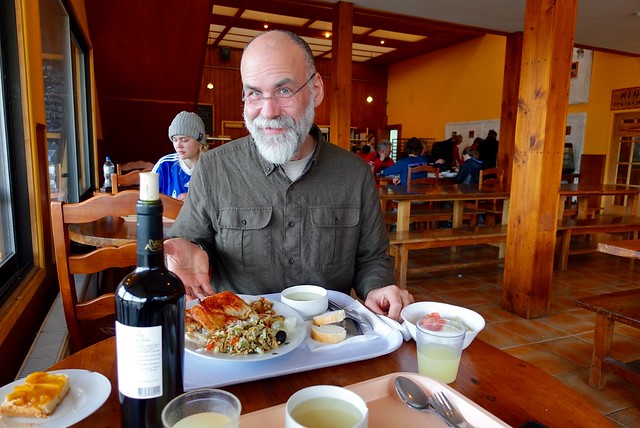 Dinner at Paine Grande was tasty

I took a little walk after dinner to enjoy the horizontal sunlight on the cuernos--the golden hour really is the golden two hours at this latitude--and then we both headed to bed. 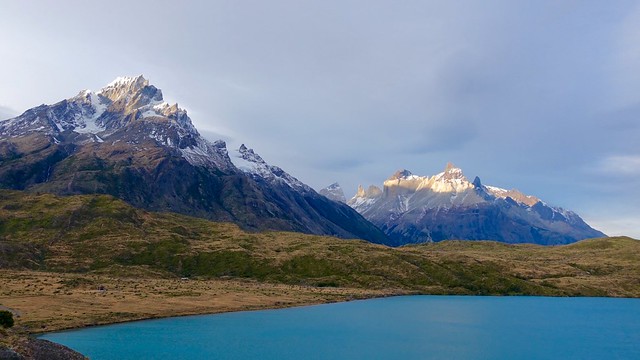 < Up and over Paso John Gardner To Refugio Cuernos >