dan.marmot.net
< To Rainy Pass Beyond the last road in America > 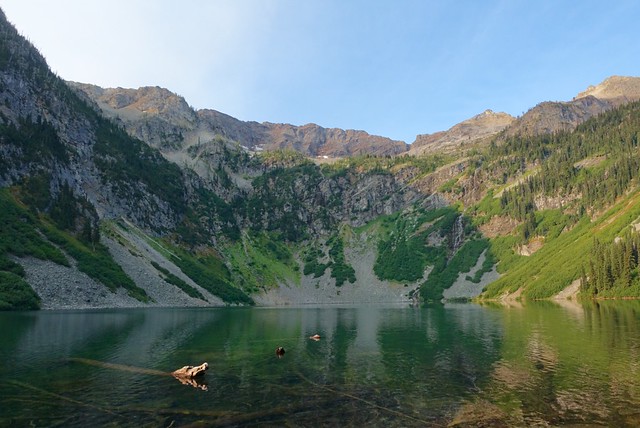 Last night's campsite at Rainy Lake was wonderful--the waterfall at the end of the lake made a wonderful white noise all night long, and I was far enough away from the highway that I didn't even hear any Harleys thundering by. The only disturbance was a doe, browsing around the tent, at 5am, just inches from my head. From my position in my sleeping bag, looking out the mesh top without my glasses on, I half-thought she was a kangaroo; their heads are strangely similar. I was too sleepy to wake up, so I dozed another hour. She was still there, checking me out, as I made coffee. Strange how animals really don't get the concept of "inside", even when I turned on the stove full blast in my tent she didn't flinch... it took the zipper opening on the tent door and my head popping out to get her moving. 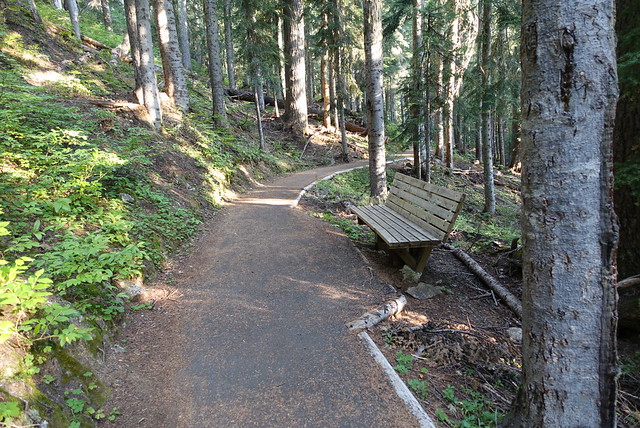 Looking across the lake, it was another bright blue cloudless day to begin, yay. I packed up and got on the "trail" at 7:30, with the doe following me to the benches. I thought I'd see where this strange paved wheelchair friendly trail went, rather than bushwhack back down the hill--hey it was fast and level and smooth. It led to the picnic area on the west side of the highway, I crossed the road to the east side of Rainy Pass where the PCT trailhead was. 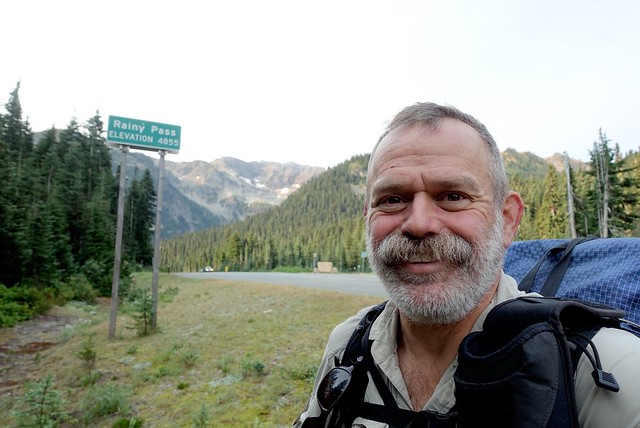 It was Saturday, and the PCT trailhead parking lot had a good two dozen cars in it; no doubt due to the dry fine weather. Some smoke haze had drifted in from the south, an odd blue-gray layer hovering around 6000 feet, obscuring many of the peaks nearby and yellowing the sunlight. I headed on up the trail to Cutthroat Pass, through the nice shade--it was already approaching 70 degrees, a bit warm for hiking. 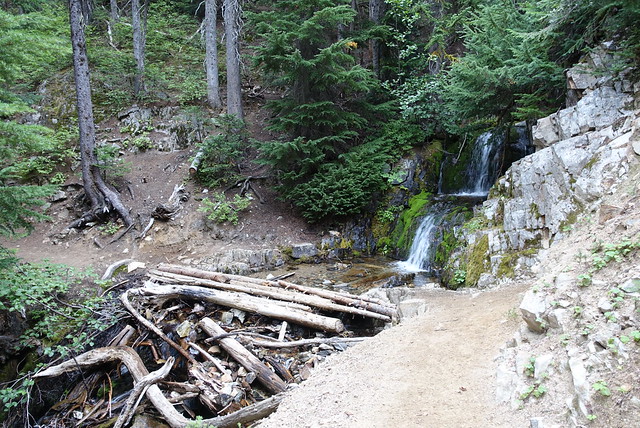 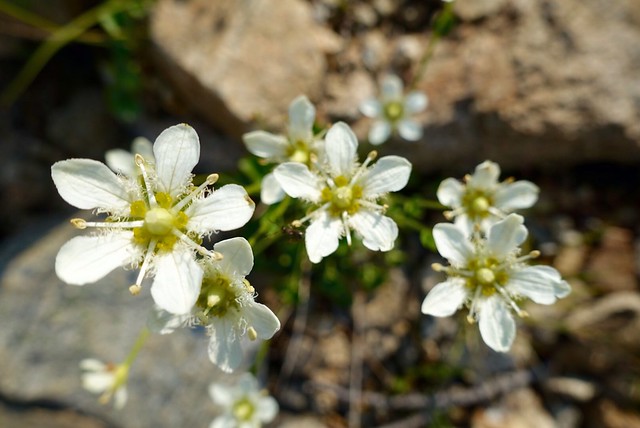 Cutthroat Pass was a few miles away, and some 2000 feet up in elevation--that meant punching into that smokey layer, which was getting denser and denser as the morning went on. Ugh, I could feel the smoke in my eyes and throat, and wondered how many millions of PM2.5 particles were embedding themselves in my lungs, like a bad air day in Beijing. The scenery was very spectacular from the top of the pass looking east, rounded yet jagged mountain ridges, fading into the blue-gray haze, deep U-valleys below. And there were huckleberries, yum, I ate quite a few of those :-) 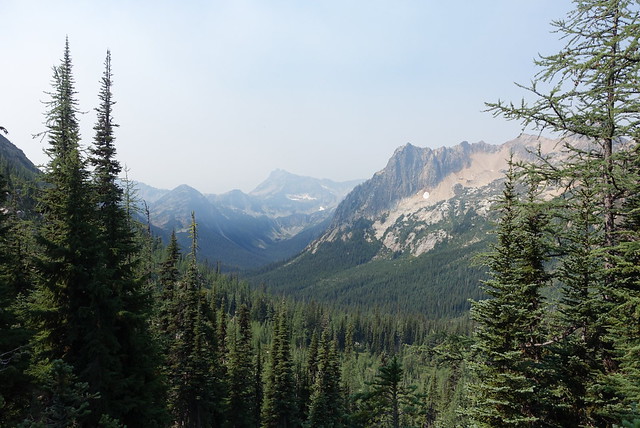 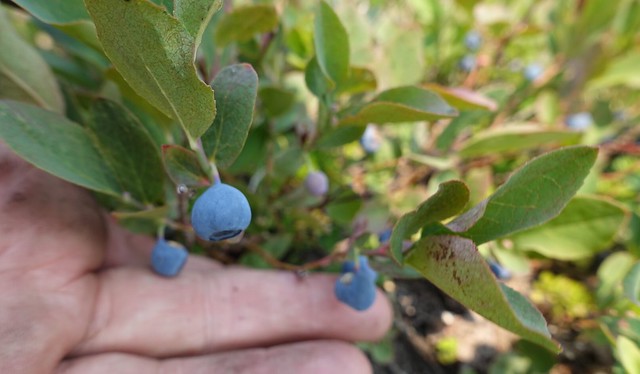 The trail leveled off, contouring along a slope, cutting through a saddle then unexpectedly dropping down into Granite Pass. It was pretty warm--80 degrees--and very smoky by this point, giving me a bit of a headache. Thunderclouds were building up as well, and I actually started hoping for rain. Maybe it'd clear this gunk away, though maybe there'd be dry lightning too which means fire, and this forest is super-dry and just feels like it's waiting to burn.

I've got four days left on the PCT, I thought at lunch... and started thinking about all the unexpected turns I've had on this journey. The first few weeks were straightforward, a decent shakedown--then that strange late season April snowstorm in the mountains above Los Angeles had me scooting for cover. I made it over Forester Pass on April 30th (insanely early), and out to Independence--and skipped out due to May snows. Then in early June there were the remnants of Hurricane Blanca I encountered north of Yosemite; since when do hurricanes hit the Sierra? The early July heat exhaustion on Hat Creek Rim north of Mt Lassen really threw me off kilter. And then there was the blahs I was dealing with, when I decided to do the bits of the PCT that really interested me, to close out this journey with some sense of accomplishment and feeling that I've seen what I've wanted to see.

Right now and for the past few days, it's dealing with wildfires and drought and heat in one of the coolest and wettest corners of the world. Go figure, but all these things are what they are. Much of my trail time is thinking of alternatives plans, lining up three or five, turning each option over and around and then just meandering onto the next option. From the outside, some of these 'decisions' may seem ad-hoc and impulsive (and sometimes they are!) but more often they're more or less ready to go. 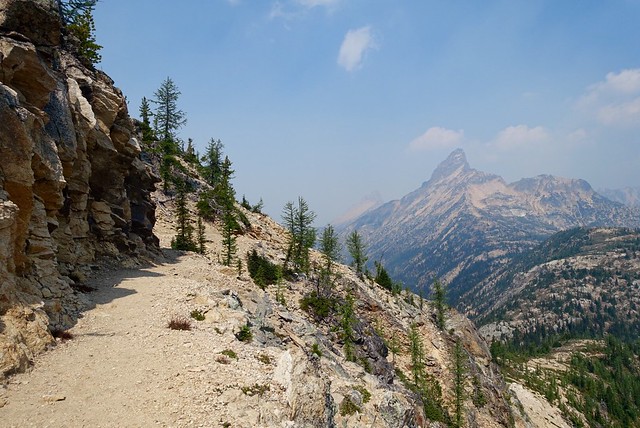 After lunch and Granite Pass, the PCT traversed along a long southerly slope, under Tower Mountain, a huge bulky peak looking not unlike a model for the Paramount Pictures mountain. Both the smoke and the rainclouds had thickened, adding a certain sultry atmosphere; I was reminded of a warm dry winter day in the tropics, with the smoke from the fields of rice or cane or corn filling the air. It made me want a margarita. 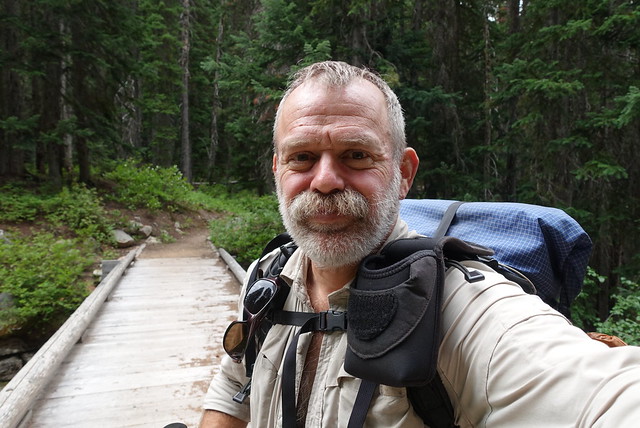 After Methow Pass, though, the air cleared up fairly quickly, and the trail descended steadily down along a river valley for several miles. There were quite a few blowdowns, and I banged my right knee on a branch as I hopped over one--ow!--and decided it was a two naproxen moment. I'm 55 miles from Canada, a banged up knee is not going to stop me now. I finally made it to Brush Creek bridge around 5:45 and snagged a most excellent campsite, complete with a bench from the bridge decking and a few log chunks for tables. I did my camp chores of filtering water, washing my feet, charging the devices, making dinner, it was all good and peaceful. A Scout troop set up camp nearby around 7:30pm and I chatted with the Scoutmaster; they're out of Bellevue and are doing a three day hike from Harts Pass to Rainy Pass. 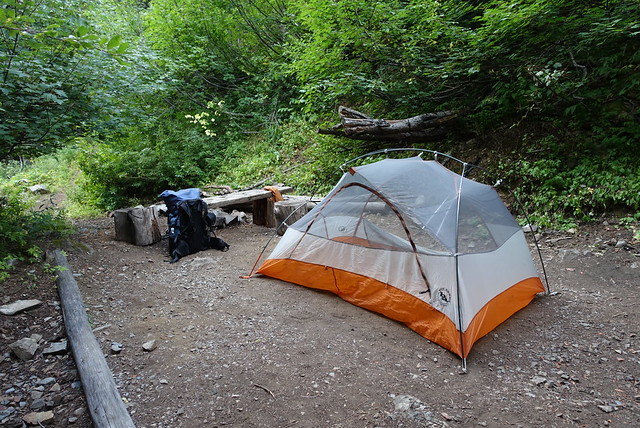 Tomorrow will hopefully be an early day. The weather report is for 30% showers each day, it sprinkled on me a bit today as I headed into camp around 5, so it'd be wise to get to camp earlier in the day rather than later. There are just 54 miles to Manning Park now, and the way the campsites are laid out makes the game plan of 18/21/15 days, arriving im Manning Park on Tuesday. I'm thinking it'd be real nice to lounge around there and take a swim or a hot tub when I get to the Manning Park Lodge, then I'll scoot into Vancouver on Wednesday... and be done with the PCT.

< To Rainy Pass Beyond the last road in America >