dan.marmot.net
< Hot and smokin' north of Rainy Pass Borderlands of the Pasayten >

Good day of hiking through great country, near Harts Pass

This morning started off cold--brrr, down in the low 40s--and I didn't have that many miles to hike. I was aiming for 18 miles and at my typical pace I should get there around 6pm or even earlier, so no need to rush. I snuggled in my warm sleeping back and read some more novel ("Seveneves"), watched the intact morning moon rise high in the east through a cleft of sky, between two firs, and tried to remember from the days when I was a spacecraft pilot why it's not a good idea to do burns at perigee, something to do with uncertainty around nozzle direction methinks.

Despite my laziness, I did get on the PCT right at my typical time of 7:30am, passing the Bellevue scout troup with all their big bear canisters lined up in a row, a large breakfast production. I had a Strawberry Bliss Pro Bar instead, and hiked up the shady trail. It was actually cold today as I topped Glacier Pass at 5500 feet, though the glaciers I could see were just barely clinging on. Another hot dry summer like this one and they'd be gone. 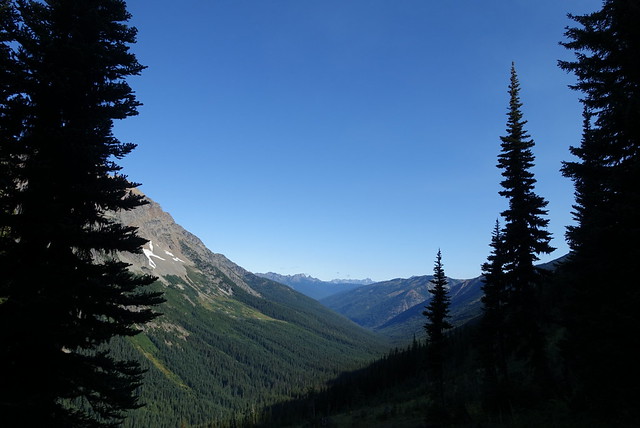 For some reason I thought that Glacier Pass was going to be the high point of the day, but nope, the trail kept on going up the mountain beyond the pass, with the scenery opened up more and more to the west, beautiful blue skies, with a threatening tongue of smoke wafting in from the Wolverine wildfire, now 30 miles or more to the south.

Grasshopper Pass seemed like a decent place for a stop, as the trail finally crested, with a view towards hazy ridgelines east and a more clear view north towards Harts Pass. The PCT clung to the east side of a series of mountain peaks, ducking in and out of drainages and meandering through sparse larch groves that must look spectacular when the larch needles turn golden and drop in the autumn. 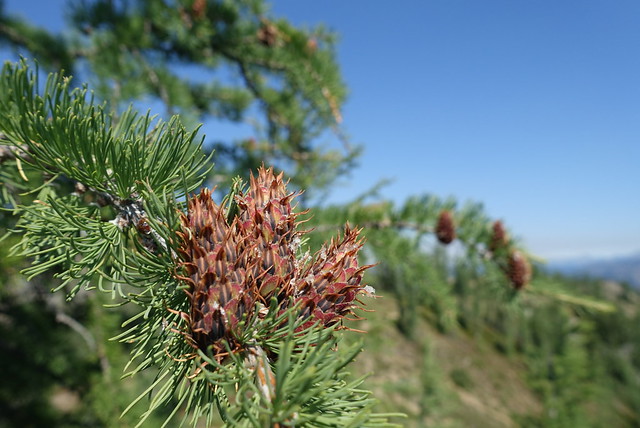 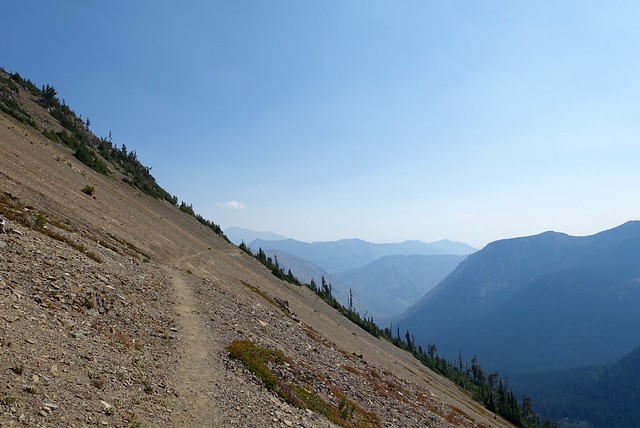 After I rested, I moved on--this side of the mountain was sunny and much warmer, with a dry easterly smoky breeze blowing upslope. I did start to worry about water a bit. Many of the 'seasonal creeks' were dry, and while I had a liter of water it was still six miles to Harts Pass, which may or may not have water. That liter should hold me though... then I spotted some day hikers getting water just below the trail at a springlet, and followed their lead and filtered another liter just in case. 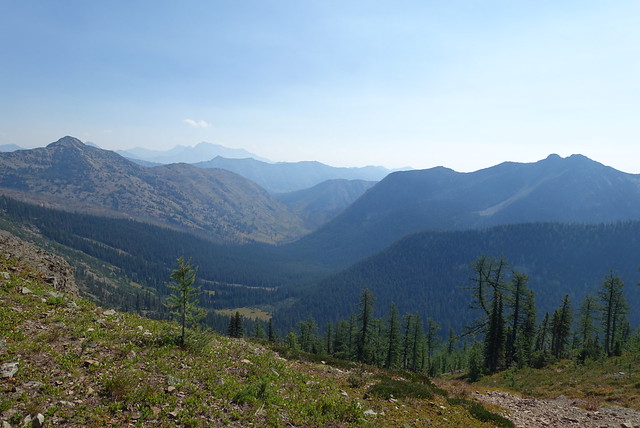 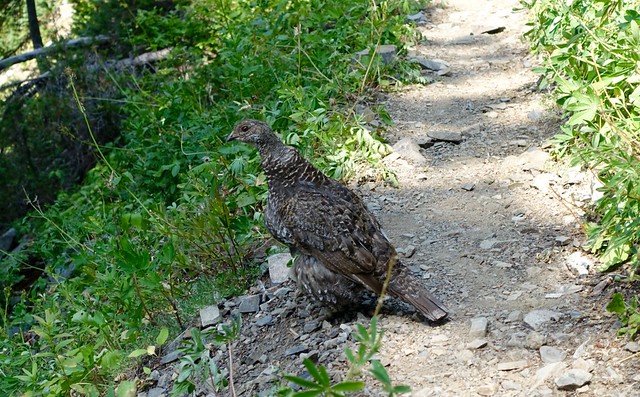 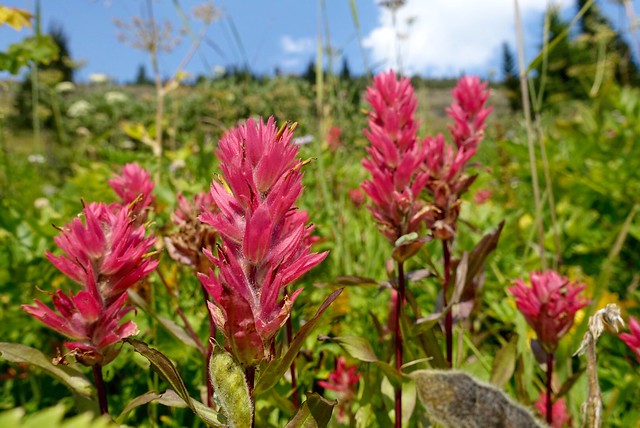 Harts Pass is the most northerly road crossing on the PCT before you enter Canada, it's a dirt road, and at the pass there's a small drive-in campground with a toilet (yay) and picnic tables (yay yay), both luxuries on the PCT. That was my afternoon rest, just relaxing at the tables and eating a bit of jerky, some dried figs, and a bag of Skittles in my favorite flavor, tropical. There's also a small 'guard station' run by the Forest Service at Harts Pass, which struck me as curious. What are they guarding against? Who knows, but the guards were an older couple in lawn chairs, and we chatted about wildfires and such. They said that Stehekin might be evacuated soon; I wouldn't be surprised, and wondered if Stehekin would be one of those places I've been to that doesn't exist as I remember it, like Donetsk. 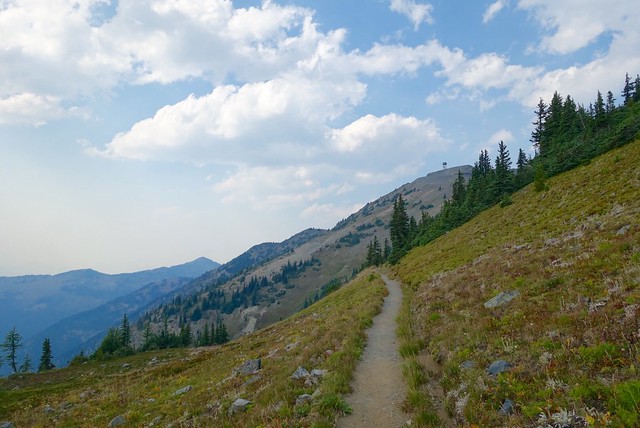 Past Harts Pass, the PCT enters the Pasayten Wilderness, which I've heard is wonderful: remote, wild, isolated, scenic. It is--rounded mountains and valleys, lots of views, and the Pasayten is in a bit of rain shadow from the Cascade crest further west, so it's drier as well, making for less dense forest and more open views. The landscape wasn't desert-like at all, which I was kind of expecting, instead I found high grassy meadows, with open forest, from what I've seen so far. I grabbed a liter of water just past the Harts Pass station in my dirty water bag just in case I needed to dry camp later.

Along the way, I bumped into four hikers: Gene, George, Geff and Monkey Boy. They were just doing a longish day hike from Harts Pass (from what I gathered). When I told them I was hiking the PCT long distance, they kinda gushed a little bit and said Wow and asked me all sorts of question and offered me some tasty hummus and pita bread, plus an apple. Thanks guys, it all was great!-- sorry I'll be missing your cocktail hour at your campsite back at Harts Pass. 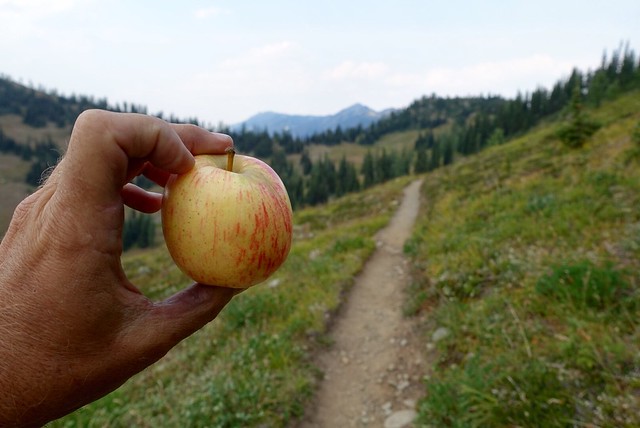 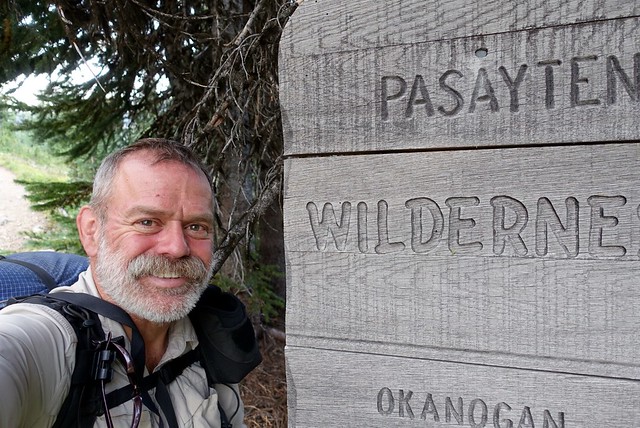 I was going to camp below Tamarack Peak, with a stream nearby, but the campsite was open and exposed and not that appealing... with two liters or so of water, I decided to pop over the ridge, there were a few flat spots that looked decent for camping in the next mile and a half. After a mile, I spied a campfire ring with rocks for seats just off trail, perfect. It even had a stream trickling next to it. Time to camp; it was a pretty good day. And it didn't even rain today, clear skies, so I'm going to chance it and leave the rainfly off. Tomorrow's my last full day on the trail. I'm excited and a bit pre-nostalgic that my PCT journey is so quickly coming to an end. 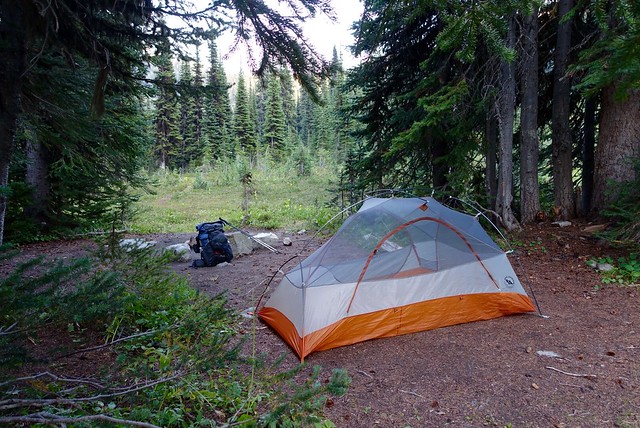 < Hot and smokin' north of Rainy Pass Borderlands of the Pasayten >