I slept pretty horribly last night--the people in the unit above me kept on scuffing chairs on hard flooring in the middle of the night. What were they doing?? Plus it was really hot in my room, so I let all the windows open which helped slightly... and which helped me get out of bed at 5:30 as the housekeeping staff started their day in the laundry next door. 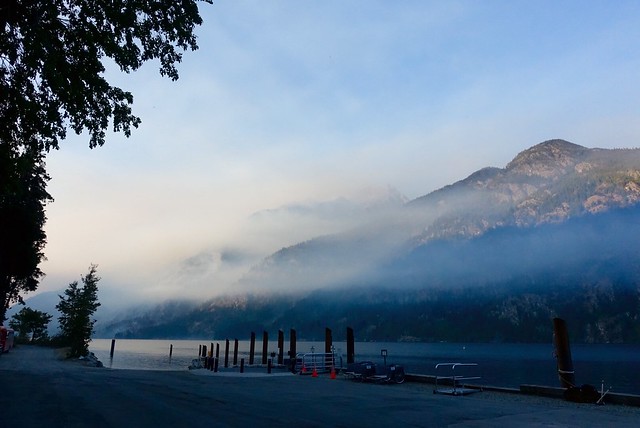 I was mentally raring to go... yet my body still wanted to sleep. Yeah, I could've lazed around, checked out at 10:30, taken the midday shuttle to High Bridge. Or I could shower and pack and hand the keys in and walk the 1.9 miles on flat paved road to Stehekin Pastry Company and get a coffee and a sticky bun and get on the 8:20am shuttle to High Bridge and the PCT. Caffeine is very motivating, so I walked that 1.9 miles in just over 35 minutes--it was more a speed walk than anything, even without my performance drug of choice. 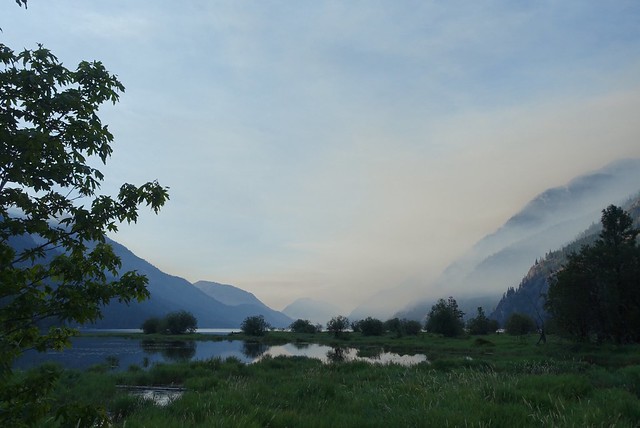 The top end of Lake Chelan was wonderfully atmospheric, blue smoke from the wildfires hanging in layers around the upper end of Lake Chelan, golden reddish sunlight filtering through. It was all teal-and-orange coloring, oh-so-popular in modern films yet I realized its not a new look--the landscape I was looking on was strongly reminiscent of a romantic 19th century landscape painting of the American West, on a huge 10 foot by 20 foot canvas at the Huntington or Smithsonian. 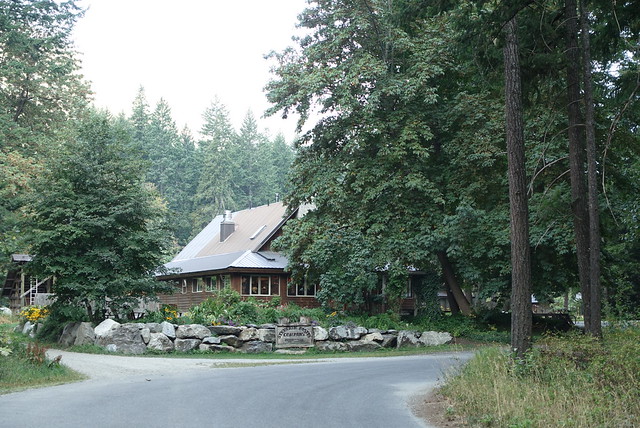 What was not so wonderful was all the smoke I inhaled on my powerwalk, blech, but my scratchy throat went away with a few cups of coffee and the sticky bun, which indeed was as tasty as advertised. 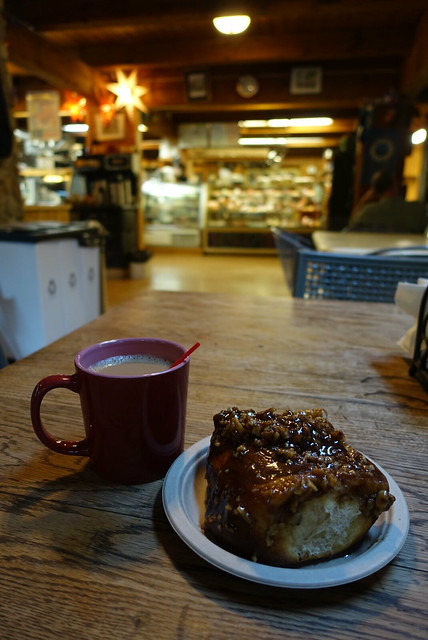 I overheard two men bitching about their Internet hookups, which up here are satellite. Stuff goes up over the phone line, comes down via the satellite dish. Very tedious and high latency. One of them wished for high speed options (streaming Netflix, he said, would be so much better than DVDs in the mail), the other said "Be careful what you wish for, the Internet ruins everything." Hah, indeed that's true; the Internet does take away immediacy and the visceral experience of being in the place and moment. 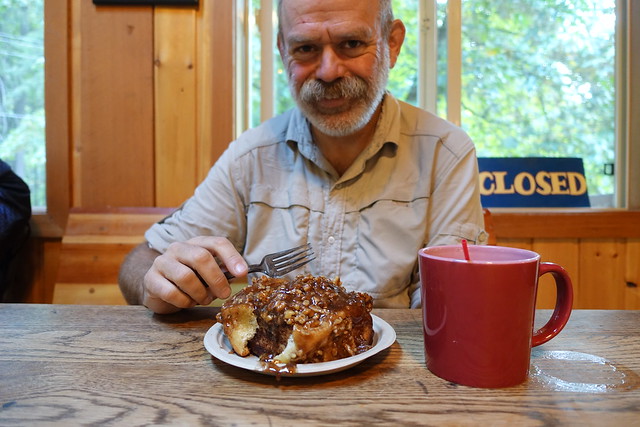 I was well into my fourth up of coffee when a shuttle went by and didn't stop--did I miss it? "No! You're fine!" said a woman's reassuring voice from the kitchen, reading my body language as she manipulated some dough, and added "They're just shuttling firefighters around. The real shuttle will be by in a few", and indeed it was; I hopped on and drove up to High Bridge past cabins and homesteads and organic rows of veggies and stuffs (was that an alpaca corral?). It was all a bit "Northern Exposure", quirky and cute. Yep, the Internet would ruin this place; it'd just become a fancy remote workplace for Seattlites with the seniority to mandate their own work/life terms to their employers, putting themselves out to pasture. 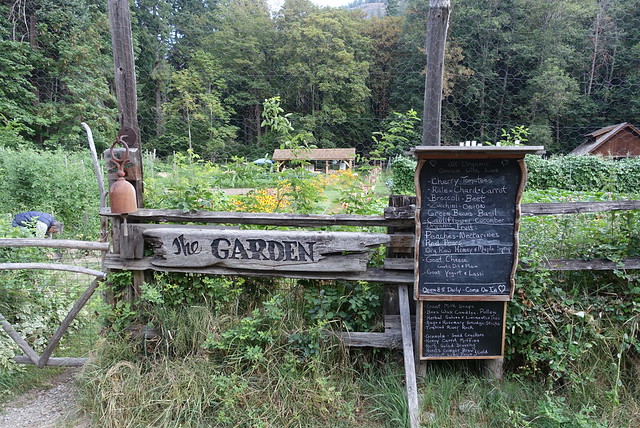 At High Bridge, the shuttle dropped me off, and a southbound PCTer with a teeny pack and even teenier running shorts got on. "Is Stehekin worth going into?" he quizzed me. "Yep, it's super-scenic, and there are great lunches and treats at the bakery!" "Is it expensive?" "Well, $3.75 for a sticky bun, to me, is pretty reasonable." That satisfied him and he got on the bus; I looked for signs of the PCT but the hand-drawn map on the info boardwas confusing--which way is north?--and finally I think I saw it between two buildings? Is that the well-beaten trail to the outhouse or the PCT? Well... it looks like the outhouse trail (might as well use it), oh surprise, it's the PCT as well, strangely heading up a hill along the side of the valley, eastwards back towards Stehekin. A small suggestion to and Forest Service and state park sign makers: a lot of PCT hikers can't (and don't care to) wrap their heads around your very local maps. They don't care about where this building or bridge is, they don't want an overview or lay of the land or figure out that the High Meadow Stream Forest Trail is really the PCT. All PCT hikers want to see is that rounded PCT shield, or that white reflective diamond, or even some sign with PCT -> scribbled on it with a Magic Marker.

So anyways, the trail lead up from High Bridge, moderately, for the rest of the 18+ mile day. Just up and up, never very strenuous, from 1300 to 4800 feet elevation. 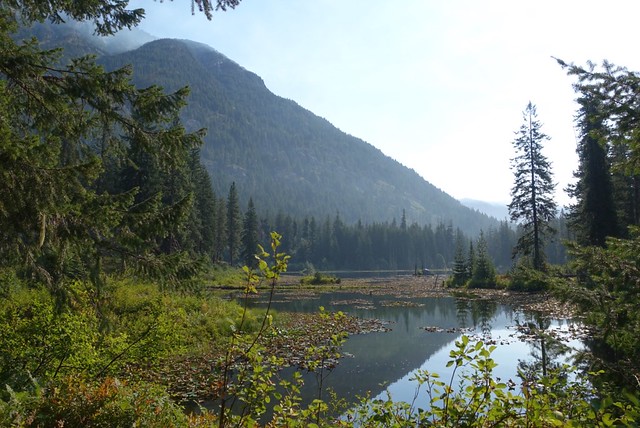 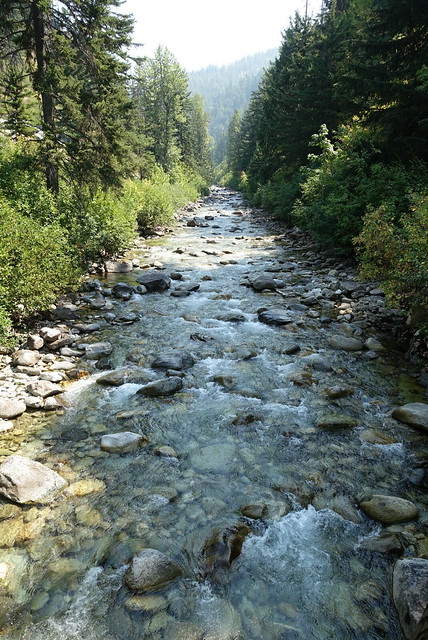 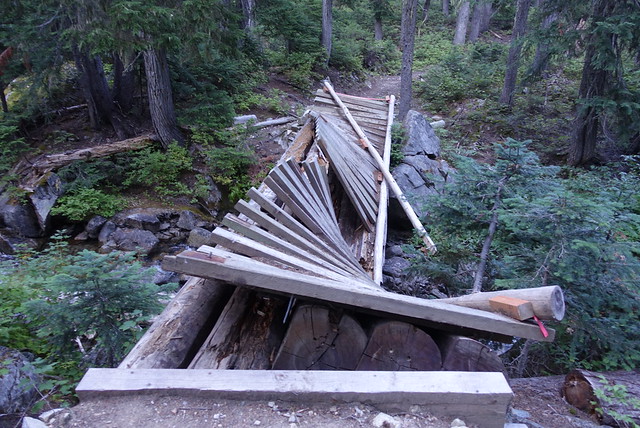 There wasn't much of note--the scenery was steep, it was hot out so it felt like the Sierra, water was fairly frequent, and the trail just followed the bottom of the river valley. Yes, it was pretty, but not especially scenic... I was somewhat disappointed. The forest was very dry, huckleberry bushes all shrivelled and brown, vine maples turning red, other plants just dropping their leaves to cope. It wouldn't take much for a wildfire to get going there.

Oh, wait, there is one more thing to note: trail trash. Since leaving Snoqualmie Pass, I've seen more trash on these Washington sections of the PCT than anywhere else. It's about one annoying piece of trash a mile: from candy bar wrapper snippets to empty sandwich bags to soda bottles to used duct tape, but most of all used nose tissue, yuck. Today's strange trail trash was a couple of panty liners (unused), yeah, trailside pantyliners. WTF, Washington hikers--stop trashing your trails. After picking up four or five pieces of trash I just suspended my litter rule ("if that piece of litter annoys me, I'll pick it up"); I'm not a trail janitor.

I got a permit yesterday for the Hide-A-Way campground in the North Cascades National Park, but I got there pretty early, just after 3:30pm, and knew it wasn't time to stop. I walked by and decided to head for Rainy Lake; the topo map has a little dashed line indicating some sort of trail up there and it's only 1000 feet off the PCT proper, and away from the noise of Highway 20.

When I got to the outlet of Rainy Lake--a fairly vigorous stream--I searched briefly up the trail and didn't see anything and decided that the 'use trail' wasn't going to be found, probably some old fishing trail from the 1950s, those topo maps are often more than half a century out of date. So I bushwacked the thousand feet to the outlet of Rainy Lake--what a scenic lake, with a glacier overhanging it way up high, a waterfall at the far end, and deep clear greenish water. I didn't see any obvious flat or dry spots to camp, though, and the last 100 feet were pushing through the willows and alders to a log-choked outlet. There was something off to the northwest side though, some rocks-in-cages thing with something wooden on top? Maybe a fish hatchery release pen or something? I gingerly walked across the logs clogging the shoreline, and made my way up to... a paved pad with a pair of wood benches, an interpretive sign, and a paved trail heading down. Grrrr. Guess I didn't search hard enough for that use trail; this paved path even looks wheelchair accessible. Should be an easy walk out in the morning then!

A bit of poking around behind the pad, along the lake, scored a very nice and private campsite for the evening. Yay! Glad it's not raining at Rainy Lake either. Looks to be clear starry evening. Good night all.