dan.marmot.net
< Into the Alpine Lakes Wilderness To Deception Lake >

Man, this scenery is great--there are lots of pretty views, no nagging mosquitoes, and a few people out and about but not many. 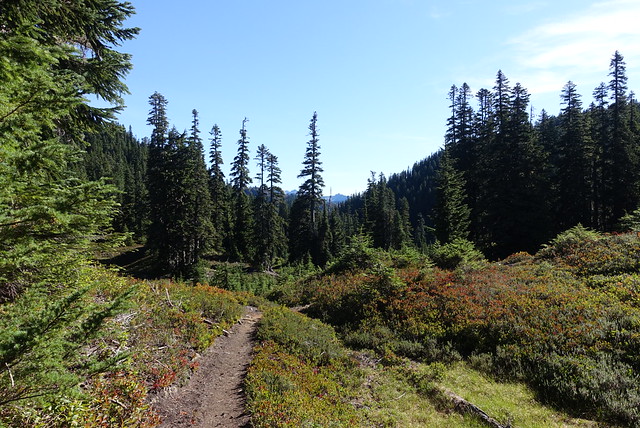 PCT on an already warm day 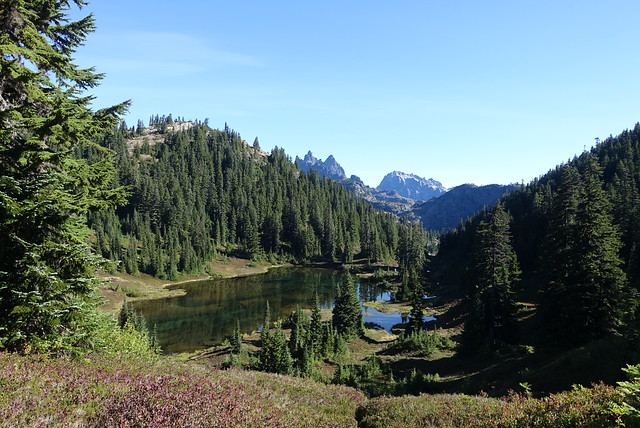 I was very relaxed, and didn't really get out of camp until 9, after two cups of coffee, two poptarts, and two packages of Quaker Instant Grits, with some huckleberries added from some nearby bushes. Yum. I don't know why grits aren't eaten more, especially with berries in it: my grits today tasted like cornbread muffins with blueberries, and I even put a dash of olive oil in the grits to make it even creamier. Yum.

It was just a mile or so up a gentle ridge to a spectacular overlook looking over Spectacle Lake; I just had to snap some pictures and then ran into Goldilocks and his daughter coming up the trail. 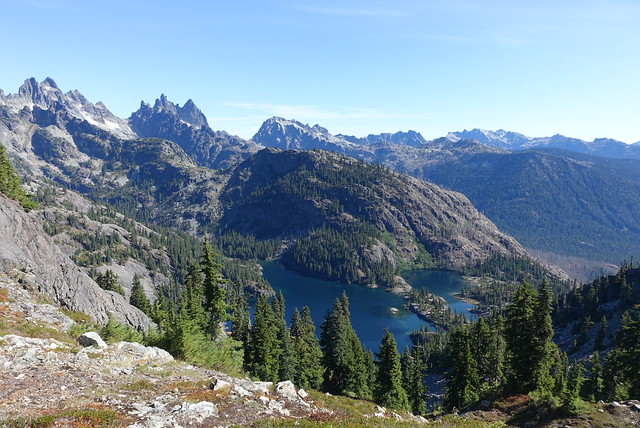 Goldilocks! I'd seen his name in the water report back in April, he was always a few days ahead. He's made it all the way to the monument (aka Canada border) and is now yo-yoing back. I complimented him on his shoes (Hoka Challenger) and he laughed, he likes them well enough but wishes they had more cushioning. We had a longish chat about trail weariness too: he said "Yes, it's hard to keep from getting bored weeks after weeks, so I get off the trail and reset my attitude! I've done it four times!" I know that feeling very well, indeed, and today my attitude could best be described as lightly euphoric. 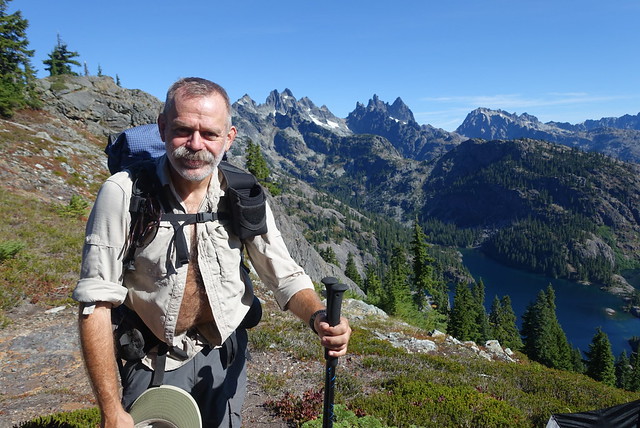 Me above Spectacle Lake

After I said goodbye Goldlocks, the trail headed down and down, then through a burnt area, down to a confusing junction with a trail off to Pete Lake--the PCT was the very unkempt trail, and in the next half mile there were about half a dozen downed trees to scramble around. Feh. On top of that, one of my trekking poles broke, grrr. It didn't snap in two, the carbon fiber didn't split or fray, instead the inner metal sleeve that joins two segments together wedged itself all the way into one section, leaving nothing for its joining section. Ah well, that pole worked well for the last 1800 miles, can't really complain. 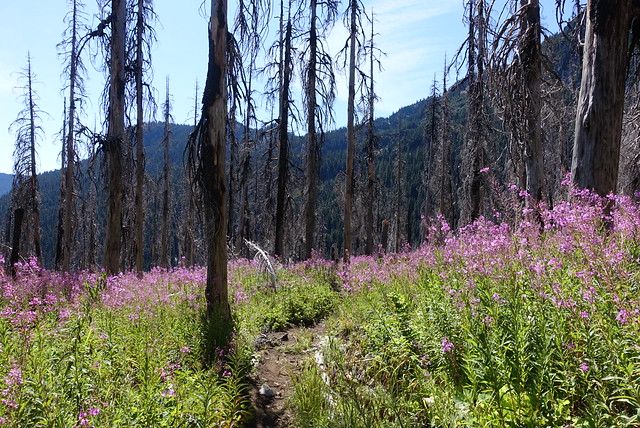 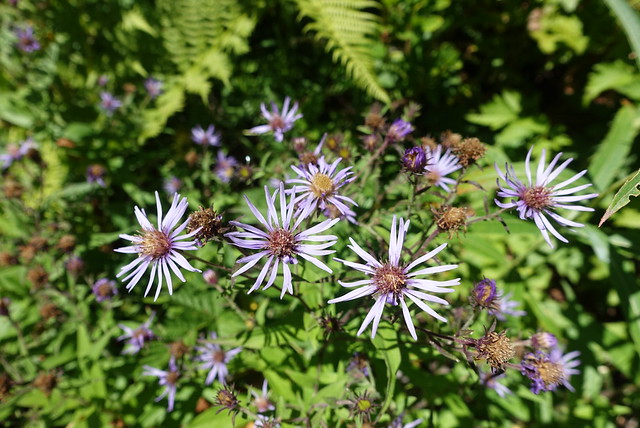 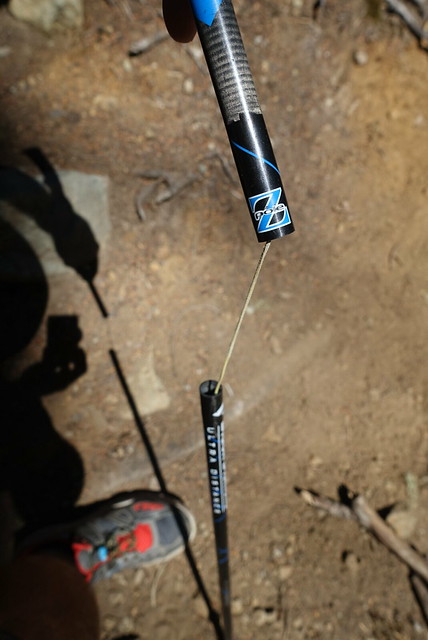 I stopped for lunch just after a creekside crossing, but packed up after five minutes, damn flies. There's some peculiar species of fly in these parts that likes to park itself in an orbit around your head, never landing, just annoying. I climbed up to the next creek crossing and grabbed a couple of liters of water. It's 90 degrees out and I'm drinking about 1 liter per 3 to 4 miles; I'll need it on the seven or eight miles ahead. It's going to be a switchback afternoon, up and over then down to the Waptus River. Going up was pretty scenic, with glaciers off on the ridge to the west, but also pretty hot. 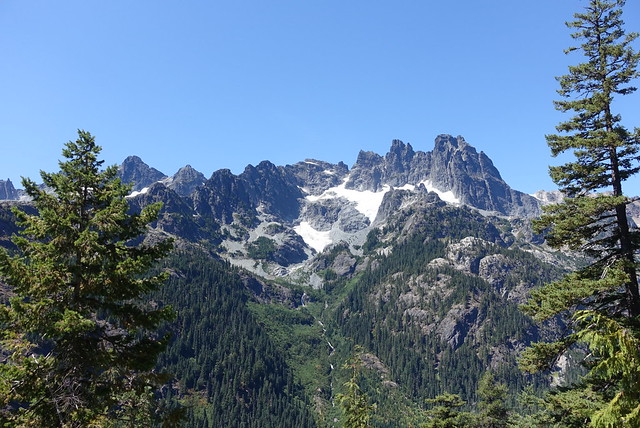 Glaciers on a hot 90 degree day

PCT along a high traverse

The PCT descent down 2500 feet in elevation was shady and easy, though parts of the trail were overgrown with thimbleberries and brush, I was kind of glad it wasn't wet and misty as I'd be soaked. Yet more F-18s flew low overhead, destroying the wilderness feeling for a second day in a row. Can't the Navy find some other place to waste taxpayer money than right where I'm hiking? Waaa! Those planes cost $50,000 an hour to operate, I was thinking a better use of the $50,000 would be for a trail maintenance crew.

I made it down to the Waptus River, down a shady dry slope, where the vine maples were already showing their autumn colors due to the heat and drought stress. I wonder how much longer the PCT will even be open through this section if these temperatures stay this warm. 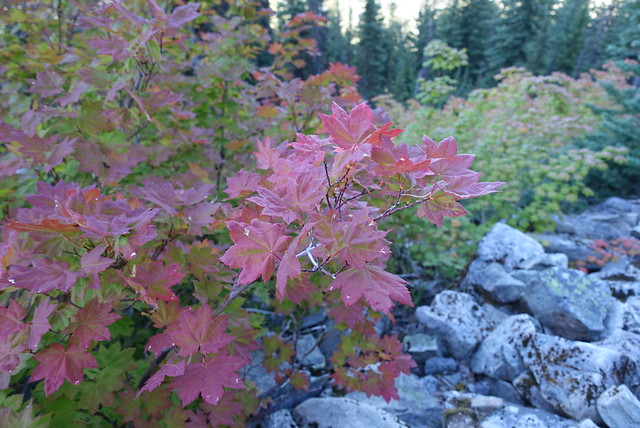 So dry out. Vine maple changing color in July 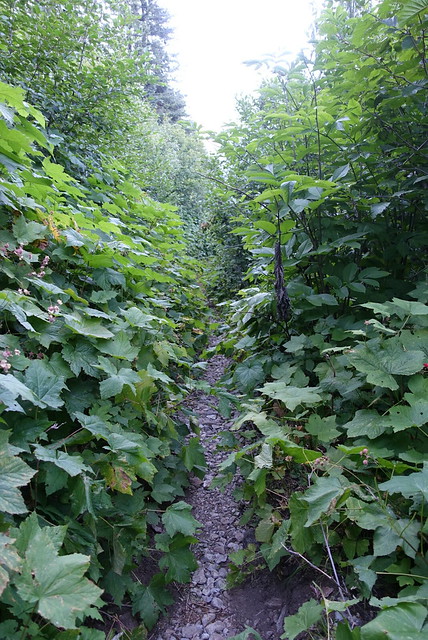 Sliding through the thimbleberries

The campsite that I planned on staying at was already occupied--I found two campers inhabiting four tent sites with their two tents and laundry on rope and cooking area and stacked firewood. I said hi, but neither camper heard or even saw me; both had earbuds in and head bopping to some music. Ah the wilderness. 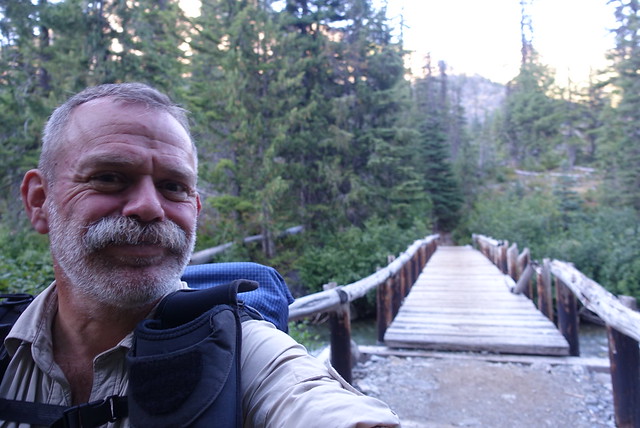 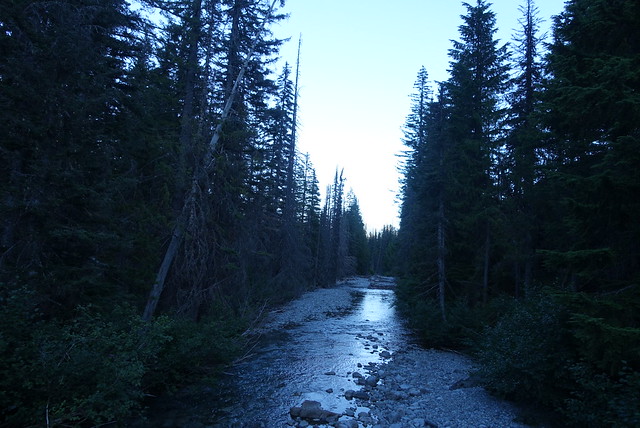 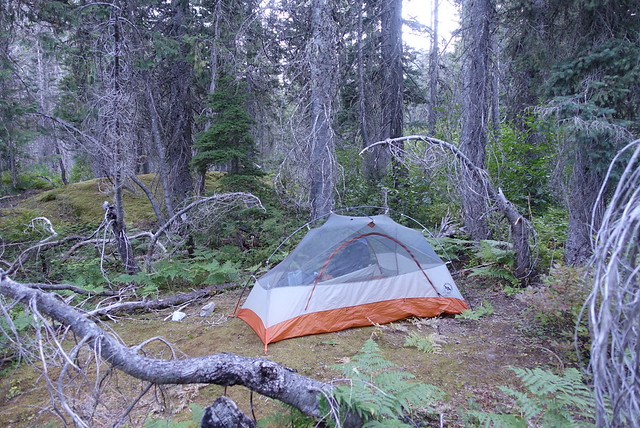 I kept on going a few hundred yards and discovered a nice mossy patch of level ground for the tent. Nearby was a nice pool to rinse off my sweaty clothes and body, ahhhh that was great--water not too cold, and I even dunked my head. I've been really enjoying the past two days in the wilderness, despite the occasional roar of jet engines a few hundred feet away. This feels like the same excitement I had when I started the PCT back in March.

< Into the Alpine Lakes Wilderness To Deception Lake >