dan.marmot.net
< Hike up Mt Ellinor, with goats To the Waptus River >

A stunningly scenic day, rejoining the PCT east of Seattle after breakfast with Eric, and walking along ridge lines in the warm sun. Plus huckleberries.

Once again I pretty much nodded off at midnight... and woke up excited at 6am, packing my backpack and getting on I-5 north after a bit of scavenging in the car food bag for a pre-breakfast snack. Yep, two sticks of string cheese and an apple will do.

I did dawdle a little bit to let traffic moderate, but knew that it would take me an hour to drive the 22 miles into Seattle, and it did. I pulled up Waze just to see how much time it would save, had I just gone up I-5 it would've been 85 minutes to drive those 22 miles. I've always thought Seattle is one of those cities where there are five ways to get anywhere, none of them really any good, and with subtle time-of-day differences that only a longtime Seattlean can discern. Waze routed me to the car rental drop off at Pike (or Pine?) and Boren kinda interestingly, with a nice tour of the east side of "King County International Airport" and 14th St and Beacon Hill. Made me wonder what international flights depart from BFI, though with a British Airways Concorde on the ramp some do arrive (and just never leave, hehehe)

The good man Eric Crossman swooped in and picked me up on the corner, and we scooted over to Flo's for breakfast. Yum, salmon benedict and orange juice and five cups of coffee, and I was still hungry so when Eric offered his two slices of toast I was very thankful. 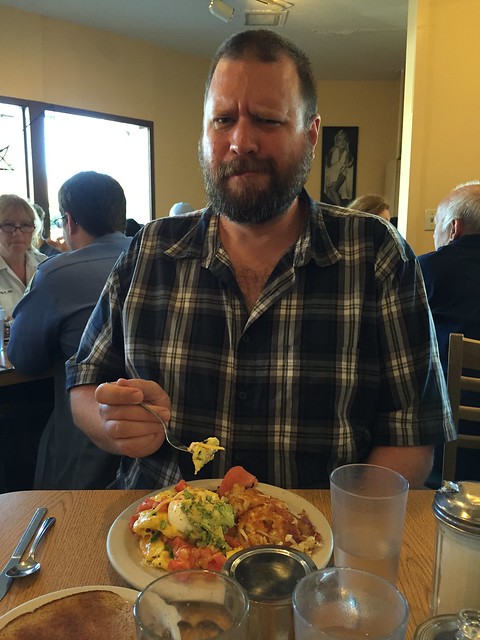 Eric and breakfast at Flo's

It was good to briefly catch up with Eric... and after the nomming it was up to exit 49, Snoqualmie Pass, and the PCT trailhead. Just like yesterday, it was really busy, with maybe 30 cars in the lot. It's Tuesday noon, people--why aren't you all at work? Then I thought "duh I'm not at work either". 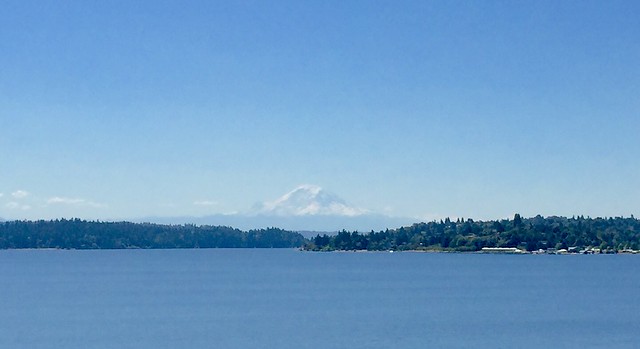 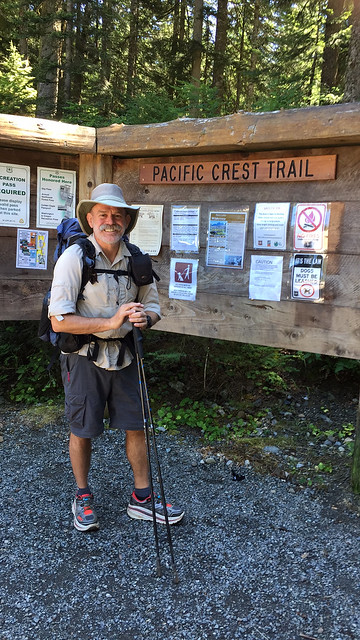 I hitched up my pack and headed up the trail, though the wet forest, up and up, very green and lush but not much to see. The roar of the Interstate was audible for the first six or seven miles as well, but after the 5th mile or so the views really got great, so it wasn't like walking through the roadside forest. 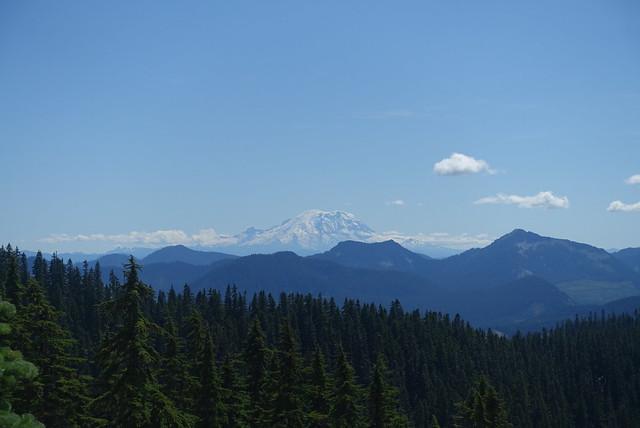 Those great views as the trail ascended steadily were south--the huge bulk of Mt Rainier dominated the horizon, some 60 miles away, rising above the Snoqualmie Pass ski area and I-90. To the north was a jagged red mountain, and east and west were dark rocky steep ridges that plunged into glacial valleys, often with lakes. The sky was almost entirely cloud free, the sun was shining, it was 75 degrees, it was great to be out on the trail. 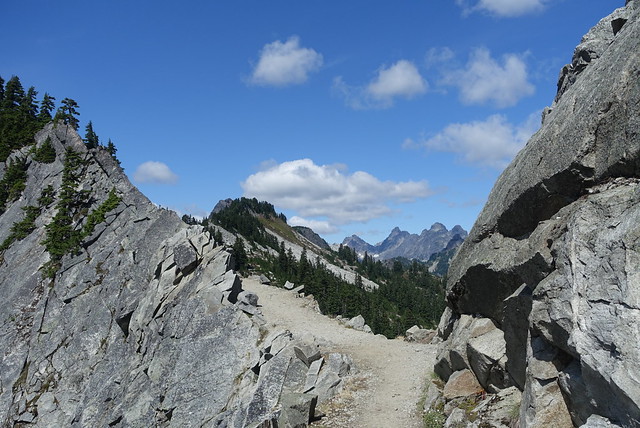 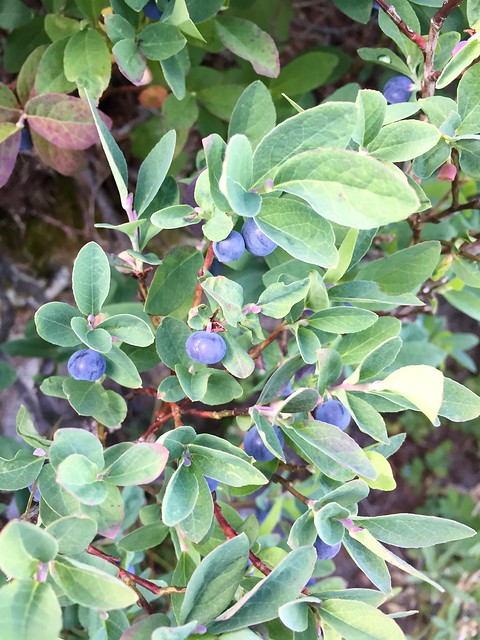 Trailside treats, ripe for the picking 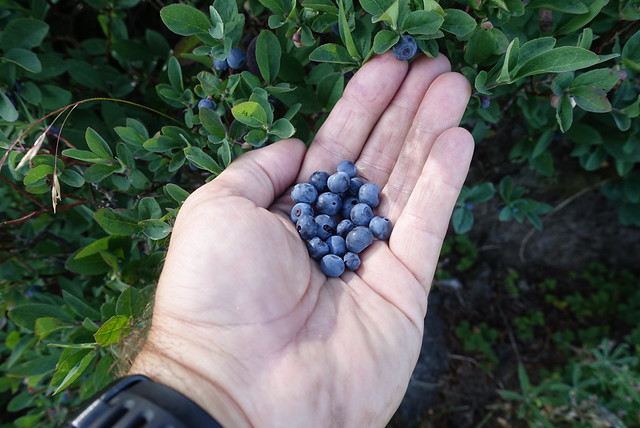 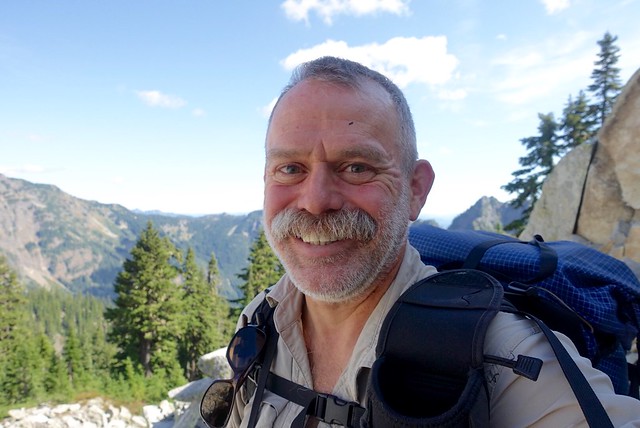 Happy to be out there

I was very casually strolling along as well, taking pictures, looking at the map, chatting with a few of the dozens of day hikers heading back to the trailhead, there were a lot of them. I didn't have anywhere in particular to be today, and was hoping to make 15 miles or so by the time I stopped hiking around sunset. This section is just 72 miles from Snoqualmie Pass to Stevens Pass, so 15 miles will leave 57 more to split over 3 days, or 19 miles each day. Easily doable, espcially with the long daylight hours. Sunrise is around 5:36am, sunset is around 8:45pm, so that's a bit over 15 hours of daylight--lots of time to walk. 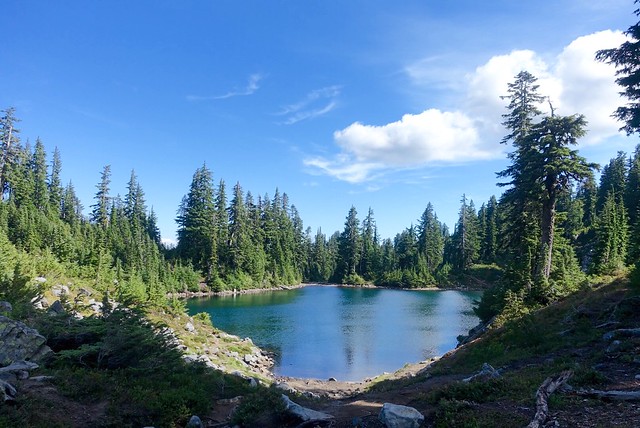 Looking south along the PCT north of Snoqualmie Pass

The PCT was wonderfully designed in this section, with that steady gradual incline, and soon it was tracking along a ridgeline above a series of lakes and valleys. Really pleasant, I was enjoying it very much, particularly as the highway noise faded--though two F-18 fighter jets decided to spoil the wilderness by flying a few hundred feet over the ridge I was on. Really guys, don't you all have the state of Nevada to do that? V. annoying. 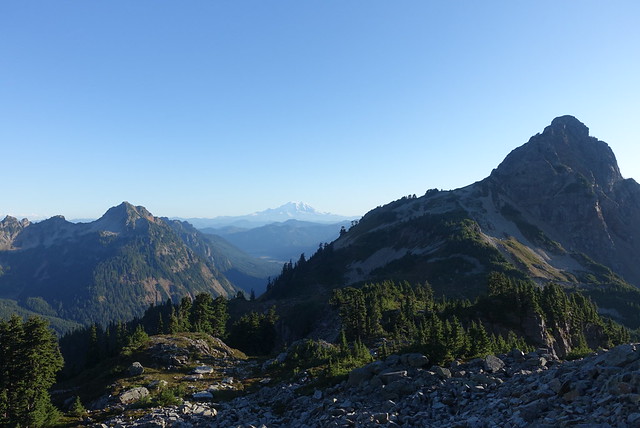 Mt Rainier is still out 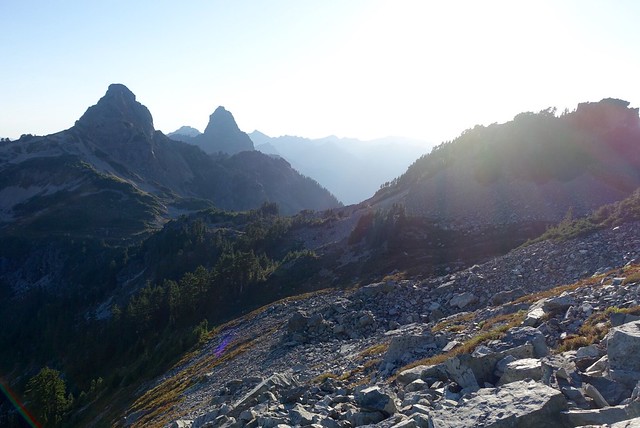 My mood returned to normal pretty quickly, though--soon the trail got high enough to see Mt Adams far to the south, and just after that Glacier Peak popped up on the northern horizon. Yay, more volcanos. How many recent or active volcanoes does Washington state have anyways? Five? (Adams, Rainier, St Helens, Glacier Peak, Baker). Maybe there's more.

The sun was setting, and at this latitude it takes awhile, making the Golden Hour more like the Golden Two Hours. The trail stopped its ridgeline track and headed east through a few miles of somewhat loose rockfields--not my favorite--and then descended down into a drainage. I got to that descent just after sunset, and stopped yet again for awhile to pick huckleberries. Yep, they're already ripe! Yum. 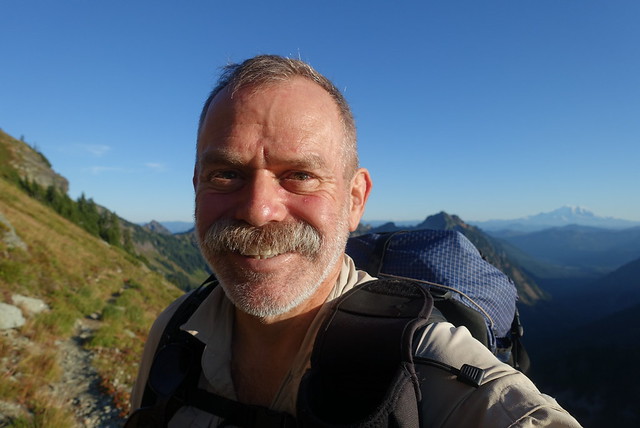 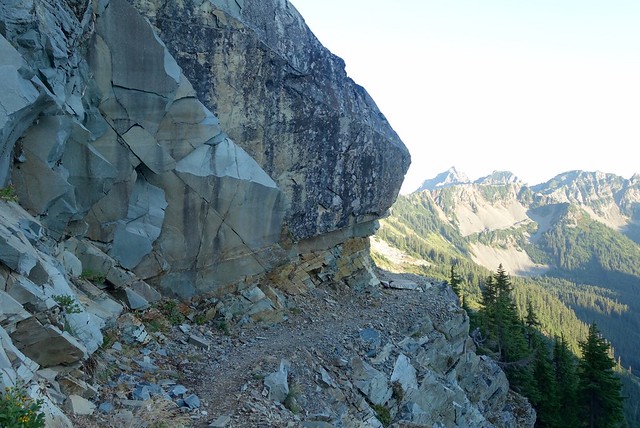 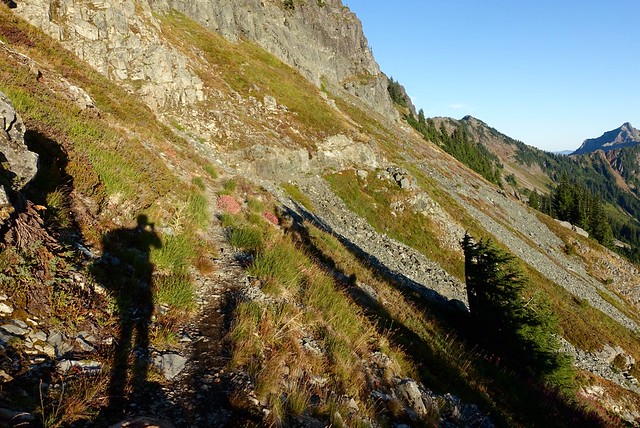 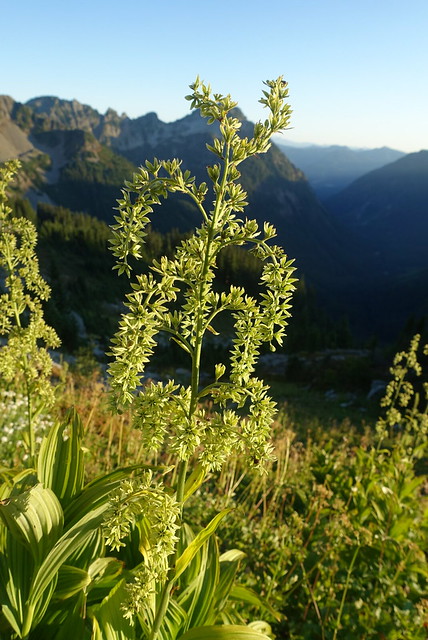 I found a pretty decent campsite soon after and camped. I was wondering if anyone would be there--it's a campsite near "spring-fed pools"--but nope, no one's around. That's fine by me; I can sleep in a bit and get going on my own schedule and make those 19 or 22 miles tomorrow. I like that. 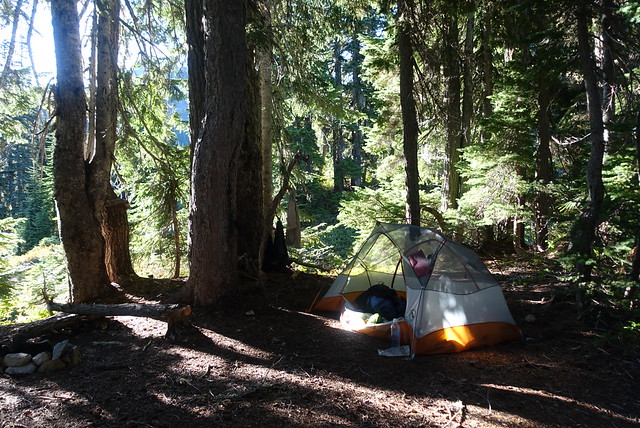 < Hike up Mt Ellinor, with goats To the Waptus River >