dan.marmot.net
< Across the Siskiyous, Day 2 Into the Alpine Lakes Wilderness >

Today was my last hiatus day away from the PCT. I wanted to do a hike, but really didn't want to drive a couple of hours over to a trailhead on Mt Rainier (it's always an hour further drive than you want it to be). The lightbulb went on when I thought "I could see the Olympic Marmot!", a species of marmot that's only found in the Olympic Mountains, which are both closer to me and less crowded. I'll find some trailhead on the east side of the mountains--maybe near Quilcene--and look for Olympic marmots.

I dropped by the Olympic National Forest headquarters and scanned a big info board out front, and trail #812 to the top of Mt Ellinor was a 'medium' hike, 1.6 miles to the top and 2000 foot elevation gain, near Hoodsport. Sounds great; I chatted with the receptionist and she told me the annual National Parks pass is good for trailhead parking too and gave me a hangtag holder for my car mirror. Handy.

But first, ugh, gotta make resupply boxes for the PCT, one for Skykomish later this week and another for Stehekin the following week. There aren't really any resupply points on the 240 miles of trail between I-90 and Canada, so this morning was figuring out how much food I'll need to buy, dinners and snacks and such primarily, hitting Safeway on the way out of town and then parcelling the packages into two Priority Mail Large boxes, the flattish ones with the self-sealing tape. That took me much longer, and I wasn't done with the post office in the cute town of Shelton until 11:30.

At least the weather, though, had cleared up, bright blue skies with a cloud here and there, not the dark gray skies this region is infamous for, and I drove the car over to the upper trailhead for Mt Ellinor and parked next to a dozen (!) other cars. So much for a quiet remote hike on a weekday afternoon! 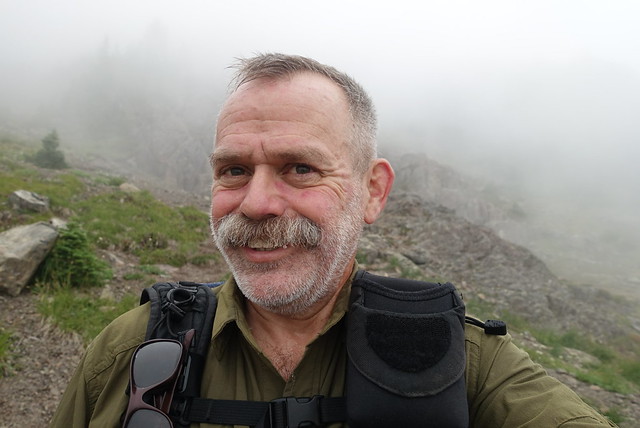 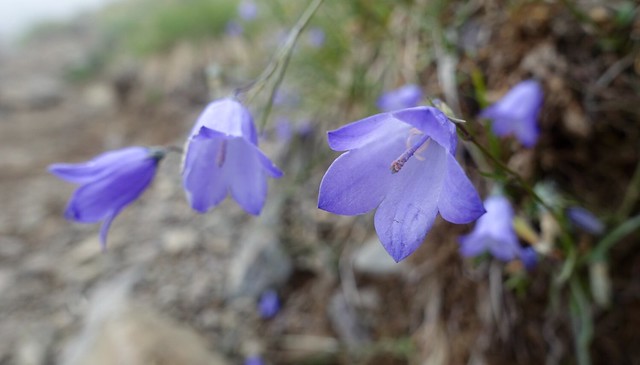 There was a warning sign about how to deal with mountain goats at the trailhead, and I bemusedly skimmed it before heading on up the very steep and well maintained and graded trail--this is obviously a very popular hike. Those bright blue skies went away as the trail hit the bottoms of the clouds, then it was misty and foggy for the rest of the ascent. At 4800' the forest opened up, it got breezy, and the trail turned pretty much to stairs, with lots of hillside wildflowers that were strangely not that photogenic--just thistles and goldenrod and larged leaved plants with white splaying flowers, damp with dew from the mist.

I got to the top of a particularly curiously gravelly staircase and came around a tree... and a mountain goat hopped onto the trail about 30 feet in front of me and stopped and stared at me. Uh, that's odd. I'll just be quiet and not stare back, so I glanced down and occasionally looked up, as I got my camera out and tilted the viewscreen up so I could take secretive pictures. 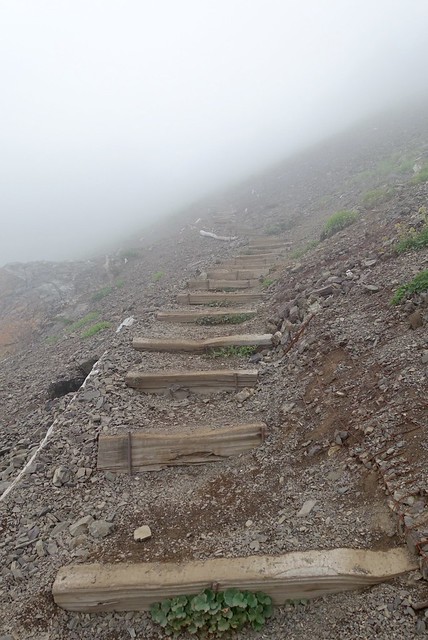 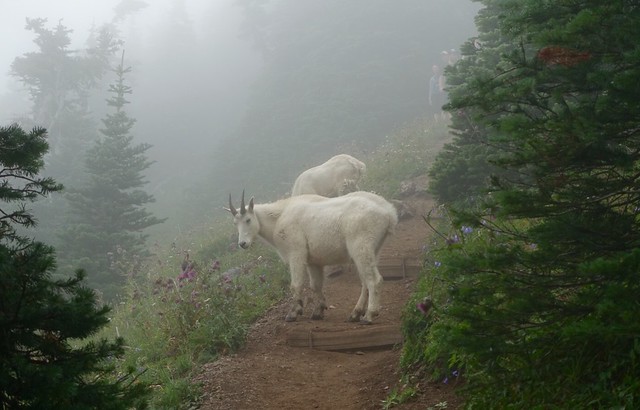 Then another goat and a little baby kid climbed onto the trail tread. Cute! Time for a video! I watched them for a couple of minutes, then the goats started walking down the trail towards me, pausing to nibble plants along the side, but getting closer and closer. Now what? Do I walk slowly backwards? Do I tell them to go away, softly? Do I yell? I backed away a bit, and the goats decided about 10 feet from me to scramble through some trees to make a half-circle around me to get back on the trail to delight the next hikers below me. That was an odd and curious encounter! 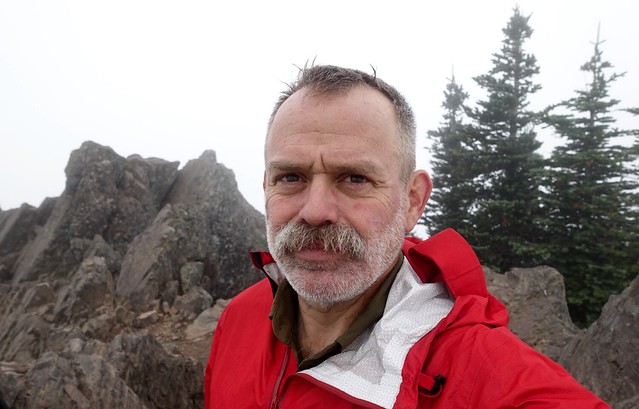 Anyways, up on top it was just as misty and foggy, but with some wind. I didn't linger and headed back on down to the car. Nothing really much to report, except that you really shouldn't hike that trail in Chaco sandals like those girls were. I drove on down and decided I really needed to find a place early to have time to do the final backpack repack and some laundry before heading out tomorrow--this break from the PCT has been six days now, and my gear has migrated around my pack in unexpected ways.

Tomorrow Eric will be meeting up with me at the rental car dropoff place at Pike and Boren in Seattle, then breakfast, then up to the pass... and the trail. It should be a short day tomorrow, just around 10 miles to the first campsite, and should I feel ambitious there are a few other campsites 6 to 8 miles further. Weather should be good too, it's warming up and might actually be very warm later this week, even at elevation. We'll see if that really happens, but it has already been a weird weather year so I wouldn't be surprised if the 90 degree weather turns into snow next week; seems like anything can happen. 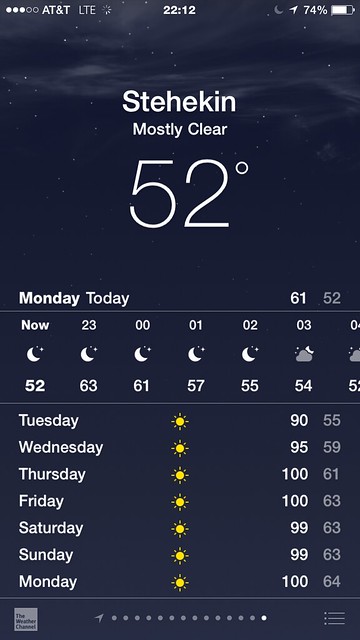 Stehekin forecast from July 27 on

< Across the Siskiyous, Day 2 Into the Alpine Lakes Wilderness >