Well, camping on the lawn at the Alderbrook Manor near their hiker hut sounds great, but with six other tents in close proximity it's Not So Great--it's pretty much guaranteed that one of the other six hikers will be a snorer, which was indeed the case. I really wanted to find my earplugs but never woke up to the point where I could be bothered to figure out where I put the bag they're inside. Earplugs should be on every PCT hiker's gear list--after the noisy night at the Acton KOA, I went out and bought some.

A bit of leftover pasta was my breakfast, yum, and orange drink and an apple, and I was good to go with the other four hikers for our 7:30 ride up to the trail. It was a bright sunshiny day, not a cloud in the sky, and I pushed off at 8:15 or so, wondering what the trail would feel like hiking solo, and if I'd make any buddies with the other four hikers in the truck.

Answer was... no. One hiker was heading southbound, two of the hikers were already buddies and I overheard them talking about their typical 25 to 30 mile days, and the other hiker was having problems with her feet and wasn't sure how far she'd go. Ah well, I'll set out on my own.

The trail for the first ten miles was your typical "ridgewalk on the PCT" trail: mostly gentle grades as the trail went up and down, cruising from saddle to gap to saddle and contouring around the high points. It was fast, and after stopping to get a liter of water below Shelley Lake, I continued on to a shady rock overlooking the Scott Valley, where Etna sits.

After lunch the trail changed a bit, and suddenly the wildlife came out. In quick succession I had a hummingbird check me out for a few seconds while I walked along (rather odd, like it was some drone or something), then I nearly stepped on a gopher snake, which startled both me and the snake. Whew, it wasn't a rattler, yay... that rattler was 10 minuter further down the trail, and I wasn't expecting it or even looking for snakes at all. It was laying straight across the trail; I got within about a foot of it before it angrily started rattling then quickly ducked under a trailside manzanita bush, and kept going. Too fast to get a picture, but I did notice that distinct diamondback pattern. I'm wondering if I remembered that correctly though--do rattlesnakes, big 4 foot ones, live at 6300 feet in the Marble Mountains?

I was watching very carefully for snakes from then on out, but the real scenery came from a number of new wildflowers: pink monkeyflowers, an odd pink flower with a snail shape, deep purple-blue gentians, and maybe a new type of lily. Really pretty. 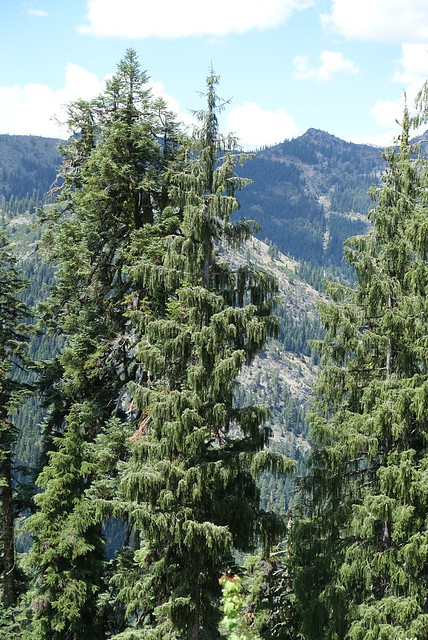 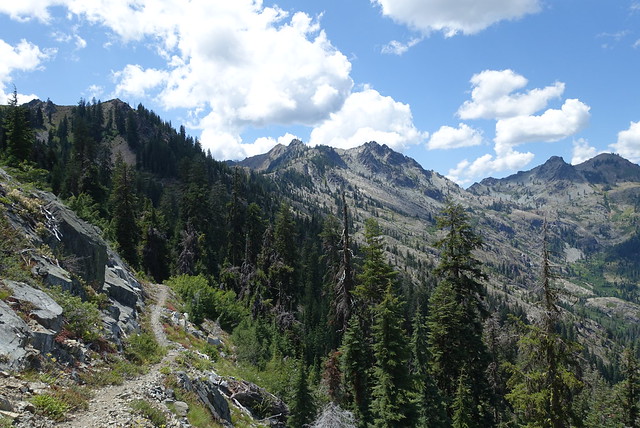 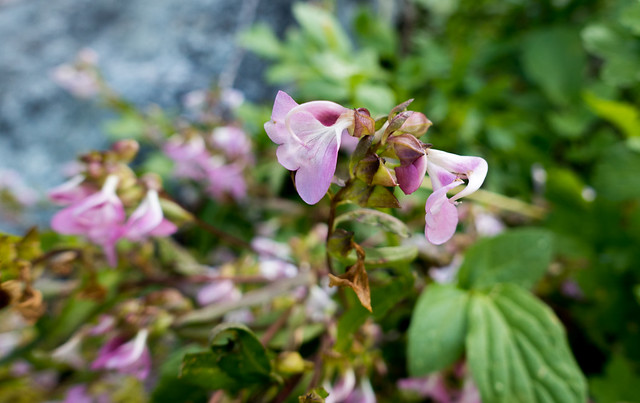 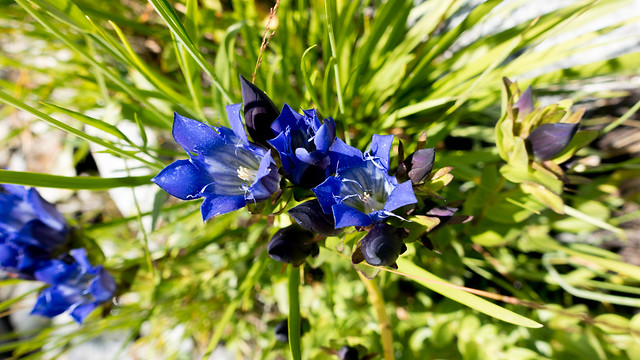 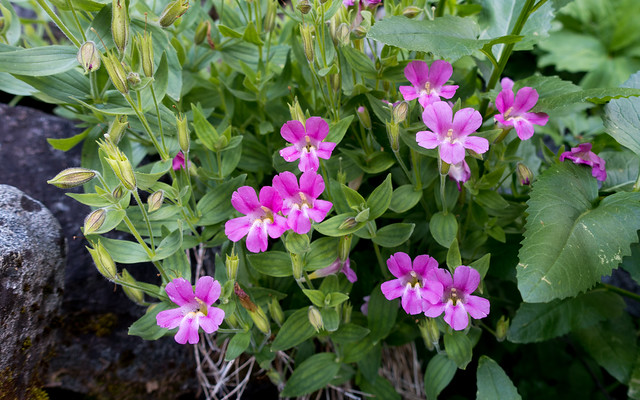 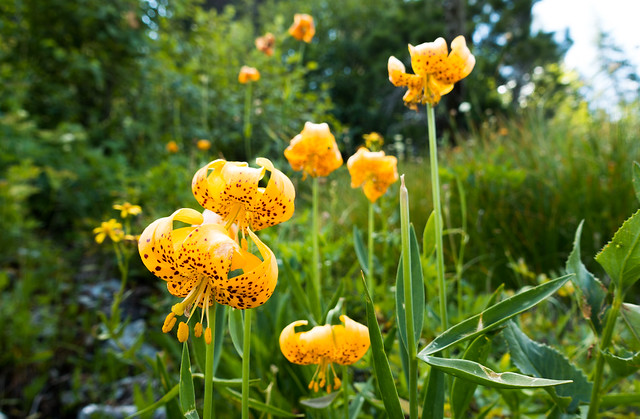 The trail tread, though, had become much more rocky as it transitioned to granite yet again, and my pace slowed. The views were outstanding, both east and west, so I didn't mind at all. 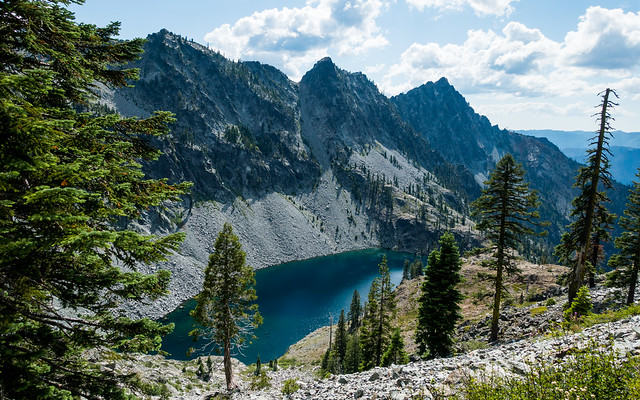 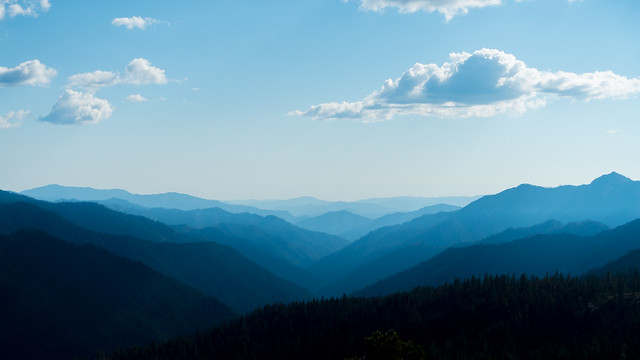 Blue Ridges to the west

I was debating for a long part of the day on how many miles to do today and tomorrow. Seiad Valley is just 57 trail miles from Etna Summit, which makes 3 evenly spaced days of 19 miles each... but the campsites aren't that evenly spaced. I figured I'd camp near the cabin, 24 miles in, then split the remainder of the 33? I didn't know, but I did notice this little alternative loop trail about a mile and half long to Shadow Lake, right around 21 miles. Hmmm... I decided to do it. Hopefully there won't be any snorers there either. 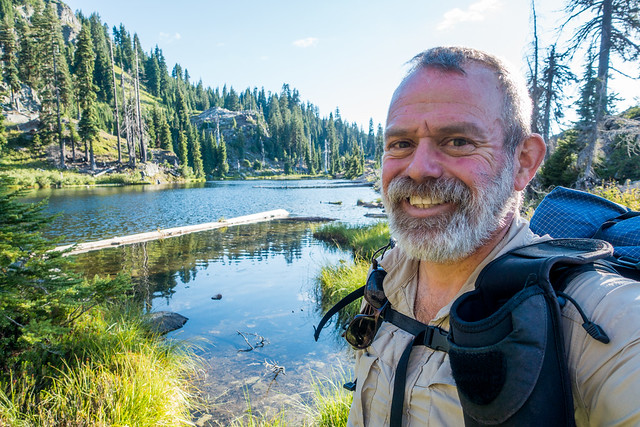 That was a great decision: Shadow Lake is a small, warm, clear lake perched on a shelf high above a valley, wonderfully scenic. 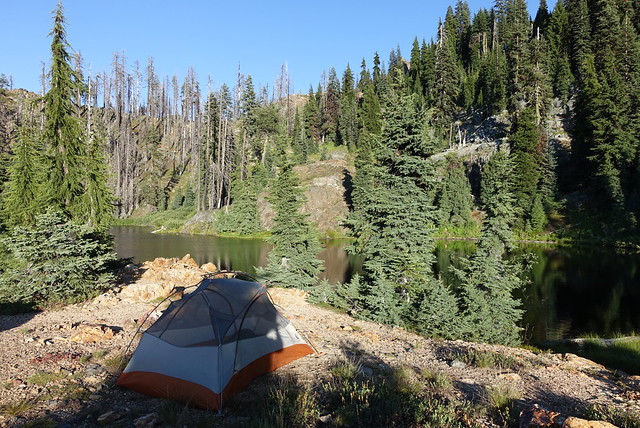 I went swimming, I made dinner while I dried off in the warm setting sun, I enjoyed the solitude. There was even a friendly salamander that swam up to check me out as I filtered water. There weren't even any mosquitos either! It was a great campsite. 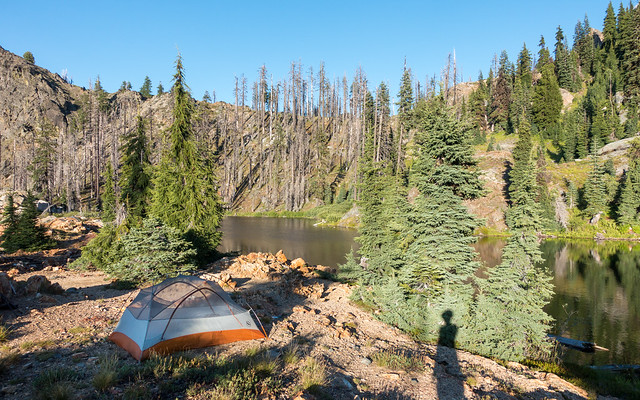 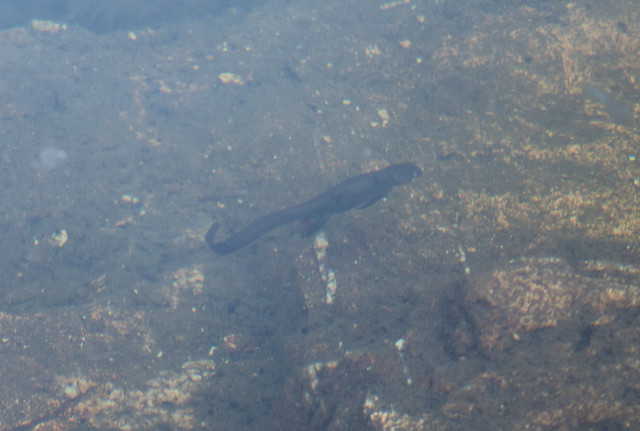 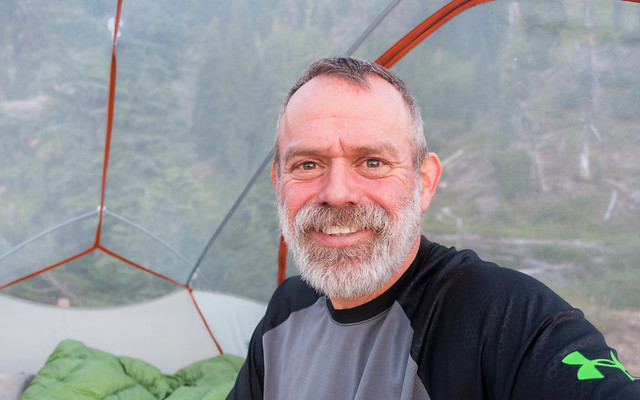 Tomorrow: more of the same. Don't want to get too far ahead; the last 6.5 miles to Seiad Valley are a hot road walk, and there's a 4000 foot drop through a burnt area with a fair bit of erosion. I'd like to do both the burn-walk and the road-walk in the early early morning, and make it to Seiad Valley before the restaurant closes at 2pm. We'll see how it all plays out.