dan.marmot.net
< To Below Muir Pass Up and over easy Selden Pass >

In the brief minutes it took me to fall asleep last night, I suddenly felt better. I'm just trying to hard to make buddies and get connected and walk at their pace and camp where they camp. I'm not hiking my own hike.

Or, to say it differently: "Waaa! It's my fourth day back at summer camp and no one wants to sit with me at meals! I want to go home!" Yep, it's just homesickness, and Chris and I will go on great adventures once I'm done with the PCT, and that time certainly isn't now.

I did tell the others that I was going to get up at 4am and head up and over Muir Pass before the snow gets too soft. I got up at 4:20, after finally recognizing my cell phone's alarm over the roar of the river below my tent (iPhone had reset the alarm tone in an unsuccessful attempt to get it working again). I had already packed my stuff sacks, so it was just a matter of taking down the tents. The moon had set, but it was pretty light out as I left camp at 5:30. The others I were hiking with were all over on their white Tyvek, cowboy camping, and still prone on the ground. I hope that worked for them--I don't like cowboy camping, with bugs and ants, and I'm pretty blind without my glasses or contacts, so sleeping under the stars doesn't do much for me. Not that there were many stars, it's nearly a full moon, which would also wake me up (I do often sleep with my eyes half closed, don't know why but little lights or a big full moon would sure annoy me).

I had camped at mile 835 (WACS835C in Halfmile lingo), and had three miles to go up to the top. The first mile was normal, typical, just steps and water bars to step over as the trail wound its way up above treeline. The first snow I came across was at the lake a mile up (mile 836), but it was just four inches if that, half-covering the rocks and low plants. 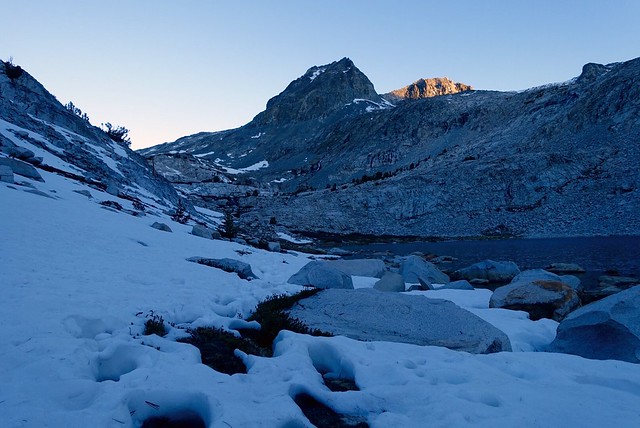 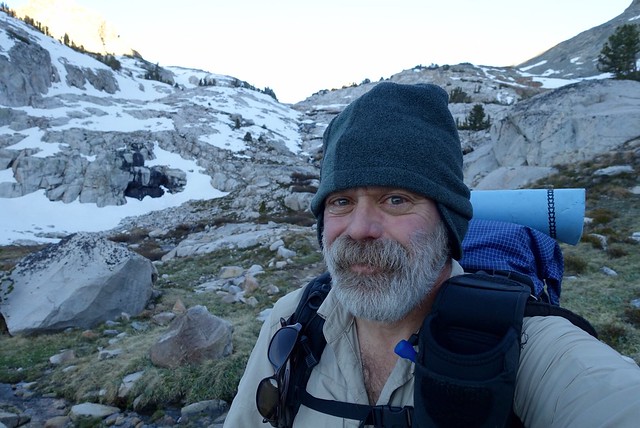 From there on up it was a mix of snow fields and rocky slopes, with the trail covered for long, half mile or more stretches. 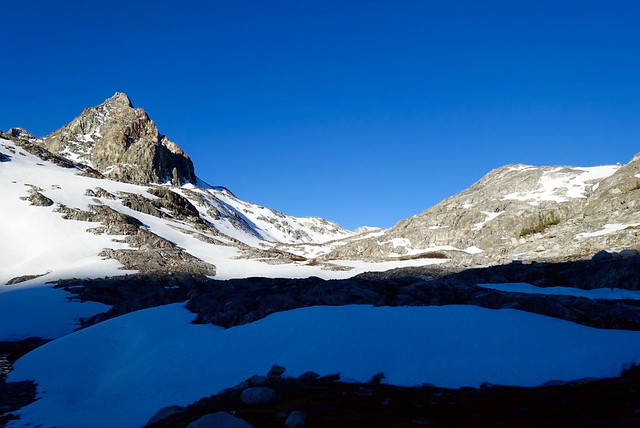 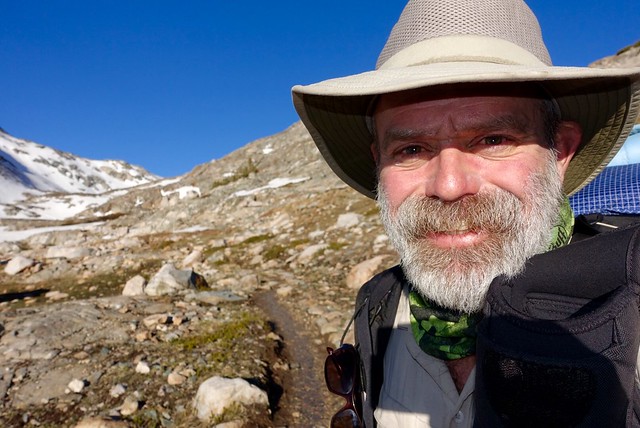 You really did need a map or GPS... or you could pick among half dozen other snow steps from previous hikers. I just followed along on the hard snow: the slopes were gentle, and the snow had a pleasant crunch to it for traction. I didn't even think of putting on my microspikes, and I made it to the top around 8:00. 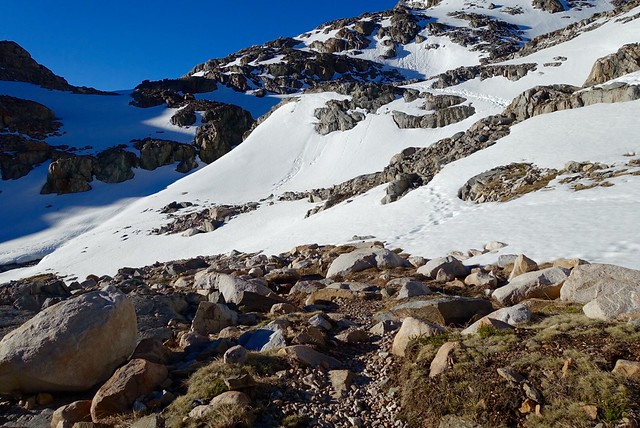 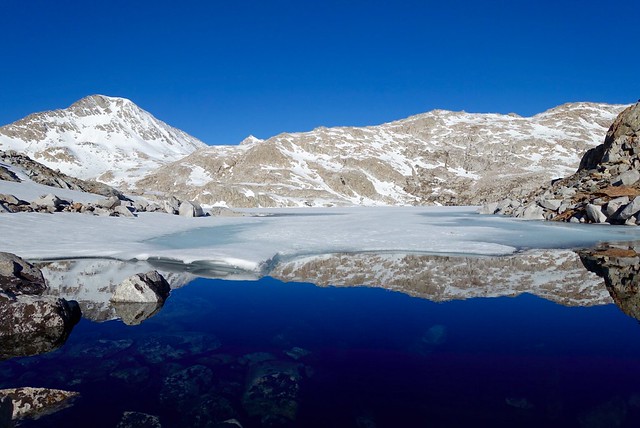 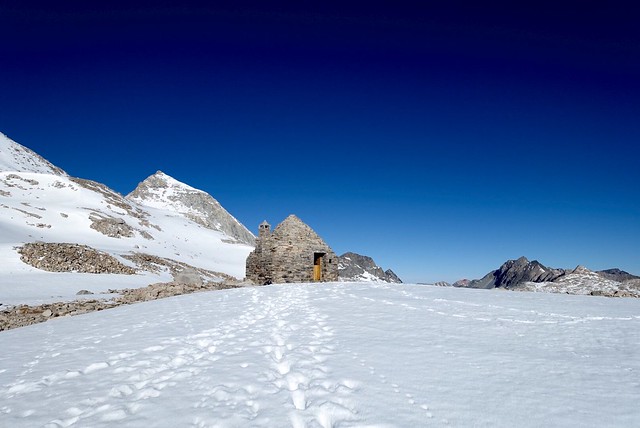 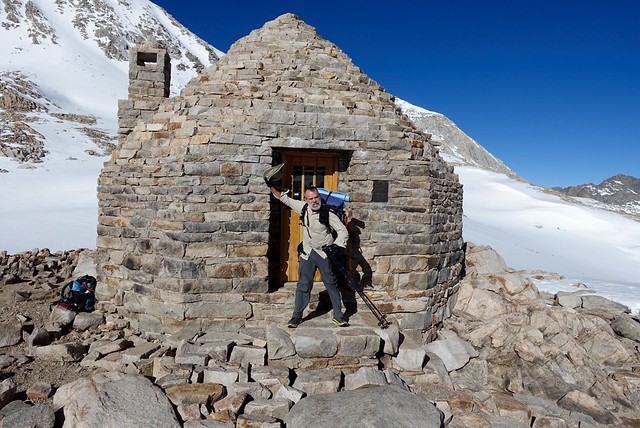 At the top, another hiker came up from behind me, and said hello. She was part of the crew that camped at mile 835, and she was on a challenge to be the first to the top of the pass. She made it, yay, and then waited for the rest of her crew. I hadn't seen anyone when I looked back, who knows where they were--I said goodbye. I'm hiking my own hike today, and I want to get through the two miles of snowfields on the northwest side of Muir Pass before I start postholing. 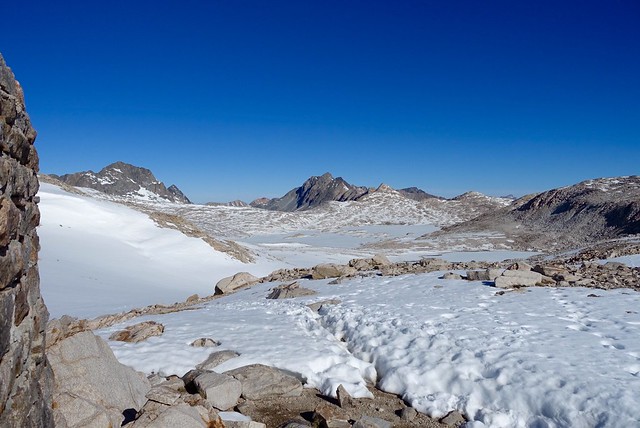 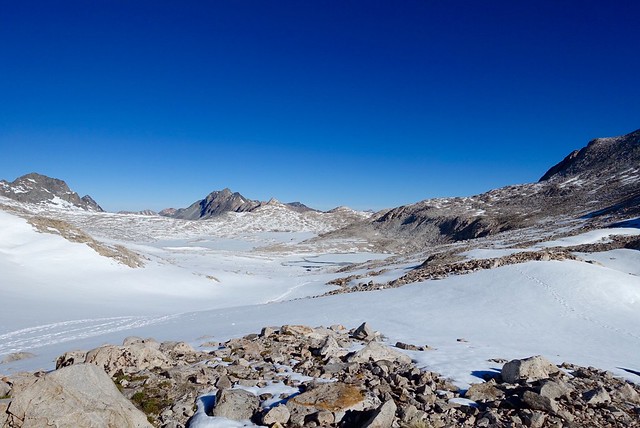 That was a fun descent. I tried glissading, but the snow was too crunchy--very strange, I couldn't get any speed, it was almost like trying to slide down a slope of sandpaper. So I walked, which was fine, the snow was hard. I felt sorry for some of the other hikers that obvoiusly came over in the afternoon, with their knee and sometimes waist deep postholes. I didn't have much problems, and only postholed maybe ten times, none deeper than my knee and most just ankle deep. 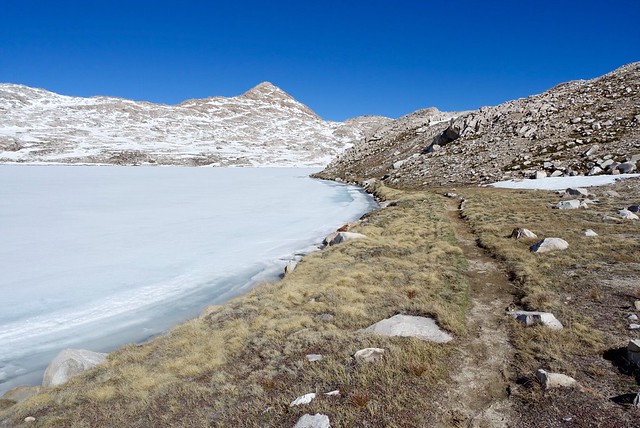 Down to Sapphire Lake, m840 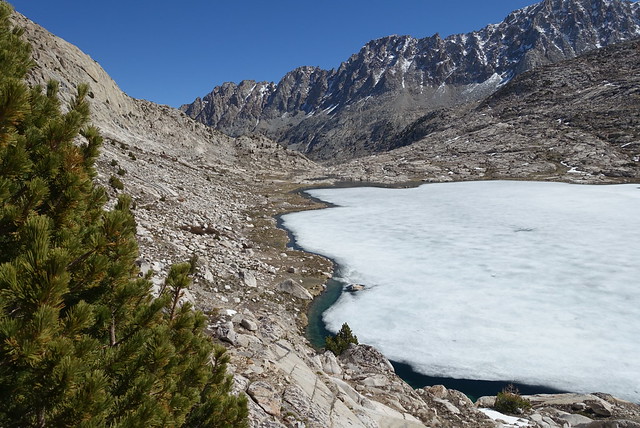 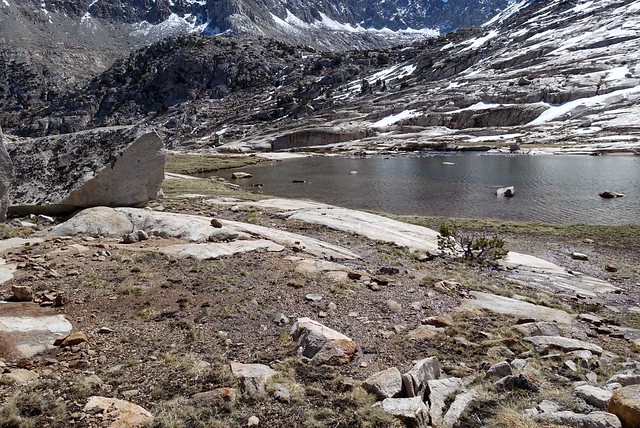 I was enjoying this immensely: I was out on my own, on my own schedule, not worried about whether or not I'd meet up with this hiker or that hiker for lunch, or who I'd camp with. There's a lot of other PCT hikers around, and I'm sure in a week or three I'll find some little group that'll be fun to travel with. I need to relax and take it easy. It's all good, and good things will happen. 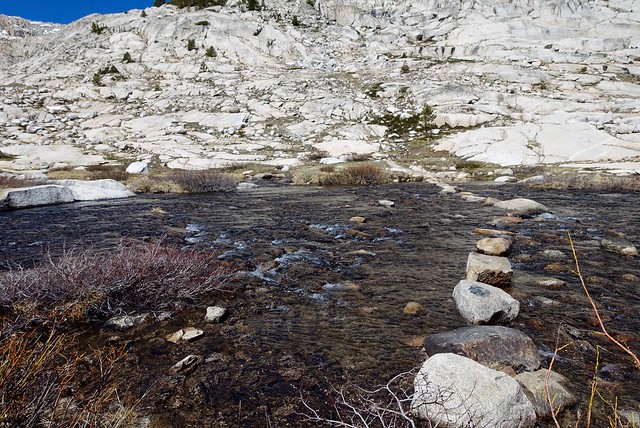 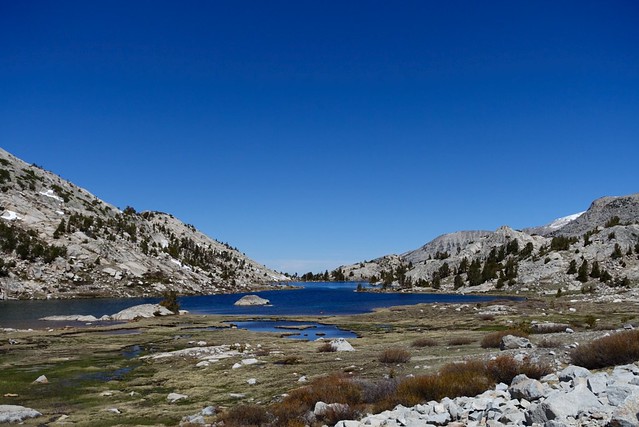 The PCT descended into Evolution Valley, which was wonderful, and really fast hiking along level packed dirt paths (and warm but not-quite hot, it was 72 degrees or so). 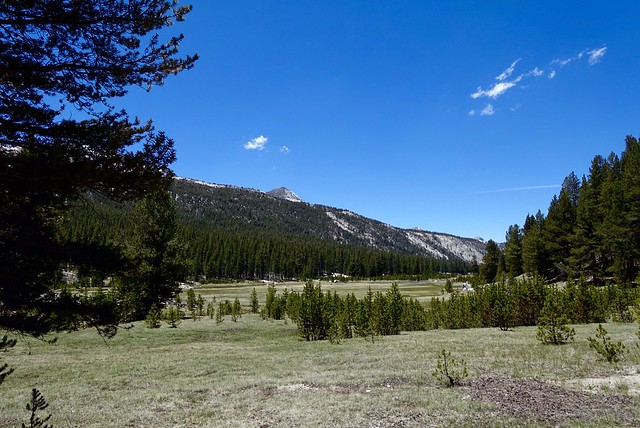 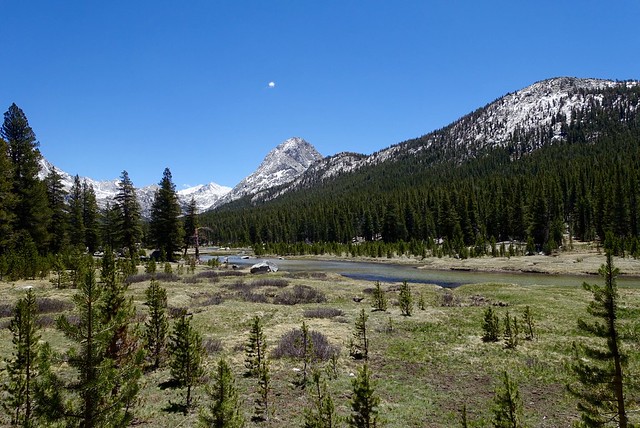 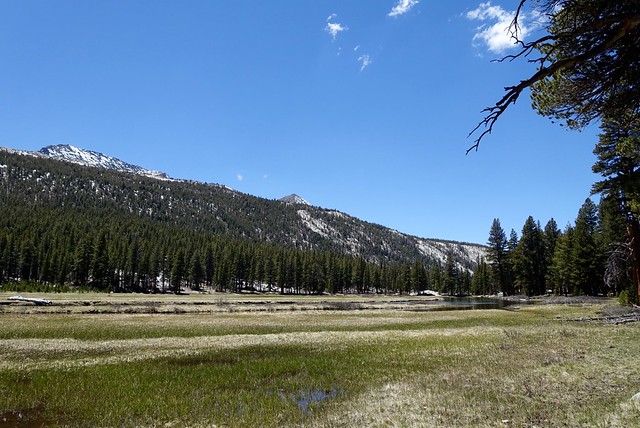 It's so beautiful there, and I thought it'd be great to camp there, but it was only 2pm and with six hours of daylight left I felt I could go a lot farther. So I said my goodbyes, forded the creek (an easy 12 inch wade) and dropped down to one of the forks of the San Joaquin river. 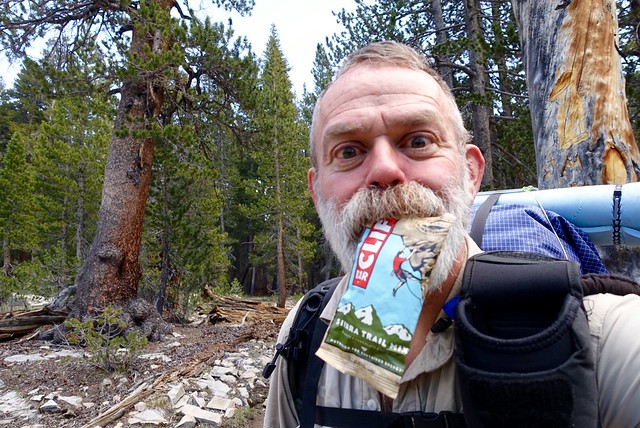 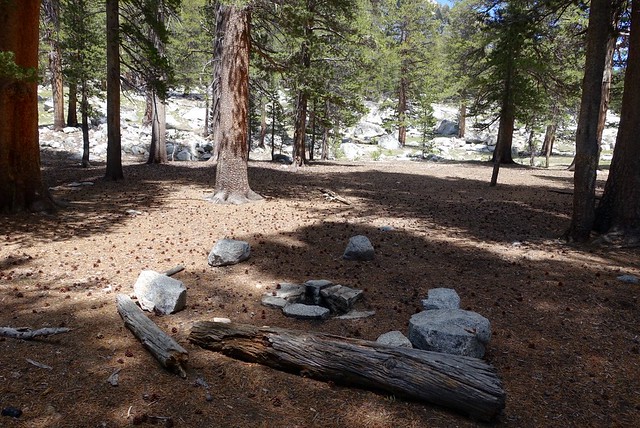 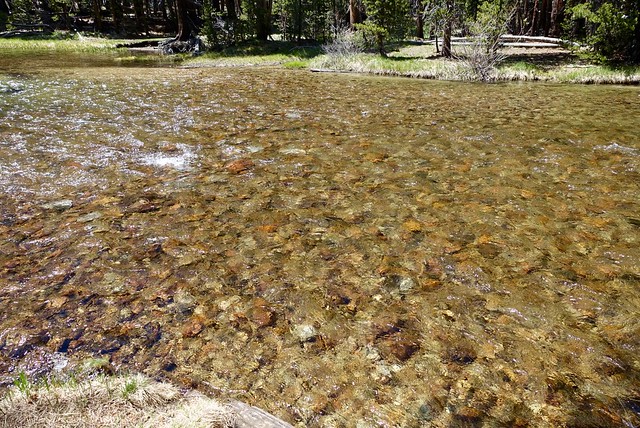 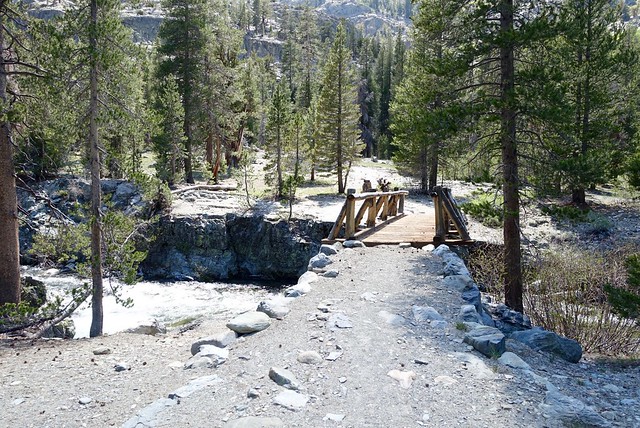 That was a short but hot descent, ugh. 78 degrees, hot sun, dark rocks reflecting the day's heat. But at the bottom, and across the river bridge, the trail followed a side branchlet of the river. Time for a dip! Brrr, that was cold, but I'm now clean and not-quite-so-smelly. 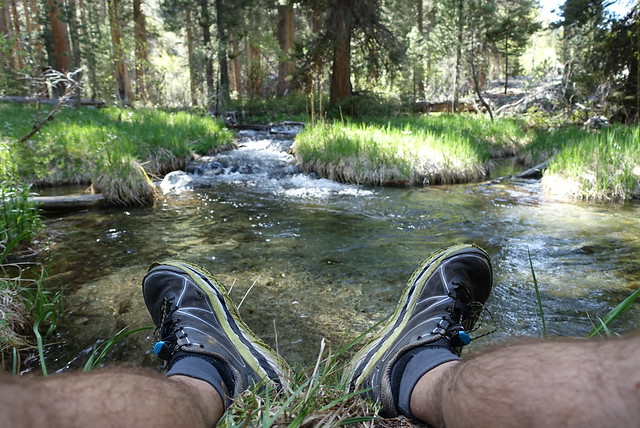 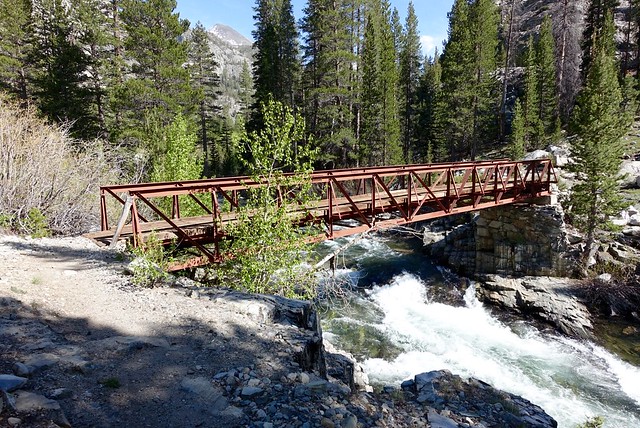 As the trail followed the river, I decided to camp at the Piaute Creek bridge. It's a couple of miles before the long ascent to Selden Pass (via Sally Keyes Lake), but I realized that I could actually do things like rinse out my shirt and socks, and with 2 1/2 hours of daylight left they might even mostly dry. 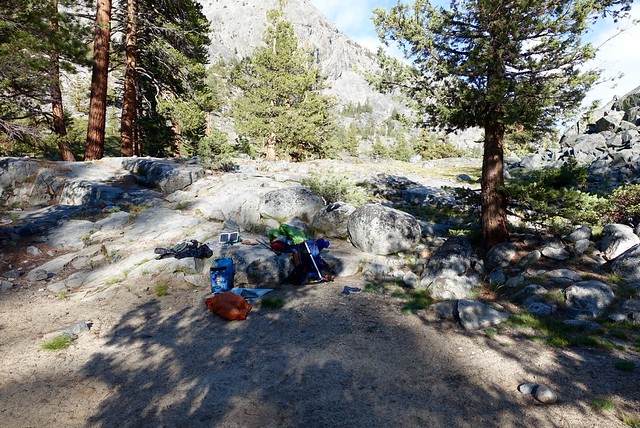 Tomorrow morning I'll wake early again, before sunrise, use the flat fast first 2 miles as a warm up, take off my jacket, then head on up the hill. Selden Pass is lower then the others, under 11,000', and I'm expecting a bit of snow on the north side but not much to slow me down.

Some planning thoughts: I'm also finding myself a bit ahead of schedule by not-quite one day. I think I'll exit for Mammoth at Reds Meadow, rather than Horseshoe Lake, and hitch to and from town. I'm at mile 856 now, Reds Meadow is at mile 907, fifty trail miles away. There are two passes (moderate Selden and easy Silver), neither of which are like the five big passes I've been over. The last 15 miles are downhill. So maybe 18/18/14 miles, getting into to Reds in three days, sometime in the afternoon. That's a good enough plan to work with.

< To Below Muir Pass Up and over easy Selden Pass >