dan.marmot.net
< Over Muir Pass to Piaute Creek Towards Tuolumne Meadows >

Ahhh. I slept in. The plan for the next two days is to just get to Mammoth, 50 trail miles away, or 2 1/2 days. There isn't a big pass today, just Selden Pass, which might have a big snowfield on the north side or might not have much at all.

Sleeping in and taking it easy was the right choice, after yesterday's 22 mile hike over Muir Pass I was tired and slept 9 hours straight. From my camp at Piaute Creek, it's another six miles and 3000 feet elevation to the top of the pass, so I'm not going to get there early enough to enjoy that nice crunchy-yet-firm snow I've had over the last four passes. Ah well, though I did think that starting at 7:30 is weirdly late after starting well before 6 the previous two days.

From my camp at Piaute Creek, the PCT/JMT followed the river, fast and pretty flat, before ascending steadily up to Sally Keyes Lakes just below the pass. It was a "get it done" sort of trail... though I did come across a mother grouse in the middle of the trail, sheparding her two very small chicks and clucking and keeping a very wary eye on me. It was cute, and I got close enough to get some pictures without disturbing them. 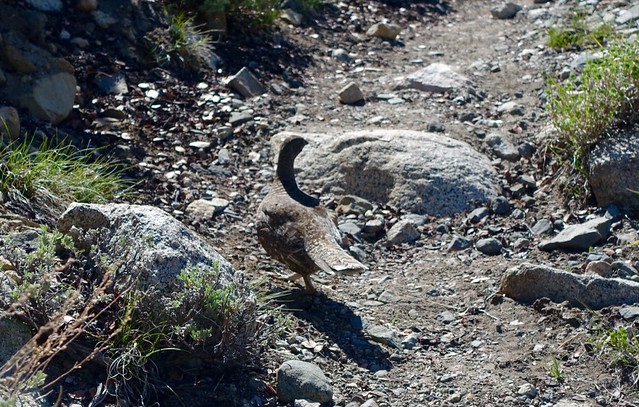 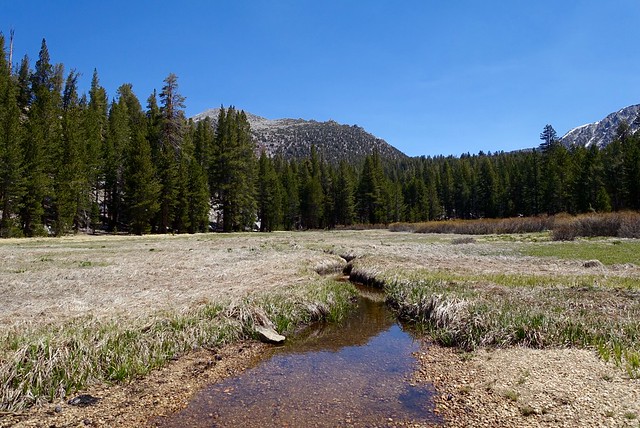 Meadow on the way up to Sally Keyes Lakes 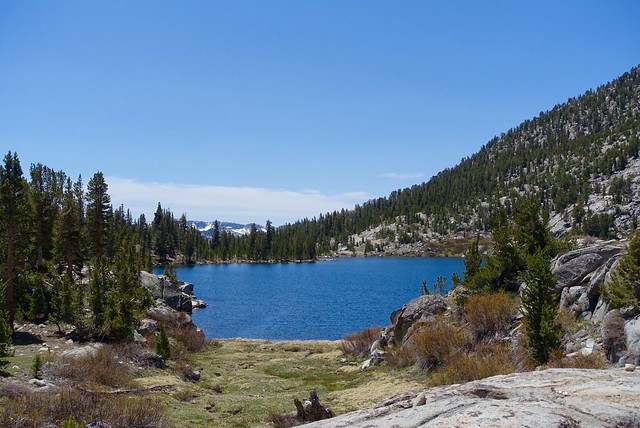 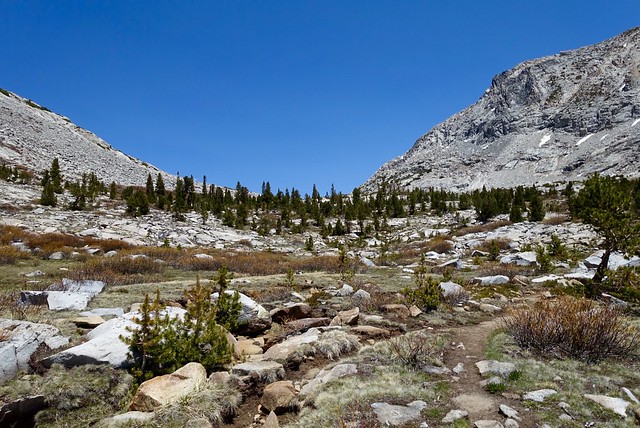 Looking up towards Selden Pass 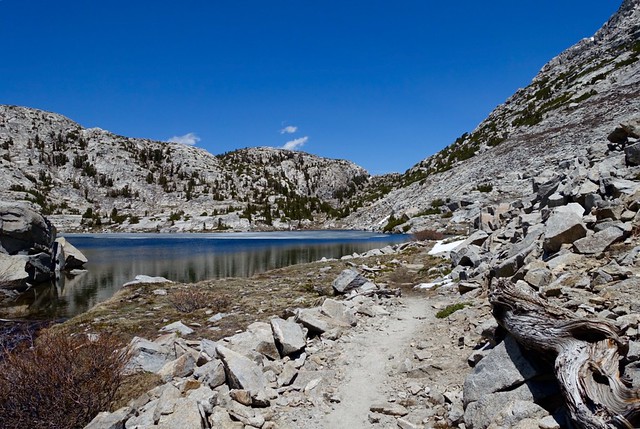 I hiked a bit with Squatch and Caboose, who I met heading up the hill, and chatted with Caboose about plants. We all stopped to filter water at the outlet of the Sally Keyes Lakes, and were all amazed at the dozens of rainbow trout swimming around, just feet away from us. Too bad none of us were fishermen; these were foot-long creatures... and then we headed up to Selden Pass, and a wonderful view north over half-frozen Marie Lake, dotted with little granite islands and shrubs. 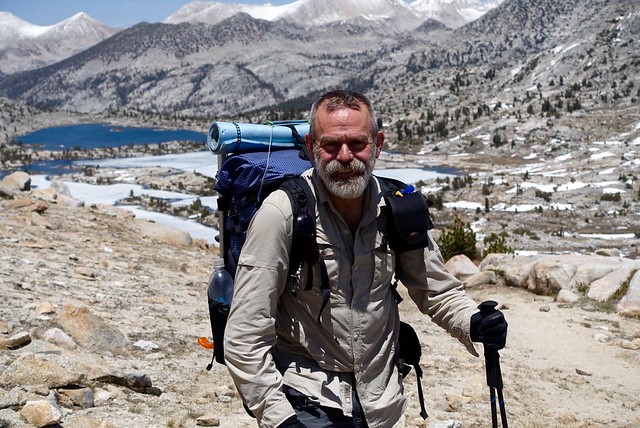 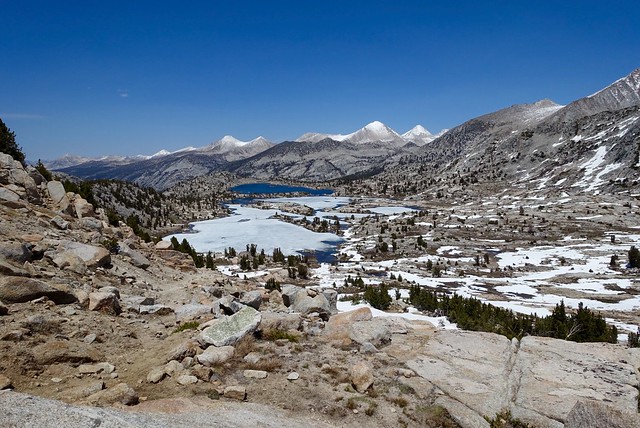 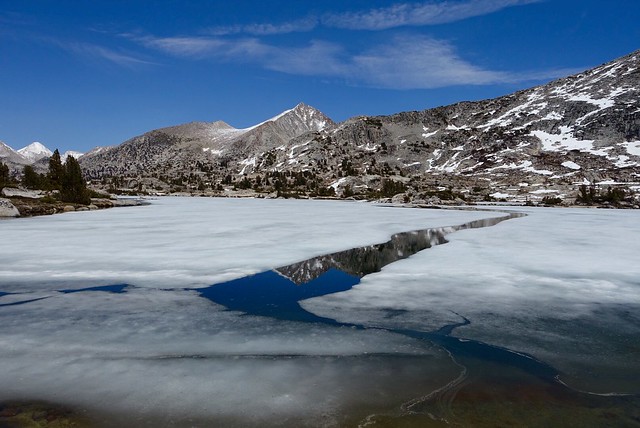 The descent down was easy--there was maybe 300 feet of snow to get through, and it was so soft you'd sink all the way through to the ground a foot or so below. I just followed footsteps, and wondered how far I'd get. There's one more pass before Mammoth, Silver Pass, and it's far enough away that I'll have to go over it midday. I don't know what the conditions are like, but I expect it'll be a bit of a slog, like wading through a Slurpee. 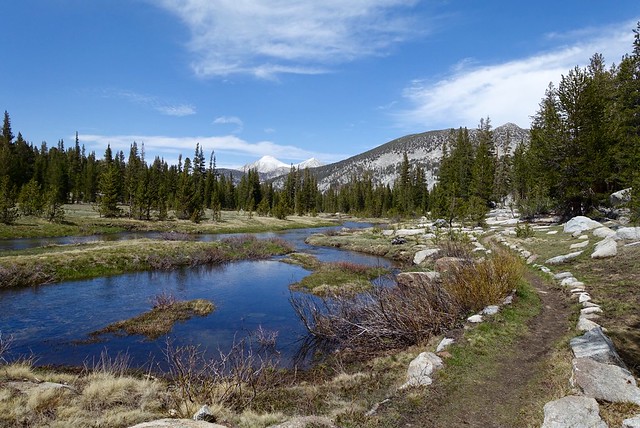 I decided to just go as far as I could, the trail was easy and downhill, though there were some creek fords. Bear Creek was the most difficult, water was just above my knees, and I had to recall some decades-old training: face upstream, and don't cross directly across but walk upstream at a 30 degree angle or so... so you can fight the current. The current was indeed pretty strong, but I kept my footing, and my trekking poles definitely helped.

My shoes and socks and pants were soaked, so after a bit I changed out of them, just in time for another snowmelt-fed overflowing crossing... and there goes a second pair of dry socks, sigh. I just kept the wet socks on for the next three miles. They eventually sort of dried out.

Around mile 872, though, I ran into a problem: suddenly the PCT was all swampy, and icky, lots of bootprints. What's up with that? This is the first time that's happened. Looking at the map, doh, I had accidentally taken the Bear Creek trail, and was a good 1/4 mile down it. I cut crosscountry to rejoin the PCT, sigh. Getting tired, better camp for the night.

But first, my phone went 'bing", telling me I have a text message. What? There's no cell service here! Uh, there is. I checked in with Chris, and then tried to get my iPhone apps working again. Aha, that weird 'crash on launch' issue I've had with all the non-stock iPhone apps is just because I need to log in with my AppleID, it's probably been more than ten days or something. That's a relief.

At the end of the day, I ran into Squatch and Caboose again. They're heading down the Bear Ridge trail in the morning to VVR, then will zero and take the ferry back. They did say they were pretty much out of food, so I gave them a couple surplus Clif bars of mine, and half my granola (what was I thinking?)

Now I have to figure out when to start tomorrow. Take it easy? Sure. I've got 34 miles to go, a little bump and a big pass tomorrow, then the last 15 miles is downhill to Red Meadow where I can hitch to Mammoth. So maybe a shorter day tomorrow, then a 20 miler the next. Need to see if anyone knows the conditions on Silver Pass, then sleeeeeep. 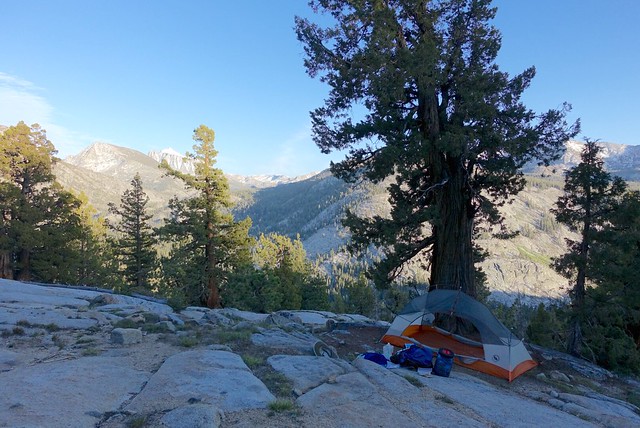 < Over Muir Pass to Piaute Creek Towards Tuolumne Meadows >