dan.marmot.net
< To Below Mather Pass Over Muir Pass to Piaute Creek > 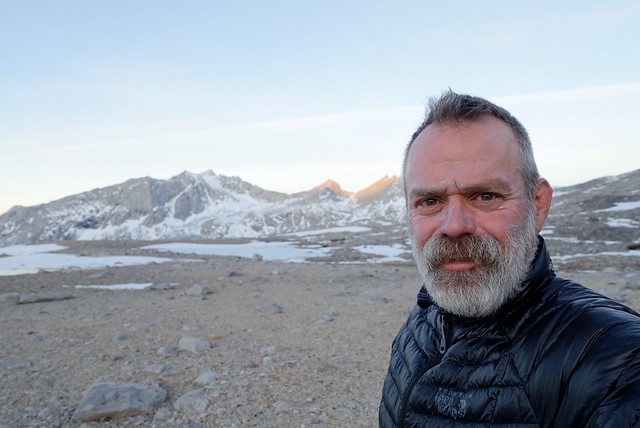 Last night the two women I was hiking with played a little challenge game with each other--"betcha can't get on the trail at 4:30!" Well, they lost their self-challenge, and told me they were heading out an hour before sunrise. I said "have fun!" and decided that was just too early for me.

But at 4:30, there was a large BOOOOM echoing off the basin walls, and the distant sound of boulders crashing down. At first I thought it was an avalanche, then realized it was probably snowmelt freezing and prying open some cliff--a rockfall. That really woke me up, so I said "Ok, time to go up and over Mather Pass". Peeping out my tent door, I could see the headlamps of the two women climbing up the face to the pass. I'd be an hour or so behind them. 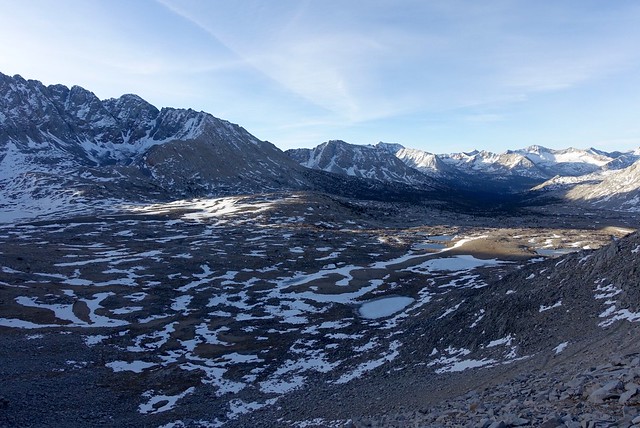 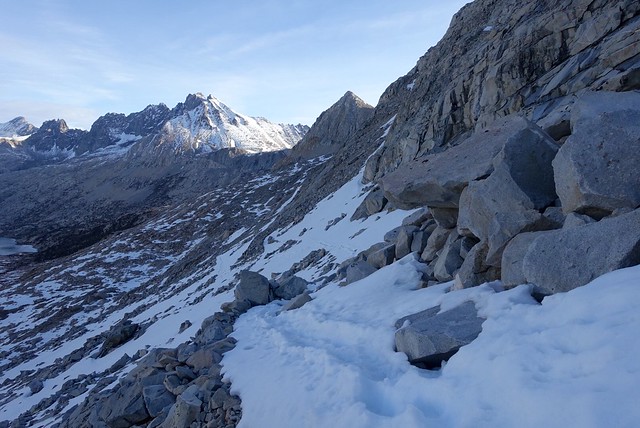 Mather was not hard. Again, it was fully clear on the south side (which really is south-east), and maybe 400 feet of snow on the north. 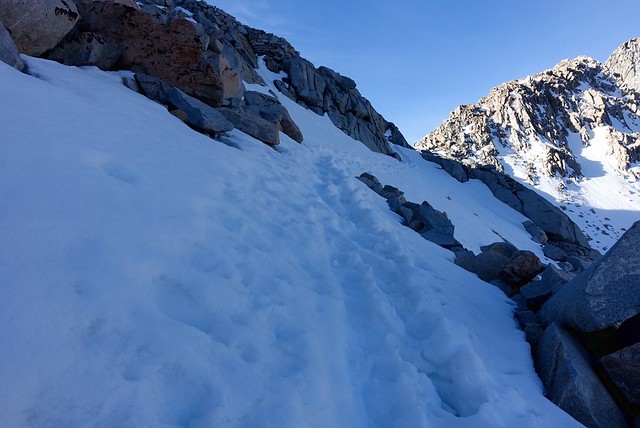 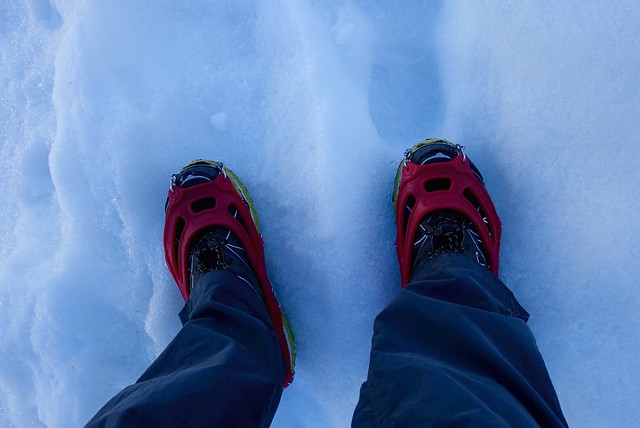 My Hokas with microspikes. m817 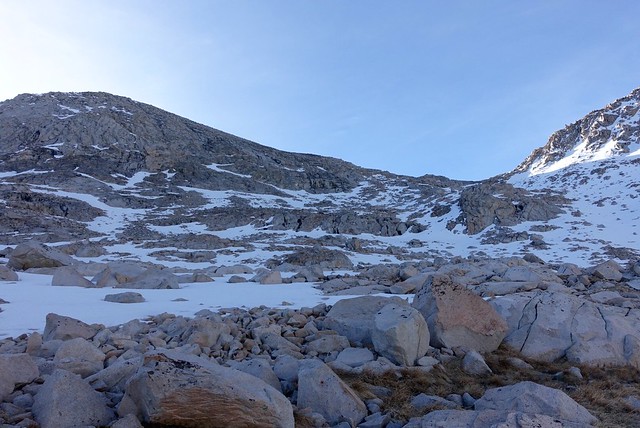 Looking back to north (west) side of Mather Pass, m817 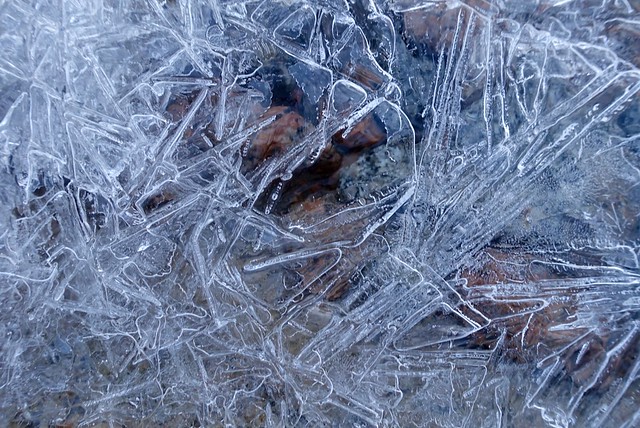 The trail then descended for many miles to the middle fork of the San Joaquin River, past pretty lakes. The forest became a bit different too--aspen groves were thicker, more flowers, more vegetation. I don't ever recall seeing many aspens in the Sierra, but along this section of Palisade Creek there were many. 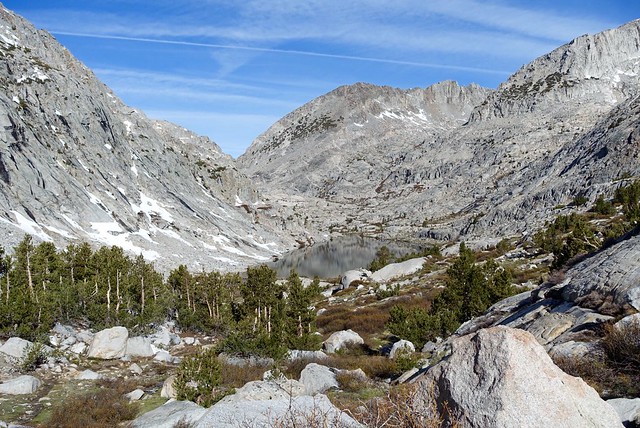 Down into Palisades Valley, m818 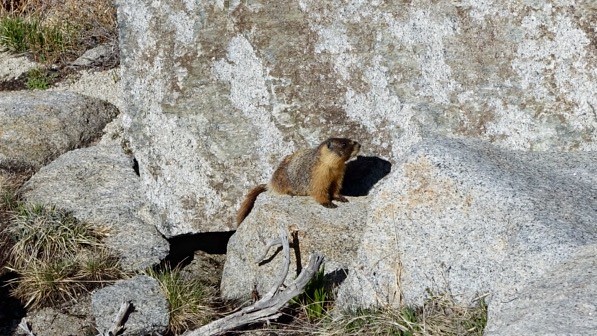 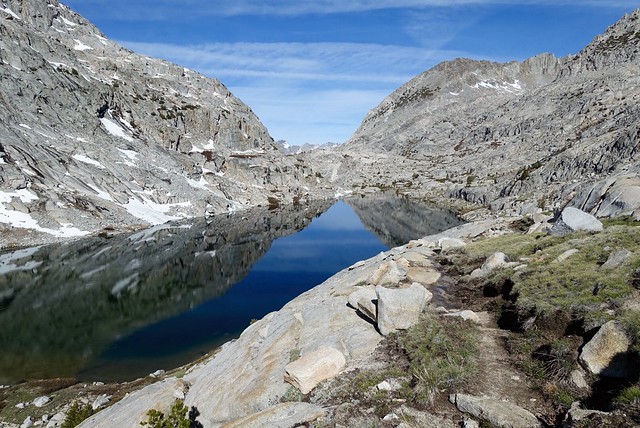 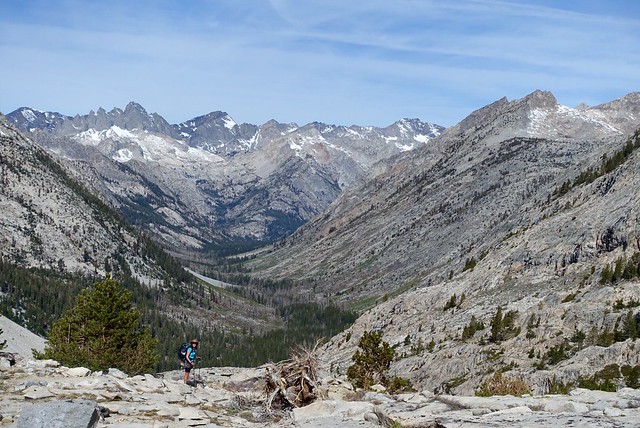 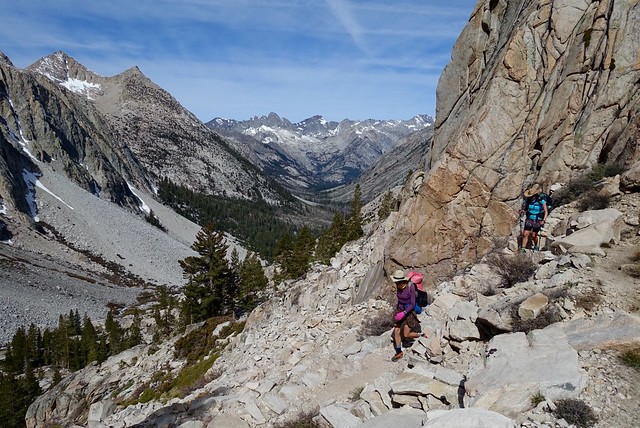 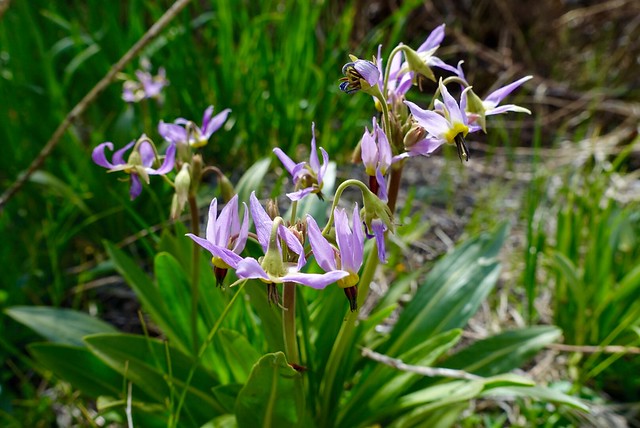 There was wildlife too--I startled an alligator lizard that had just caught a butterfly, saw many more marmots, and spotted some new wildflowers. It was pretty great. 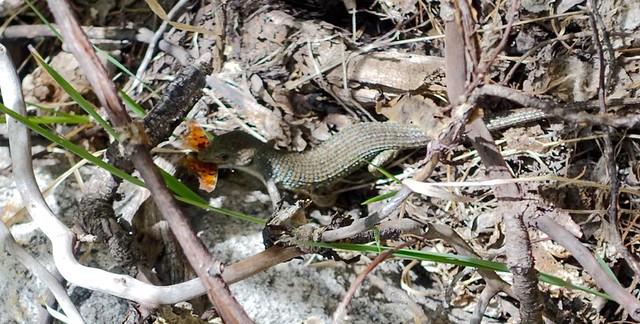 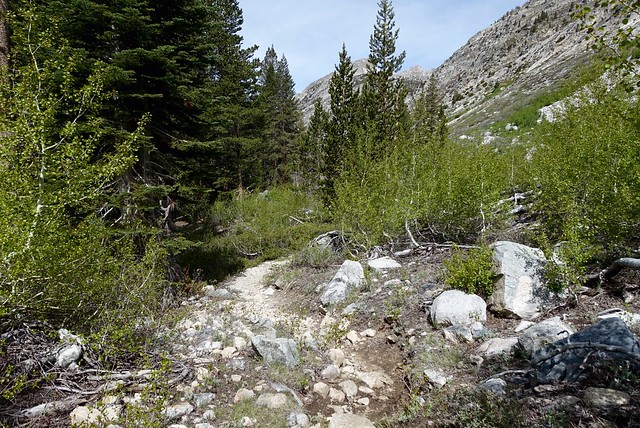 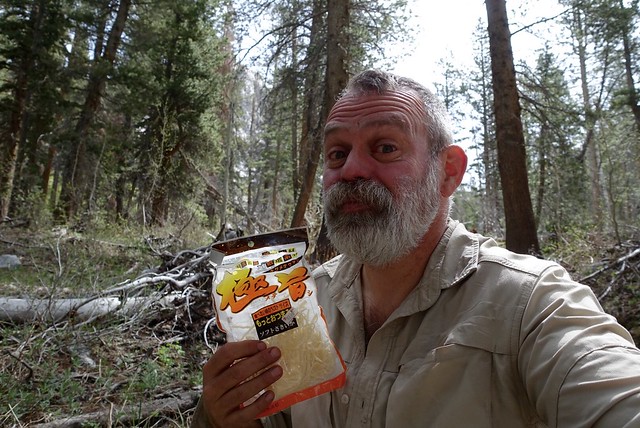 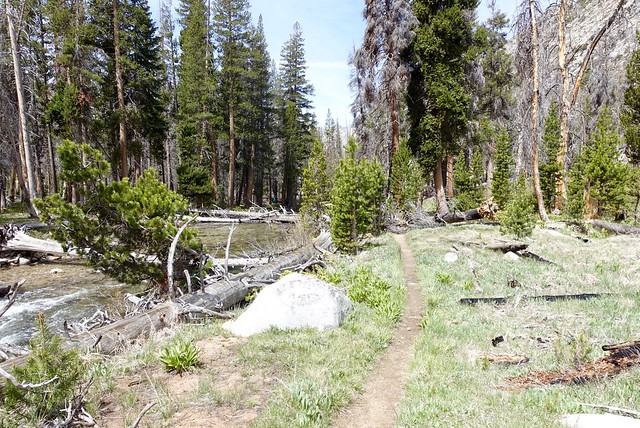 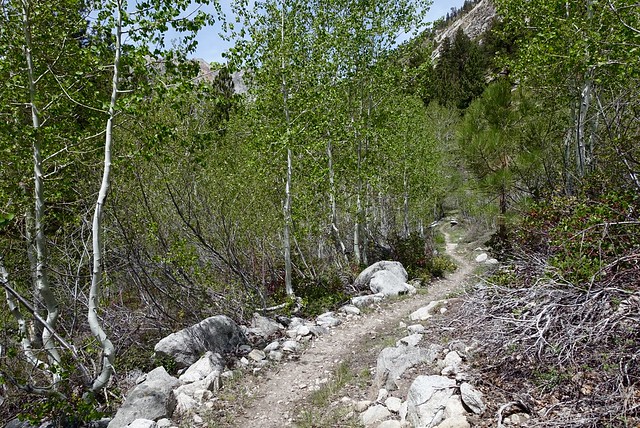 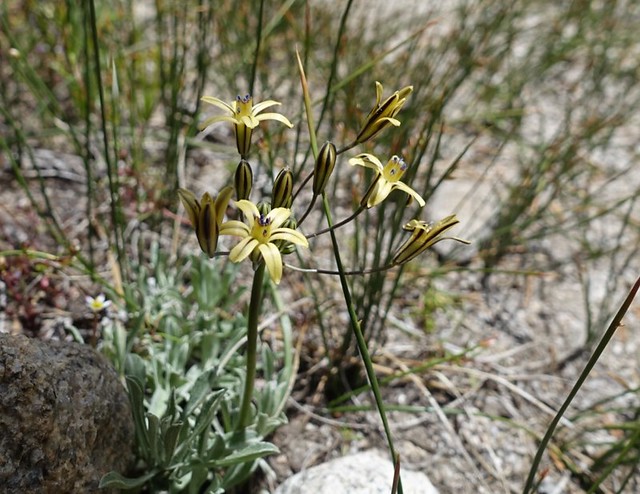 But it was also getting hot, and when the trail turned uphill it was 80 degrees out, strangely warm. I stopped at one shady rock to rest for a bit, and had to move after a minute--the rock had been in the sun all morning, and was more a hot seat than a cool place for a break. That's not quite what I expected after going through a half mile of snow earlier in the morning! 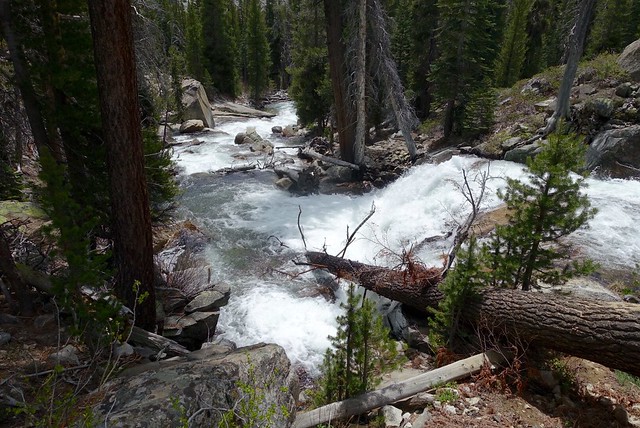 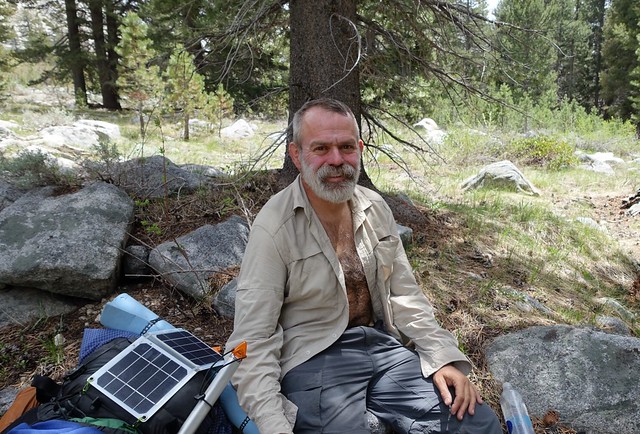 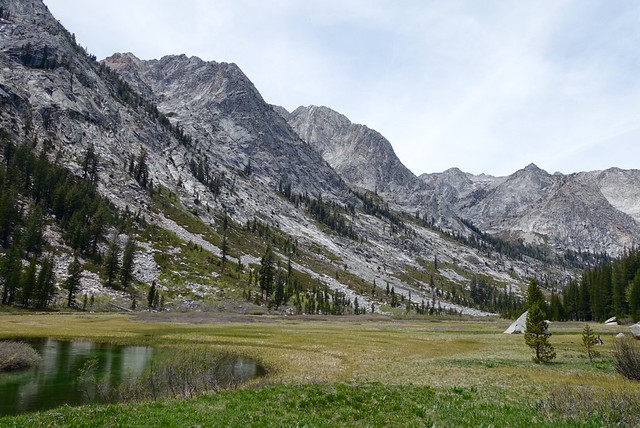 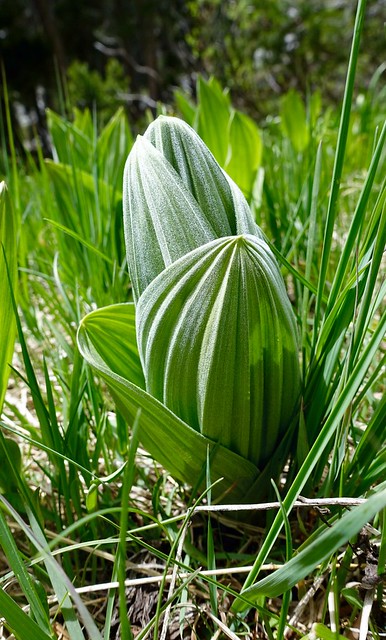 The PCT headed up and up, and eventually I passed the junction with Dusy Basin and the exit out Bishop Pass. 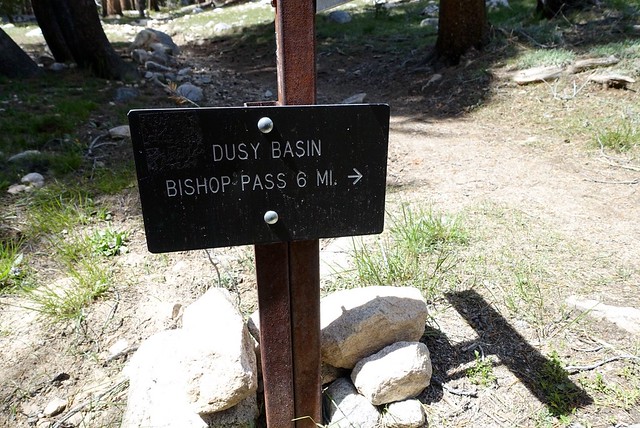 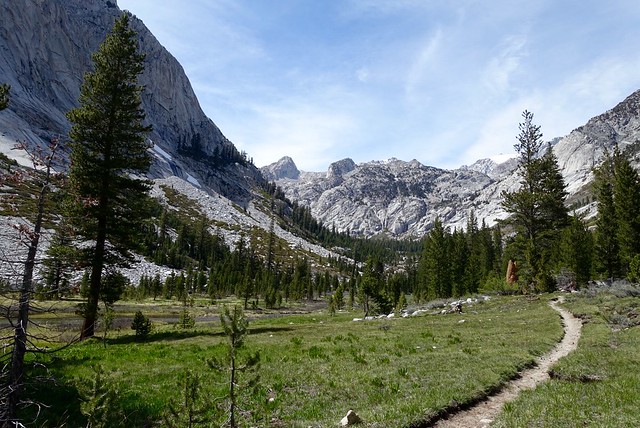 At this point, I'd been on this trail before, back in 1979, though I didn't remember much at all. I did take some pictures on my crappy 110 camera (which are also on Flickr), and did want to take before/after pics, which would be fun. I found the spot where I took a snapshot overlooking Lower Pete Meadow; that was fun to revisit. 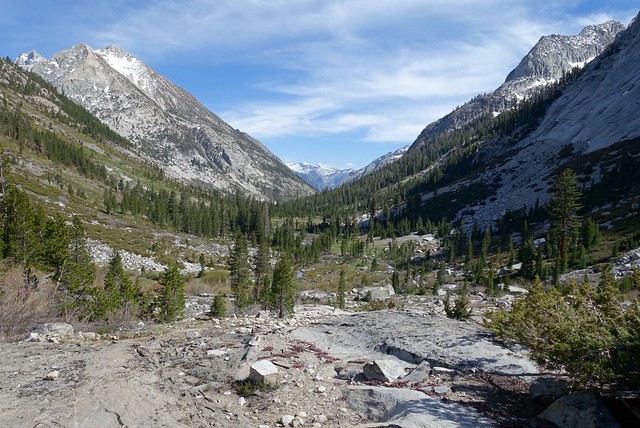 From there, though, the trail kept on going up and up, and I wanted to get to the very last campsite marked on Halfmile's maps before Muir Pass, at mile 835. I remember going over Muir Pass in 1979, it was cold and high with a few miles of snowfields before and after the pass, it's not like the other previous passes which have steep short approaches and departures.

The heat and the steady uphill and some speed demon PCT hikers breezing by me those last miles really soured my mood. Ugh. I started to get really depressed; it's been four days where I get all weird in the afternoon, will this ever stop? 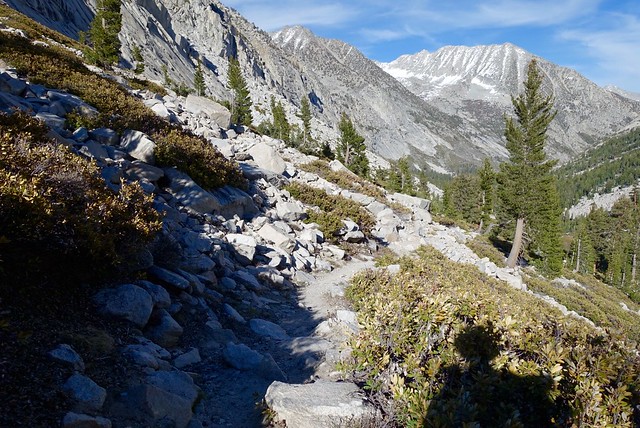 It's strange, while I really wanted some company in the first sections of the PCT, I'm finding that yes, there are other people around me... but they are all in little crews or in newly formed twosomes, and I'm not invited to the party. I feel isolated.

But most of all I know that I have an excellent companion at home, and he's not here to enjoy it together. That makes me very sad... I don't belong here by myself; Chris should be here too. There's more than a bit of homesickness mixed in as well, but this almost feels like grief.

Oddly, I also have been getting a feeling of deep accomplishment from this at the same time: I can hike 800 miles through the desert and mountains, I CAN do this, and I can make it all the way to Canada. But I've been having feelings that I've made my point as it were, and I've been distracted with thoughts of what I'll be doing at home after the PCT.

Tomorrow morning, before sunrise, I'll go up and over Muir Pass and walk through Evolution Valley--if there was ever a place to scatter my ashes, this would be the place. Evolution Valley is also a place I've been to before, back in August 1979, and it really has been a dream for decades to return. I'll be happy to complete the PCT by walking through there on my last days. I'm thinking now I might just exit at Florence Lake and head down to Fresno and figure out a way home.

Maybe things will be better in the morning, but each of the last four days has frankly been dark and lonely. Once again, time to just go to sleep, put these gloomy thoughts behind me hopefully (mornings are always cheerful!) and get on with things. 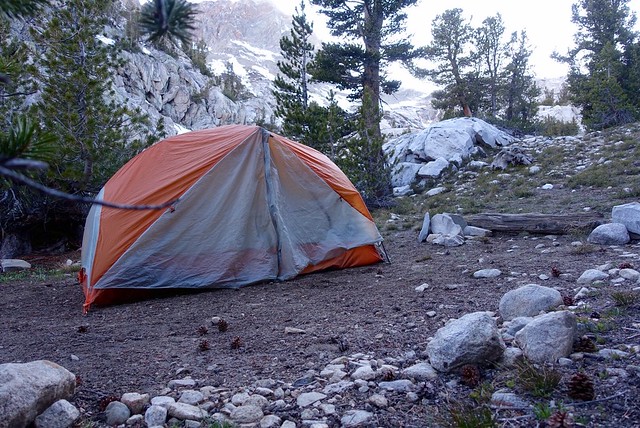 < To Below Mather Pass Over Muir Pass to Piaute Creek >