dan.marmot.net
< To Woods Creek below Pinchot Pass To Below Muir Pass >

Today was super-scenic. I slept really well, as did the other two hikers, and I started out around 7:30 before they were out of camp. It was good idea to tackle the uphill when I was refreshed, rather than struggle with it in the afternoon, and eventually they caught up a couple of miles below Pinchot Pass. 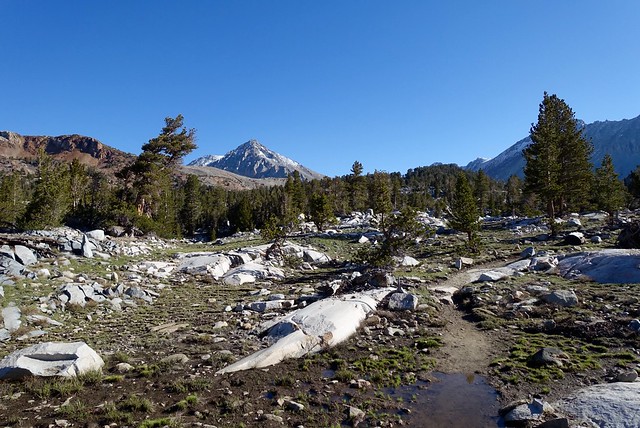 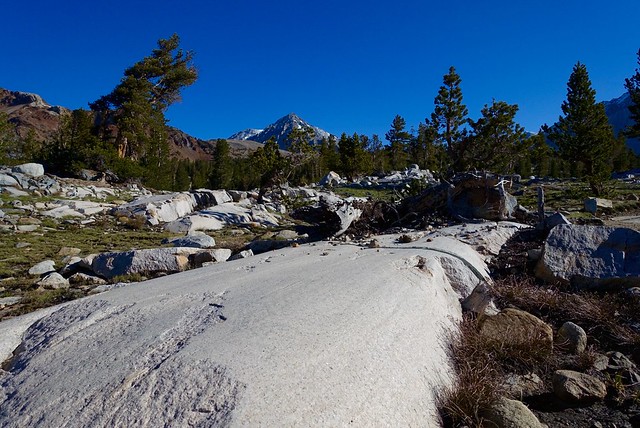 Pinchot Pass is funny. It's not difficult, the slopes are pretty gentle, but the trail is routed across a north facing slope a mile before the pass--why? When we got there at 10, it was soft and postholey, and it was a tedious half an hour to cross. There wasn't much snow--a foot or two--but it was dangerous because of the loose scree and boulders underneath. I postholed a few times and twisted my foot, getting it caught, and banged up my shin as well. I was also glad to have my GPS, so I could see where the trail was under the snow, and avoided the snow as much as I could. 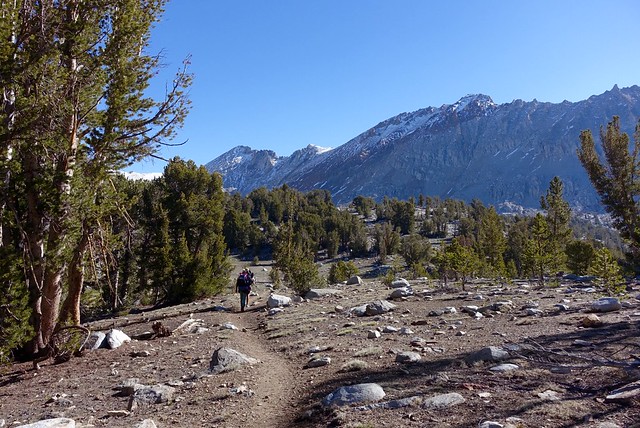 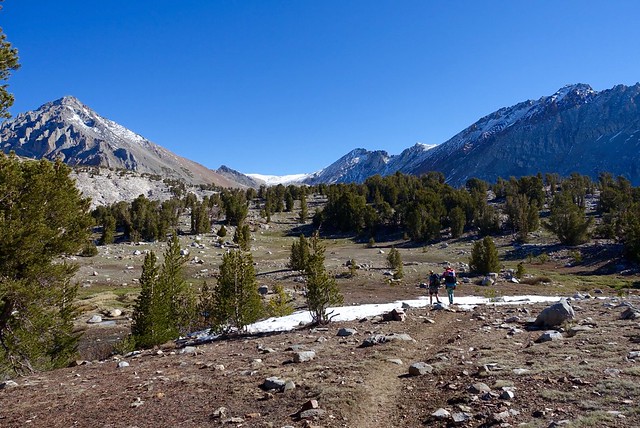 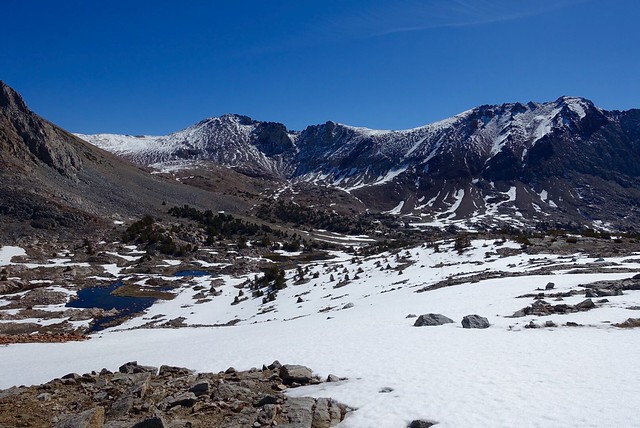 We ran into two friendly rangers who updated us about the next passes (and didn't ask for our permits, are we that obviously legit?), and then went up and over Pinchot Pass. There wasn't much snow at all on the final ascent up! 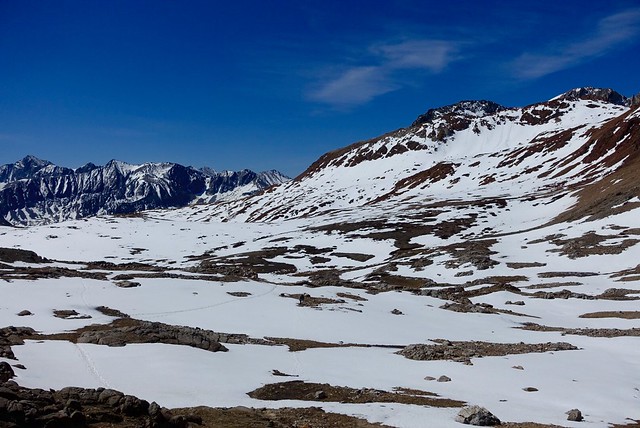 Looking back from the final climb to Pinchot Pass, m806 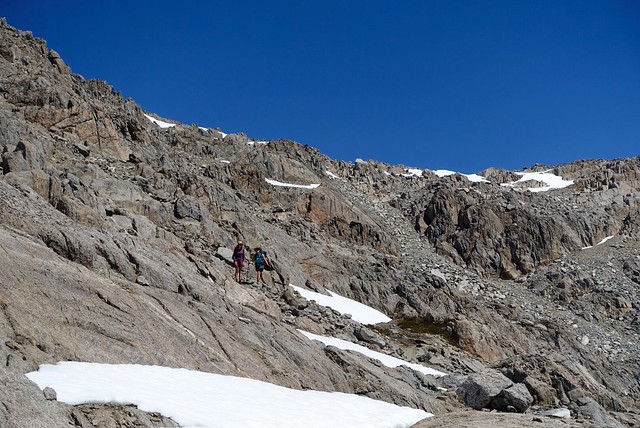 Pinchot Pass from the south, m806 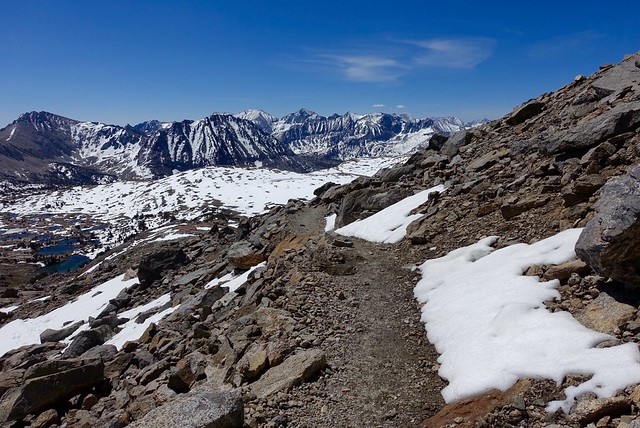 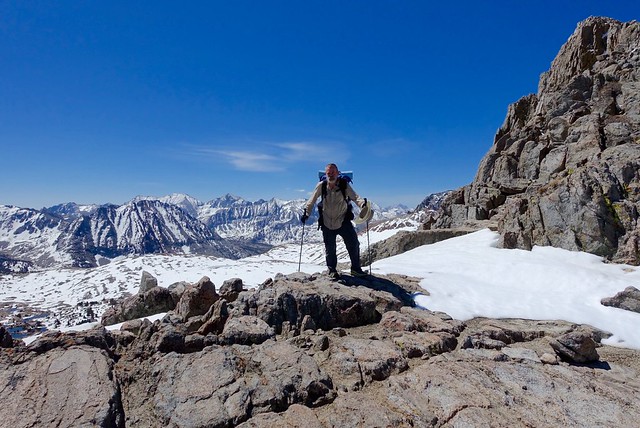 Once again, the scenery beyond the pass was great, a broad U-shaped valley dotted with lakes. 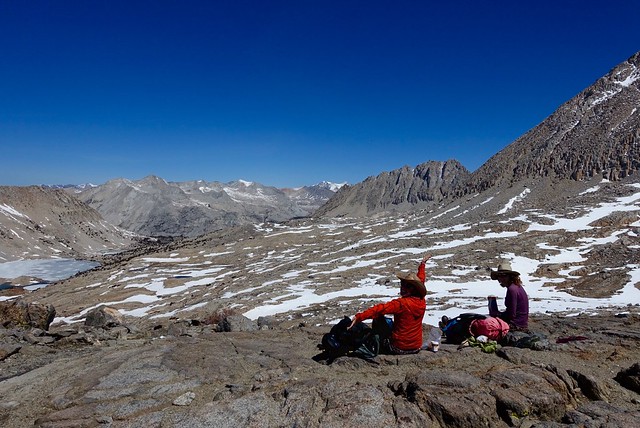 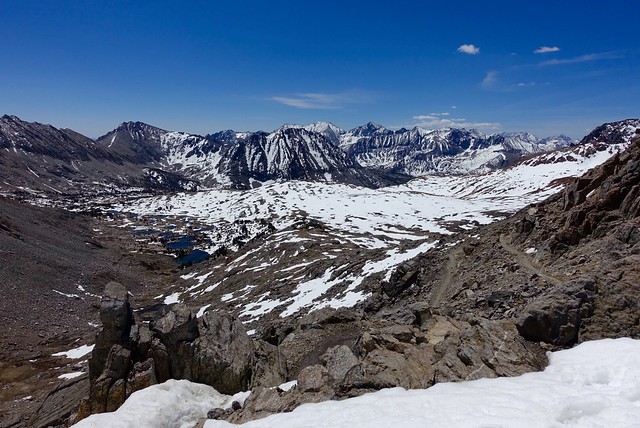 The descent was pretty easy, hopping from rock island to rock island, eventually getting out of the snow and onto a really fast section of trail, where I actually walked faster than a mile an hour. 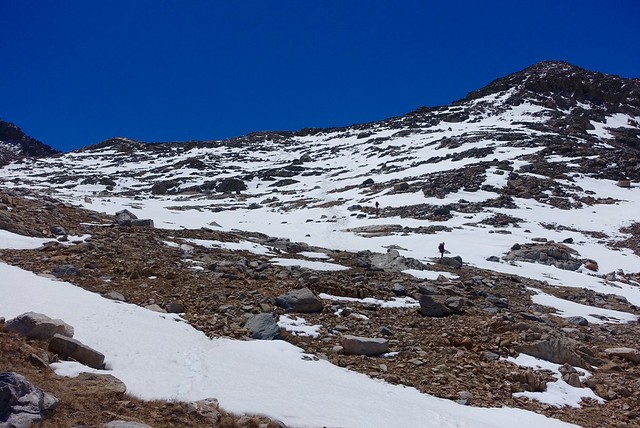 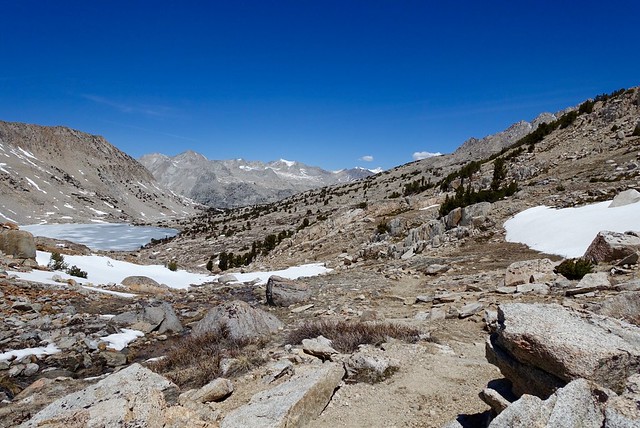 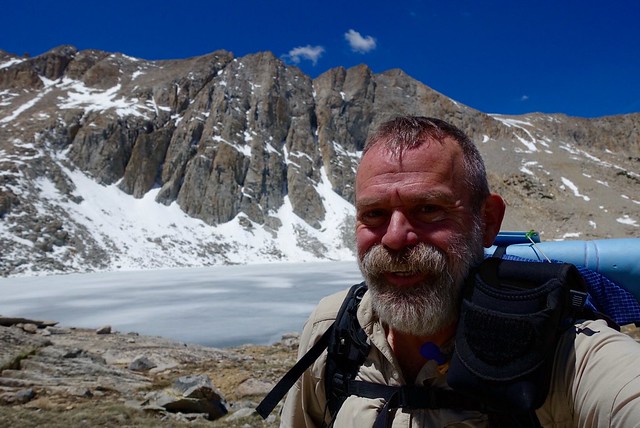 Bench Lake in its valley, m808 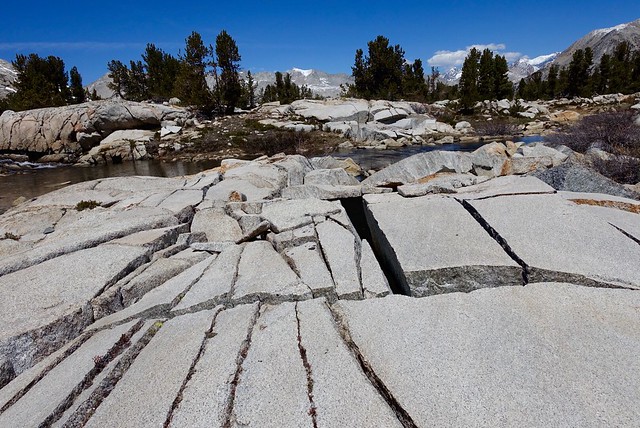 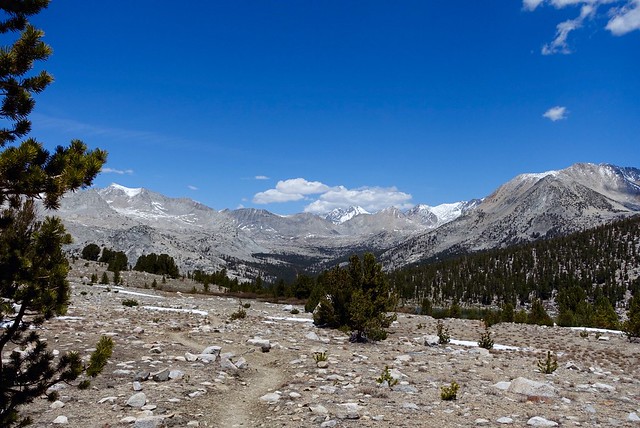 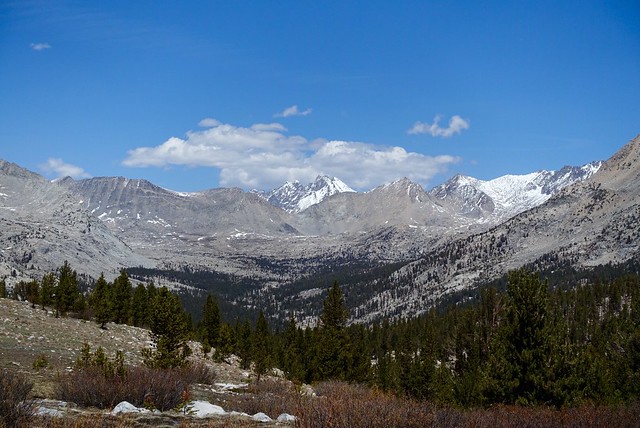 At the bottom of this valley was the south fork of the San Joaquin river, which looked like a difficult ford but I found a log and some rocks a few minutes downstream that made it trivial. 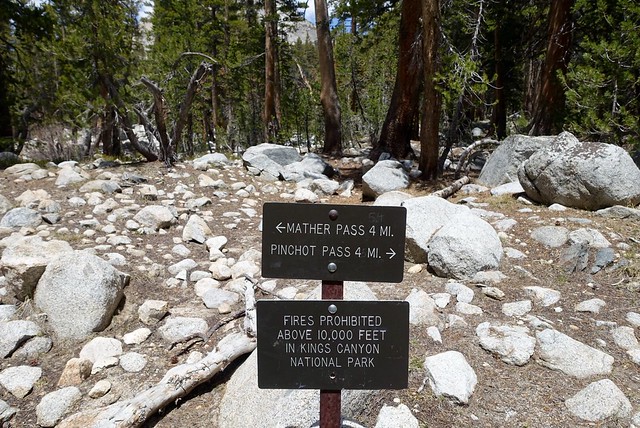 Between Mather and Pinchot, m811 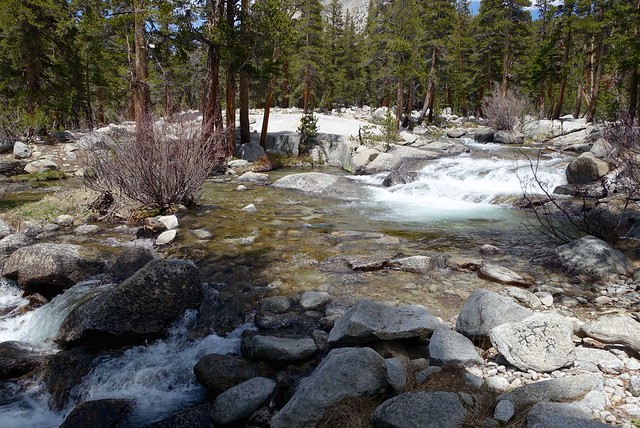 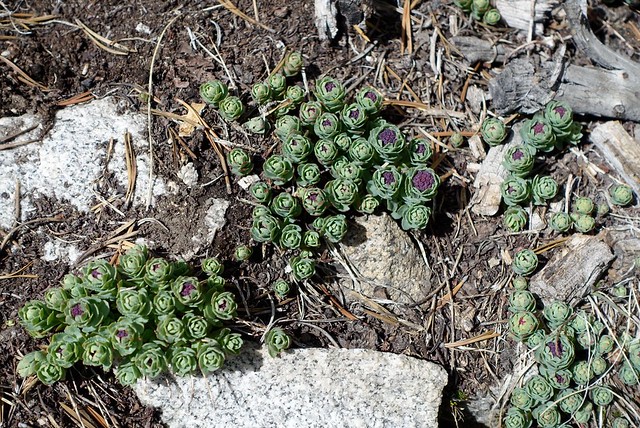 From there, the trail went up and up towards Mather Pass, which you can see for many miles along the trail, a V-notch in the ridgeline with a snowy mountain beyond. 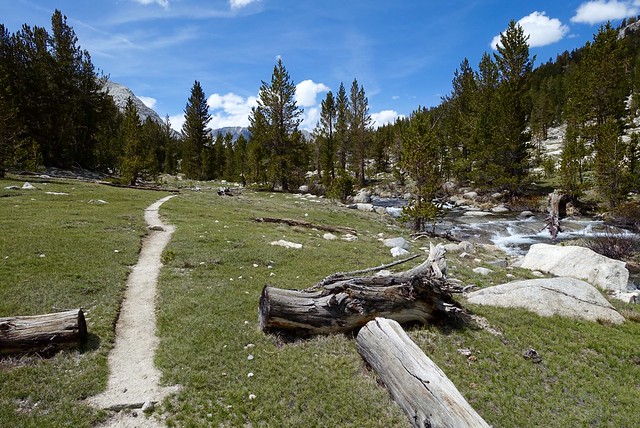 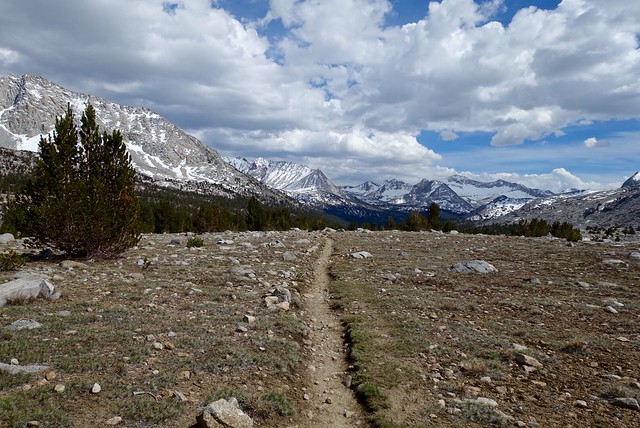 The trail headed up above treeline to a large basin just before Mather that looked lunar, nothing growing. 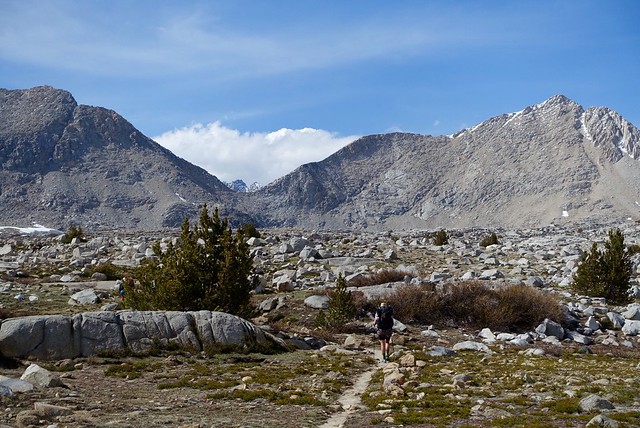 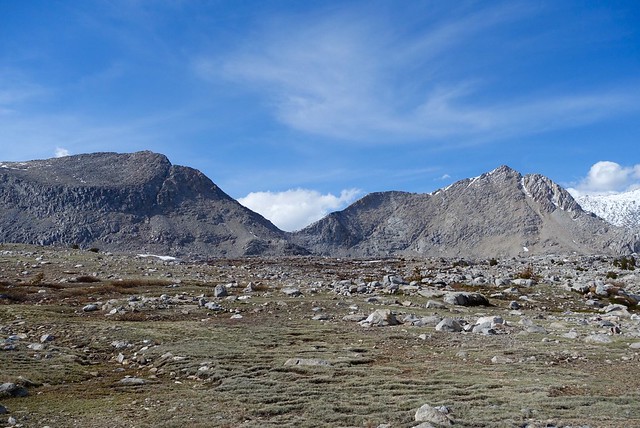 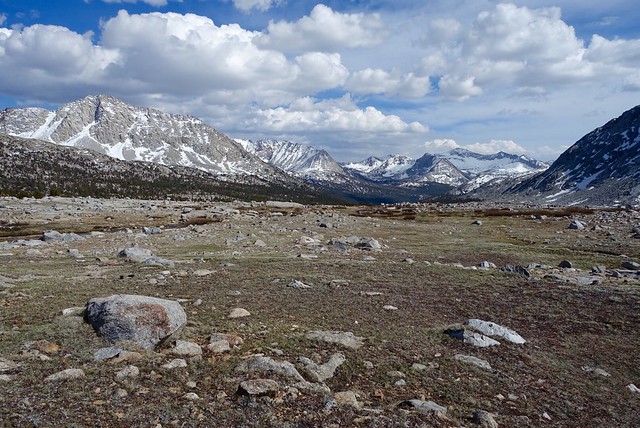 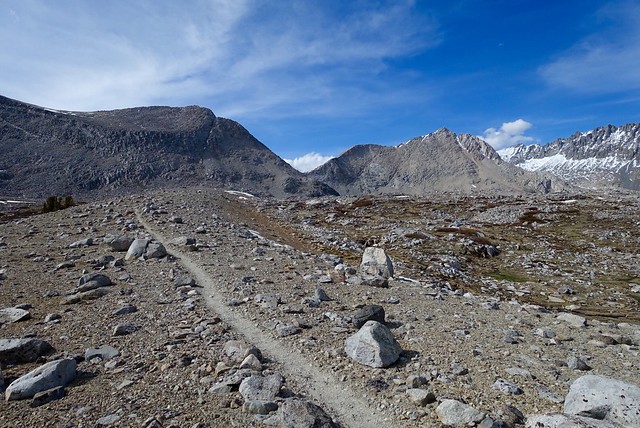 I was intrigued about going over the pass to some campsites three miles beyond, but thought the better of it. I found a campsite just below the pass on granite gravel, with a bit of snowmelt for water I was set for the night. 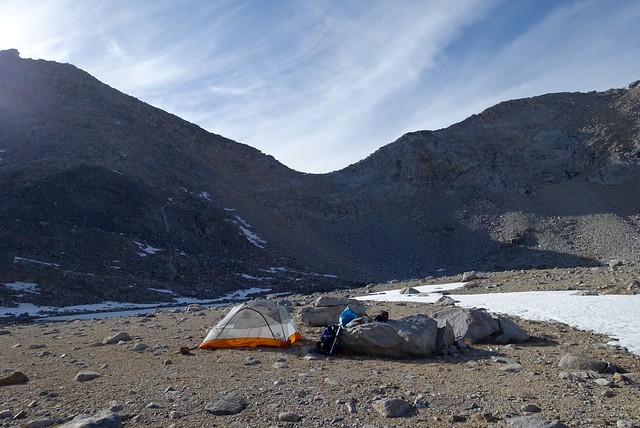 Tomorrow will be up and over early. I like doing a pass a day, and getting them done with, cruising downhill, then uphill to just before the next pass. It's kind of an inverted hiking day (normally when you hike you start low, go up, then come down), and there's certainly more oxygen down lower at 9000 feet than at 12000 feet, but having crunchy snow makes hiking so much easier than wading through soft wet snow. 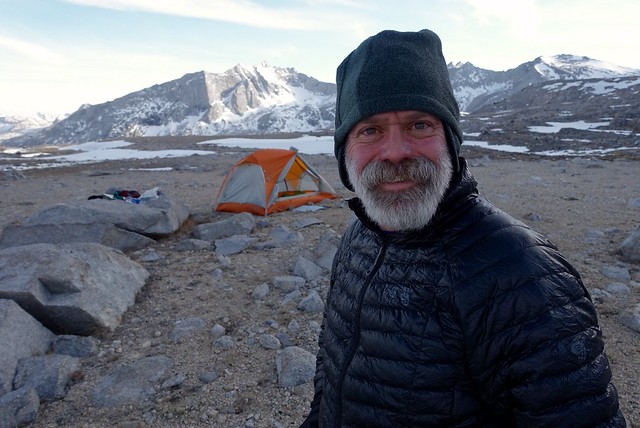 < To Woods Creek below Pinchot Pass To Below Muir Pass >