dan.marmot.net
< To Glen Pass To Below Mather Pass >

I woke up super early at 4:30 and made coffee and oatmeal and packed. I really did not want to go down that scary-looking slope alone, with a half mile of ice sliding down to a frozen lake, or rocks, or maybe a hidden cliff that I couldn't see. So at 6 I was on the trail and walked the 300 feet to the top of the pass to see what the conditions were--they were just too icy, while there were waist-deep postholes from the previous day, the snow around them was glazed and slick and hard. So I pulled out my "yoga mat", that 2 foot square foam that I'm using as a secondary pad to sleep on cold ground or just to sit on, and prepared to wait for someone to show up. 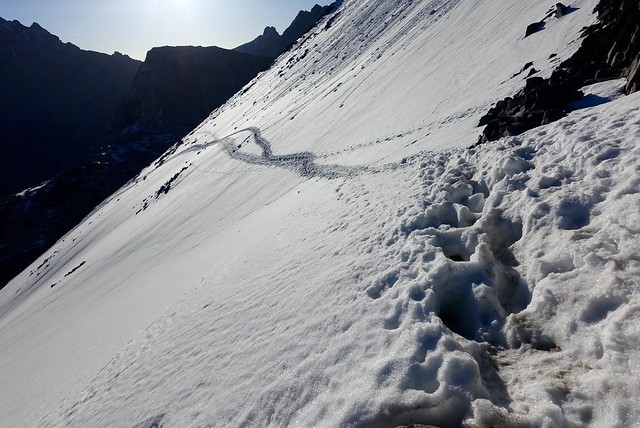 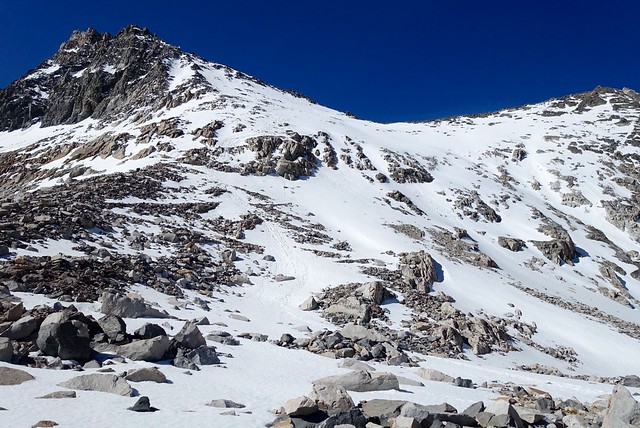 Pulling out the iPhone to check the maps (I had put them in iBooks), it doesn't look like a heavy day, maybe 12 miles or so after the pass. I opened Halfmile's app, and boom, it crashed. WTF? I double-clicked the home button to look at the app list, it was there, so I selected it and boom! Screen flashed white for a quarter second and I was returned to the home screen. I tried some other apps--Guthook, my blog writing app Editorial (excellent), they all had the same behavior. Ugh, at least I planned on a backup--I put Halfmile's tracks and waypoints on my Garmin Oregon 600 GPS, so I'm not totally lost in the woods; not that you could really get lost on this segment of the PCT.

I waited. Snow still to icy at 7:30, so I kept on troubleshooting the bloody iPhone. Mail still works, Safari still works, iBooks still works. Seems like it's only third party apps. Deleted some videos to make some more memory available. Didn't work. Reset the phone. Didn't work. Getting frustrated that on the second day out of a hard section that iPhone decided to take a dump. I'm not pleased at all, but at least I can write blog entries as emails, and still view maps (for now?)

Around 8 the snow had softened so it was crunchy but not sloppy, and another hiker showed up! Yay, his name is Funjumper and he lives near Encintas. We went down the pass together... some postholing as we plunged through the hard upper layers to the soft wet snow underneath, but nothing difficult. It took about an hour and a half to get down out of the snow to the shoreline of the beautiful Rae Lakes. 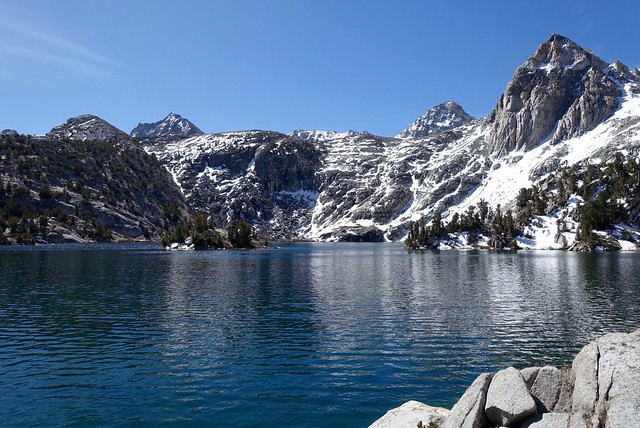 The Rae Lakes are beautiful, and the sunny and warm day made them even more enticing. It had warmed up to a weirdly warm 70 degrees, and I slathered on some sunscreen and took heaps of pictures. Funjumper said he was going to soak in the beauty, and wandered off to take pictures, I sat on a rock and waited for Copenhagen and crew, and let my socks and feet dry out.

After 45 minutes of waiting, though, I said "What am I doing? He might be here in an hour or four? I should hike my own hike." So I just took off down the trail, which followed the south fork of Woods Creek. There was quite a bit of wildlife out--marmots and chipmunks and deer--and it was great hiking for many miles. 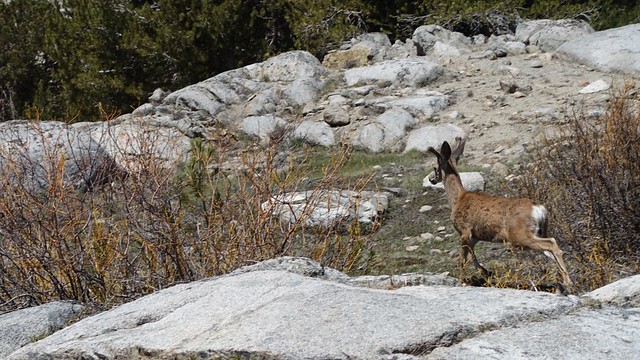 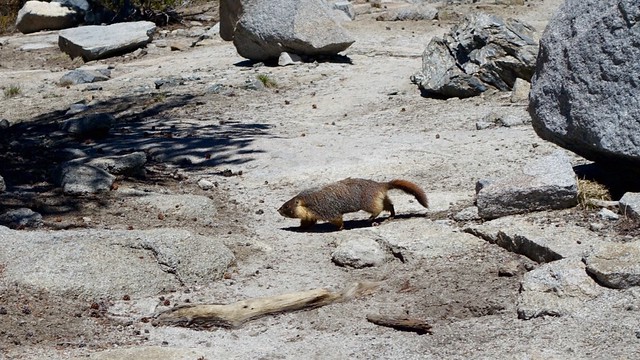 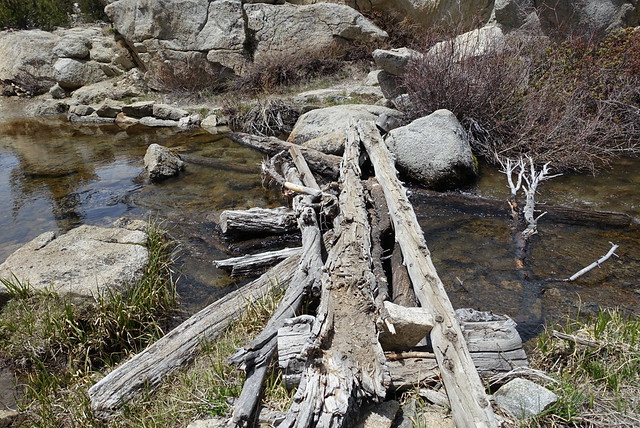 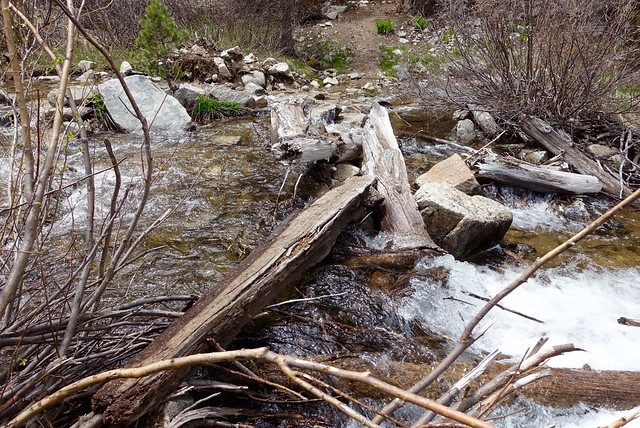 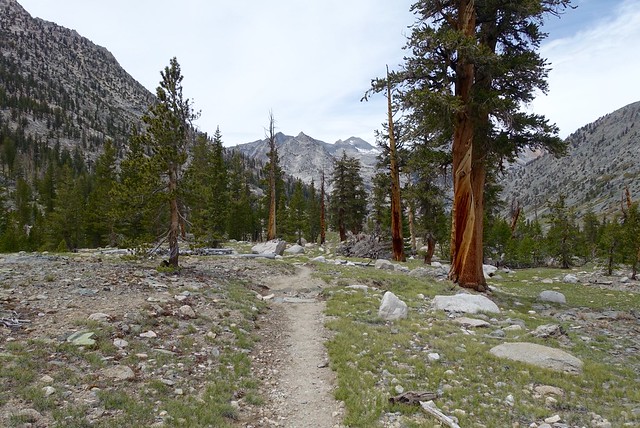 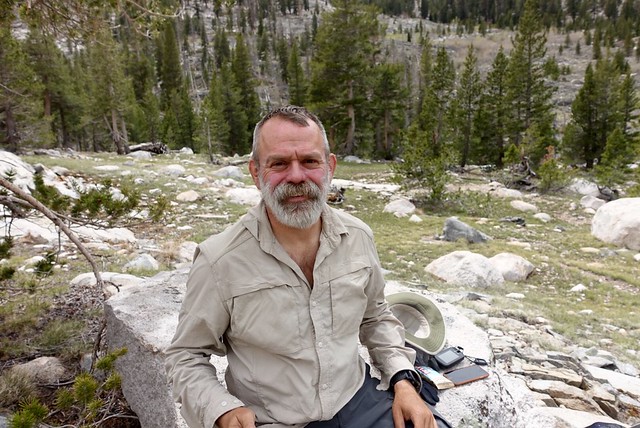 At the bottom of the canyon the two forks of Woods Creek merged into one, and there was a swaying suspension bridge that was a bit funscary to cross. The weather was perfect, even a bit too warm at 75 degrees... and the trail turned uphill. It was maybe 4pm. 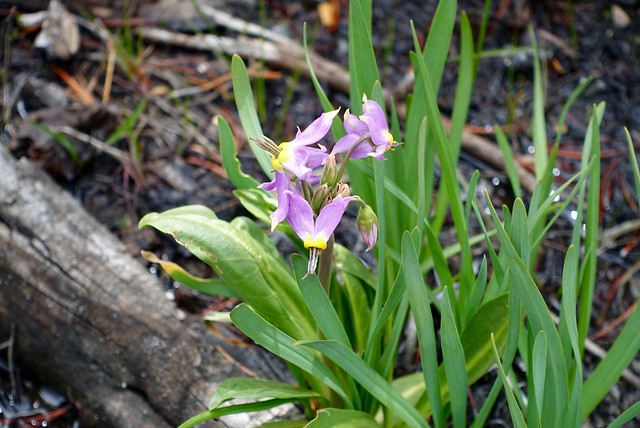 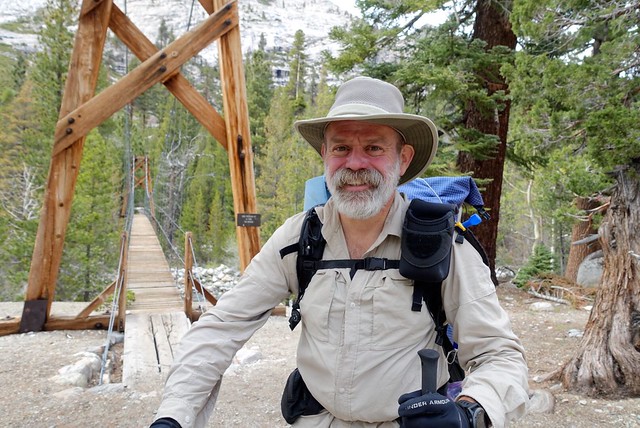 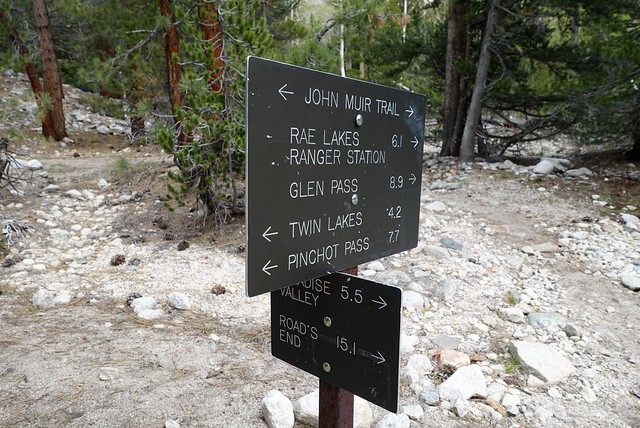 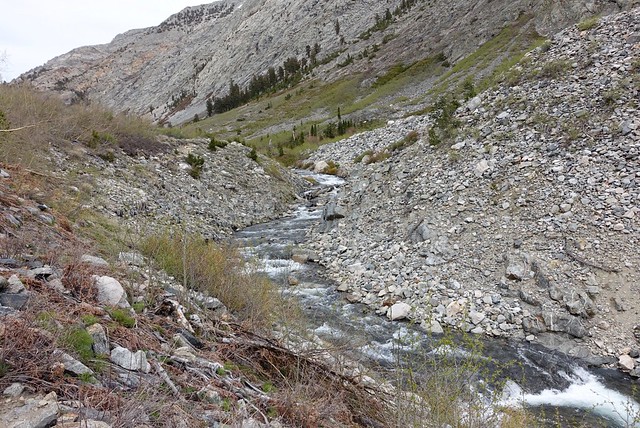 I started feeling twinges of jet lag, ugh, and coughed up some remnant green snot. (After getting back to LAX two days ago, I quickly visited a clinic for a five day sinus infection and got some Augmentin which was pretty much working... until now.)

And that jet lag just made me feel all mopey, like I don't belong here on the PCT. Japan was so much fun... its putting a damper on this trip. Chris and I should do something like this one year, like hike the JMT or just the PCT itself. I wondered how far I would go today--I had planned 15 miles, but was really dragging, and when I passed a campsite with a log bench I said "that's it. I'm done. I'll be fresh in the morning."

Two other hikers showed up and camped near to me, yay. I introduced myself, they did the same. They were Double Happiness and Dirty Bull, and we had a great time chatting about things (like Myanmar, go figure, they'd both been there recently), and I crashed and went to bed. 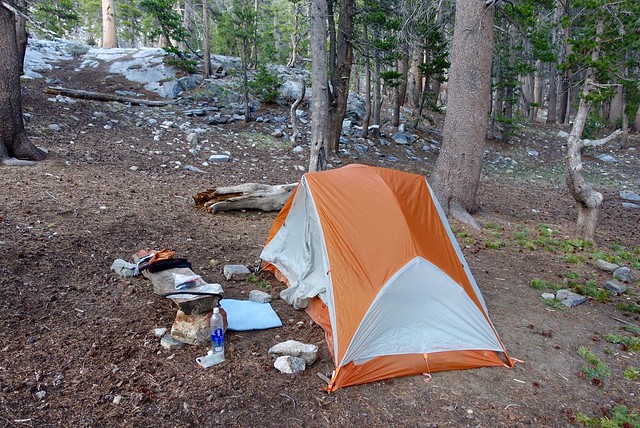 Yay, I'm not camping alone today! But the iPhone thing is still really bothering me. I spend another half hour before bed trying to make third party apps work. Grrr. No luck. Must sleep on it.

< To Glen Pass To Below Mather Pass >