dan.marmot.net
< Back on the trail, summer is here! To Woods Creek below Pinchot Pass >

I slept really poorly last night--I tried to stay up as long as I could, which was until 10pm, then I fell asleep and was wide awake at midnight and couldn't get back to sleep. Grrrr. Finally, around 3am, I nodded off... and woke up at 6am to pack and get the hotel breakfast. I'll be hiking on five hours of sleep, and I know the jet lag will start kicking in around 5.

My pack really didn't need much packing--I'd done most of that at the Motel 6 yesterday--and took my pack out to the hanging scale to weight. Whelp, it weighs 44 pounds, which is about what I expected. I've got food for eight days, two liters of water, microspikes, my ice ax, and warm midlayers for my legs and torso that I normally wouldn't take. This is the Sierra, though, and I better dress warmly. Oh, and of course, I have the bear canister. All of the extra gear for this segment weighs about 8 pounds, and that 7 days of food is around 12, with the water weighing a bit over 4. I also discovered I packed 5 pairs of socks, oh well. The Injinji socks I like only last a few hundred miles, so I'll be down to a more normal 3 pair soon enough.

I take advantage of the breakfast, even though I wasn't hungry, and met up with a couple of other hikers there, Ravi and Brad, wondering if they'd be my buddy... but they both weren't continuing north on the PCT. Strider, the owner of the excellent Mt Williamson Hotel, drove just me and her pup up to the trailhead, picking up a hitcher named Thierry who took off quickly ahead of me, and I never saw him again. 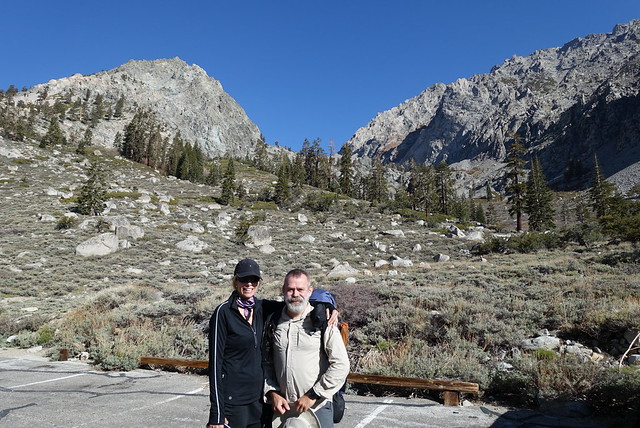 Strider sees me off 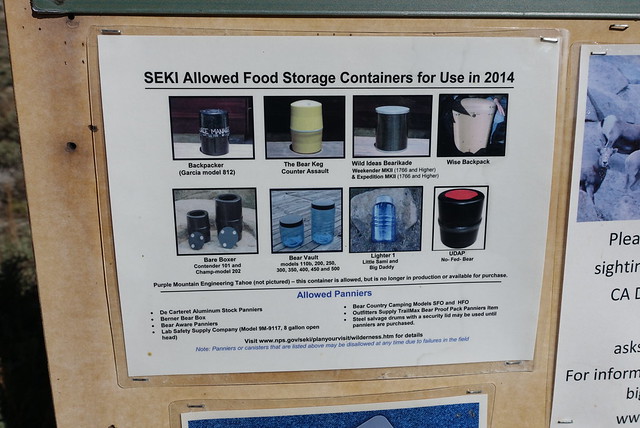 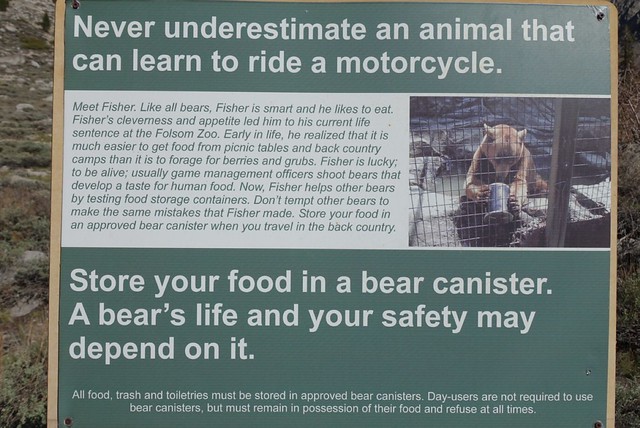 Once again, sigh, I was by myself and feeling all awkward, especially as I'm now seeing other hikers. There were 5 hikers on the bus yesterday down from Bishop, and they all fist-bumped and knew each other, and sadly I sat there kinda left out, sniff. I guess I don't look like a thru hiker with my short gray beard, and I sure don't smell like one anymore, but it would've been nice to make smalltalk. They were kinda into their own thing, and I didn't feel like intruding.

But hey, I've been alone, and a couple of times I stopped as I walked up the trail, uncertain as to whether Chris was in front or behind me, then realizing it was neither and he's at work in his SkyCube probably feeling tired and off-kilter like I am. Surprisingly, my 44 pound pack felt right, not too heavy, and my legs felt good. The one thing that did get me a bit was the air; the trailhead's at 9200 feet elevation and the trail goes to 11800 feet before heading down the other side of the Sierra crest. I stopped pretty frequently in the five miles to the top of the pass, catching my breath, but I didn't feel winded at all. The scenery was great, the temperatures were in the mid 60s, and it was sunny. A great hiking day. 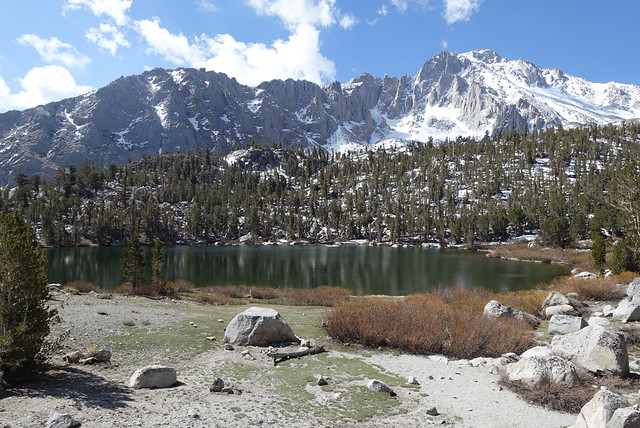 At the top of the pass, I took some shameless selfies and sent them off to the Interwebs, my last contact for a week. Then someone down the trail yelled "Marmot!" and I went 'whaaaa?'. It was Copenhagen! I'd last seen him with his buddy Insatiable Toast at Warner Springs. They were taking it slower than I was, but he was surprised to see me again. It was a good reunion, he and the couple he's hiking with aren't going too far today, and I probably shouldn't either. 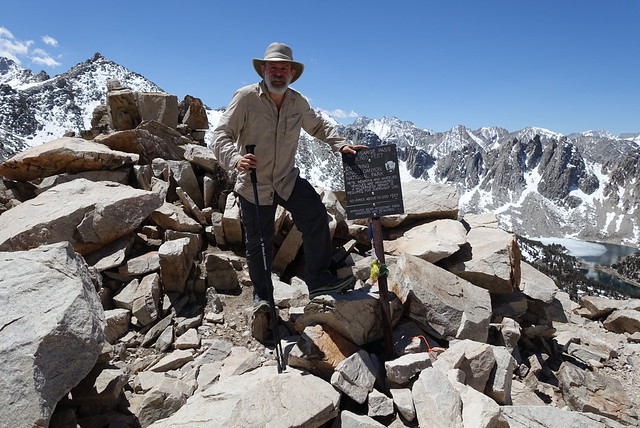 The hike down the west side of Kearsarge Pass was even more beautiful than when I last came through a month ago, on a cold overcast day. Today was sunny and blue skies with puffy clouds, and the ice on the lakes below had all melted, along with much of the snow in the valley. Super pretty, and I cruised a bit ahead of Cope and the couple to rejoin the PCT. 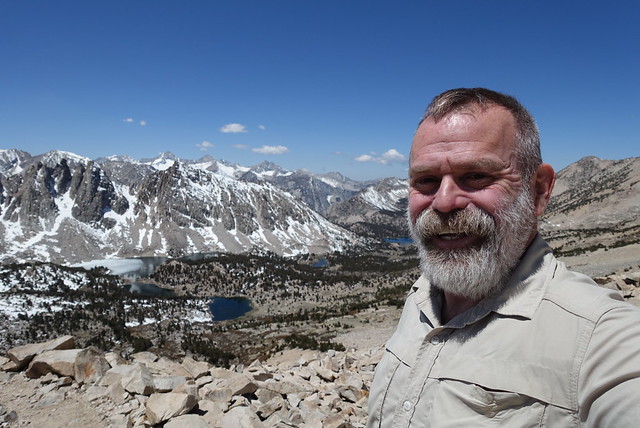 Happy to be back on the trail 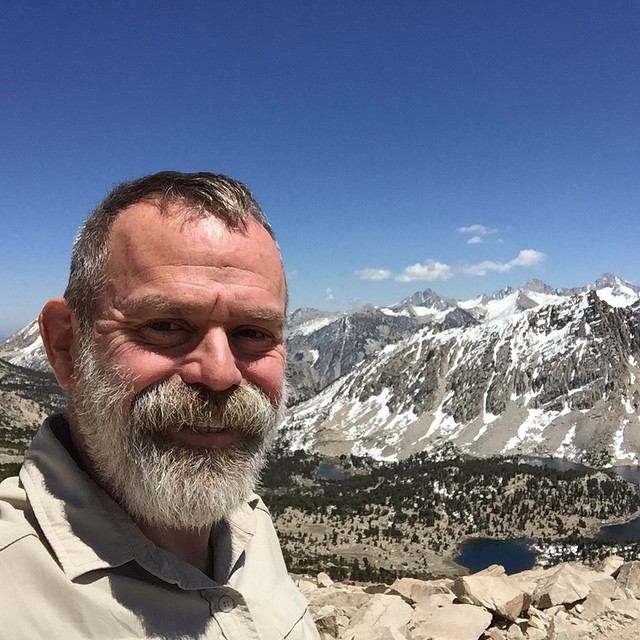 Kearsarge Pass, looking west. Catch you all in a week. 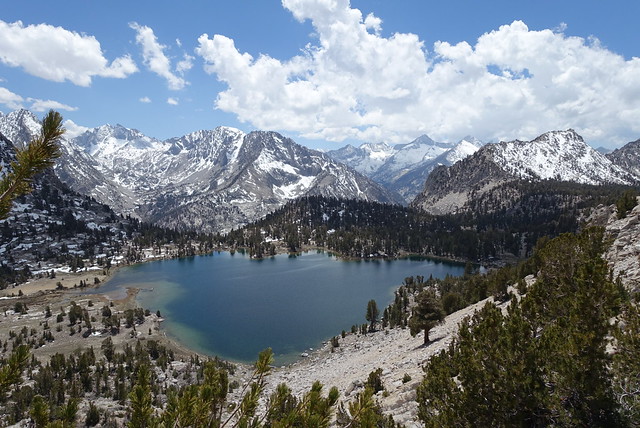 Right at the PCT, I bumped into a guy who'd just come over Glen Pass, and chatted him up. He advised us to go over the pass in the afternoon, when it's softer, rather than in the morning when it's icy and dangerous. Uh... that's the opposite of my plan, I want the snow to be firmer so I get some traction, but not so soft I sink in. That sounded like an intriguing was to approach the problem, and at a rest stop just seven miles from the trailhead the others asked me what I was going to do: go up and over the pass to Rae Lakes today, or go over in the morning?

I was ambivalent either way--I hadn't seen any snow on the trail yet, but there's been a bit int the last month, heavy wet snow that hasn't consolidated well. They were very much leaning towards doing the pass in the morning... but I also thought that doing it in the afternoon would be good; there were six other guys who'd gone over and perhaps I could follow in their footsteps and avoid postholing? That sounds good. I told Cope and company that I'd go to the campsite and wait and decide.

Well, I got to the campsite, and waited an hour. Where are they? I walked further and found the first snow on the trail around 11,000 feet. It was heavy wet snow without any crust, and you could almost wade through it like you were wading through a Slurpee. Or you could just walk in the foot holes. Not too difficult, so I decided to make for Glen Pass rather than wait anoher hour. It was 4pm, and it's 3 miles to Rae Lakes over the pass. I could knock that out before sunset and catch up with one of the other groups.

So I motored on up the pass with only the slightest snow to contend with, then glanced down the north side. Uh, it was fully white. No rocks, nothing, just a 45 degree snow slope with tracks traversing to the east, following a level contour, then disappearing around the edge of the hill. That slope was really long--it went down maybe half a mile to some rocks, and the traverse that I could see was at least 200 yards long. It very much looked like something I should NOT do by myself, even with the ice ax out to self arrest. 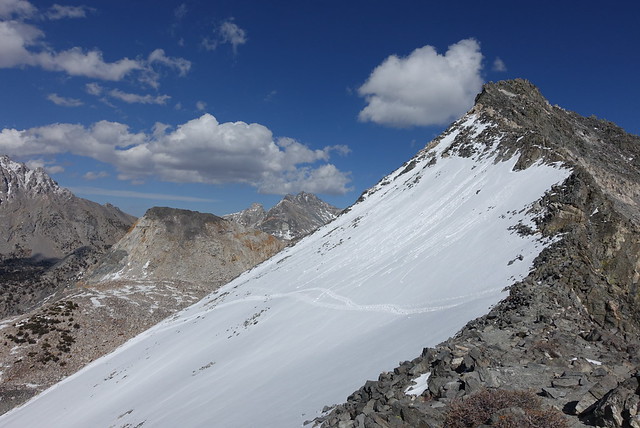 So what to do? I spotted a shelf just below the pass, found a tentsite out of the wind, and setup camp and melted some snow on my black rain kilt for water. 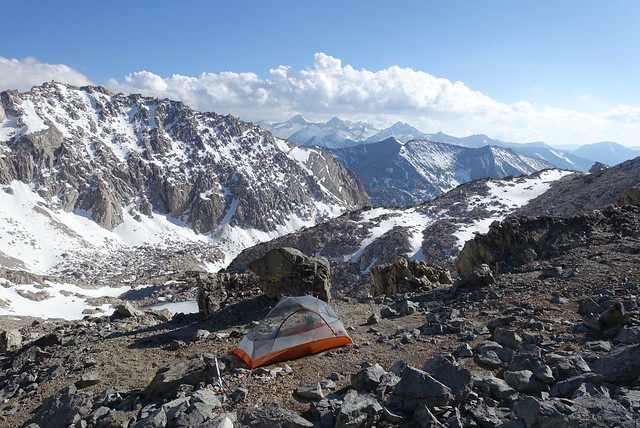 And I started feeling depressed. Yet again, I'm camping by myself, making dinner in my tent, feeling isolated. Why didn't I just stick with Cope rather than taking off on my own? That was silly. I then thought more... I'm the high school kid in the corner of the cafeteria again, that same feeling I got a few weeks ago in Wrightwood that I don't belong. Ugh, and more negative thoughts came along too: I don't belong here, I can do this but it's not my thing (like I can, oh, drive a school bus but it's not my thing), I can't ever relate to the 20 somethings on the trail because they're a different generation, I should just give up, etc etc.

Part of this no doubt comes from jet lag, and the abrupt change from hiking with Chris in Japan to suddenly taking a zero day then getting back on the PCT. We had such a great time and now sorry, I can't have that, I have to do the PCT for over three months on my own before I can return home. Feh.

I know that this is a bit of depression, and some of it stems from anxiety about doing something I don't like doing or feel confident doing (crossing a scary-looking snowfield). And I know I should just sleep on it--especailly after those short interrupted five hours of sleep last night. I'll just put away this writing now and see what tomorrow brings. Good night.

< Back on the trail, summer is here! To Woods Creek below Pinchot Pass >