dan.marmot.net
< Back on the trail To Wrightwood in the blowing fog >

A hard day's walk uphill from I-15 and the Cajon Pass.

We woke up far too early--Chris is still kind of on East Coast time, I just couldn't sleep well on last night's heavy Mexican food. The clomping from the second floor room above us starting at 4am didn't help either. What were they doing up there for an hour? We just gave up and headed to the lobby for breakfast before heading out to the trailhead.

Chris dropped both Devin and I off at that little stub of a road (and former Route 66) that dead-ends at the PCT, and we headed down under the freeway, passing another hiker's tent in the concrete drainage channel. Not a nice place to camp, with the ten lane highway above and the two always-busy train lines just to the west, trains lugging of containers to and from the port of Los Angeles and blaring their horns at all hours. It must echo something fierce through that concrete channel. 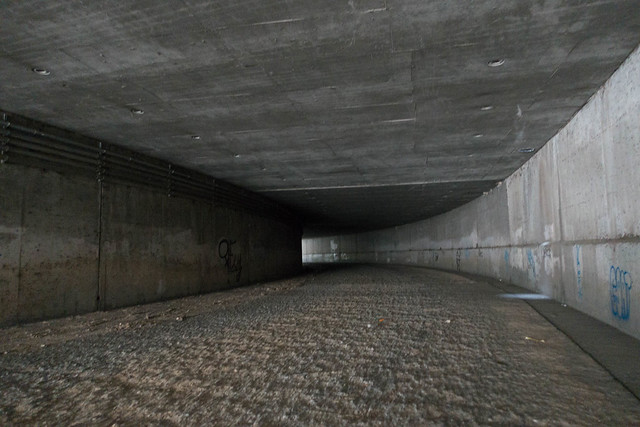 My pack was really heavy with five days of food and six liters of water, and I knew today was going to be a slow day; not only was there all that weight but the trail went up from 3000 feet to 8500 feet in 20 miles. It wasn't going to be steep, but it was going to be a relentless, just up and up, and I hoped it wasn't going to be too nasty hot and/or windy in the afternoon. The weather's often ugly in the Cajon Pass, with blowing dust and the too hot sun. 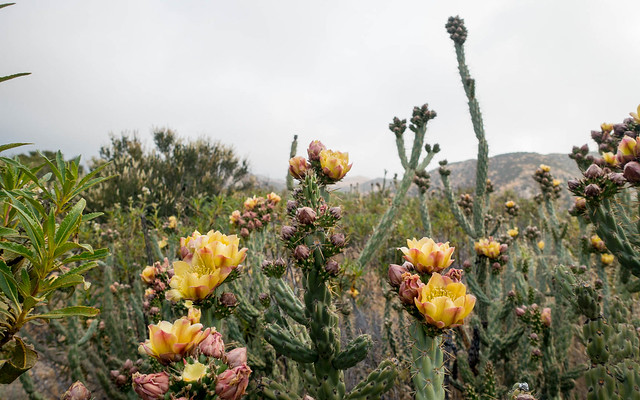 Today wasn't one of those gross ugly days days; in fact it was the opposite. It was cool and overcast and felt like somewhere very different than where we were on the edge of the Mojave Desert, maybe we were in some part of a windless Patagonia or western Tasmania. The overhead clouds had rolled in overnight from the Pacific Ocean nearly a hundred miles away, and this May Gray kept things nice and cool, almost too cool, great hiking weather. The mistiness did obscure the views of all the weird rock formations, though, and with the trail turning all sorts of ways around the tracks and the freeway and the rocks I got pretty turned around without the sun to provide some sort of direction. We were crossing the San Andreas fault, which has pushed up large weird rocks all around us, but mostly we just saw the trail and the chaparral brush for several hundred yards around us before the scenery all faded to gray. 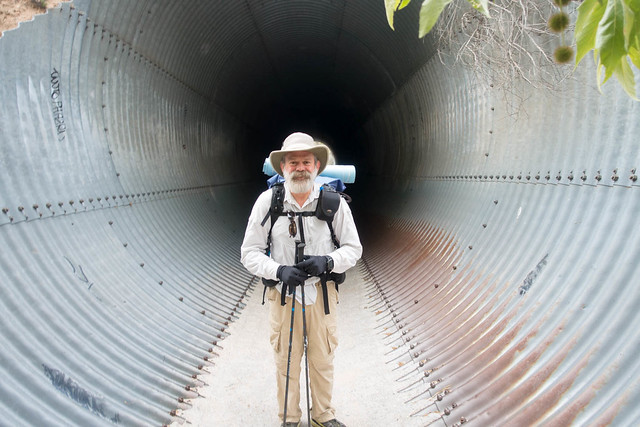 Under the railroad tracks, m342 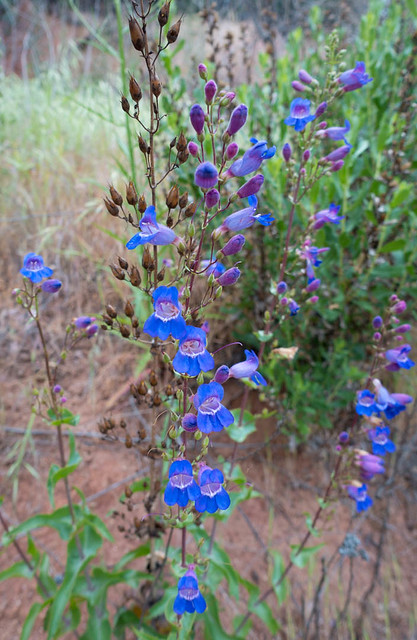 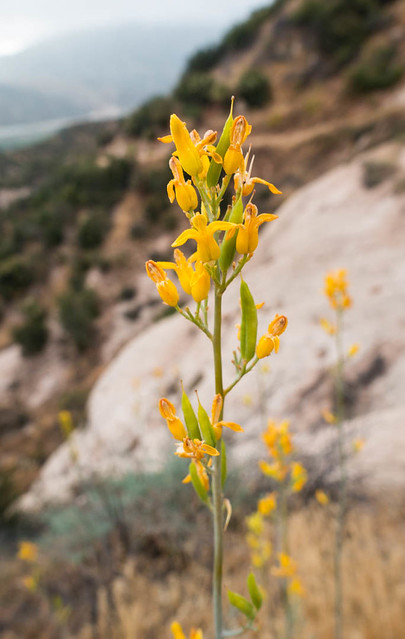 After those loops and turns west of I-15, and a tunnel under the railroad tracks, the PCT hopped up and over a ridge to a parallel desolate valley to the west. We stopped at a cache and signed a register, then ascended into the hills on the trail. These first five miles went quickly, but I really was starting to feel Not Well, with my tummy gurgling and cramping a bit. I really let Devin get far ahead so he wouldn't get crop dusted by my noxious emissions... and so I had some privacy on the couple of times I had to quickly go squat in the bushes, and then clean myself up. Ugh. 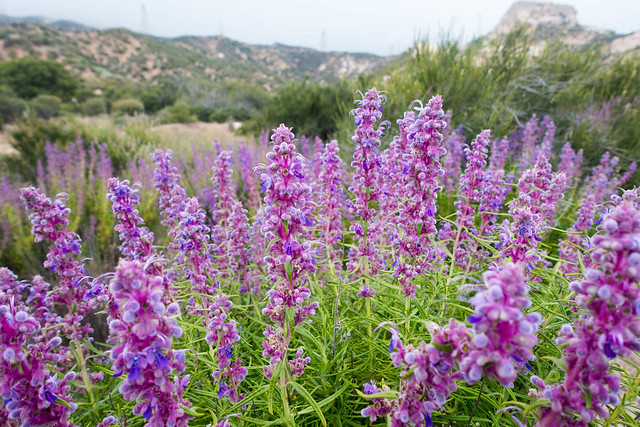 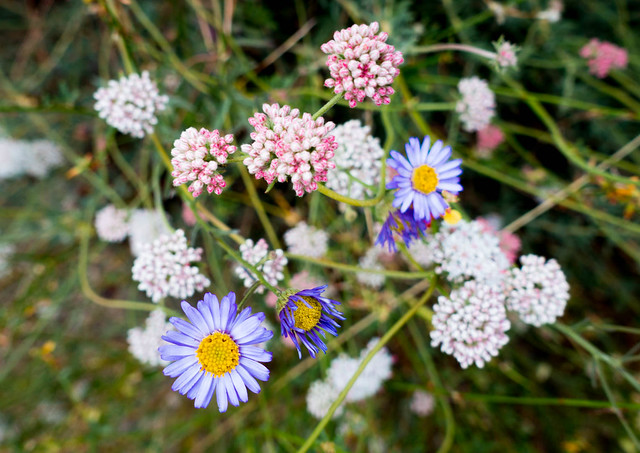 I tried to become interested in all the wildflowers, like I normally am. It sort of worked, there were lots of wildflowers blooming, and different ones I hadn't seen when I was last in the area a month ago. The ceanothus had all faded, but the golden ear-drops were out, as well as lots of fremontia and buckwheats and asters and clematis and dudleyas and delphiniums and a few others I don't know the names of. I was also keeping a sharp eye on the shrubberies for any last second escape routes, but really didn't need to use the landscape after the second emergency detour, and was happy about that... especially as we had already encountered six or eight other hikers on the trail, and I really wasn't up for letting them in on my secret GI woes of the day. 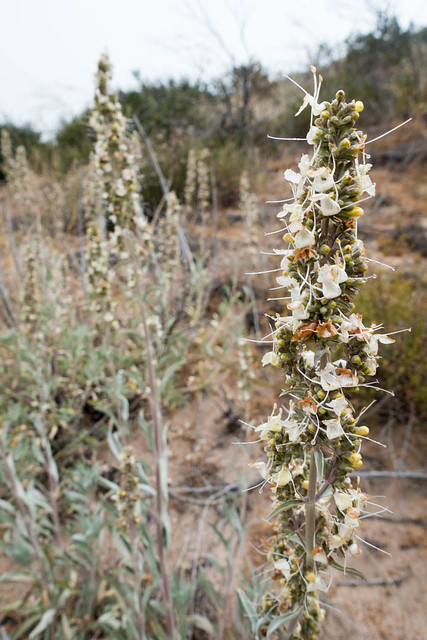 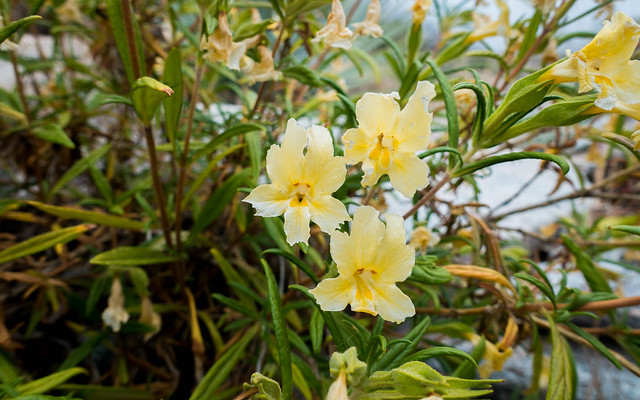 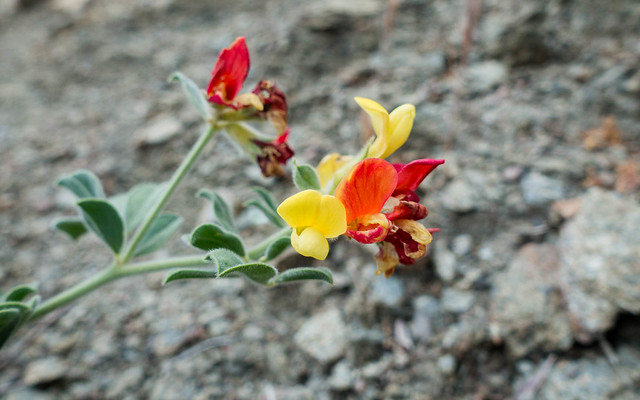 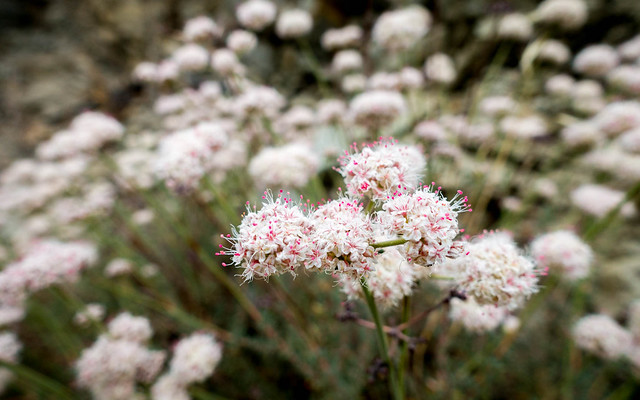 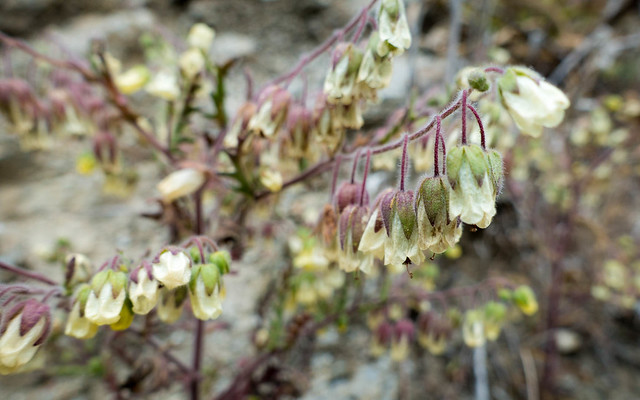 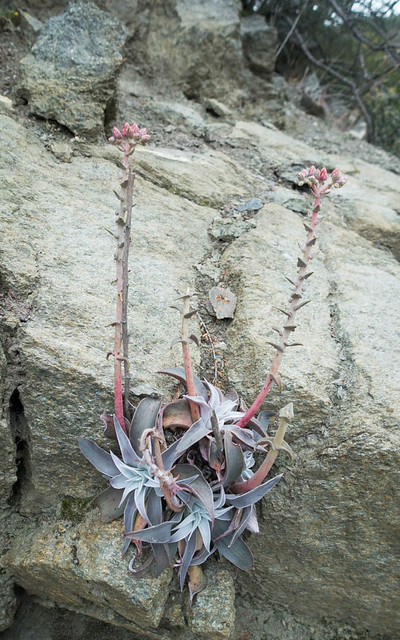 At the 5000 foot elevation level, some 10+ miles in, oak trees started appearing, and the trail broke through the top of the clouds into bright sun. Yay warmth, and the lizards all started coming out as well, warming themselves up everywhere. I caught up with Devin at a lunch break with another hiker, Brett, who recognized me and gave me compliments about this blog; he's read it every day since I started. Thanks for reading Brett. They took off and I drank a bit of my water. Why the hell did I carry six liters of water? It's been ten miles and I've just drunk not even one so far. 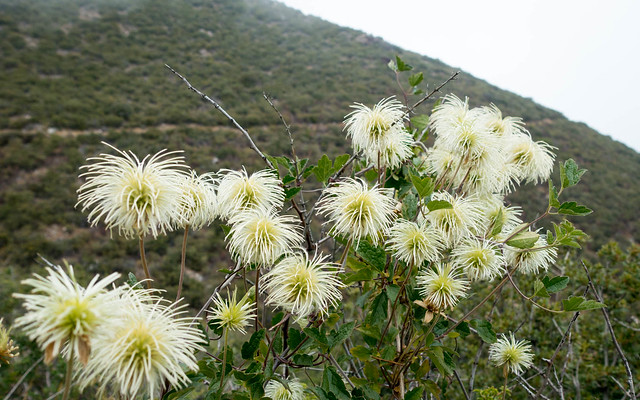 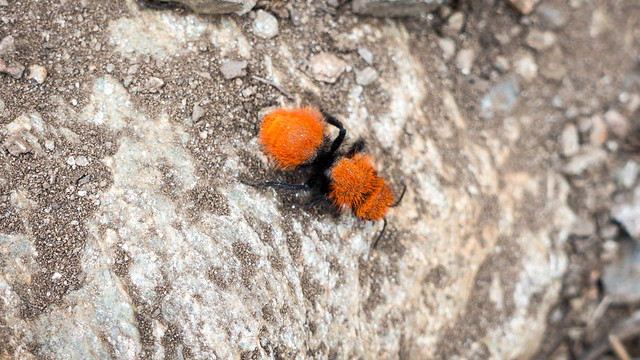 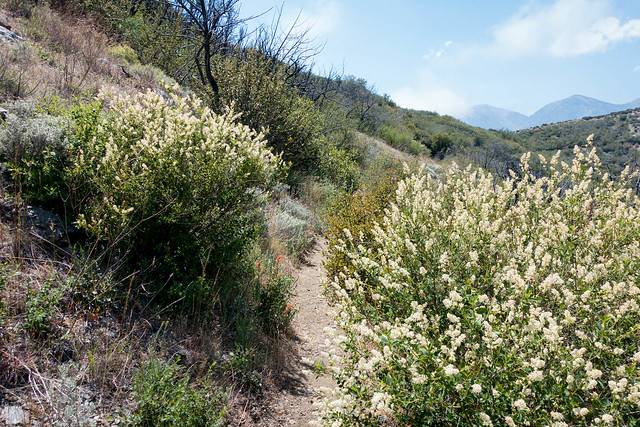 The trail ran up and up the ridge, getting higher. Around mile 355 there was a little handwritten note "Avoid the poodle dog bush! Take the road and it rejoins the trail in 1.5 miles." Uh, really? I'm not going to let some bush chase me off the trail. I took the trail and was fine, the PDB was there but easy enough to avoid. 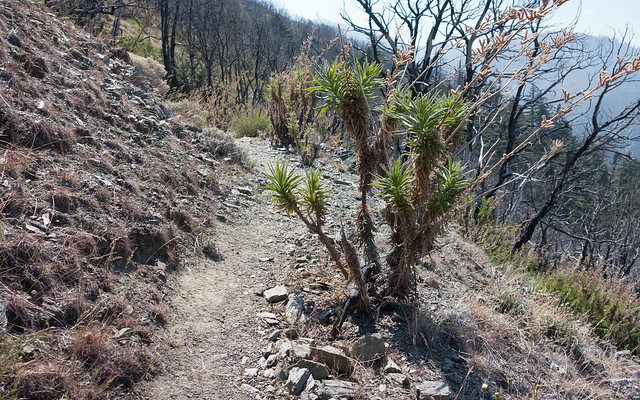 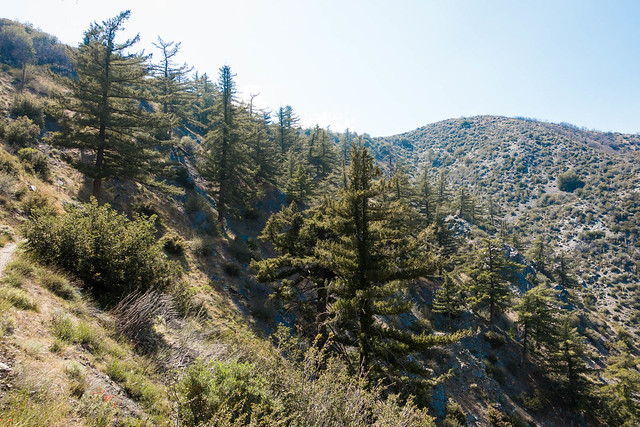 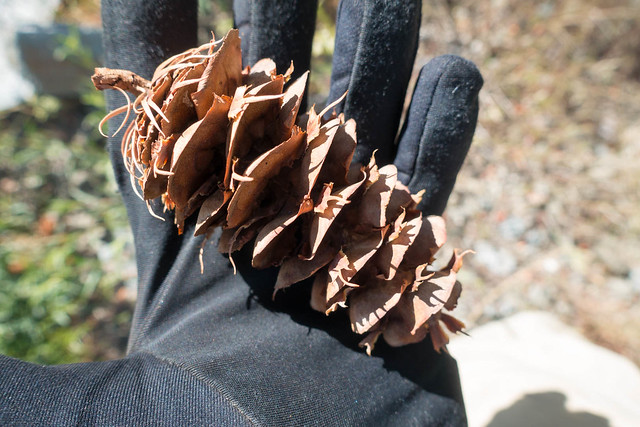 As the trail got even higher I encountered one of the more peculiar plant species on the trail: the big-cone Douglas Fir, native only to southern California. It's in the same genus as the real Douglas Fir, the king of the Pacific Northwest and found across into the Rockies, but the big-cone is only found in the southern California mountain forest. Big-cone Douglas Fir is not only resistant to fire, it's adapted to fire--it's got little dormant growth buds on its horizontal branches, and when a fire goes through and burns off the green needles, leaving bare branches, it will quickly sprout a new set of needles and keep on truckin'. Anyways, the cones are bigger than its sibling species (hence the common name) but they still have those little tassels that say "I'm a Douglas Fir" 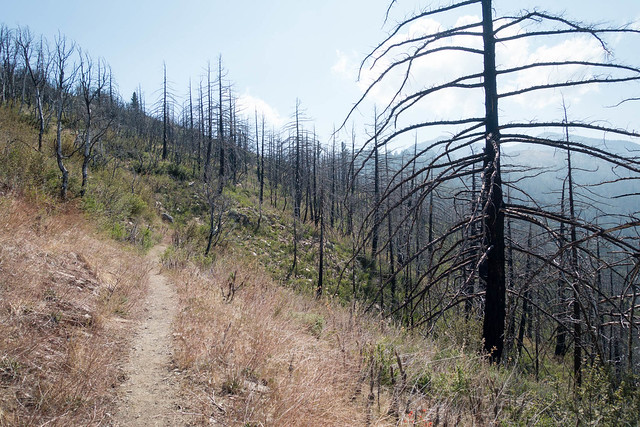 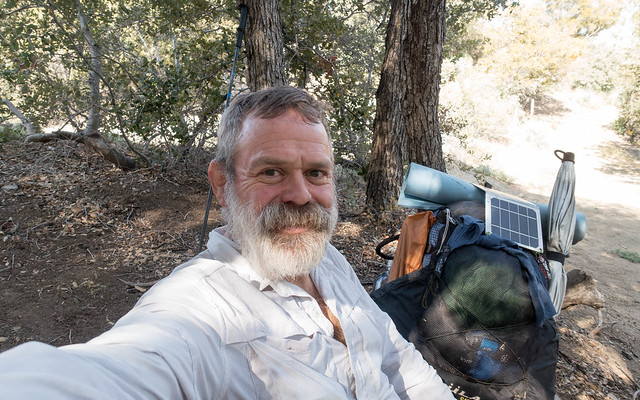 After an afternoon break at 4, I was thinking "there's no way I'm going to catch up with Devin and Brett." We had planned to catch up at Guffy Campground, but my trail diversions had chewed up a lot of time, and I still just wasn't feeling well. So I took some time and checked the weather report and went "whoa" -- snow starting tomorrow afternoon, low of 22 overnight near Big Pines (about 10 miles down the trail), snow showers all day Friday, gusty winds to 30 or 45mph, clearing out Friday night. Uh, I am not going to walk all day Friday in snowy windy weather. That's no fun. So I decided that tomorrow I'd get a ride down to Wrightwood, spend the day hunkered down in town, and get back on the trail on Saturday. 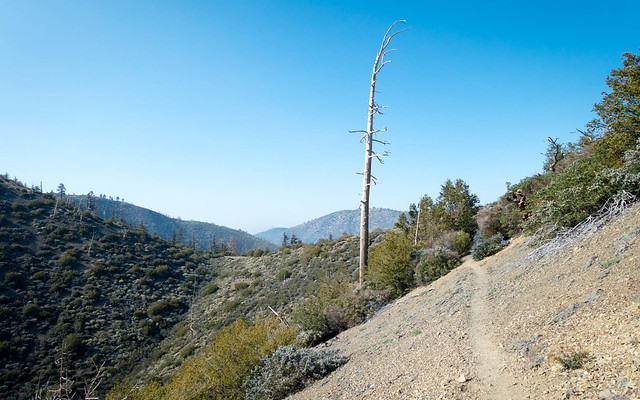 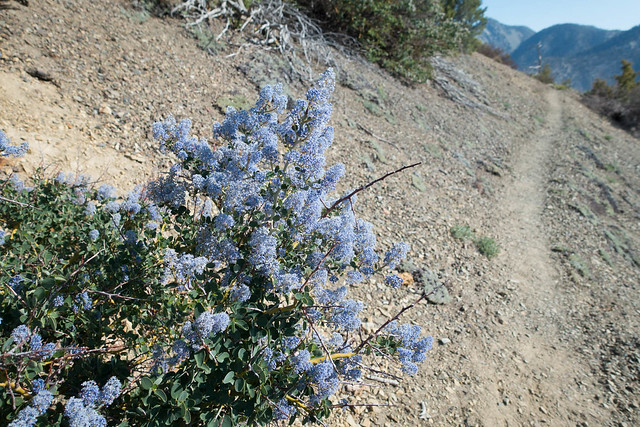 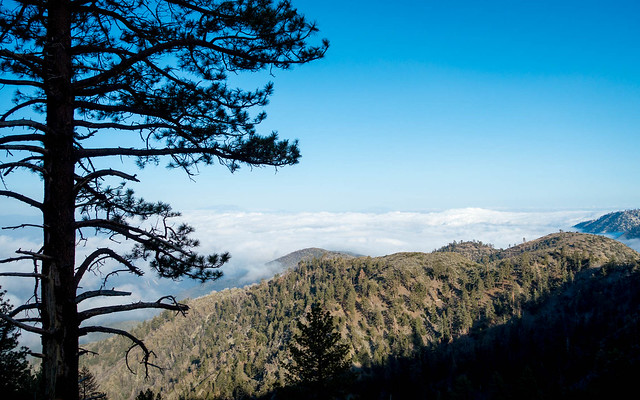 As for today, well, the weather guessers at the NWS predicted 15 to 20mph southwest winds overnight, so ideally I wanted to find a campsite that had some wind protection, which isn't quite that easy when you're high up on a ridgeline. Those last few miles were plodding and tedious and just not fun. I spotted a few hopeful places on the topo map, saddles and flattish areas between contour lines. The first saddle already had two tents in it and no real room, I moved on on. The second flat area wasn't quite so flat. Nah. The Gobbler's Knob campground was more like a road intersection with a fair bit of glass and shotgun shell casings (was it ever a campground?). At least I had a few hours of daylight, now if I could only walk a mile faster than 40 minutes.

At mile 360 though, down off the trail a hundred feet, there was a nice flat saddle with a large bush to the southwest as a wind buffer... and more importantly, no tents. Score. I set up camp there, tying down my tent well, made some dinner, and felt better so I wrote a bit before collapsing into bed. It was a long and tedious day, not my favorite by far... but so far on the trail, tedious days are often followed by excellent days, so we'll see what tomorrow brings. 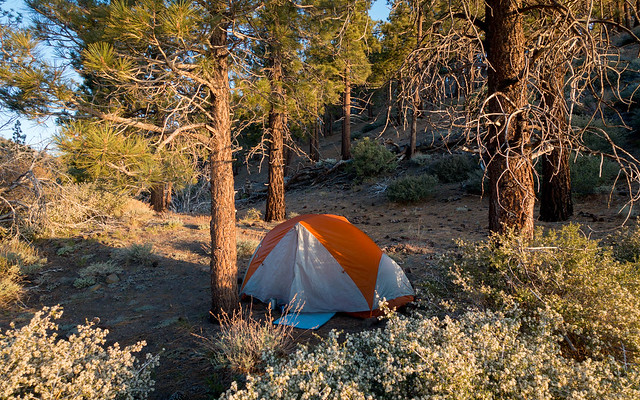 < Back on the trail To Wrightwood in the blowing fog >