dan.marmot.net
< Up from Cajon Pass Back to base >

A short day to traverse the south ridge above Wrightwood, then into town for the afternoon and night.

Last night was warm. Though I had camped at 7300 feet, it didn't get much below freezing, even though the skies remained clear above me. When I woke, I could see a vast layer of marine clouds in the pass below, and San Gorgonio and San Jacinto peaks once again, sticking out like islands off in the distance. The view reminded me of the view from Teide in the Canary Islands, looking across the clouds to Las Palmas and the other islands in the archipelago. I'd guess there was some sort of warm inversion layer around 5000 feet, forcing a blanket of clouds down across the lower elevations. SoCal weather can be so odd, it's not always 72 degrees and sunny. 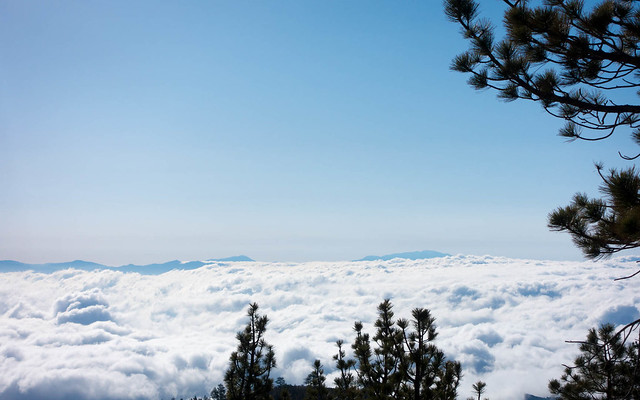 Today, as planned, was going to be short: just walk the remaining miles to the Angeles Crest Highway (highway 2), then get a ride into Wrightwood and hang out until the upcoming storm's passed. The forecast calls for snow showers to start around 11am, so I didn't want to dawdle in the tent; I just quickly threw things in my pack and got on the trail. I'll have plenty of time to sort everything out at the motel.

I was happy that I camped up so high at 7300 feet last night, as it meant I only had some 1200 feet to climb in elevation, before decending to the Inspiration Point highway crossing back at 7300 feet. It was kind of cool and breezy in the shady slopes, mid-30s, and I was glad I put on my silk base layer leggings under my hiking pants, along with my warmer gloves and fleece beanie, though I wore just my standard long sleeve hiking shirt and lightweight rain/wind shell. I was plenty warm, and stopped here and there when the trail popped out into the sun to get even warmer. My thinking now about hiking in cool conditions is "stay just warm enough not to sweat"; if I become too hot I'll start sweating and the wetness will make me colder, not warmer, especially when the wind picks up. 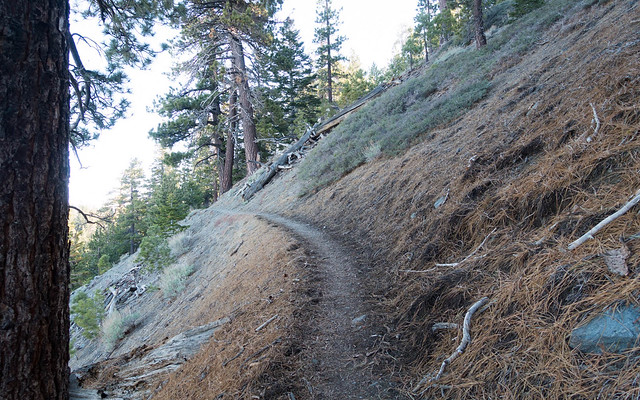 And indeed, the wind did pick up as the trail ascended up to Guffy Campground, which looked like a great place to camp when the weather's decent... which it was most certainly not. The campground is on the top of a ridge, and the fog was blowing from the southern side of the ridge through the pines, condensation dripping on the ground, murky and atmospheric. The temperature was just above freezing, and I mentally noted "this is hypothermia weather, keep moving!" and really started craving a hot bowl of soup. I wondered if the snow showers and thunder would arrive early too--how would I know when I couldn't see much above the fog? Yeah, keep moving.

The trail tracked west along the ridgeline, skirted the top of Mountain High Ski Resort, headed through some of the resort ski trails, green with grass now and no snow to be seen. Right at the edge of the very steep ridge, the moisture from the wind was frosting the trees, flocking the needles like some 1960's Christmas tree. I'd never seen that before, and as I walked the wind gusts would shake some of the frost off across the trail, raining down as these odd rectangular shaped chunks that looked like chopped white onions. It was literally cool. 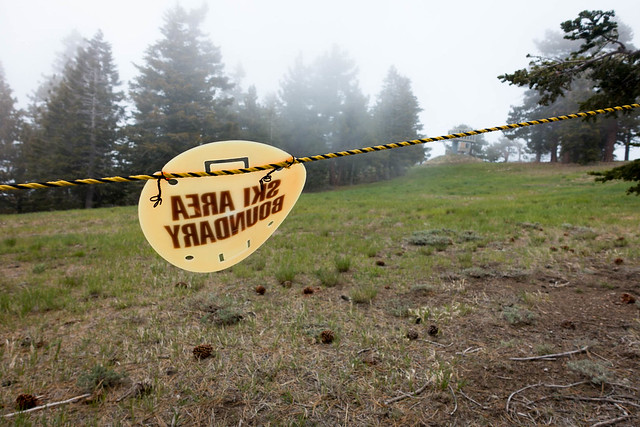 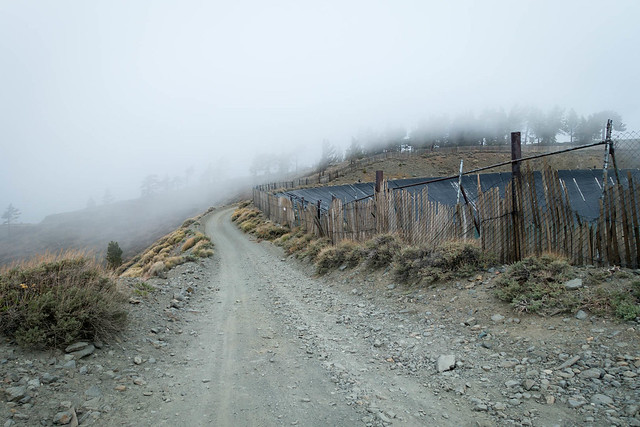 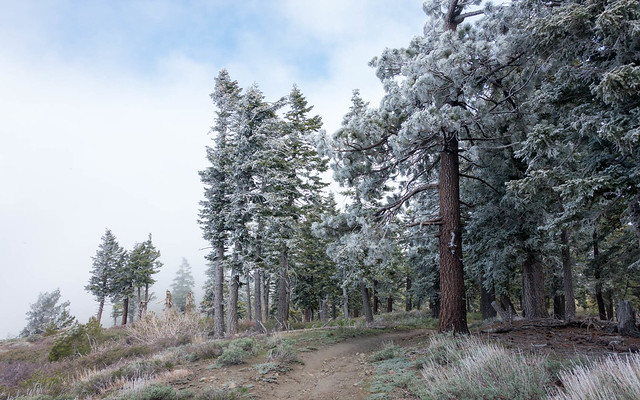 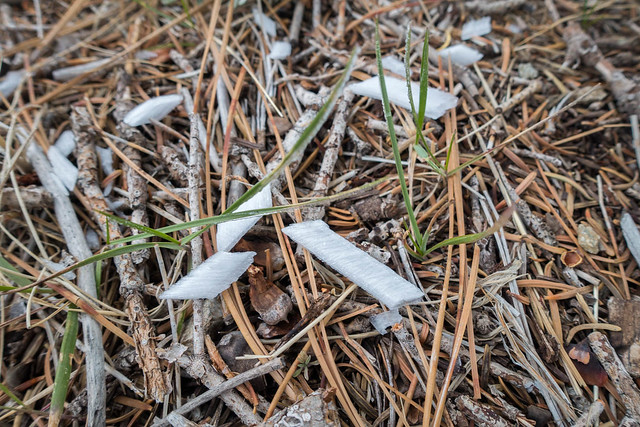 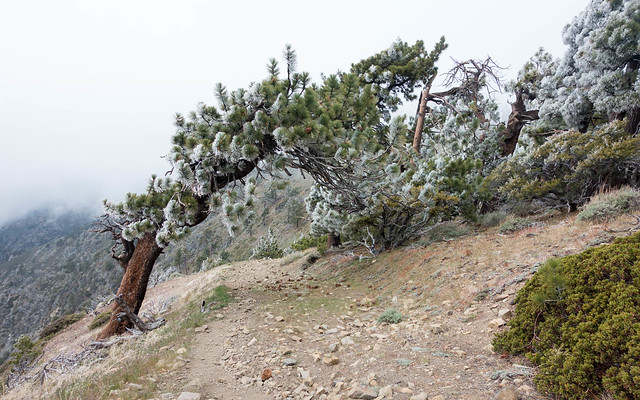 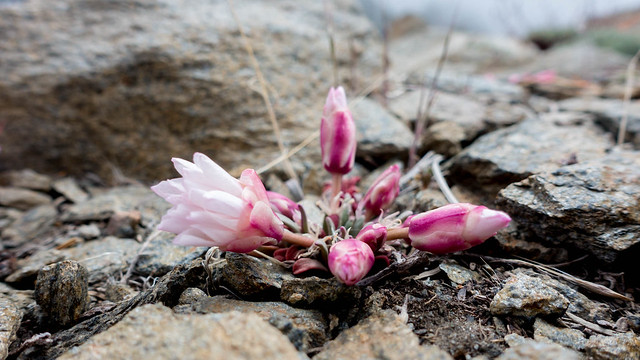 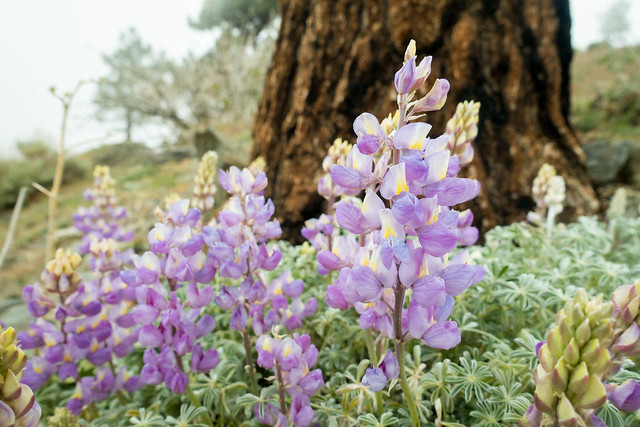 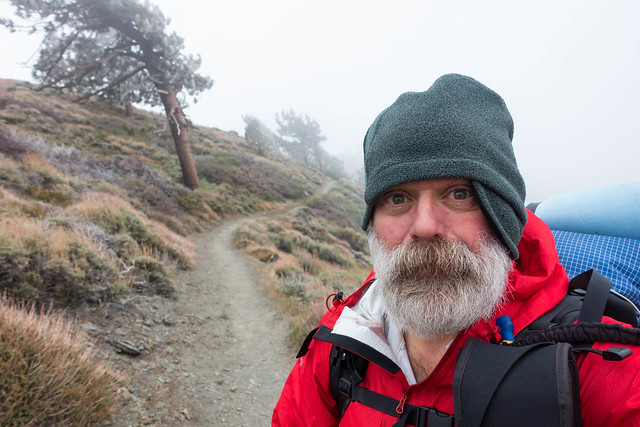 I was feeling fine and made the road and Inspiration Point pullout right around 10:30 and wondered if there'd be any traffic. Some motorcycles passed me by--what a horribly cold and dangerous day for a ride--and as I started digging in my pack for my down jacket, a guy in a white Toyota truck said "howdy--throw your pack in the back. Any others behind you? You all need to get off this ridge quickly" Oh, yeah, I agree. The wind had picked up to 25mph and the fog had reduced visiblity to maybe 300 feet, a gray half-dome on all sides.

I was pretty sure there wasn't anyone behind me, we waited ten minute or so, and then Brett the driver thankfully drove me the five miles or so down into Wrightwood. It was sunny and calm and even a bit warm, children were playing in the park across the street from my motel, very much not the weather just a few miles up the road; though you could look on the ridgeline south of town and see the fog blowing over and dissipating as it came down the slopes. 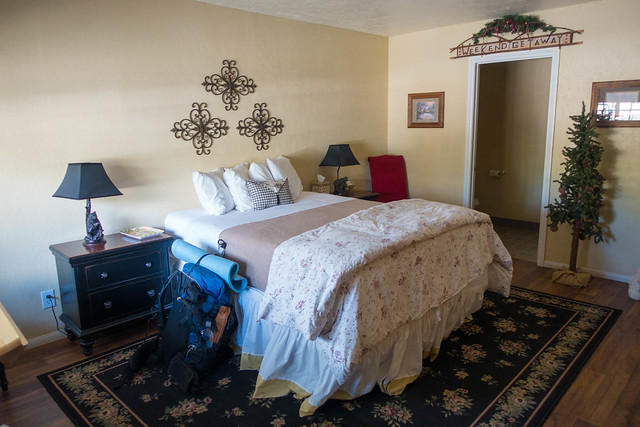 And it was just noon, time to get a shower and find lunch. I walked over to the Daily Grind for soup and sandwich--mmm, homemade minestrone and ravioli soup, a turkey/swiss/avocado toasted sandwich--wrote a bit, then figured out some options for the next few days. The weather forecast was indeed for a craptastic day tomorrow (Friday), snow showers and probably thunder/lightning with the unstable air, and a winter weather warning for the mountains was being considered, maybe 2 to 4 inches of snow at the higher elevations above 6000 feet. Saturday should be clear and cool; Sunday and Monday would see nice warming. 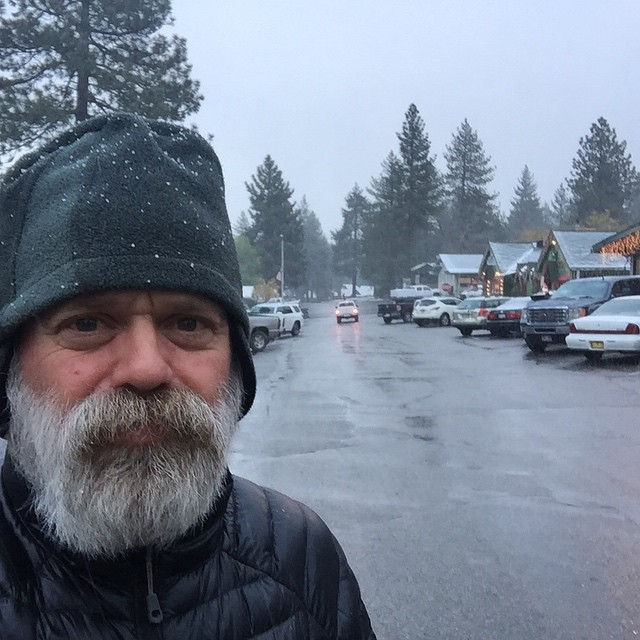 OK, then, there's a plan. Stay in town tomorrow (Friday), head out on Saturday. I napped a bit, rinsed out some dirty clothes, then headed over to the Yodler bar around 6:30. It was packed with hikers and a pretty good live band; Devin bought me a couple of beers then I grabbed a pizza. Now while I've felt lonely a fair bit on the trail and wished there were more folks to socialize with, but I was feeling all awkward, kind of isolated. All the other hikers were in little groups, like cliques in the high school cafeteria, they all seemed to know each other and had no idea who the scruffy near-homeless looking guy was (i.e., me). Clumps of the other hikers would occasionally head out the front door for a 420 break (so not my thing), the skunky gusts blowing across the table every minute as the hikers rotated in and out. A couple of other hikers around my age--a guy from Bellingham, another guy from Kentucky sat down next to me and we chatted for a bit, which was great. Like high school, you've got to find your own crowd. 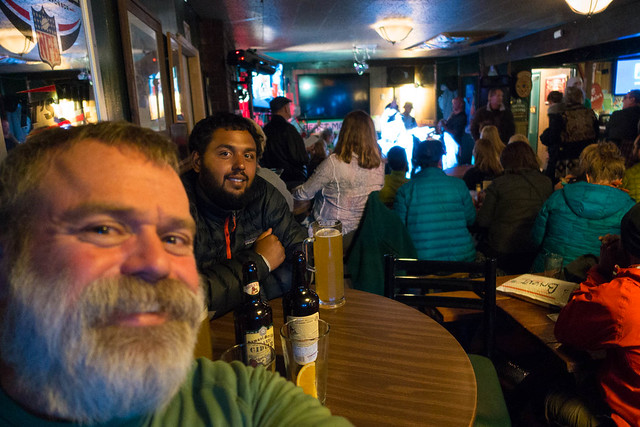 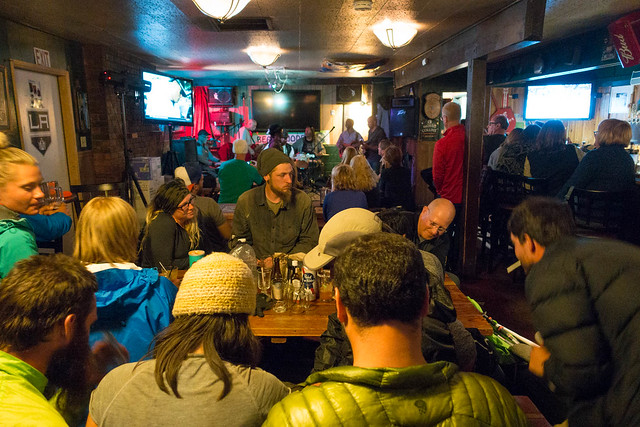 It was kind of early, just 8, but I felt like some alone time, so I headed back to the motel at 8 and wondered how I'd fill up tomorrow. More blog writing. More refreshing the weather forecast and discussion pages. And an omelette.

And indeed I did more planning--since I got off the trail at mile 370, the plan would be "camp around mile 390, then 410, then 430, then Acton KOA at 444, and I don't have to do 20 miles a day either with that shortish 14 mile day at the end, plus it's downhill." The miles from 373 west to around 384 are a concern, that's a lot of hiking above 8000 feet along the very edge of the ridge with a few inches of snow and very steep terrain. Maybe I'll detour around that section with a road walk? Hm.

I'm not quite so sure that I cam back to do this skipped section just to skip around within this section, though. Hmph indeed. OK, it's time to sleep on it, and figure things out tomorrow.

< Up from Cajon Pass Back to base >