Back on the trail. A slow start through dry country, ending on a green mountain.

I've certainly had more restful nights. Chris dropped me off at the Acton KOA around 9; we stopped and had Mexican food (my choice: chile en nogada, though cranberry substitued for pomegranate seeds and it worked.) I'm really into Mexican food right now; usually on these long hikes it's all about pizza but not this one.

Anyways, it was dark and there were half a dozen hikers around, chatting and finishing up pizza from a place they hitched to down the road.

I kinda just crashed over in a darker corner, away from the buzzing sodium and mercury lamps those RV parks love to leave on all night. And... that was a mistake. I did know my tent was about 50 feet from Soledad Canyon Road. I did not know that Soledad Canyon Road gets motorcycles and speedsters all night long, and the commute traffic starts right around 4.30. On the other side of the campground is a frieght and commuter train service, so those train horns blared when the road was quiet. I found my earplugs, but that really didn't help with the train horns. Finally, after a couple of good naps and lots of lying awake, I just decided to pack my pack and get out when it was light enough to walk, around 6am.

I scooted (as marmots do) out of that campground, across the Metrolink train tracks, and stared at the Golden Spike for a moment. It's a small monument commemorating the completion of the PCT in 1993, a small benchmark disk on a small obelisk. I kinda of thought the PCT would never be really finished, it's always getting adjustments, including a major rerouting in a few years through the Tejon Ranch. I'll be walking the soon-to-be-deprecated old path a few days from now into Tehachapi. 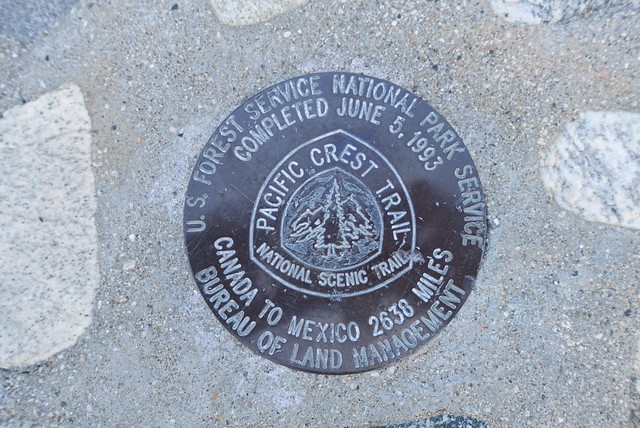 The trail wound north from the Acton KOA, heading into rounded, dry, drab hills, a place that looked like springtime never arrived at, criscrossed with dirt bike tracks and powerlines. 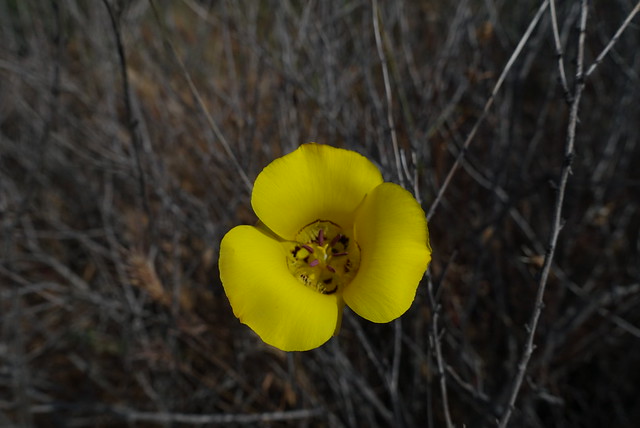 When I reached the top and headed down towards the 14 freeway I tried to guess a route on where the high-speed rail line from Palmdale to Burbank would go through this unappealing landscape. It'll likely require lots of bridges and tunnels and cuts and fill. 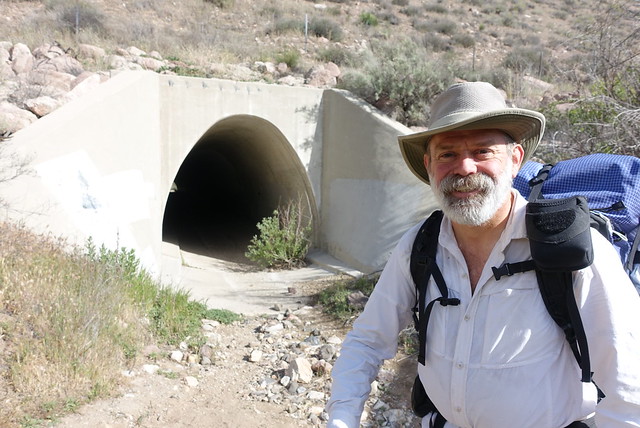 After paralleling the 14 at a respectful distance, the trail ducked down and under thre freeway through a drainage channel oddly shaped like the PCT shield, then emerged at Vasquez Rocks County Park. That was kind of spiffy, fun rock formations and the like, and I even spotted a king snake sunning itself, which isn't something you see everyday. 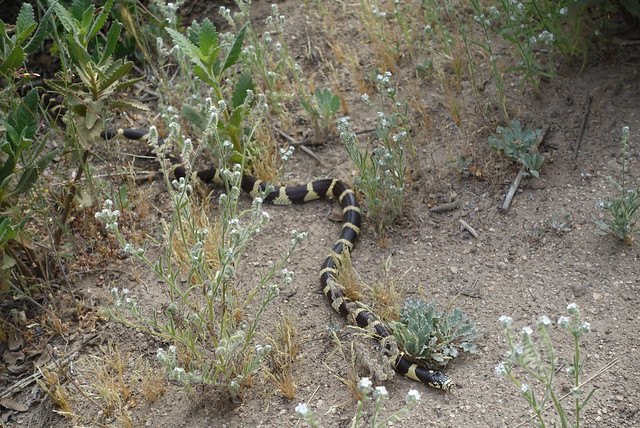 I remember those rocks as the place where Capt Kirk fought the Gorn, yet they make a cameo behind Wynona Ryde as some part of Vulcan. In real life, they're not really massive, and you can climb up the angled rocks in maybe five minutes. I took advantage of a picnic table to rest and call Mom (good seating is a luxury when you're out on the PCT, oh, and Hi Mom). It was a pretty good morning; I felt a bit rusty and slow but nothing at all was hurting--feet, legs, back, everything was feeling just fine.

Agua Dulce was my midday break. I normally don't eat lunch, I just snack all day, but today I knew there was (yes) Mexican food right next to Sweetwater Farms grocery. I shopped first--it's a great store, super-well stocked and I couldn't resist buying some of the more esoteric Clif Bar flavors, Banana Nut and Chocolate Fudge Almond.

Lunch was the taco-enchilada combo... and a margarita (though I should've had a Coke or a Sprite, sigh, it was just OK.) I did plow through the corn chips in about two minutes, then I declined more. I'm eating a lot quicker than I usually do, but I'm still not hungry at all. 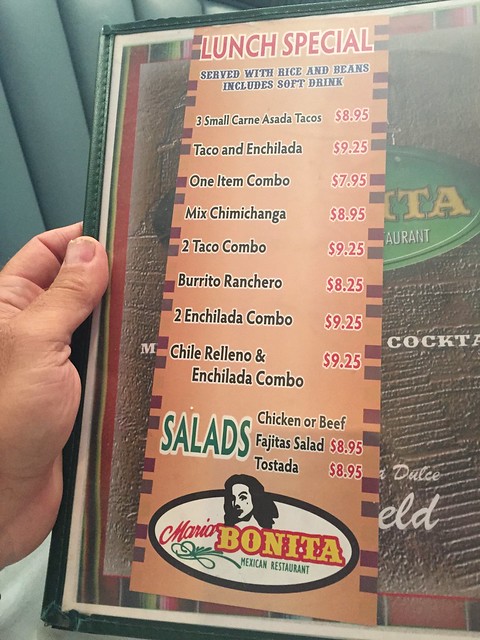 Mexican food is so tasty, m454

Agua Dulce is a small rural town, and the trail goes along the main road for a couple of miles, past horsey micro-estates, many with dogs that'll come up to the fenceline and bark and follow along until you go away, which you do of course, as you move on to the next ranchette with its barking dogs. All of those dogs must get smugly confident in their success in chasing away Big Hiker Man. 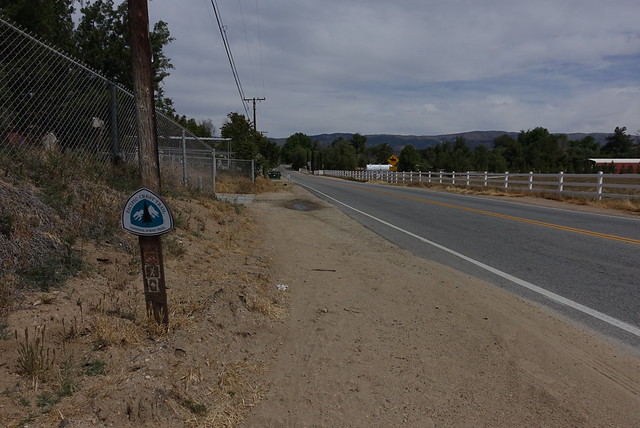 Those two or three miles of road walking were kinda painful; it's either sandy soil or crowned road surface, and neither is really enjoyable. I was glad to get past all of that, and onto a real trail that headed north towards a large brush covered mountain.

It was getting quite a bit warmer, in the mid 80s, and it was either that heat or the margarita or the new shoes or the road walking, I was just feeling a bit beat and I'd only hiked 12 miles. Not many places to stop as the trail skirted a movie ranch (complete with actual size passenger jet aircraft fuselage, hoisted up 20 feet in the air on greenscreen-colored scaffolding), and headed up a remote valley. Maybe the trail will skirt the mountain? I didn't feel like pulling up the maps.

Nope, the Pacific Crest Trail headed for the crest. Up and up and up, and now my right shin muscles are... sore? tight? They don't feel good at all, it's painful, but there's no place to stop its the side of the mountain. I'm figuring maybe it's walking a couple of miles on the slanted roadside, facing oncoming traffic, that made those muscles so sore, but who knows? 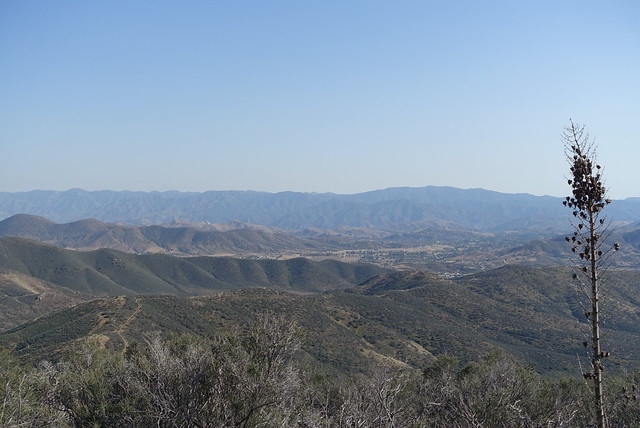 At 4 I take a break, and just decide to suck it up and keep going until I find a decent campsite. There's no way I can hobble six miles down to my 'planned' campsite near Boquet Canyon Road, but there should be some before Bear Spring in this flat area I can see on the topo. So I walk, slowly, on, counting steps to 100 and resting and seeing if those weird shin muscles respond to massage or ankle rotation stretches or anything. They don't, and the higher I go the windier and colder it gets. It's 50 degrees and there's 30mph wind from the south (which is nothing compared to the 30 degrees and 45mph wind some hikers put up with a few days ago on Angeles Crest, but I digress.) 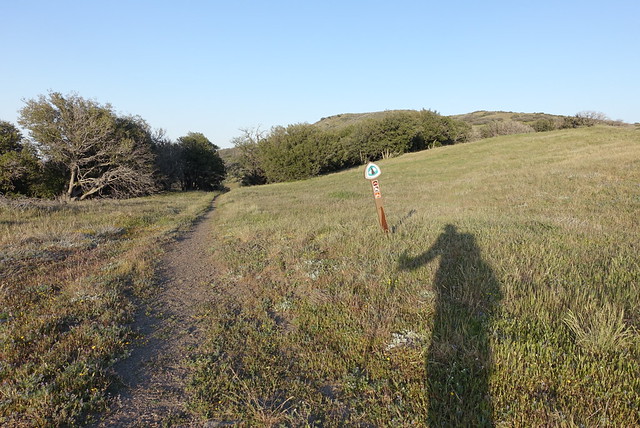 Maybe if I pop over that ridgeline onto the northern slopes, I'll find a campsite, out of the wind. That was my plan, and it worked with a surprise... once over the ridgeline onto the north-facing slopes, the vegetation changed from scrubby semi-desert to grassy oak groves. OK, sure, I'll take that! I found a campsite with a great view north towards Rosamond and Edwards AFB and called it a day. 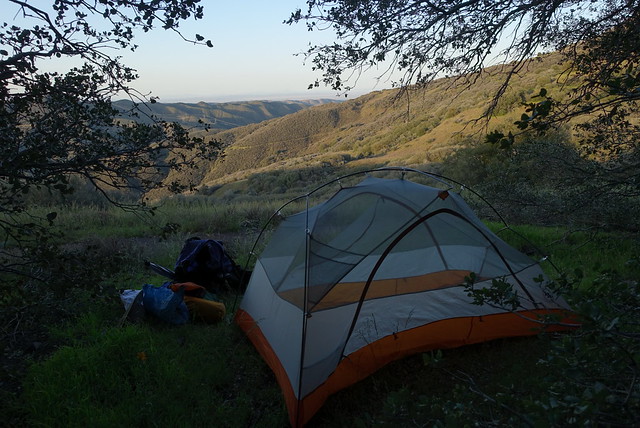 And, of course, my shin stopped hurting just as I was setting up the tent. These bodies we inhabit sure can be weird. I hope it's all right tomorrow, though I'm thinking I don't want to do an 11 mile road walk at all. We'll see in the morning.