I'm Itching to get back on the trail. I don't belong here at home.

It's very odd, this hiatus. The storm ended up being not quite so fearsome; I could've almost certainly made it to Wrightwood and stayed a couple of nights. Maybe I should've done that, ah well.

The last three days have been interesting; I have not wanted to get out of that trail mindset. After dropping the rental car off at the airport, I walked the three miles back home--it's so easy without a backpack, and it took just under an hour.

Once back home, I went upstairs to the laptop and sat down in my office chair to pull pictures off the camera card and IT FELT WRONG. It felt like I was at work, ugh, that's my work desk and it was such an ugly abrupt change. I drug the laptop down to the dining room table, next to my backpack, and that felt much better, like I was in some cabin somewhere and not at home. It's helped that Chris has rearranged the living room furniture so it'd didn't quite feel like home.

I've busied myself with updating my blog entries and looking at pictures and repacking my supply box for Kennedy Meadows. I did go out to lunch yesterday with Chris and the kid, who's growing up quickly. Geez, he's now seven months old and weighs over 20 pounds? Wow.

I've also done some strategizing on how to get back into it. I could pick up where I got off in Cajon Pass, which could be good... by the time I get up to the Angeles Crest, the snow and cold and wind should be gone. I could pick up the trail at mile 402, the last crossing of the Angeles Crest, or at Mill Creek Ranger Station, mile 419. Or I could just skip ahead and start up again at mile 444 at the Acton KOA.

After considering all of these choices, I decided to restart at the Acton KOA. It's still real cold in the mountains (Wrightwood at 5000' elevation had a low of 18 last night, and it's colder up there.) Highway 2 is closed due that rockslide for five miles, so there's not really an option to hitch around the high elevation section. There is the Manzanita Trail that branches off from the PCT, and stays at lower elevations, eventually rejoining the PCT somewhere before Acton. (Or I could just walk on the closed Highway 2 for five or ten miles or whatever it took.)

But thinking about it, it's easy to pick up that section later this year if I start at Cajon Pass next to I-15, and finish at the Acton KOA, about a dozen miles from the Via Princesa Metrolink train station. That sounds like a good way to unskip during more clement weather; it's about a six day walk.

Tonight after work Chris will drop me off at the Acton KOA, after picking up some replacement shoes at the REI in Northridge (a good way to use that 20% coupon and dividend, and my shoes have about 700 miles on them now since I used them for training hikes and trail running before starting the PCT.) I've repacked and added warmer clothes to my Kennedy Meadows resupply boxes--one has my ice ax and such, the other has my bear canister.

I'm thinking that the central Sierra is already experiencing mid-June weather, but there are definite occational cold snaps and late season storms I should be prepared for. Looking at some of the automated weather stations, like this one near Cottonwood Lakes (10,000 feet, mile 750), shows typical high temperatures around 50 and lows in the mid-20s, though the most recent storm yesterday dropped the low temperature to 11 with a high of 19.

Here are some recent temperature and precip maps for the last sixty days in the western US: 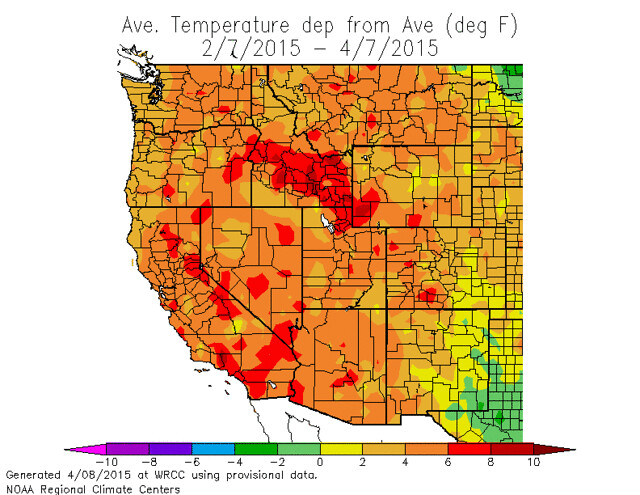 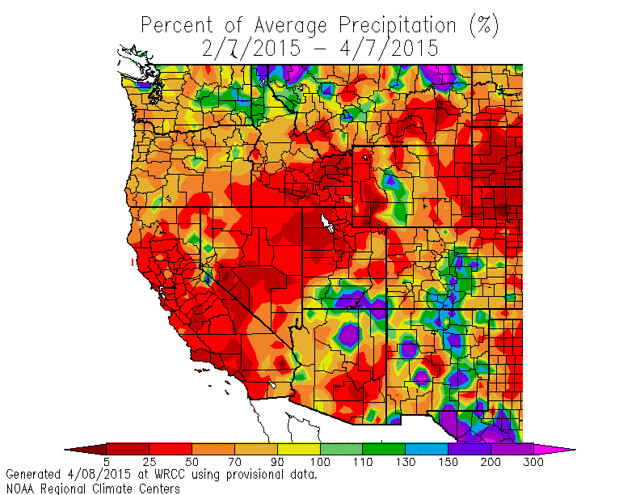 So it's unusual weather up there in the central Sierra. I should be prepared for what may come, so I'll send more stuff than I'll likely need to Kennedy Meadows and then decide then what to take and what to ship back home.