Hopped for several miles across Mission Creek, then uphill into the forest.

Well that was a pleasant night, so mild that I slept on top of the sleeping bag... though I had put up the tent, I would've just comboy camped if it weren't for the bugs. The campsite wasn't too far from Mission Creek, and there were little gnats and larger mosquito looking insects that would occasionally bother me.

The camp was somewhere around 3000' elevation, which was nice and warm but not chilly. Today I'd be hiking up to maybe 8000' or more, following Mission Creek uphill. The trail planners did a good job figuring out where to put the trail for maximum water availability--it just followed the creek into the mountains for ten miles, rising in elevation. I watched the plants change, from desert into scrub chaparral into a few scattered oaks, and took a midday break at the campsite around mile 236. 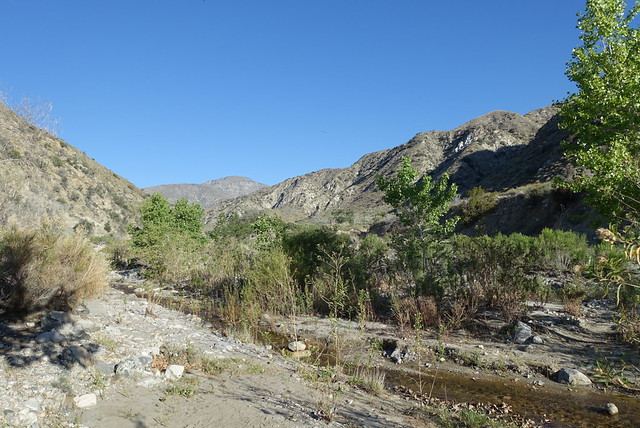 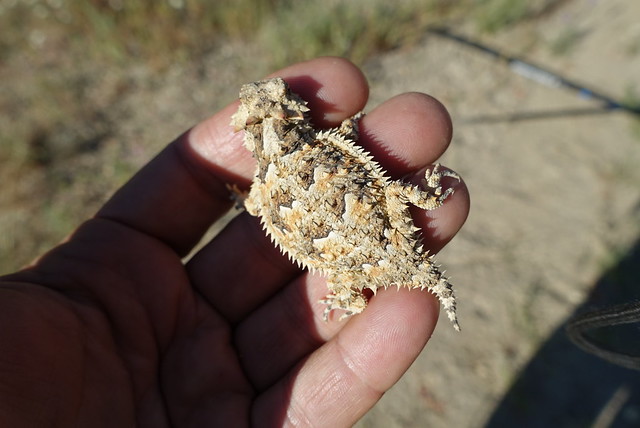 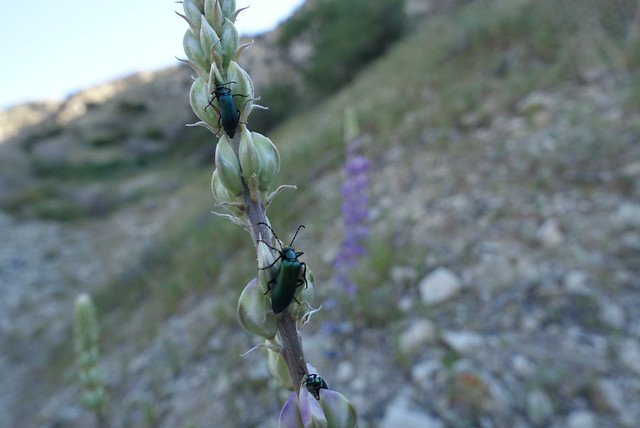 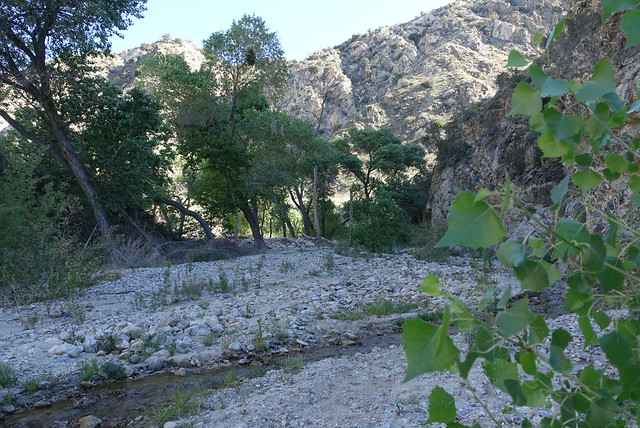 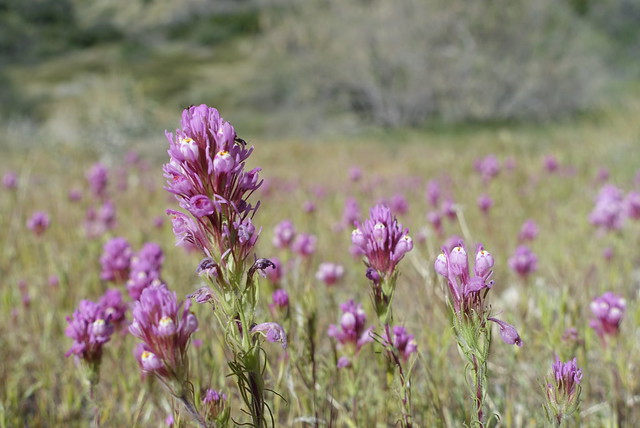 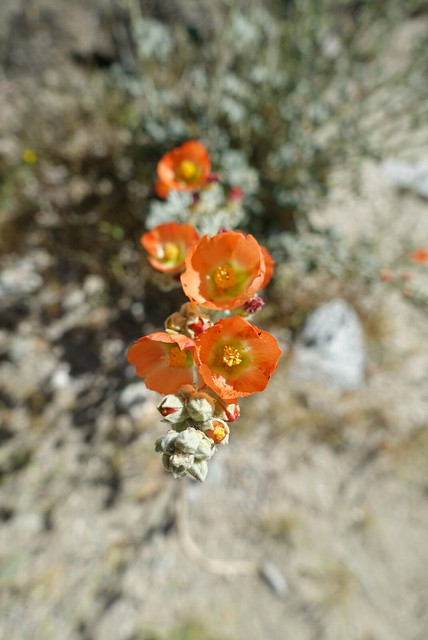 I was feeling pretty good; I had pulled out the Tricep Thrusters (my hiking poles) and while I really haven't hiked with poles ever before they've become my new favorite piece of equipment, powering me on the uphill bits and braking me on the downhill pieces. At that midday break I took a look at my toes. They're doing fine, the blisters are gone, and yesterday's soaking the hot tub down at the Palm Springs Motel 6 has made them feel quite a bit better. All of the dead skin around the blisters has been molded into shape and dried by the hot desert air into convenient ridged calluses, too--so convenient when your body figures things like that out for itself. 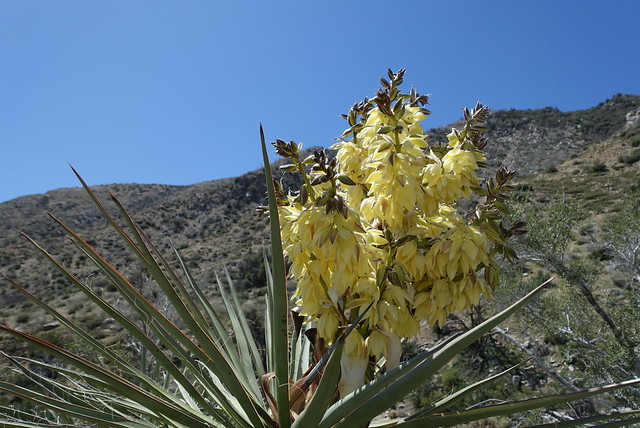 This also was a day where I thought I really wouldn't see or talk to anyone, and I didn't. There's no cell service, there's no one behind me (after I left Big Dog and Pink Panther at the Whitewater Reserve, mile 219), and I don't think there's anyone to overtake. I was just out there on my own, not looking at the clock or the mileage, just following the trail and looking at the lizards and the plants and feeling a strong connection to the landscape, a belonging, an attachment. I felt "embedded", for lack of a better term. It was hard to describe, it just felt right, and I knew how to get along with it and enjoy myself in it.

I found myself daydreaming a bit, and thinking back to all those questions on mailing lists and PCT Facebook groups. What about bears? Snakes? How much water should I carry? What about ticks? It's all just chatter, a low bandwidth communication channel, a way to express concerns with a bit of self-promotion (I'm guilty of that now and then) and doesn't even begin to convey all of the skills and techniques and such. I was pretty prepared, but I've already learned quite a bit from others on the trail and from just being out there.

It's not that I don't care, it's just that I can't be bothered. I'm really focused fully on things around me in the physical world that has sunrise and sunset, plants and animals, water sources and campsites and now and then a bit of shade... and feeling much more detached from that other more mundane world lived under florescent lighting, filled with status updates and Instagram food pictures and Twitter trends.

On my iPhone (a very handy tool, oddly enough, for the PCT), I've deleted the Facebook app, and just use the mobile web version with a bookmark for the PCT Class of 2105 group. I don't look at it much in the past few weeks. The folks worried about getting enough multivitamins and comparing emergency locator beacon service plans, well, that's just not important to me. As I said, chatter, and while I might have something to add to the conversation, they can figure it out themselves and find their own way. 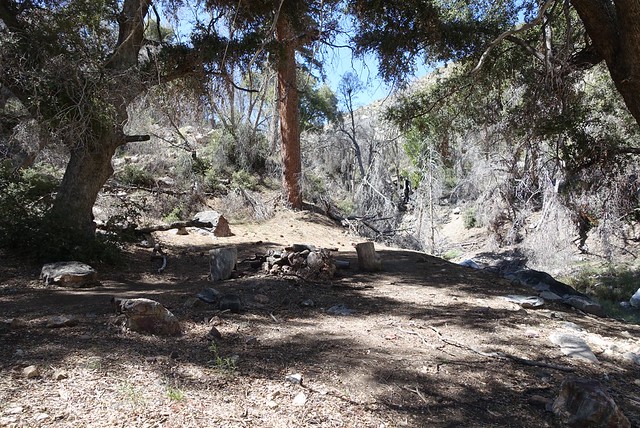 So... after finishing the midday break at mile 236 and making a couple of liters of water, I hauled the pack back on expecting a nice mellow climb into the forest. That wasn't what the trail planners decided on--the trail abruptly changed character and headed steeply uphill, gaining 2000 feet in four miles, topping off around 8000 feet. I hunted around for a water source, made a bit more water, and wondered how much more time I had to find a campsite. Looks like a saddle just past mile 243.5, so I headed for it after getting some water at the Misson Springs trail camp. 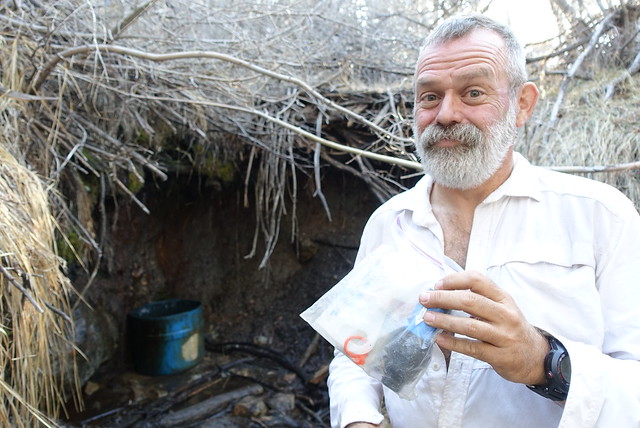 The plants had changed into a fine alpine forest, complete with incense cedar and pines and fir, with a sprinkling of manzanita and sagebrush as a reminder that you're still walking next to the arid desert. 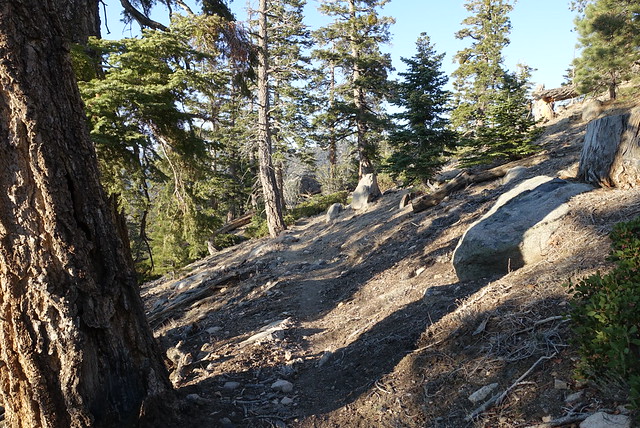 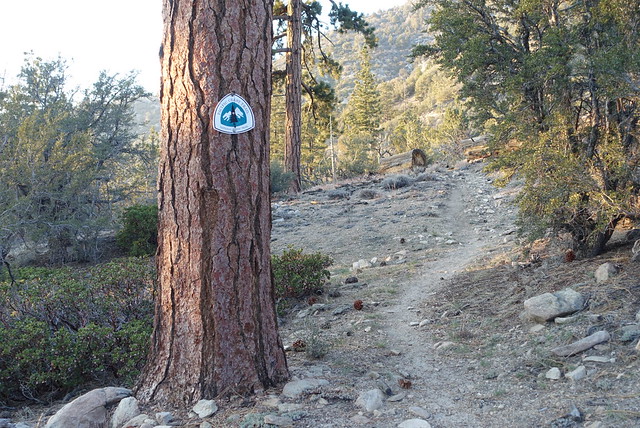 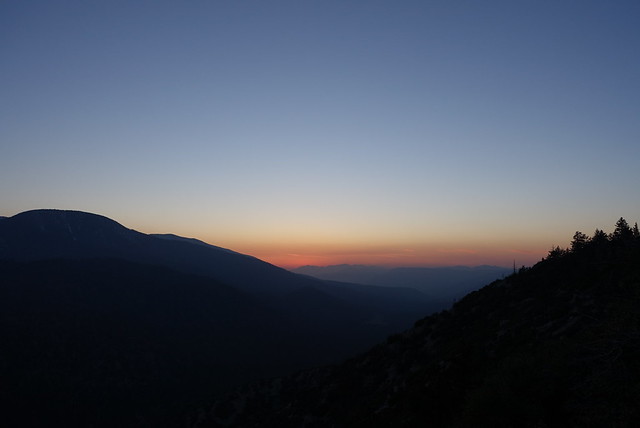 It was getting late in the day, and I was feeling more than a bit tired, watching the sun set over San Bernardino and the eastern bits of Los Angeles, the haze tinted orange and brown from smog that's still present but nothing like the horrible brown days of the 1970s and 80s. I was wondering if I'd find a campsite, it was getting dark, then a perfect little campsite appeared, sheltered from the west wind at the saddle. The tent went up quickly, I did more than a little blogging :-) which I'm finishing up right now, and then it's time for bed.