Hike across the mountain ridge east of Big Bear, then thumb a ride down to town.

Got up early today, and felt clear and lucid and frankly great--but I didn't want to loll about all morning. I decided to head into town for a nice warm cozy bed and a meal or two... the hiker hunger really hasn't kicked in, but I know I'm not eating quite enough and my weight is definitely dropping. I'm also starting to feel a bit lonely out here, the scenery is great but it'd be great to have someone to talk to at the campsite or just catch up at a rest break.

It's 22 miles to the road, but the trail generally stays around 8000 feet without significant up and down, and the last few miles it drops down to 7000 feet. That's more miles than I've walked so far, but I think I can do it, so I'm going to get going early and make it happen.

I packed up the tent pretty quickly, after a couple of weeks I've figured out where things are. I really love that tent--a Big Agnes Copper Spur UL2--and the six pockets inside. I put my eyeglasses and contacts in one of the lower pockets, the camera and phone in the other lower pocket, then put the keyboard in one of the dual upper pockets along with the solar charger and battery pack. Yep, I do have a keyboard, but not at the moment--the Bluetooth on my preferred keyboard stopped working a couple of days ago, so Amazon is shipping a replacement to tonight's destination, the hostel in Big Bear.

Keeping gear all organized has been a challenge. Where's my knife? The athletic tape for blisters? My gloves? I bought lightweight stuff sacks in different colors (Sea To Summit makes great ones that weigh around 20 grams), and consolidated things into four bags. The first is the food bag (an Oplok sack, so bears can't smell and rodents can't chew through). My clothing is in a 9 liter amber colored stuff sack, general stuff is in a 15 liter blue stuff sack, and I have an 'go bag' which is a 15 liter green sack.

It's the go bag that helps me get out of the tent more quickly than I used to. When it's time to get out of bed in the morning, things that are stored in the outside of the pack or I'll be wearing are put in the green "Go" bag--sunglasses, hats, camera Clif bars for the day, phone, knife (which has a little piece of reflective rope attached so I can find it), gloves if it's a cold morning, second pair of socks for switching out at midday. That way none of that stuff gets lost in the sleeping bag/pad/clothing that's usually strewn around the tent.

The other gear gets put in their color coded stuff sacks, and then put outside the tent. Finally, the only thing left inside the tent is my pack and the sleeping bag and pad. The sleeping bag gets shoved to the bottom of the pack (no stuff sack at all), the pad is rolled up and then folded in half and put in its little bag (it's a Thermarest NeoAir Lite). I pick up the tent and shake it out, then take down the poles and shove the tent into the pack on top of the sleeping bag (again, no sack).

Then I layer the other bags that have been sitting outside on the ground or my rain kilt (if the ground is wet or there's dew). Food is first, it's heavy. Then clothes in the amber bag, then camping gear in the blue bag, then stove inside its pot, then my "cooking/rehydration" pot (a Ziploc Twist-and-Lock quart container) with my mug inside. The Platypus goes horizontally on top of all of this, if I'm using it.

I then dig into the green Go bag and put stuff around the pack--camera on a shoulder strap loop, phone and snacks in hip belt pockets, and shove the Go bag with socks into the outside mesh pocket of the pack (I love my pack; a ULA Catalyst.) Smartwater bottles go in the outer side pockets. Finally, I take off my down jacket, shove it into the pack at the very top of everything, close up the pack, and I'm good to go.

This all sounds like an awful lot, but it's about 15 minutes of work, if that.

Anyways, the trail this morning was fine, looping around at 8500 feet elevation on the north side of a ridge through small snow patches and coming out high above the eastern slopes with a great view down towards Palm Springs and the Coachella Valley and the Salton Sea way far off in the distance. To the south was the back (north) side of San Gorgonio, the highest spot in southern California at 11,503 feet elevation, and the trail generally wound through dry conifer forest with some really big old trees; there doesn't look like there's been any wildfires in this area for decades. The incense cedars were so large they could've been mistaken for baby sequoia trees. (cedars and redwoods and sequoias are closely related and members of the cypress plant family, for what it's worth...) 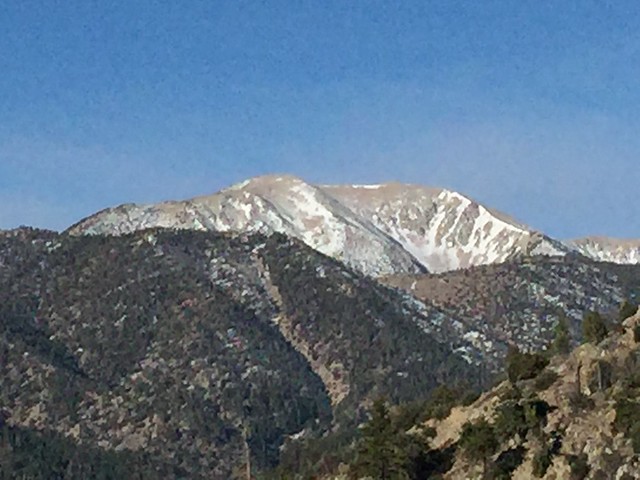 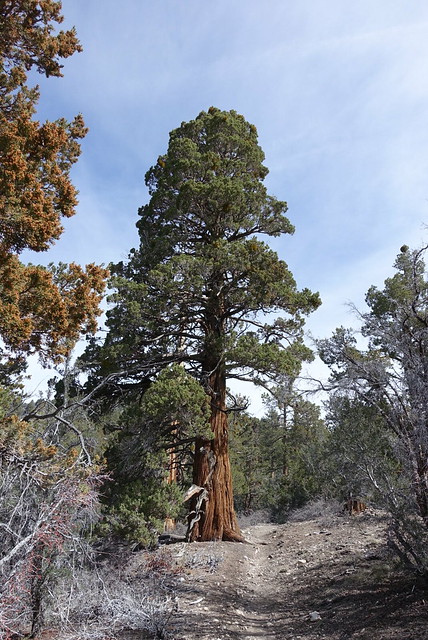 After six miles the PCT passed a few feet by the animal cages of Predators in Action, a company that specializes in exotic animals for studio productions--we are near Hollywood after all. Not many animals were in their enclosures (maybe they're on set for the day), but I saw a bear eating breakfast and a trainer teaching another bear how to stand up. I gave him the thumbs up and kept walking on.

The PCT after the animal cages was a bit confusing, as it joined dirt roads then after a minute or ten of walking it'd depart the road. Generally these exits were marked, but I missed one and after walking 300 meters of so down some dirt road I wondered "where are all the footprints and trekking pole holes?" and realized I wasn't on the PCT anymore. I backed up and sure enough I'd missed the sign, kind of hidden behind a manzanita bush. There was some trail magic just beyond that, and I enjoyed another Shasta Cola. Thanks, Papa Smurf. 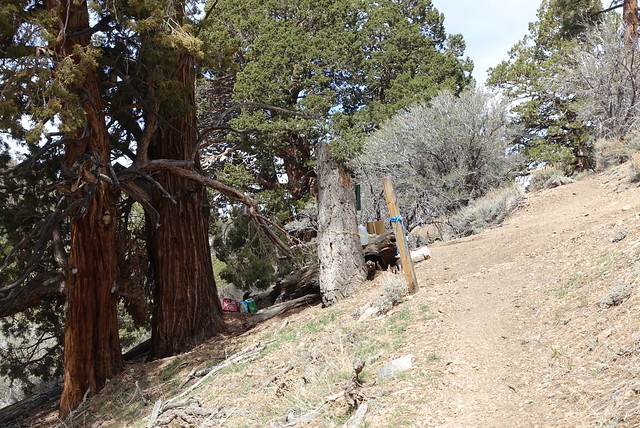 At mile 256 I filled up with water at the Arrestre spring; first water in 16 miles. I had carried 4 liters but only used about 3--the temperatures were cool and the trail mostly shaded, so I just made one new liter so I'd have two liters for the remaining 10 miles to Highway 18. 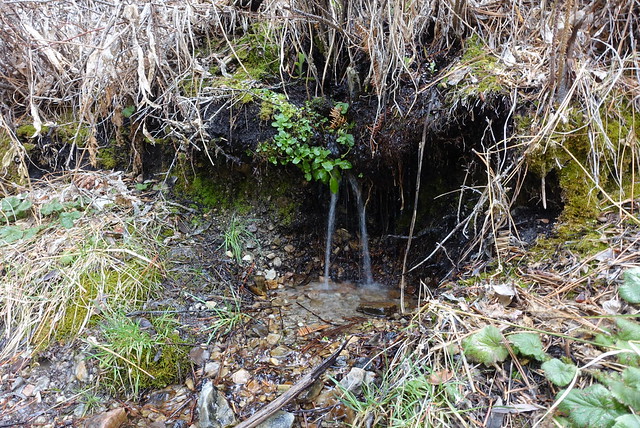 I checked my feet, and how the new Injinji Trail 2.0 toe socks were working out. Not so good--the thicker fabric bunched up under my toes, leading to an ugly and semi-painful blister on my left foot, so I reverted to the Injinji Running 2.0 toe socks. Much better. 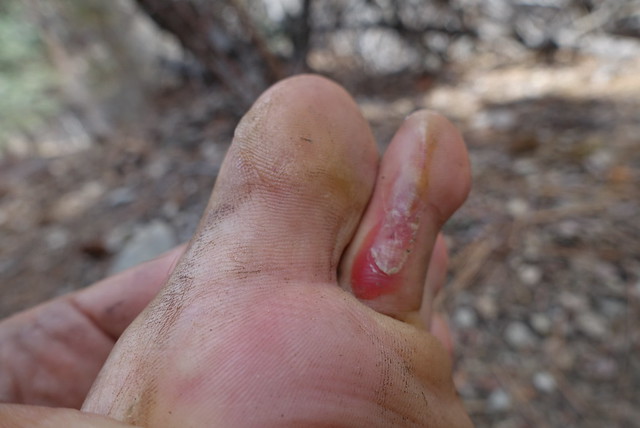 That last bit to the highway was pretty easy and a bit windy; the trail came out of the forest into high desert sagebrush and pinyon and the first Joshua trees on the trail. Definitely Mojave desert landscape, and a mini-preview of the dry and dreaded Section F north of Tehachapi. I was amused to see Mormon Tea growing (Ephedra nevadensis), and remembered my Boy Scout days: for the Wilderness Survival merit badge, we made tea from it, it was stimulating :-) 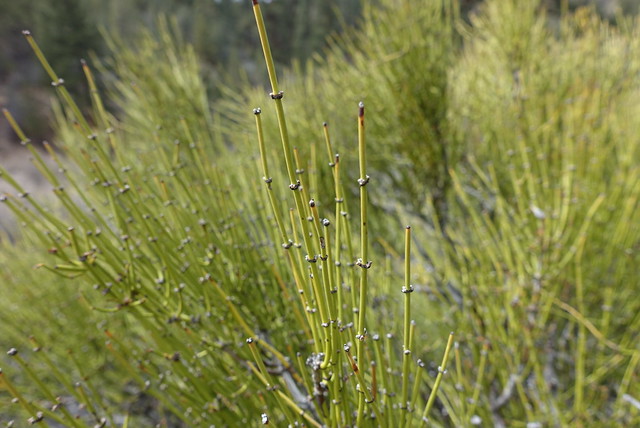 The terrain was generally rolling to downhill, and I made good time to Highway 18--though I was annoyed by the few loose rockfields the trail crossed. Walking across the rocks wasn't difficult but I had to be careful of my footing, and the rocks made that fingernails-on-chalkboard screeching as they rubbed on each other, giving me goosebumps.

There were a few flowers and good desert views, so even though it was a bit windy and cool it was pleasnt. 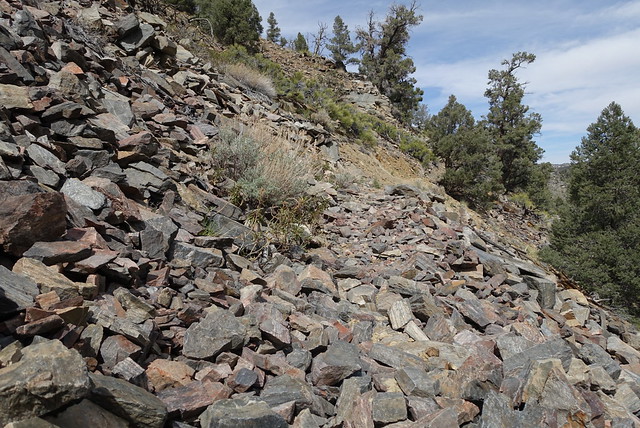 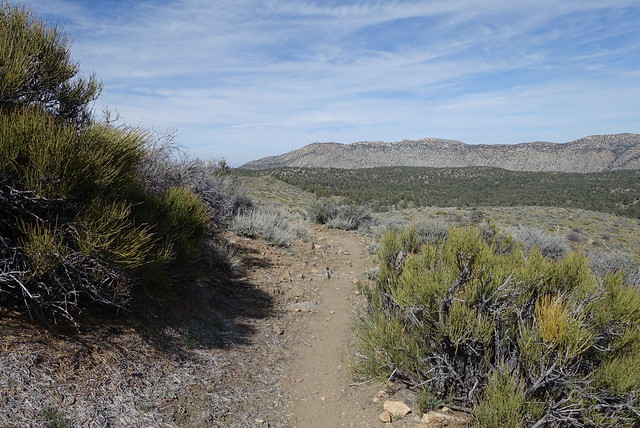 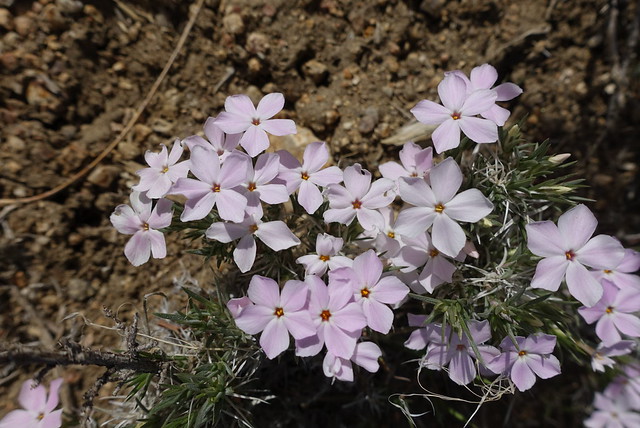 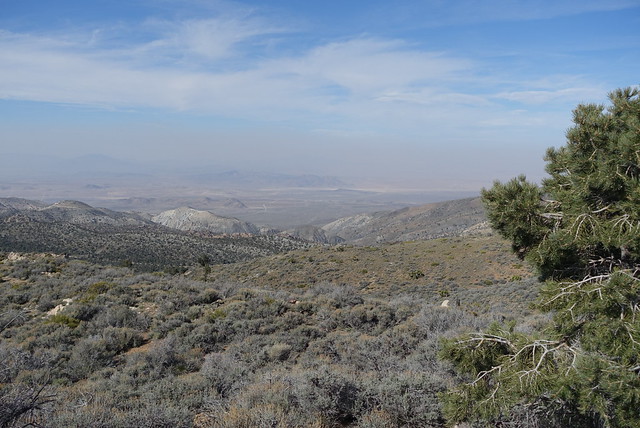 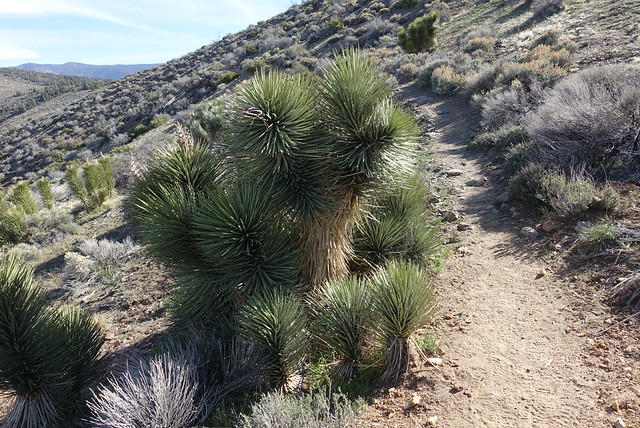 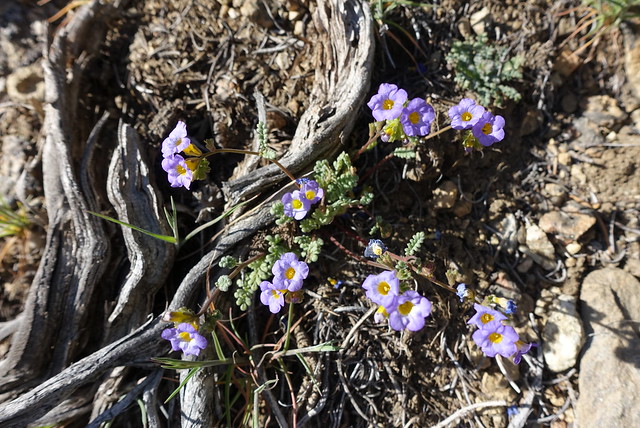 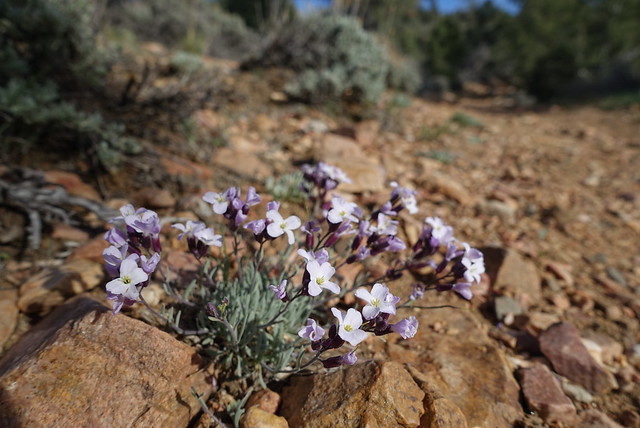 At the highway, I crossed and stuck out my thumb, and the fourth or sixth vehicle pulled over. I threw my pack in the back, the old-timer took me straight to the hostel and chatted about the great times he had hiking the John Muir Trail in the late 60's and how packs were so much smaller and lighter these days. Apart from the animal trainer, he was the first person I'd seen in two days, and certainly the first person I'd spoken with.

I checked into the hostel with Sarge the manager, chatted a bit with other thru-hikers Samson and Days Late, and walked over to the Big Five for a new fuel canister.

On the way back, I stopped in for a burger and (two) beers at Sandy's Sports Bar. Yum. Calories good! And then I started to write a bit with my new replacement keyboard from Amazon... but I fell asleep with the lights on :-) I'm going to take it slow in the morning, and get back on the trail in the afternoon.