Visited the beautiful Whitewater Preserve, then decide to really escape the heat and run for the hills.

After a delicious and caloric breakfast at Elmers, Chris dropped me off at Railroad Ave right were he picked me up, at mile 209.48. It was only 8am, but already 80 degrees, and after our goodbyes I headed north under I-10 towards the mountains. 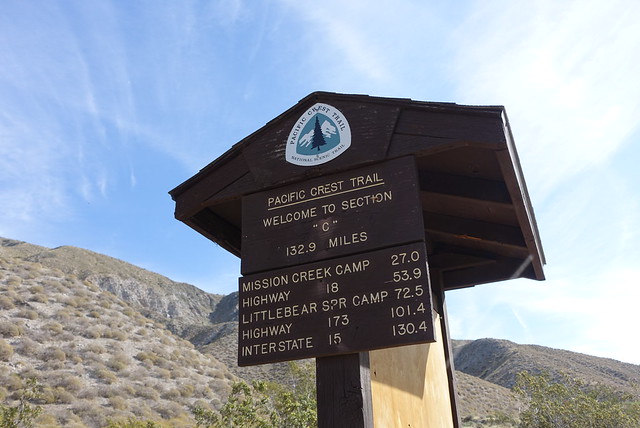 I decided to skip Ziggy & The Bear, it being 8am on a Sunday, and put up the umbrella and headed for the hills. I wanted to get at least 1000 feet higher--and 5 degrees cooler, and I thought I'd stop at the Whitewater Preserve for lunch and make it a short day.

So away I went, climbing up the alluvial fans into the Mesa wind farm. About twenty minutes into the hike, I almost stepped on a rattlesnake (#4), but it coiled up and I backed up and circled around it.

I was feeling good, well rested, and happy after the day in Palm Springs and the visit with Chris. The feet are settling down; none of the toe bits hurt like they had over the past few days--at one point somewhere near Anza (mile 144) I said "gee, why don't I just amputate my little toes? They're such a literal pain, and I wouldn't miss them." They're fine and happy, but three new blisters around my heels are making me tiptoe more than I should. Oh well, it's all transient (like me), they'll harden up soon enough. 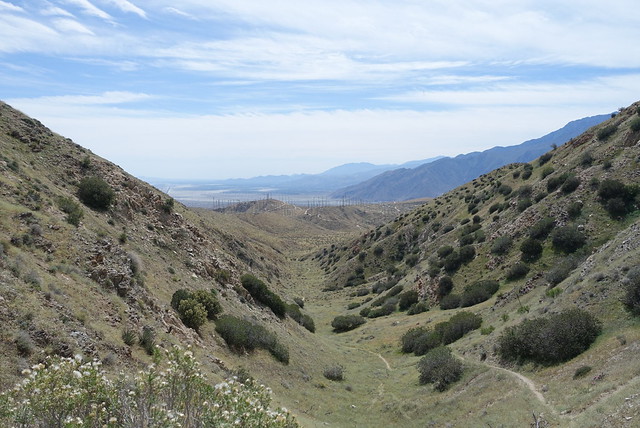 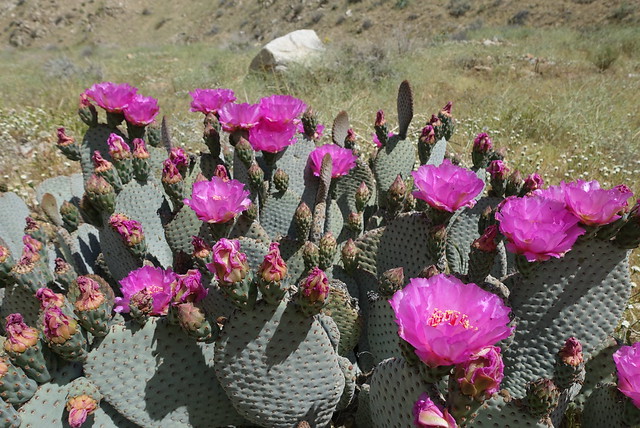 As the trail headed through the wind farm, it was oddly quiet without as much of a whisper of a breeze down in the canyon below the turbines up on the hills. Most of the turbines were still, except for maybe one out of ten, and they combined to make this woeful odd beat frequency that sounded like a dying mourning dove; a curious ambient soundtrack. The temperature climbed into the low 90's, but I was cool in the shade of my umbrella and was humming some instrumental nuevo tango earworm that fit the landscape and my mood ("Queremos Paz", if you're really that curious. ) 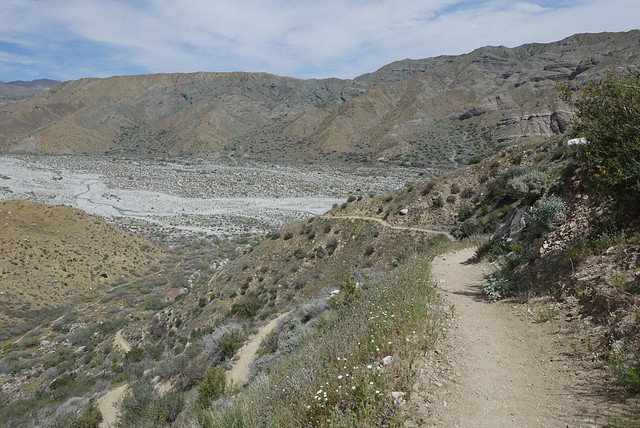 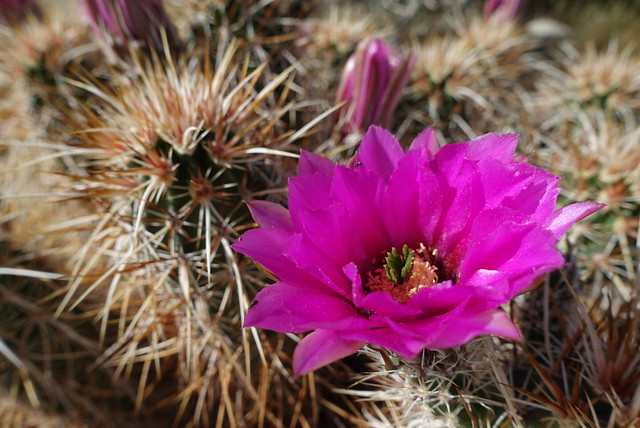 After the wind farm, the trail worked its way up and over a narrow gap and crossed broad grassy hillsides before decending down to the Whitewater Preserve. I was looking forward to the lushness and a cool shady campsite at the preserve after 8 easy miles. 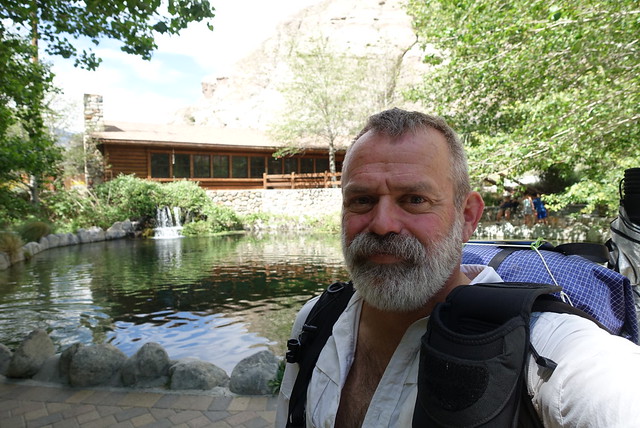 And the preserve was a beautiful oasis... and pretty crowded. It was a Sunday, and there were heaps of families were picnicking and splashing in a little wading pool and sprawling out across the tables under the leafy green sycamores. It was a really well-kept place; I wandered into the visitor center and found Pink Panther and Big Dog.

Big Dog wasn't doing so well--bad tummy ache and he threw up a bit down the trail, and Pink Panther had raced ahead to get a bit of help. He guessed he had probably eaten something bad out of a hiker box, like a chicken flavored MRE or something, and was paying the price. They set up camp in the far south reaches of the lawn; I joined them and we chatted for an hour or so.

Pink Panther was a hoot. She enviously eyed all the picnic food, and tried yogiing some watermelon: "Hi, I'm Teresa and I'm from Texas. That watermelon sure looks tasty. Want to be my friend?" It was greatly amusing to watch. She sure wanted some fried chicken, and went scouting a bit but came back empty handed.

I wasn't quite feeling like sticking around--hey, there's four hours of sunlight left!--so I said my goodbyes and kept on heading up the trail. It was pleasantly warm under the umbrella but not hot, my little thermometer read a pretty consistent 92 degrees and with the super low humidity and the breeze I felt cool and dry. 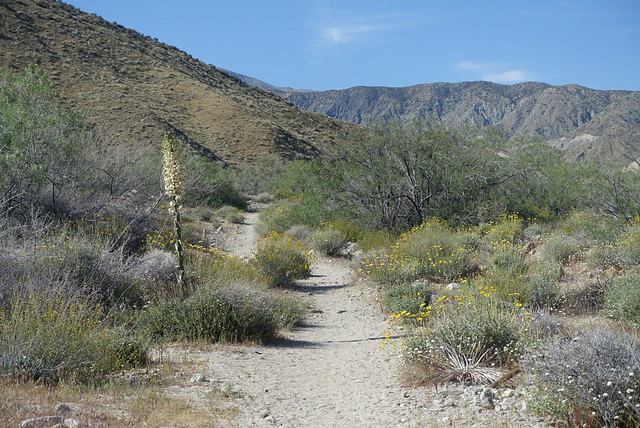 The trail worked its way up the broad river wash? valley? I'm not sure what to call it... then a couple of hours before sunset it headed up and across a ridgeline, rising to 3000 feet elevation and becoming pleasantly mild. The low angle of the sunlight and the shadows and the dry clear air made the scenery especially pretty, and after scampering across the ridge for a few miles the trail dropped me into Mission Creek, where I saw actual water, yay. 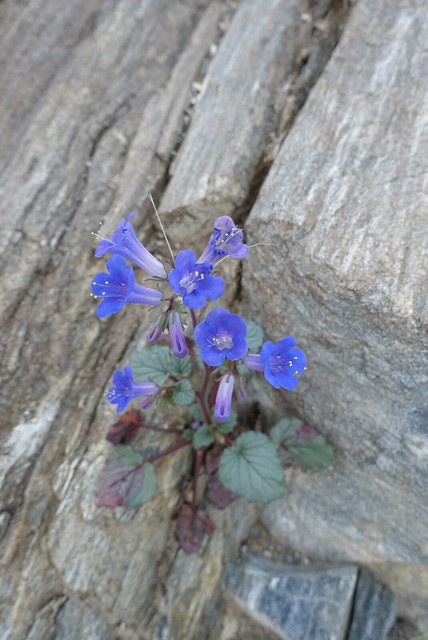 Phacelia in the rocks, m223 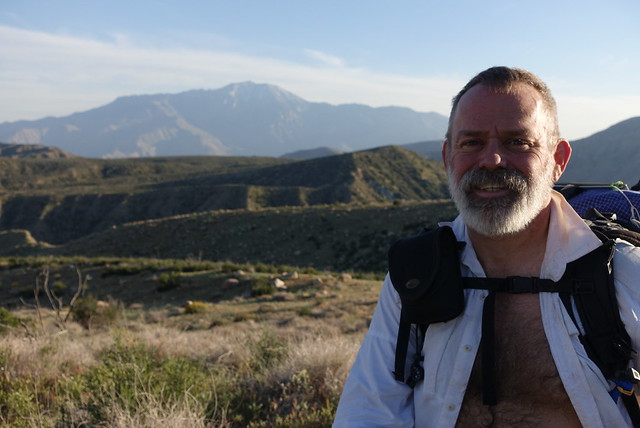 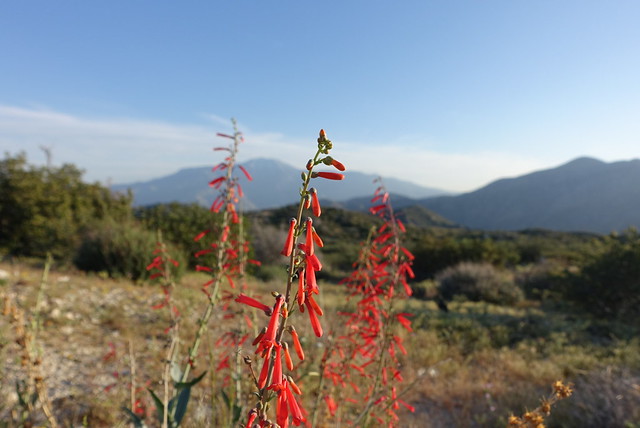 It was almost sunset, and from the ridge I couldn't see any tents, yay. Hiking and stopping right around sunset has a couple of benefits--you not only take full advantage of daylight, but you can place your camp where you want, avoiding or joining others as your mood fits. And while I sometimes wish there were more people on the trail to camp with, I also know that I get a better nights sleep when I'm not woken up by someone coughing or snoring or unzipping their tent in the middle of the night for a call of nature. Earplugs should probably be on anyone's PCT pack list--an item not found on most backpacker gear lists. 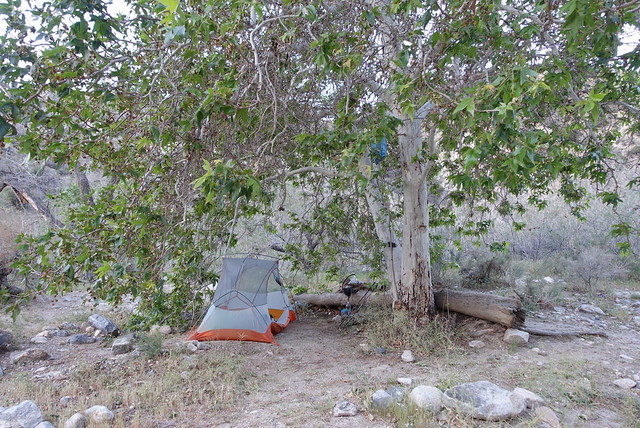 Right as the sunlight was fading, I found a good campsite under a cottonwood, then a minute further I found a great campsite under a sycamore at the creek crossing. It even came with a nice log seat with a backrest, courtesy of some forgotten flash flood. Time for dinner and sleep... and plan my water stops for the next day.