Since we’d skipped our night (and the soggy trudge) to Cabane Brunet, we had only a 4km walk this afternoon to Cabane Louvie... all uphill from the village of Fionnay. 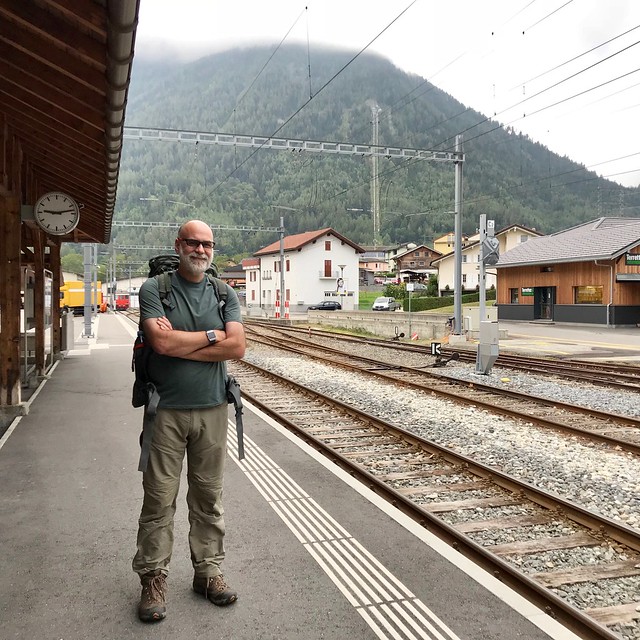 But Chris took another look and found an interesting hike option, up on a three gondola ride past Verbier and a 10km walk that drops down to the cabane. Sounds great, and it’s just two train rides and three gondolas away. The friendly ticket-taker at the gondola even mentioned that we could ride it for free since we were staying at the cabane, as long as we got a passcard from the tourist office. Score (and another 44 francs saved, the money just flows out of your pocket here.) 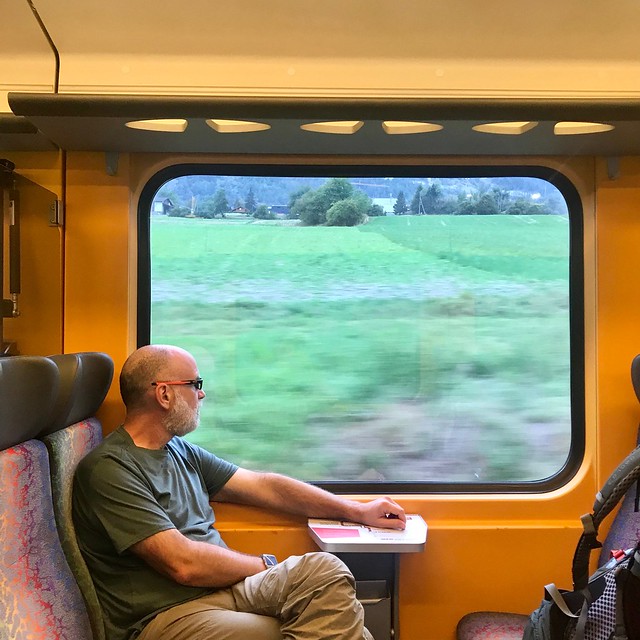 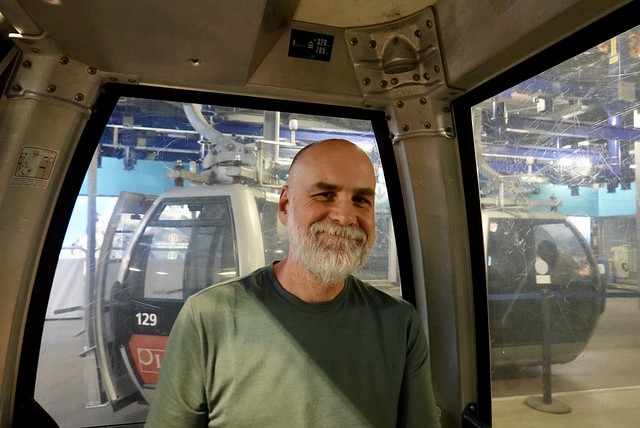 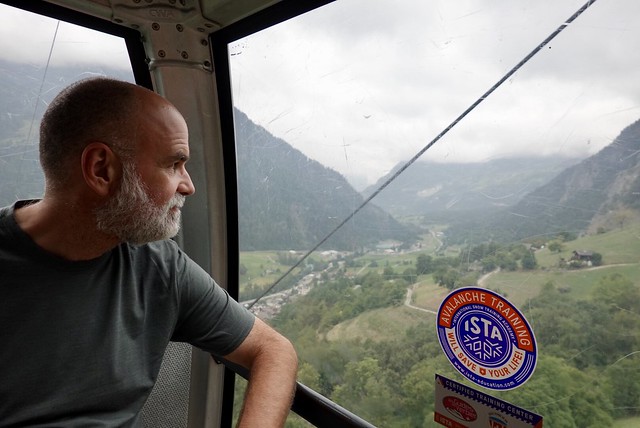 It was cloudy and gloomy as we started out, and that last gondola wasn’t open, drat, so we had another 2km walk that was mostly level through an art park. We did see a very beardy friendly chubby American looking hiker at the top of the lift and said “Howdy”. He said he was feeling a little sick so he took the gondola while his wife walked up from Verbier. Oh he has a wife. Drat.

That 2km bonus walk was fashioned as some “art park for the mountains”... sigh, but interesting, art for the folks that can afford to come here. I’m not sure what a “mountain art” genre would be anyway—would it be reflective of mountain residents like flowers and peaks and animals and lakes, or expressive of good times, usually some holiday break from urban/corporate life. 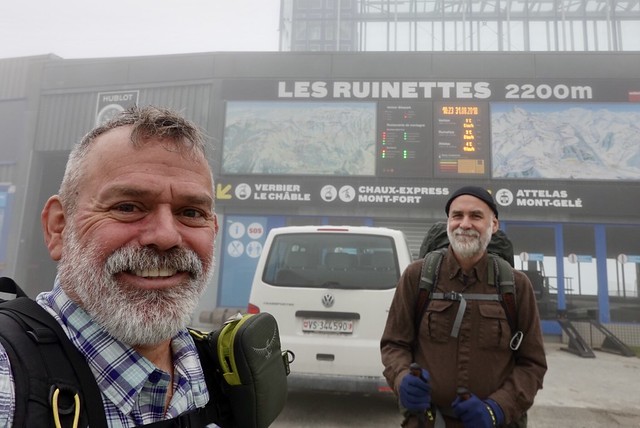 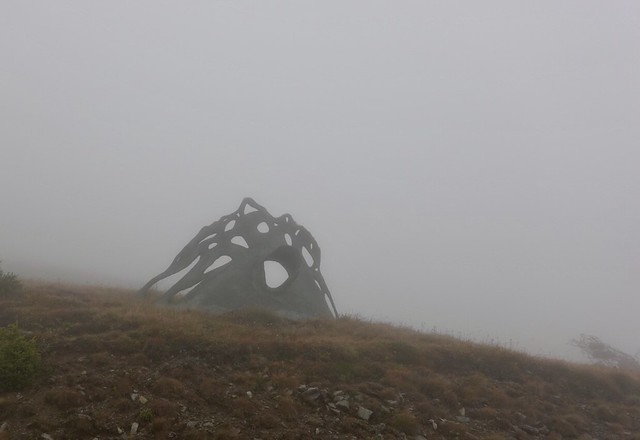 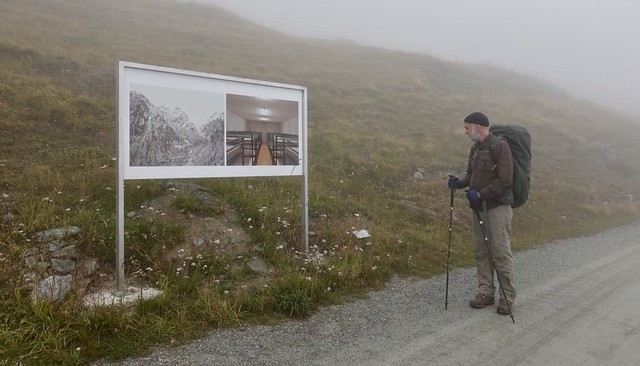 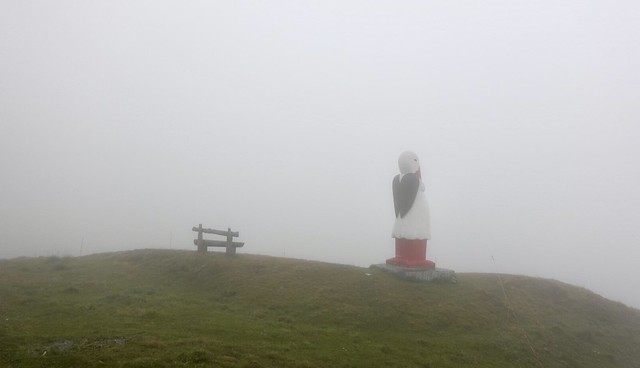 After the art park the trail just wound up and up, the mist obscuring all but a few meters around us. Supposedly the views to the west are incredible, we couldn’t see anything, and we finally attained the col and then headed down to the lake after three hours. There were a few interesting wildflowers and some patches of snow to cross, but not much else to see. 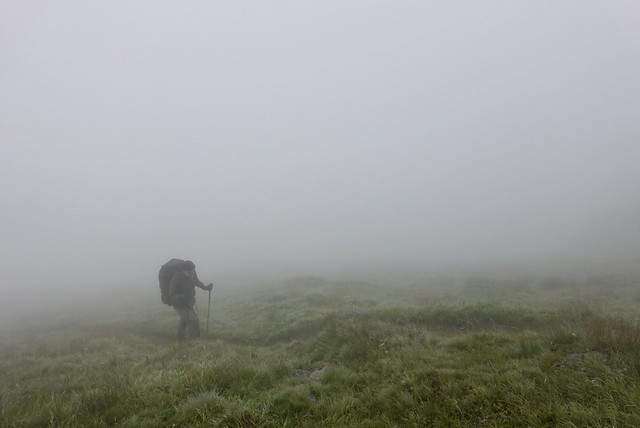 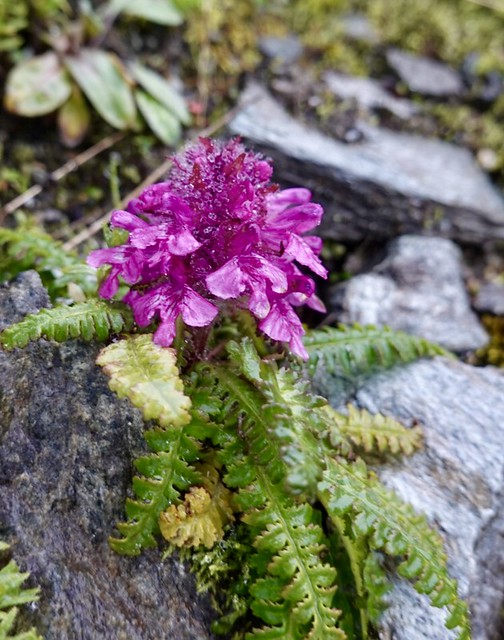 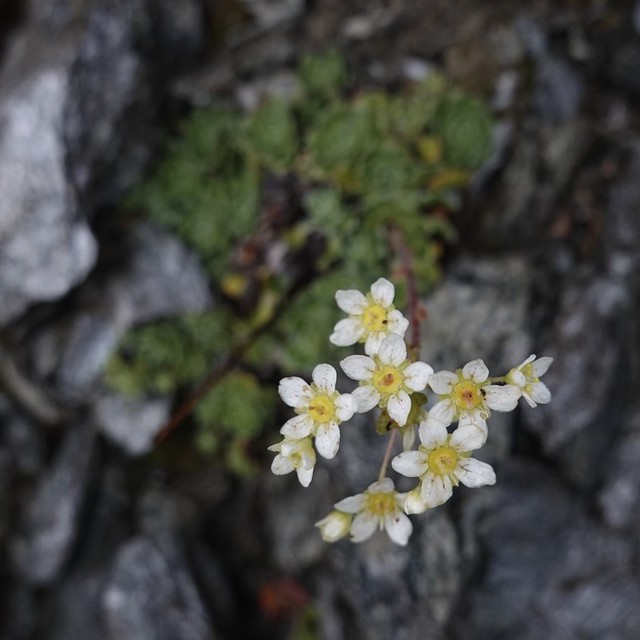 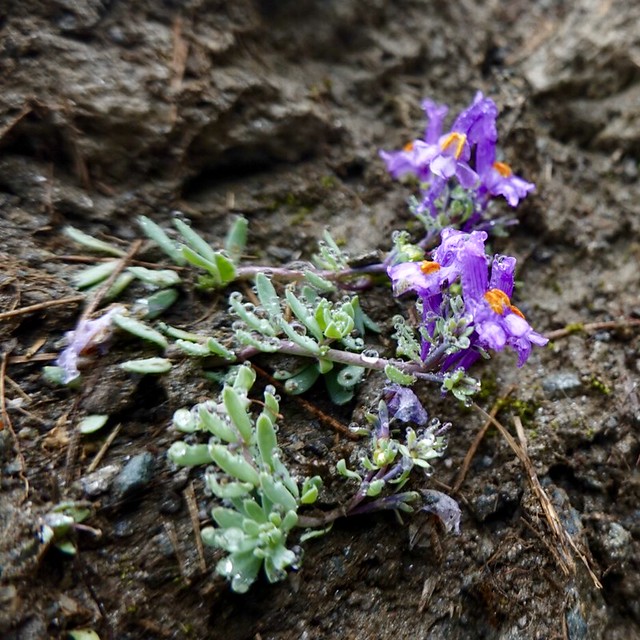 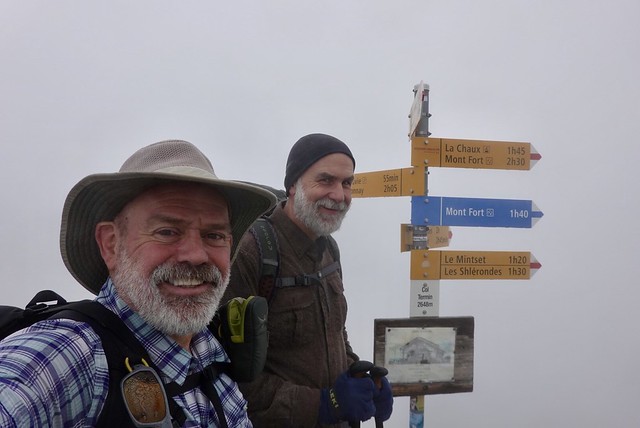 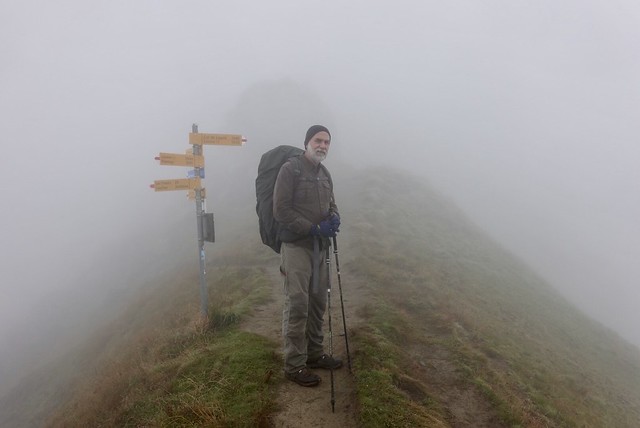 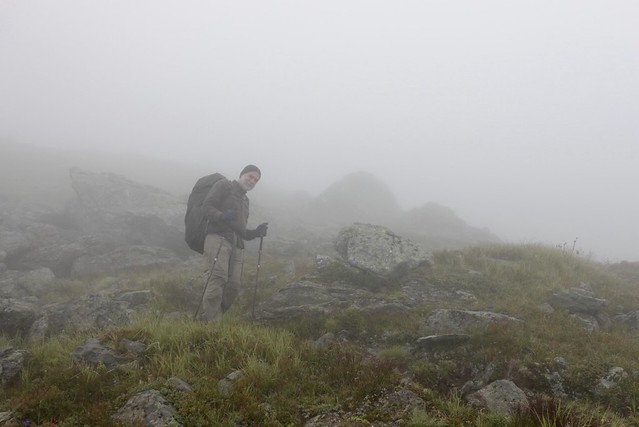 Down from the col 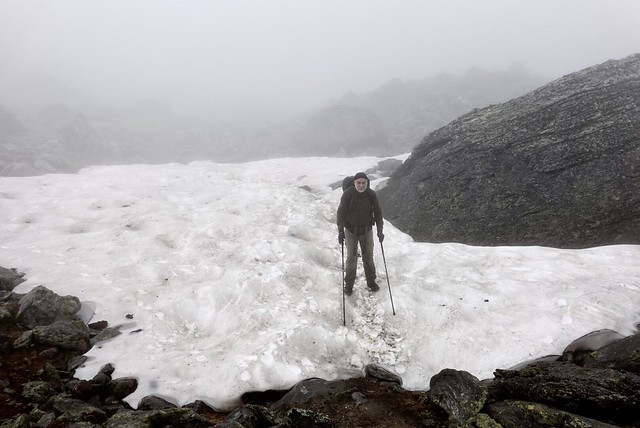 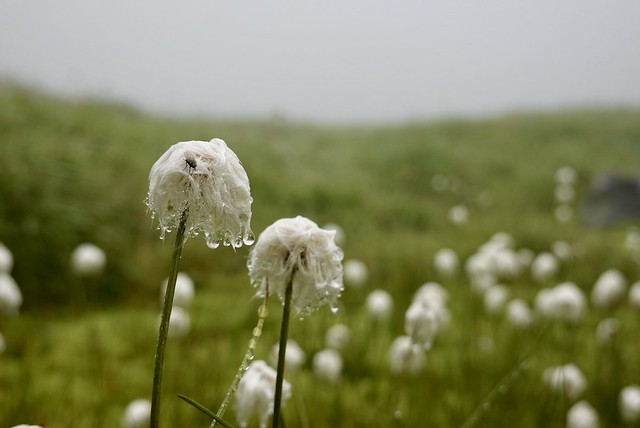 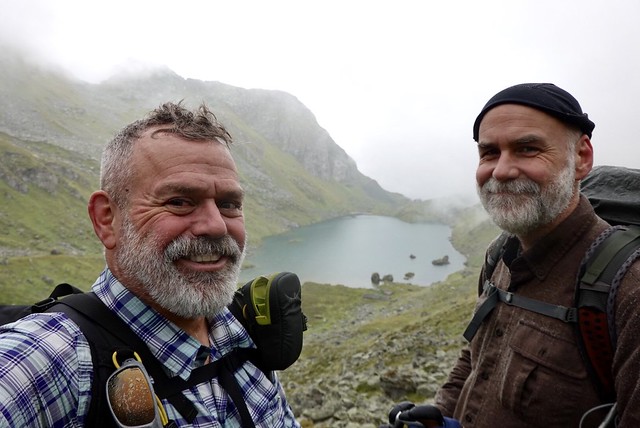 Lac Louvie, with the cabin on the fin at the far end

That last hour, though, was fantastic, we dropped down under the clouds and saw Lac Louvie in its steep valley, with marmots whistling on the hillsides, and even a herd of ibex lounging on the slopes, with a couple of bold individuals staring at us just a few meters off the trail. One particular ibex with a great pair of horns just sat there chewing the cud as I snapped pic after pic. 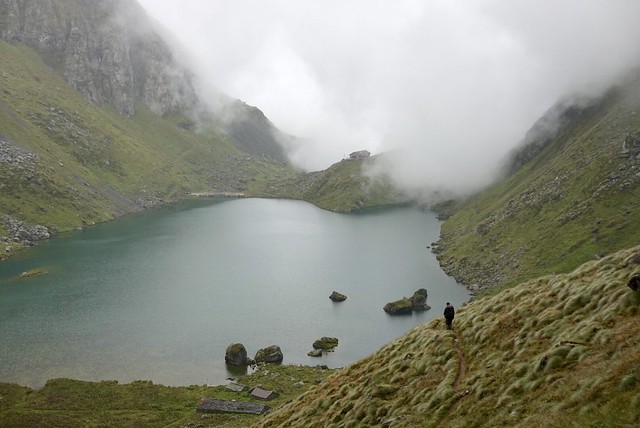 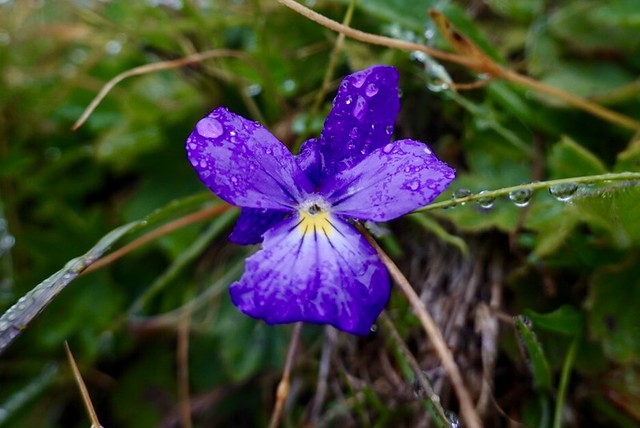 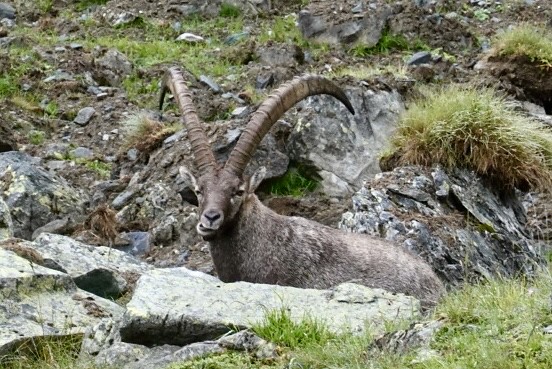 Bouquetin, or alpine ibex, near Lac Louvie, Switzerland. Not impressed with us turistas.

We made it to the Cabane Louvie, so cozy and warm, just as it started to dribble rain, yay, and set up our gear in our little room. We whiled away the afternoon with the cabin mates, making new friends as cocktail hour turned into dinner. One of the other cabin guests, Christophe/Larry Bird from Delft, is a PCT SOBO thru-hiker, so he and I had a lot to chat about. 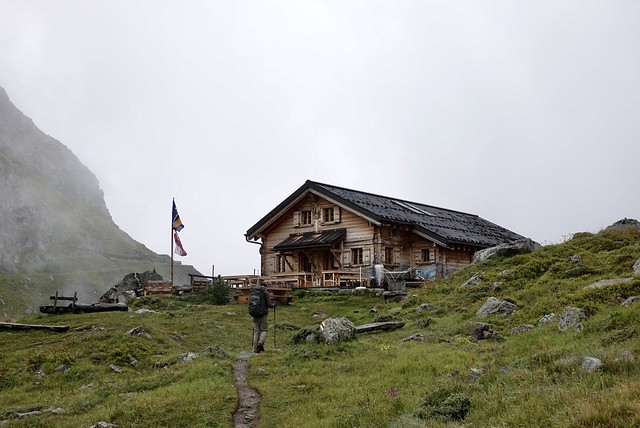 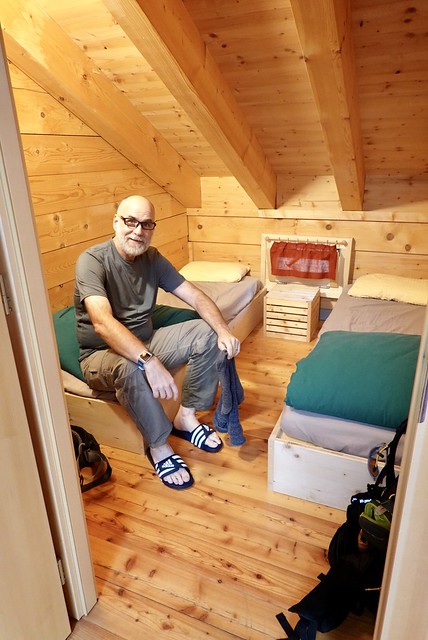 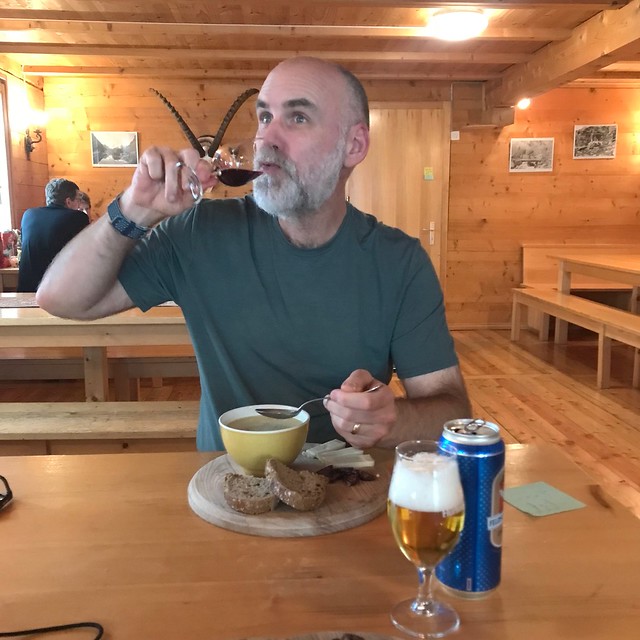 And of course we also enjoyed watching the cat, Chips. All in all, a day that started out not-so-great turning into a good time. 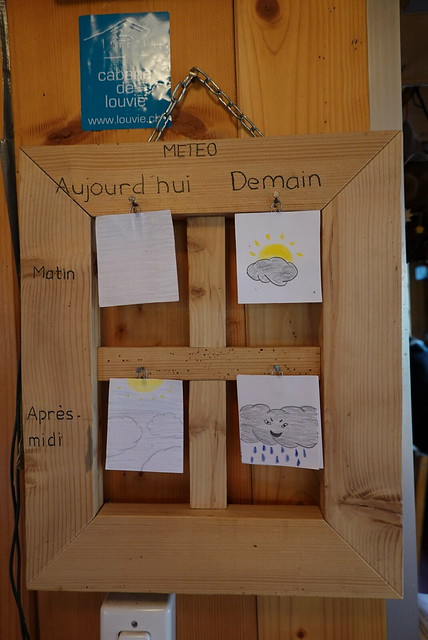 Weather not so good 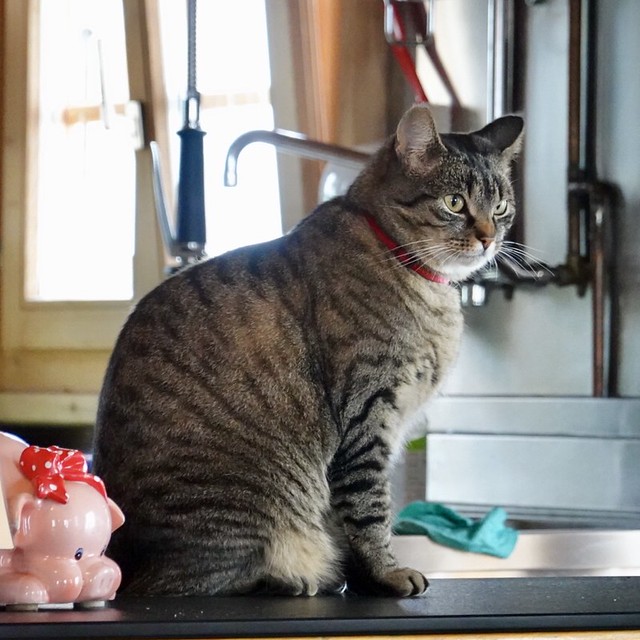 The weather tomorrow, though, is worrisome: showers and heavy rain. It’s also one of the highest parts of the trip, going up to near 3000 meters. With the air temps just above freezing where we were at 2200m, that would mean many miles of hiking through clouds and snowfall. That would the trail difficult to find, and problematic footing under even a light snowfall. Tomorrow night’s lodging is at a bus stop below the Barrage du Dixence, so we pretty much decided that we’d walk down the 4km to Fionnay, take the bus it down to Sion, and then catch a bus back up to the Barrage. 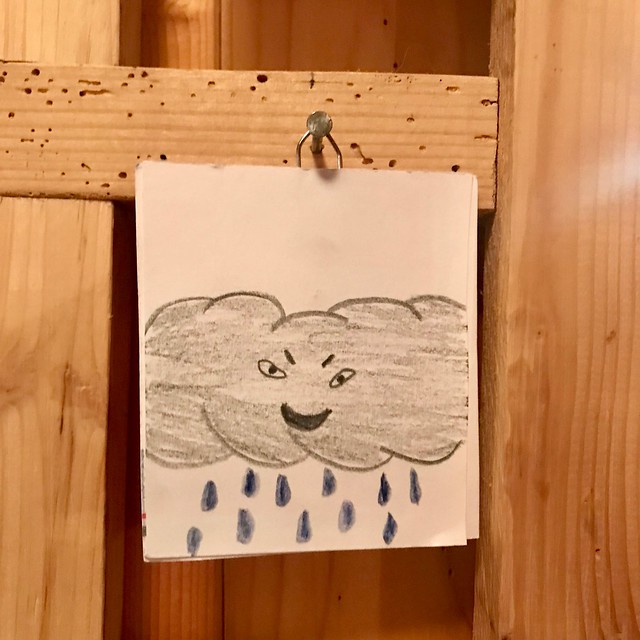