Ah, a decent nights sleep in a comfy bed. A quick euro breakfast, and we ambled around town, around the gardens to the CBD. Picked up our hut booking tickets at the DOC office, rearranged the bus tickets slightly, walked to the Fresh Choice for olive oil, looking for a small plastic bottle but settled for a 500ml. Yay, a pound of olive oil. Goes well with the kilo of mixed nuts and the 1.5 liters of red wine. This hike better be ‘easy’, or we’ll drink the wine until it is.

The bus ride out followed a curvy lake that reminded me a lot of Lake Chelan in Washington state, even down to the grassy covered mountains thrusting up on either side. At the end of the lake, we found the start of the track, running into a lot of Ultimate Hike Experience hikers finishing up, the ones that paid a thousand or two dollars to tramp to comfy lodges with pillow turn down service and sommeliers and high thread counts. The Ultimate Hikers were just gushing, “first time I’ve ever hiked, it was amazing!” I smiled, and kind of pleased that someone discovered the joys of enjoying and exploring and experiencing nature on your own two feet. 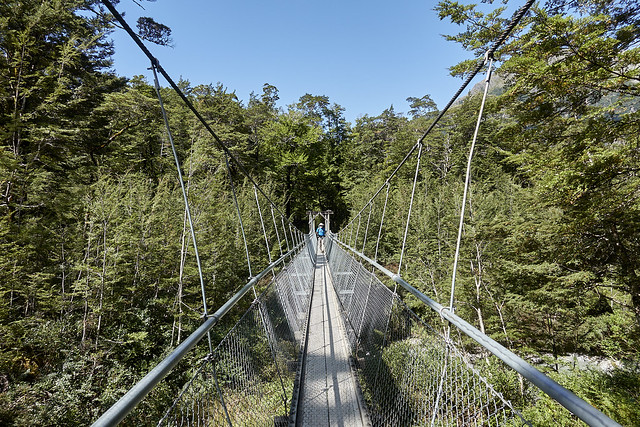 Today's walk was easy; some 9km/6 miles up a flattish valley to Routeburn Falls hut. We’d booked two of the 40 bunks, and with the easy walking weren’t really in a hurry to get anywhere. I was worried about sandflies—but it was a breezy sunny day, with passing clouds, temperature around 20C/68F-—and there weren’t the swarms of flies I feared, like mozzies in Alaska--in fact there weren’t any sandflies at all I wore a t-shirt and shorts for the rest of the day, and didn’t regret it at all.

From the start, the track wandered up through beech forest, on bridges across ravines and streams, through the ferns, next to the Routeburn river, green like an old-fashioned Coca Cola glass. Wonderful country, and often we’d get narrow glances up broad valleys and the snowy peaks above. 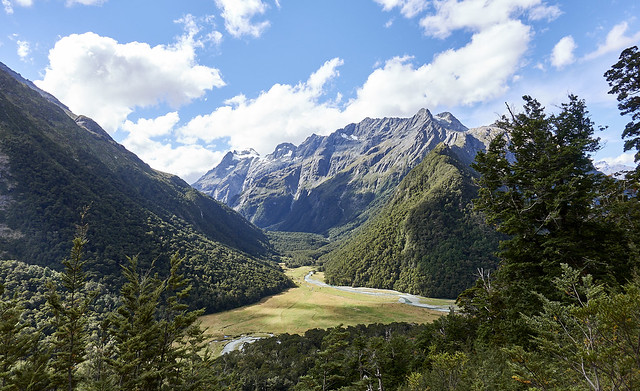 We stopped at the campground at the head of the valley, had some trail mix and drinks, and finally brushed off a sandfly or two (they do exist!). Another hour walking up the hill and we were at the busy hut, where we broke out the organic red wine and nuts and enjoyed a relaxing evening, watching the other hutters make their evening meals—-some Japanese hikers making curry rice with special rice-cooking gear, Kiwis making pasta in new Kathmandu kit, some Minnesotans going for the pouch-dinner. A curious mix of folks. We settled for some dried pasta meals that we made with powdered milk and that olive oil. It was OK, but not really all that.

Then bedtime and tomorrow the hike up and over Harris Saddle. We’ll linger a bit in the hut and leave midday after the rain passes for a less soggy day. We were real lucky today with the weather, maybe we can avoid it again tomorrow, though the forecast is for 'showers' in the morning and clearing later on. That's pretty much most of the weather forecasts around here; I can't imagine a forecaster wanting to predict a fine sunny day then have it be drizzly and gray.

Day 2: To Mackenzie Hut via Harris Saddle and Conical Hill

Well now. We both slept long... to bed at 9:15, just after sunset, and woke up at 7:15, just before sunset... a good 10 hours of zzzzzzzzzzzz. The hut was crowded with occasional snoring that I slept right thru, even without earplugs. Chris reported over brekkie that some Dutch visitor yelled at one of Koreans in our bunk-row to stop snoring in the middle of this night, telling him in English to sleep on his side. The Korean apparently did not understand.

After some oddly tasty oatmeal we decided the weather looked good enough to go up to the saddle. With the showers were forecast in the morning and fine by afternoon, we asked the hut warden. He just said "Hmph, I don’t think it’ll rain at all today”, and it didn’t, just cool breezy days with temps right around 10C. Good hiking weather.

We left at 9:15, and the track ascended quickly above the bush line into an austere bronze-and-green-and-gray landscape of tussock grasses and rushing water surrounded by steep mountains. It looked very odd and alien, and the silvery metallic looking plants--astelia and celmisia daisy bushes—-only accented the other worldly feeling. It was wonderful, and while we were warned that this was the toughest part of the track, we didn’t think it was all that, and were up on top of Harris Saddle in 90 minutes after starting out. 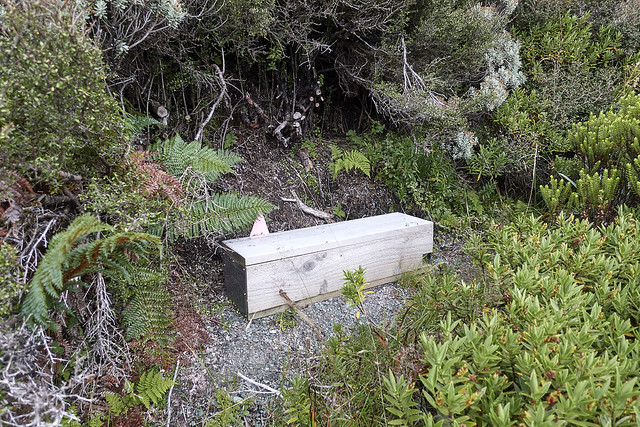 We hung out a bit in hut and when we saw the clouds lift we scooted up to Conical Hill for a view around the country. It was expansive, we could see all the way north to the waves breaking on the shoreline, and to huge snowy mountains just west across the Hollyford Valley, and down to Harris Lake. Not too windy either, and we spotted a couple of birds and some odd round mammal scat too.

The goat track was a bit rougher and more uphill than we expected though, and it was windy up on top, though I enjoyed taking pictures of the alpine plants all huddled against the rain and wind and snow. 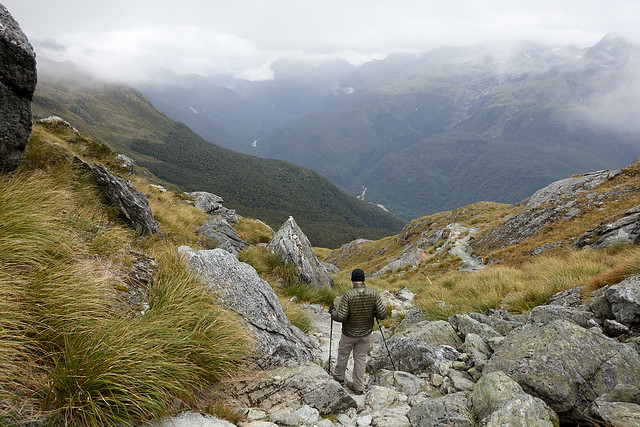 Down to the saddle

The wind was cold, though, so we headed back down to the hut at the saddle, the second-class hut and not the posh hut for the guided walkers, who were just starting to arrive—-we noted they smelled of industrial laundry detergent, and many women had taken the time to put makeup and jewelry on for their adventure, wondering what big decisions they had made earlier in the morning: “Oooh, honey, should I wear the gold braided necklace, or the colorful beaded one? Which bracelet accessorizes best for the trail?” Really? And yes, there were coordinated bangles and beads.

The remainder of the track for the day was wonderful, a high alpine walk with expansive views west to the Darran Mountains and its cirques and glaciers, some peek-a-boo views of the Tasman Sea at the mouth of the valley, lots of the strange alpine plants. We loved it, and we took our time ambling along the track.

A couple of hours went by easily, and then we turned a corner and looked down on an emerald lake. That must be Lake Mackenzie, we could see the huts on the far side of the lake. Another 45 minutes of downhill brought us to the hut.

The hut had a large downstairs common room, and two bunk rooms, one above under the rafters and another one in another building that was darker and less appealing. We found our flops upstairs, enjoyed some coffee and tea, cooked some dinner, listened to the hut warden’s speech... then trundled to bed.

Day 3: To The Divide via Key Summit

We were out of bed early at 6:15am, a full hour before dawn, and made the oatmeal’s and the Starbucks Via coffees. I drug my pack outside the noisy hut to the verandah to do my final packing, and we were off just as it got light enough at 7:30am—just about sunrise, as the stars faded away; I spotted Jupiter or maybe Saturn just to the west of the moon. Who knows, the air here is really pure and clean.

It was a perfectly still, cloudless day, which is highly unusual in this soggy part of the world, and by being the first out we were able to see the birds skittering along (and on) the track, not particularly worried that we were there, clinging to the moss and staring at us, well within arms reach. There was a bit of birdsong now and then too, one bird sounding like a red-winged blackbird with a one-TWO-three-(pause)-fourFIVEsixSeven. A robin? Dunno, really, but it sounded awfully familiar.

The track stayed in the forest for a long while, with only a few glances now and then to the spectacular Darran Mountain range to the west, across the Hollyford Valley. Occasionally we could see most of the way to the sea northwest along the valley, or at least the lake just before the sea, but what we really enjoyed peeking at were the deep cirques across the valley, with perhaps lakes in them, and snow up top, and definitely that ice blue color at the snouts of various glaciers. With such wonderful weather, we knew it was just time before the sightseeing flights started, and yep, at 8:30 the beautiful valley was buzzing with propeller planes, one after another, a whole squadron full for half an hour, buzz buzz buzz. At 9:30 the planes changed to helicopters, even more racket, thump thump thump. So much for birdsong and waterfalls, and I felt fortunate that when I look back on the trip I won’t be hearing that irritating drone.

We passed under Erland Falls, 172m high, dropping down from a hanging valley above, and by 10am found ourselves at a hut, scooting inside for some coffee to warm up—-while it really wasn’t windy, the temp generally hovered between 5 and 10C (40 to 50F), not really warm enough to warm up with walking.

With coffee achieved, we headed up to Key Summit, 200m higher than the hut, an exposed alpine knoll with great views. After some gawking, it was an hour’s walk down to the car park and the end of the track, strangely narrow, and we were swimming upstream yet downhill against the strong tide of daywalkers heading up from the car park: we must be close to the end. There were several couples walking up, holding hands, whose bonds of love could not be broken as they strode happily, side by side. This sounds all romantic, and it would be if they were promenading on some wide beach or sea front walkway, but on a 90cm wide track it seems like a misguided attempt to insist that every oncoming walker recognize their romance. I stepped aside for two of these couples (the first happily, the second much more reluctantly), then insisted on my 45cm of track width and shoulder checked a few of the remaining five or six couples that just wouldn’t give an millimeter.

Down at the Divide car park, we waited for the bus, then hopped on it to Te Anau, a short 90 minute ride away. Te Ana (which we’ve been to in 2009, though I only vaguely remember it) is one of those broad mid 20th century towns, an expansive squat town centre, one shop deep with broad awnings, with angled parking scattered about. It was wonderfully pleasant, unlike Queenstown, all hectic and expensive and verging on garish with casinos and jade and special healthy manuka honey pots for the low low low price of $150.

In Te Anau, it was all about resupply: we purchased some food, shopped at the well-stocked supermarket, enjoyed our cabin at the Te Anau Top 10 Holiday Park (highly recommended), did laundry and showered, and ate pizza and beer in the cool sun. And we made a ‘leave behind’ box to save a few pounds on the Milford Track, our next walk and certainly the greatest of the Great Walks.