Headed back to Oaxaca for Thanksgiving... taking that 1:00am nonstop flight from Tijuana, yawn.

Got to the hotel around 8am, and slept most of the morning.

Woke up around lunch and found coffee. Yum.

Walked around a little bit. It's a pleasant, relaxing city, with a few newish hipster spots.

Black and white is always so artsy. :-)

After some long walking around, we ended up at a mezcal shop north of Templo Santo Domingo, and had some tasty local beer. Not too much, since dinner was at Casa Oaxaca, which we'll say is our favorite place for dinner in the city.

On Friday, we headed out to do a "mezcal" tour, which really just meant heading to Mezcal Real Minero and seeing their operation. It's in Santa Catarina Minas, about an hour southeast of Oaxaca city.

Lots of different agave species were growing around their main operations site.

A cheesy picture of myself.

I like the batbox for pollinating the agaves when they flower. They've installed a webcam in it as well to watch the bats come and go.

I realized as well why agaves can be used for making mezcal. Agaves only bloom once, after several years of growing--say, 6 to 25 or more years, depending on the species--and after flowering the plant dies. All during that time, they're building up energy, stored as starch around the center part of the plant of the, to send up that massive flower spike. Mezcal comes from all that energy; the starch is broken down into sugar by roasting the center part of the plant. After roasting, the bits are all mashed up, fermented in an open tank to turn the sugars to alcohol, and then distilled. Booze distilling 101.

They're doing a lot around breeding and selecting desireable agave traits.

We left the ops center and headed up to the distillery, where they were doing it all today. preparing the roast of a few different types of agave. 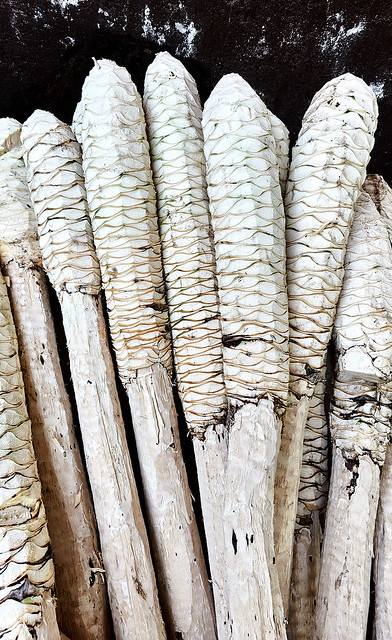 Some of the roasted piñas were done, so they gave us all a sample. Very very sweet, almost like sugar cane, but with a more smoky flavor.

The roasted agave is mashed up and put into these open-topped barrels to ferment. I'd show pictures of the distillery, but they didn't want us to take pics there.

And lastly, we sampled the various types of mezcal. I liked the arraqueño thebest. 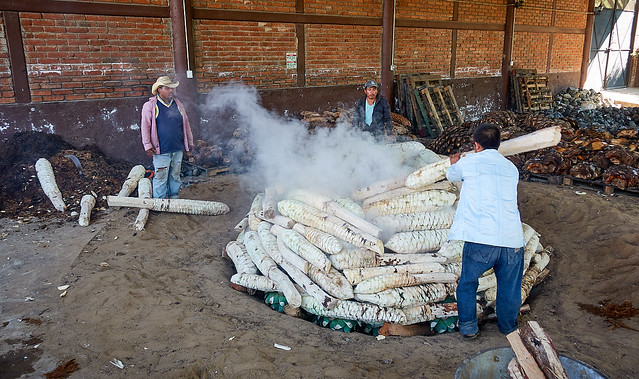 Throwing more agave on the roast

A couple more pictures back at the roasting pit, after the tasting.

We took a long drive south to visit some caves and do a little hike.

The caves were very blobby and very vividly colored (hey, it is Mexico, things must be colored brightly!)

Lighting wasn't the greatest inside the cave, but we came out through a large gallery that was vividly colored.

Hiking back we walked through limestone and marble countryside, with bromeliads on the ground and in the trees.

I caught a cricket. They're fat and delicious and in season at the moment.

Man were we tired. We still hadn't recovered from the redeye flight, and the dance club music and local dogs kept us up at night, ugh. So we kept it local.

We found a tasting dinner along 5 de Mayo. Tasty. 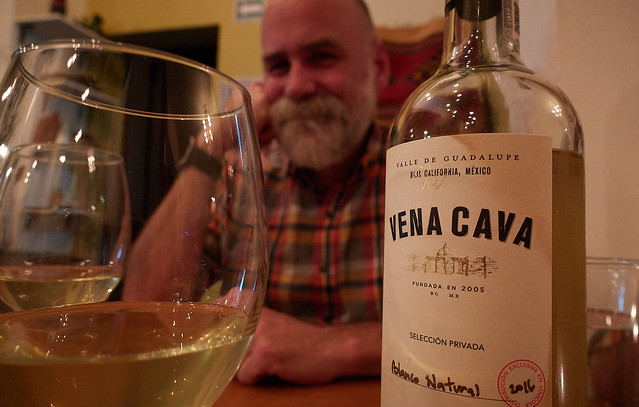 Farewell dinner with a faraway and local wineg

And then back home.