It all started with a question from Chris: "Hey, wanna go somewhere odd for the holiday break?" Sure, I responded. "I can get us to Manila for $600 round trip on American". Yeah, I was interested, in a pure dollars-per-mile sense that works out to maybe 40 cents a mile. And we can jump off from there to--is there somewhere nearby that's interesting?

Some more research ("World Heritage" + country name is a good search) brought up the Gurang Mulu National Park in the north of Borneo, with rainforests and the world's biggest cavern and orangutans. And oddly enough at the entrance is a Marriott, placed for once in a jungle and not outside a bland Midwestern suburban office park. Let's do it.

Friday after work, such as it was, we drove to LAX, leaving a little early to try and beat the MAJOR WINTER STORM that everyone was all excited about causing a white Christmas even in the mountains of Los Angeles. Our itinerary was to take us from LAX to Hong Kong on AA 193, then onwards to Manila on Cathay Pacific. Chris's boss has generously donated a few system-wide-upgrades, and Chris has made sure to upsert us into biz class for that 15 1/2 hour flight from LAX to Hong Kong.

We had thought we'd just bring carryons, but with an intentional 16 hour layover in Hong Kong to scoot into town and see the sights, we decided to check our lightly loaded wheelie bags. I was all for just bringing my ultralight PCT backpack, but figured a wheelie would better protect whatever boozy bottles we'd find to bring back home :-). We trotted across the weirdly new airside connector from T4 to TBIT, and plopped down into the OneWorld lounge... and after a bit, wandered back to the tired AA lounge in T4 and boarded the flight.

It was comfy seat, and we taxied out to the north set of runways at LAX, and stopped and waited, then waited some more. Hmph, our 12:30 departure wasn't happening. I dozed. Something is up. Finally the captain said "we've exceeded crew duty hour limits so we're heading back to the terminal". Gee thanks. A buddy texted us and said the captain had indicated we'd burned too much fuel taxiing to make it to Hong Kong, then he started bitching about AA corporate policies to the ATC. Not cool dude.

And now what? We'd worried about this; earlier in the week this flight had taken off 15 hours late... at 3pm the next day. Ugh. We were instructed to wait in that shabby Admirals Club, and we did, standing around for two hours while the four agents tried to figure out why no one could be booked on other flights--it literally took the first four groups an hour and a half to get sorted. I feel sorry for the Canadian couple trying to get to HK--their inbound flight missed the connection, so this was the second time they've tried to get out on AA to HK.

Chris did a little magic, though... he called Susan at AA, and soon enough he had us rebooked on a Cathay Pacific flight at 8am. But our luggage, would it transfer? It would. Great. So we retreated to a corner of the lounge and I slept a couple of hours in a chair.

Next morning we hopped on the Cathay flight--and it was great. Before pushback the Cathay captain even said "we're delayed as we're still transferring luggage from the American flight", which made us feel good as well. So we won't have much time in Hong Kong, but we can go on. I slept a solid 7 hours on that flight, then dozed another 3... so the 15 1/2 hours in the air didn't seem too long.

Upon landing, though, Cathay had texted us both some bad news about our onward flight: Super Typhoon Nina had developed and was aiming at Manila, so our outbound flight was delayed 6 hours and will arrive at 6am. Gee, that's just great. What do we do?

Checked luggage was not there. Headed over to Baggage Enquiries. Cathay has no record of it being scanned. Chris checks AA app, baggage last scanned at LAX. Hm. Chris digs a bit and calls the AA baggage office at LAX and finds there was some 'unknown scan' at some point last night, whatever that means. We're getting the sinking feeling our baggage has disappeared. Other folks that were transferred to our Cathay flight are filling out lost luggage forms, though they're staying in Hong Kong. We decide to get anxious about continuing on into Super Typhoon Nina (or Nock-ten, confusingly it's called one thing by the Philippines and another by everyone else).

We're just connecting in Manila to Kota Kinabalu. Avoid Manila? Air Asia has direct flights... for $900 each, ouch. But we've already prepaid for stuff, so do we just suck it up? Hm. Fly to KL and then to KK? Could be done. Fly via Guangdong to KK direct? What about the checked bags? If we bail out of the Cathay flight, will it void our flight back to the US? If we just want to cut bait, how much is HKG-LAX (about $400, which is a steal).

There's no obvious answer. Flights are kinda shuffled around but there's no real sense of dread from the airline employees. I'm guessing they've seen it before--don't typhoons happen all the time here in this damp part of the world? Certainly lost luggage happens. We assess our options as we take the train into Hong Kong Station. Let's wait and see.

Hong Kong is awfully crowded with families and strollers and Christmas decorations. The IFC mall bathrooms have lines for the women's toilets that are several dozen women long, tweets are taking selfies with Christmas trees like they've never seen a Christmas tree before, and we say ugh let's at least find an ATM, but can't find any. Feh, let's take the Star Ferry across the harbor and gawk at the lights.

Star Ferry has a line too, a big line, so we line up, maybe they take credit cards? Nope. We spot an HSBC ATM, but Chris's card errors out. Anxiety increasing--lost luggage, typhoon, now maybe non-functional ATM cards? After another five minutes we discover that no, Star Ferry does not take credit cards, we half-heartedly try and beg the 50 cent US fare off some European family and fail, so we punch our way through the crowds and vendors on that bridge back to Central and MTR it to Kowloon... and discover my bank ATM card is declined too.

We walk around, but it's just a big busy city and neither of us has had much sleep in the past two days. I want quiet, but I'm oddly calm and not cranky, there's not much we can do and I feel that thrashing about isn't going to clarify anything. Time to head back to the airport--yay, only 20 minutes on the train--and we indulged ourselves with the showers and noodles of the "View" biz class lounge. 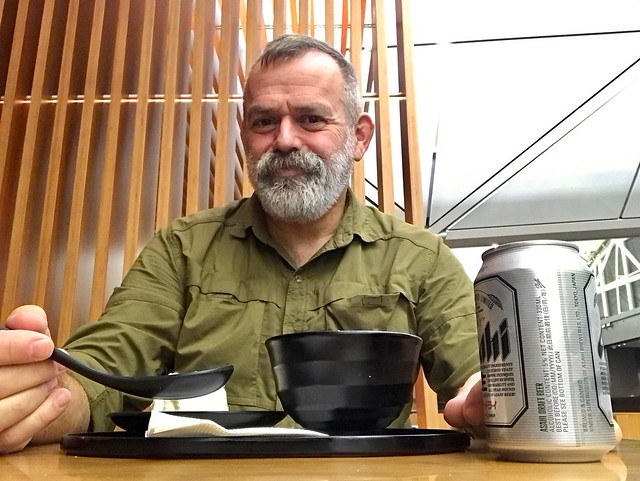 Lounging. With my Dan Dan noodles

Still no word on checked luggage. Typhoon still spiraling slowly towards Manila. We order dan dan noodles and pork buns in the lounge and I feel frustrated but also fortunate that we're able to do this, it's just an episode of Aggregated Affluence and these difficulties will pass, and this is just another night sleeping in an airport, no biggie.

Flight takes off a bit after 4am to Manila, just under two hours, and a bit bumpy for the last ten minutes. Manila airport T3 is better than expected, though they're blasting Christmas music; it feels like a modern Mexican airport. We held out faint hope for luggage, and yep, it didn't show, so we filled out a lost luggage report and scooted to the hotel in Makati. We'll be staying at the same hotel on our way back home to LAX, maybe the luggage will find its way there in the next few days.

The hotel is pretty fantastic; I'm impressed (it's the Discovery Primea), and even better it's across the street from a large number of shops. There's a Uniqlo across the street, so we stock up on a few more shirts and undies and sox, walk next door and I get a venti carmel macciatio in a really good supermarket (hint: they have a section of Waitrose-branded items)... and I decide to write this.

Oh and update! It's 2:20pm and the concierge at the airport says the baggage has arrived! Would we like to get it tomorrow? No, we're gone. Time to piece it all together again, and yay. And we have a good amount of new Uniqlo clothing. Ah well, now I have undies and socks for the whole trip now!