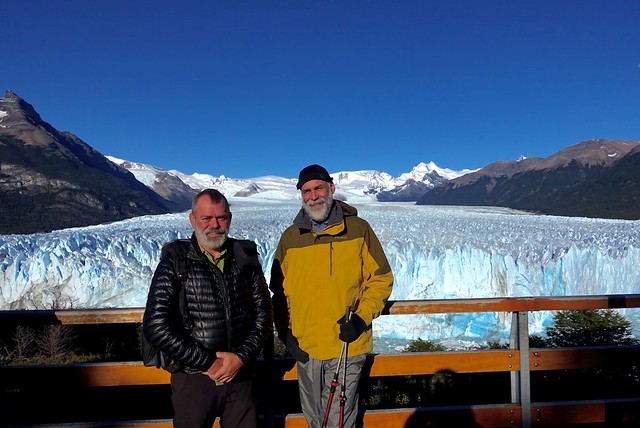 We were picked up at 7 by a little shuttle, and transferred to a bigger bus for the hour-plus drive west to the glacier. El Calafate is about 80km/50 miles east of the mountains, a cool arid place, kind of like Bend, Oregon or something. The glacier flows from the southern Patagonia Ice Field, a 200 mile long stretch of snow and ice that covers the Andes in this part of the world--it's those 8000' high mountains that wring all the rain and snow out of the clouds, and there's so much snow the underlying landscape has never been uncovered. 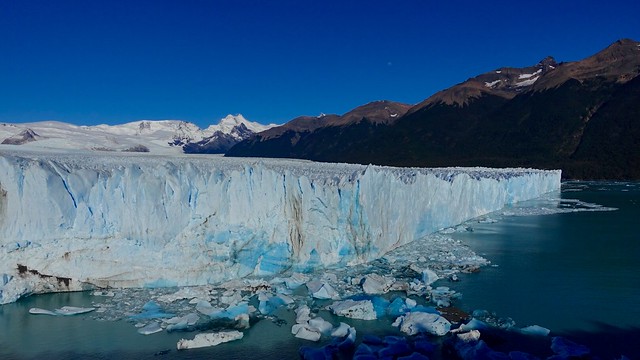 Face of Perito Moreno glacier from the balcony viewpoint

Our first stop was the balcony overlook at the glacier, about 800m on a peninsula across from the face--with the clear calm sunny weather, we could hear the ice cracking and gurgling, and watched several small ice collapses and one huge one off the 60m/180 foot tall face. Cool stuff. We could also see that the glacier front also was touching land below our viewpoint. 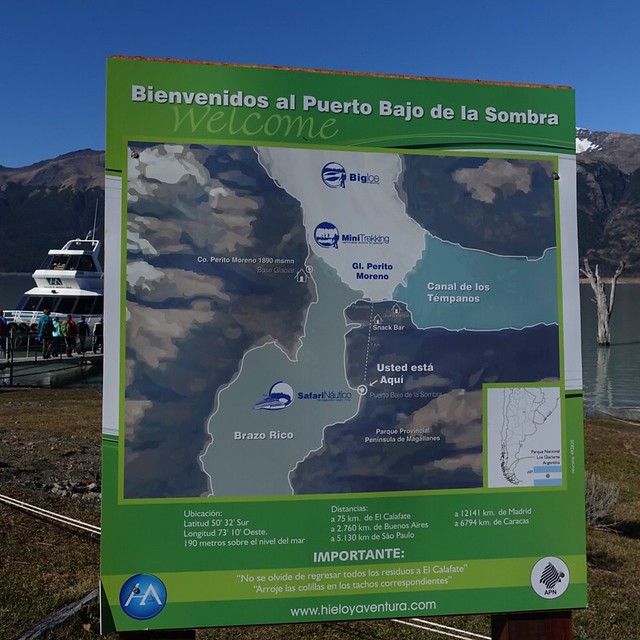 Perito Moreno glacier is unusual not only in that it's super-easy to get to, but because the terminus of the glacier empties into the narrow middle part of a C-shaped lake. Sometimes the glacier extends all the way across the lake--like when we saw it this morning, splitting the lake in the and holding back the water level in the southern part of the lake with an ice dam. When the water gets really high in that part of the lake, it can put a lot of pressure on the ice dam, and it ruptures in a big old collapse, draining the lake very quickly. Kinda cool--and this means that the southern lake has a natural ring around its shoreline, like a reservoir. This glacier, also, is stable; it's not receding like many glaciers around the world with global warming. 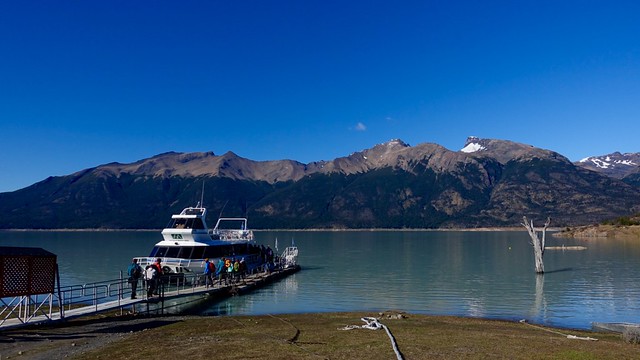 Boat to the glacier 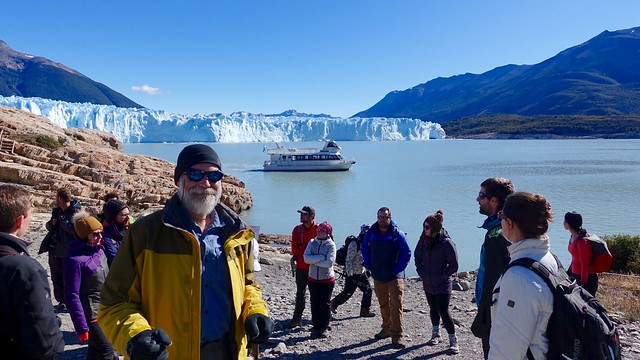 Getting ready to walk

That's where we headed next, to the south lake, where we took a 20 minute boat ride to a little refugio to start our hike. We were doing the Big Ice trek, so we had another 45 minutes of walking along the moraines on the south edge of the glacier. We stopped at a waterfall-fed stream for drinking water (yay no filtering), I took pictures of plants (duh), and then we arrived at a small base camp. We were fitted with crampons and a waist harness, given some short instruction on how to walk in the climbing crampons, and then it was time to get out on the ice. 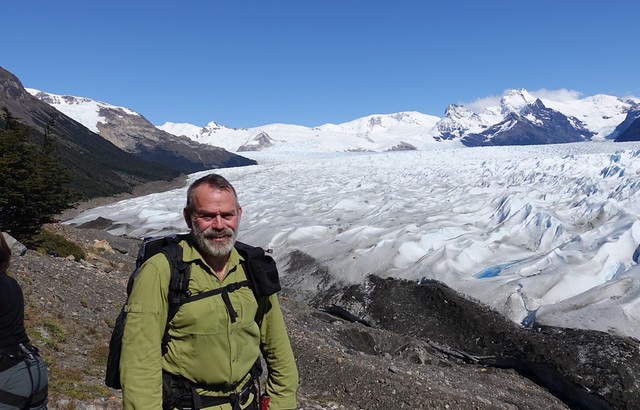 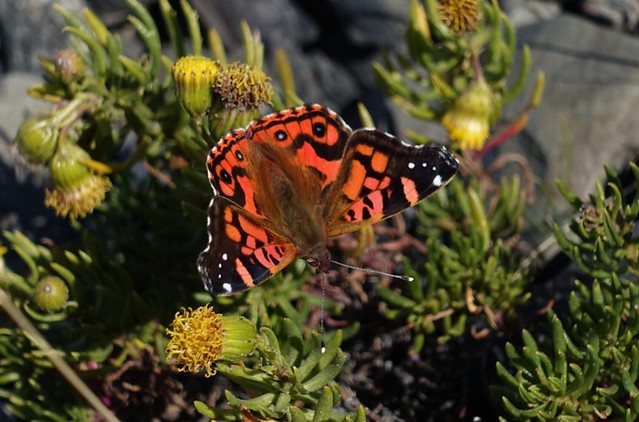 Butterfly on a daisy bush above the glacier 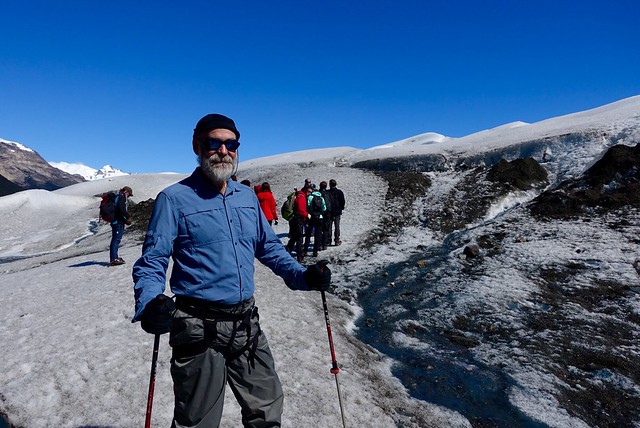 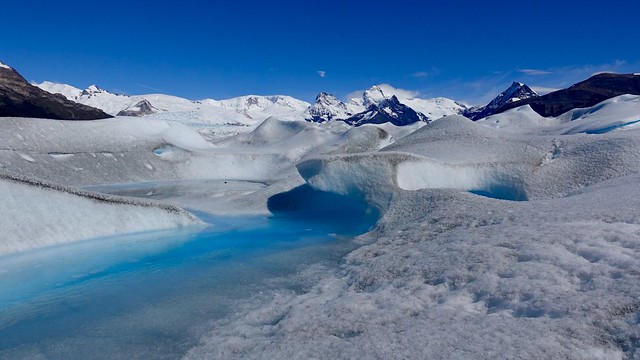 That was wild; I'd never walked on a glacier before! The ice was hard, like frozen gravel, and crunchy, undulating every which way. We were on a hilly portion, and the top ice got cleaner and cleaner as we moved into the middle of the glacier, away from the dirty hillsides. The thing that was most impressive was the deep vibrant blue color; I've never seen a color like that before! 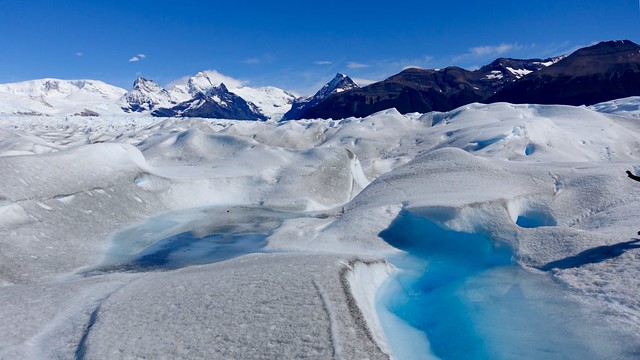 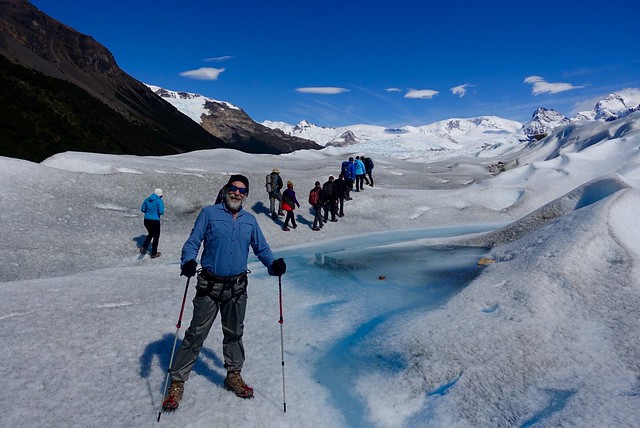 Warm day for an ice walk

There were caves and crevices and water running, and we walked around and looked at the odd shapes and colors, eventually winding our way after a couple of hours to a lunch stop at a moderate size blue lagoon of melted glacier. It was really like walking on another planet. 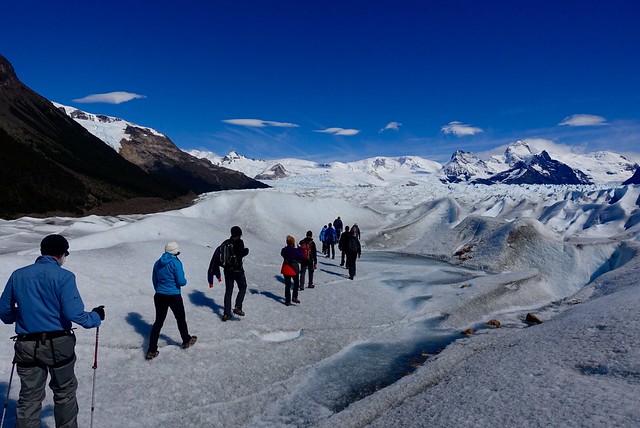 On top of the glacier 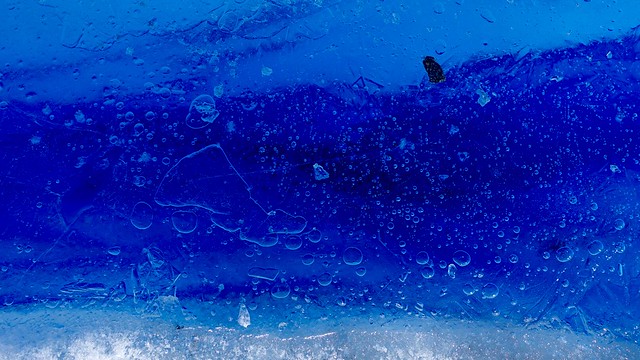 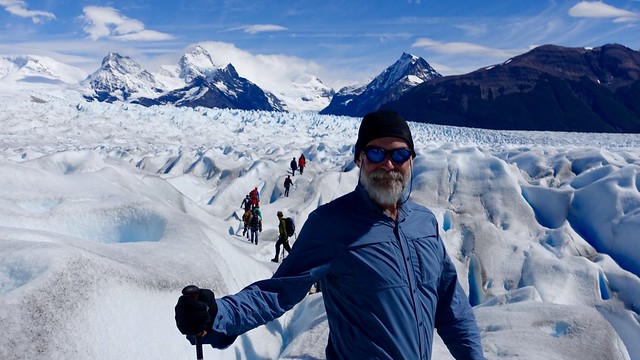 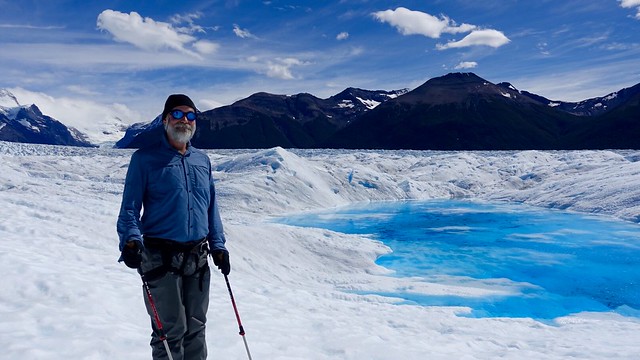 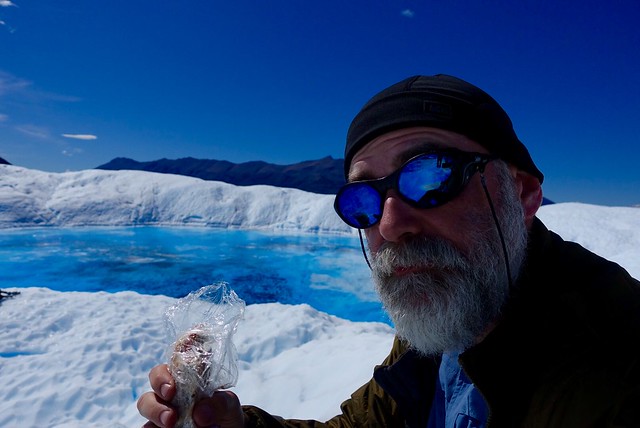 After lunch we walked some more over to a huge sinkhole, all twisted and eroded, and took heaps more pictures along the way. The weather was turning, it was getting cloudy and breezy, but the glacial blue color remained. 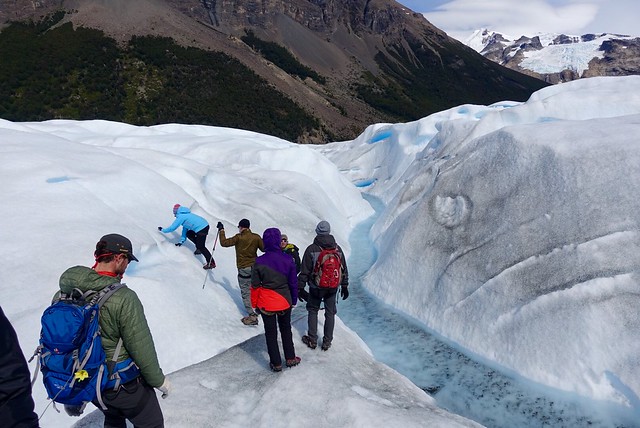 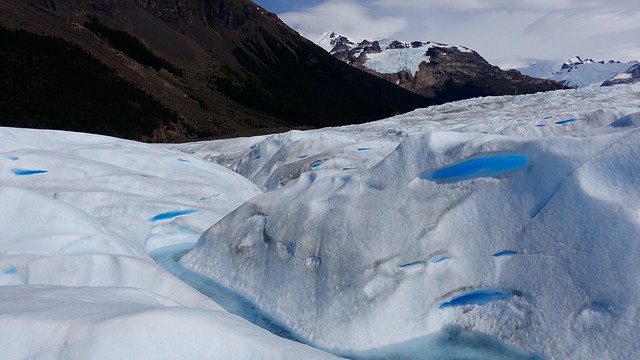 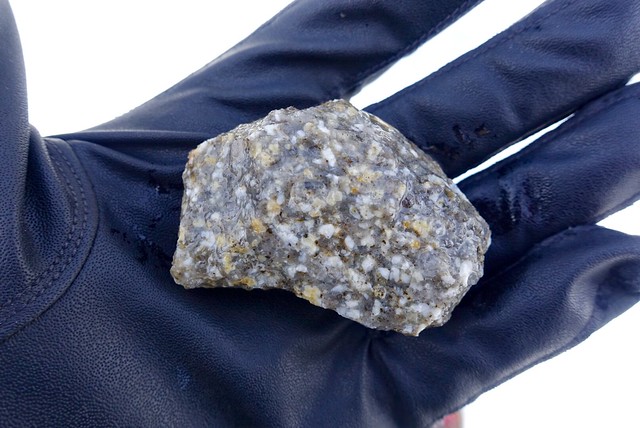 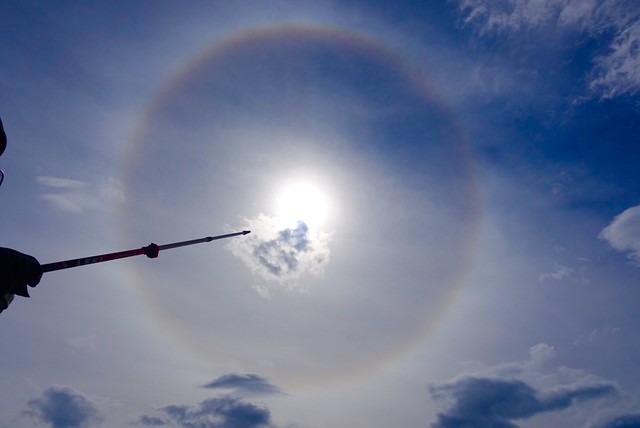 Then back to base camp and a walk back to the boat, where we were served little shots of scotch on the rocks, with the rocks of course being ice chipped from the glacier a few hours before. :-) 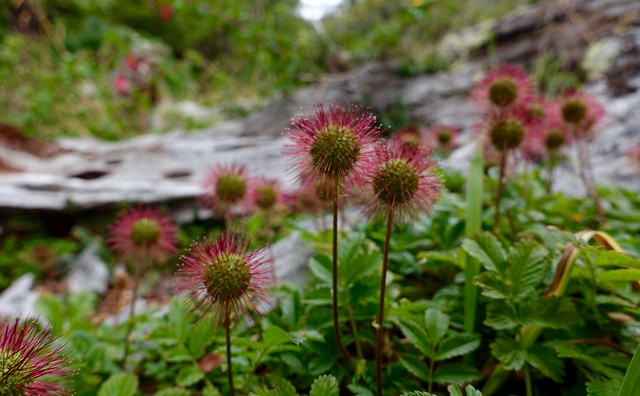 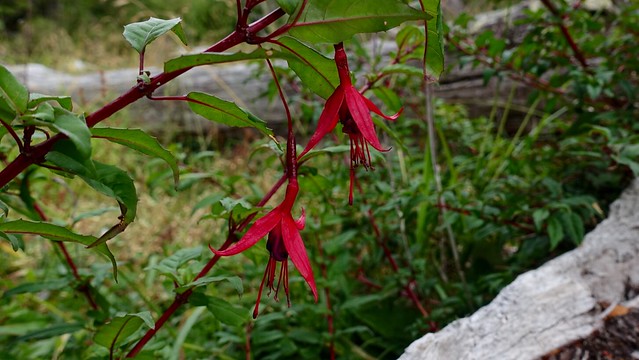 Fuschia magellanica along the trail 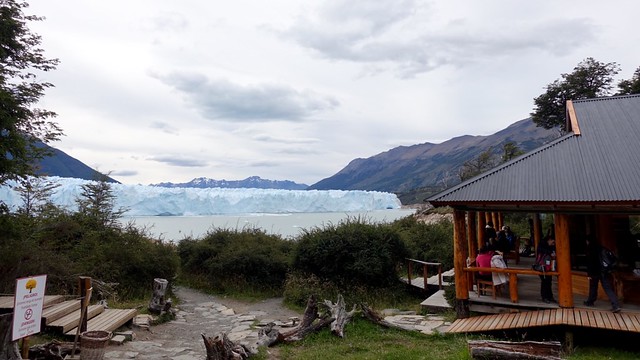 Refugio next to the glacier 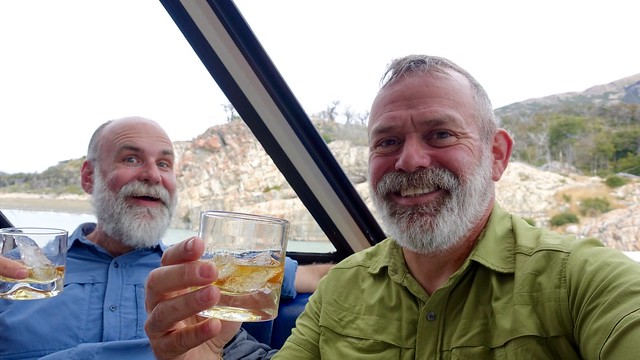 Back on the bus around 6, and we were back at the hotel at 7--just enough time to have a hot bath. Chris went to the bakery we enjoyed yesterday and bought sandwiches and a good porter, plus alafores and bubbly, and we had an in-room picnic and called it a night.