We were up at 6, and ate a quick breakfast at the B&B, intending to get on the trail early. The winds and clouds seem to be calmer in the morning in this part of the world, and the weather indeed was calm and the air cool but not cold. As we ate our Sucaritas or whatever Frosted Flakes are called here, we watched out the thoughtfully installed horizontal window that looked directly onto the granite towers, and watched them indeed change from rosy pink to bright orange to granite white.

We headed out down the Main Street of El Chalten, which feels quite a bit like a Wild West town, with buildings in various stages of construction scattered about, many with rebar sticking out of their top concrete floor, those odd sloppy handmade 'bricks' that look like beverage containers crudely slapped into place on the new construction. What number would many survive an earthquake I wonder? Answer: somewhere close to zero, unlike a few miles away in Chile where every new building would be standing. First banks, now buildings, yep, the people here are great, but the structures of Argentina are pretty ramshackle.

With bread and pastry aquired, we headed to the trailhead at the north end of the main street. A ranger asked us if we knew what we were doing--yep, no fires, take out your trash, etc etc, and we were on our way. Today's hike would be around 25km/16 miles round trip, climbing up along the slopes from our starting elevation at 420m to 900m--although much of that elevation gain is in the last mile of trail. Our reward for scrambling up that last slope would be a fantastic view over a glacial lake, with various granite spires across a jagged ridge line ascending some 2000m/7000 feet still higher. The tallest, which we saw yesterday from the bus, is Cerro Fitz Roy, at 3405m/11,171ft. Fitzroy, by the way, was the captain of the HMS Beagle, the ship that Darwin sailed on when he came to this area. 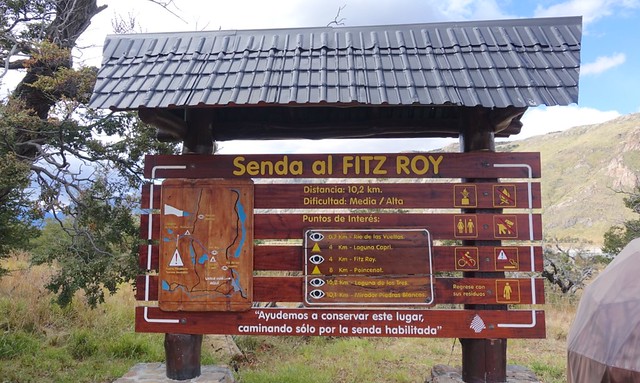 The trail headed steeply uphill at first--is this going to be all like this?--but it was wide and well maintained, and as we passed the first "SENDA FITZ ROY, 1KM of 10" sign the trail mellowed out. We stopped at a viewpoint over a glacial valley, and kept on going up at a steady moderate incline. The trail felt fairly PCT-ish, actually, unlike the tracks in Torres Del Paine, which were nowhere near as wide, and had many more undulations and jitters.

The trail split in two for a bit, and we headed to the right to a mirador, stopping and enjoying the early morning view. There was almost no one on the trail, and no wind either, though sadly we coujldn't see Fitz Roy.

The next 6km were easy and fast--we crossed a flat and semi-marshy landscape, good views off north, stopped to help a gaggle of Thai tourists take a group picture, and really enjoyed the well-built trail--including some wonderfully designed walkways across a wetland.

Through the camping area, across the Rio Blanco (water is safe to drink, said the sign), and then the start of UPHILL.

It wasn't actually that hard going up, sure, we had to stop, but the trail was supremely well marked with little yellow arrows on sticks, and lots of "AREA EN RECUPERACION" signs to detempt hikers from short cutting. There was a little level bit, one last scramble, and we were there.

And what an awesome view it was--the blue blue lake below, off to the right a glacial blue glacier, huge sagging ice field, a glacier to the left, and above it all the towers and spires disappearing into the clouds, which would occasionally part for a wonderful view. It was literally hypnotic. Best of all, it was warm and calm, no wind, and we decided to just hang out and watch the show--we could see much of the way up Fitz Roy, but not the top, and we were hoping it would appear.

I decided to have some video fun--static photos are OK, but the clouds are what's really making these rocks come to life, so I put the iPhone in time lapse mode and shot a video for half an hour, and then put the camera in 4K mode and shot some super duper high def video that should look great for a decade or two. As I was setting up the pictures, a fox wandered by, looking for scraps, and looking kinda like a coyote too. Cute, but definitely wary and wild.

The Two Million Dollar man and his tech bros showed up, though, ruining the fun. Dammit, I thought we left them and their retirement strategies behind at Torres del Paine. This time the man-boobed $2m man (still in his tight red shirt) was boasting about "I'm an engineer, I tell the company what they can and cannot do; we run the show". He gestured down to the blue lake below and bellowed at one of his groupies "I bet you couldn't swim across that!". Groupie responded with "Yeah, I'd make it halfway across, but I have no body fat so I'd get hypothermia!" $2MMan said "Yeah, just like your wife, she has no body fat either, she's so skinny it looks like she'd blow away in the wind." Mind you, it seems that Skinny Wife was standing right there next to her Swimmer Hubbie, who was assembling his GoPro on a selfie stick to take a sweeping panorama as he discussed wetsuit thicknesses for his triathleting. I stood up from my spot and snapped a few pictures of them all so I could remember in the future that I never want to be around any of the Tech Bros. 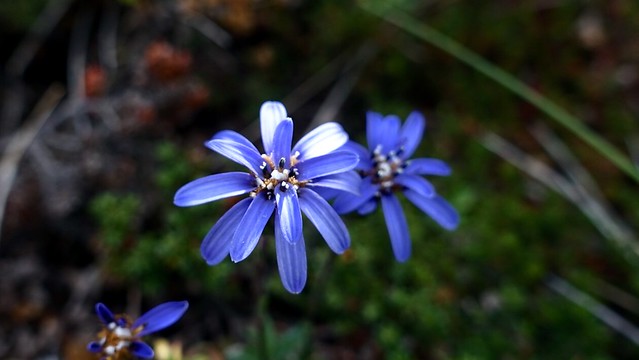 We headed back down at 1:15, and man was it crowded--all the people we'd missed coming up were now either coming up or down, sigh, and it was long and tedious to get to the bottom of the steep section. Finally, woo, we broke free, and hustled our way back down to town, stopping for a nice short break at Laguna Capri (a lake named after an island? Sure, why not...) 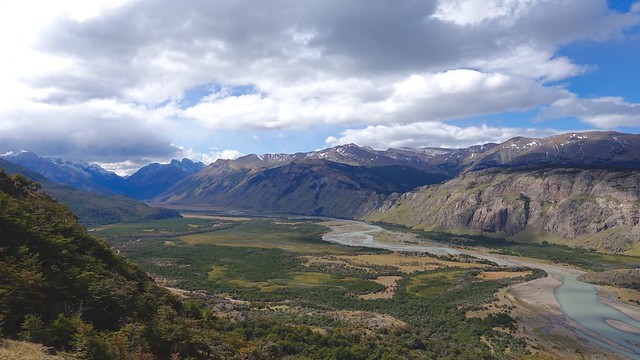 Back in town, we stopped at a local artisanal brewery for tasty Pilsner and bock (we both preferred the Pilsner), a locro (stew), and a large empanada... Mmmmmm... Then back to the room for shower and laundry and, yes, bed.

What a wonderful day.