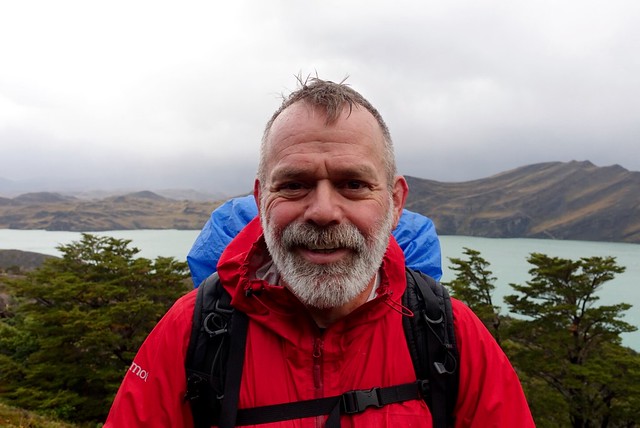 That nasty wind and rain continued all night, though we were tight and snug in our cabin we were still very undecided about what to do today--do we go to Chileno, an 11km walk, get up at 4am, see the actual Torres del Paine (again, or actually for the second time this trip, or the first time since 1999?) The weather is really sucking, and the occasionally reliable forecast says rain and wind through until Sunday at noon, when it should be wonderfully clear, but too late for us.

So: mirador for the Torres, or not? We couldn't decide, but we did know if we left around 9 we could get to Hostel Torres area and take the shuttle to the Puerto Natales and a nice warm comfortable hotel--and we had 8km/5 miles of hiking to decide which way to go. 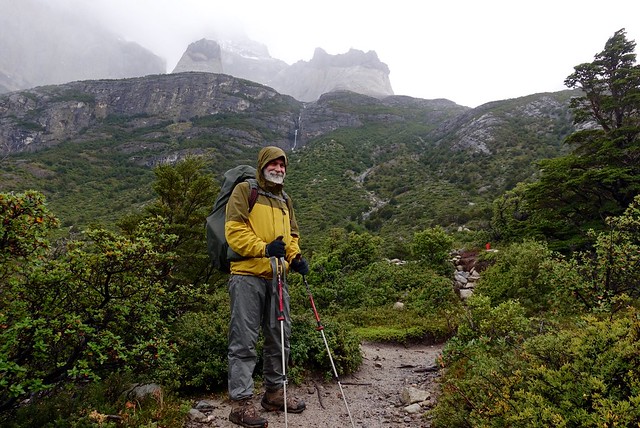 As we set out, the rain changed from its usual drizzle to a more consistently light, with occasional teasing sunbreaks (such a great weather term I picked up from some radio station forecaster when I lived in Seattle, "sunbreaks" sounds so much happier than "mostly cloudy"). Looking up towards the tops of the mountains--generally 2000 to 2500 meters higher than us, or 6000 to 8000 feet--we really couldn't see much but swirling mists. We both had sniffles and congestion as well, and set out to blame the hostels/airplanes/shelter users, of course, anyone but ourselves. 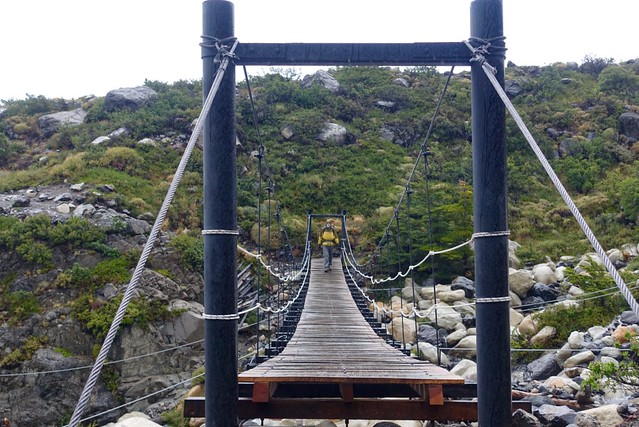 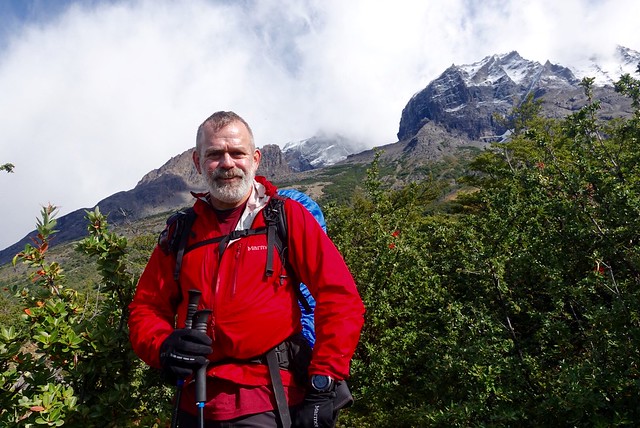 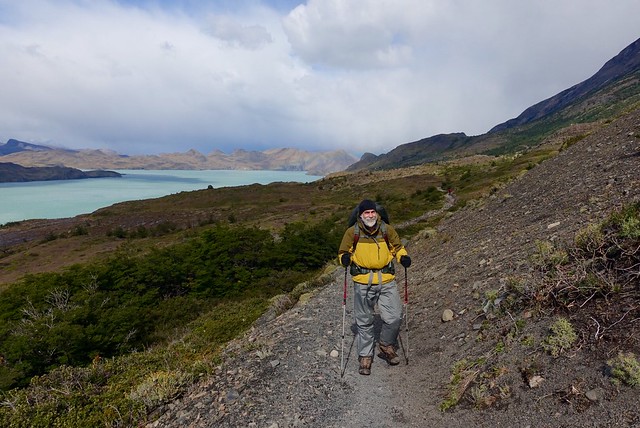 The track along the lake was pretty, but without much mountain views it wasn't stupendous, and soon we lost the lake, just traversing over odd formerly glaciated twisted layered rocks, trudging on the braided trail. At 5 miles we got to the shortcut to Refugio Chileno, and it wasn't too difficult a choice--yeah, the mirador would be nice for ten minutes, but spending pretty much a full day for that 10 minutes wasn't worth it. We had the sniffles and our clothes are definitely starting to ferment, let's get to town. 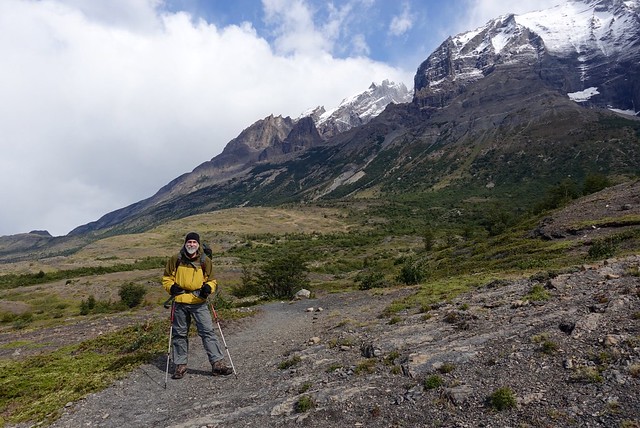 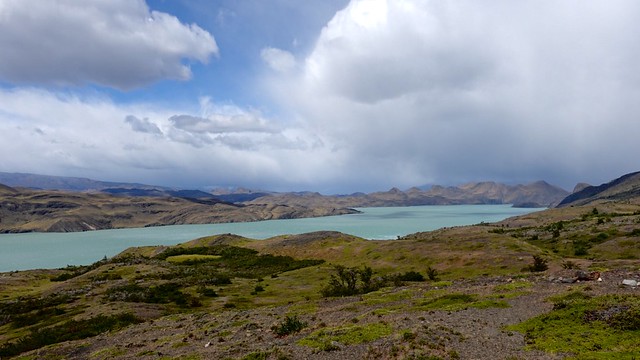 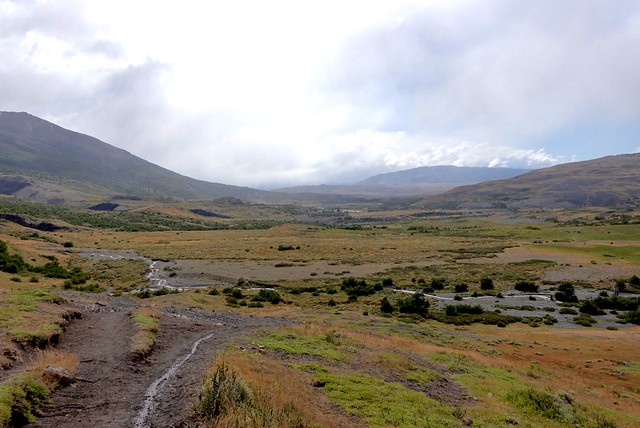 As we walked back to the trailhead, we looked up the mountain, watching a steady bidirectional stream of fluorescent green 'DOITE' backpack covers ascend and descend the steep and eroded trail to the lookout. Hm, that was a point we hadn't considered--the trail and park is so much more popular than when we were here last 17 years ago; we're also avoiding the clomping herds by skipping the mirador this time around. 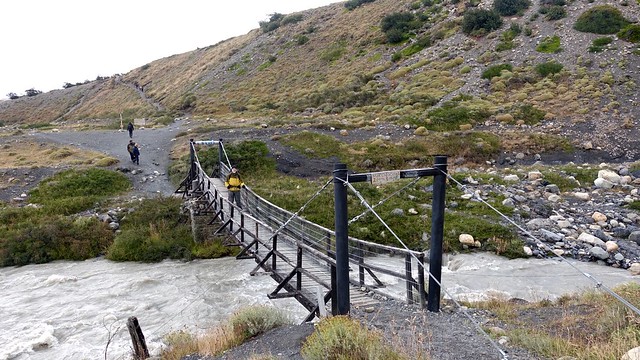 Nearing the end of the trail

We arrived at Torres Hostel at 12:40, just in time for the shuttle to the park entrance... We hopped on board, and by 1:30 we were at the park entrance, with the rain tending towards the horizontal at this point and three dozen scruffy hikers huddled under an open shelter that really reasonably would seat maybe ten people.

A bus came, we asked if they had room--sure said the very bouncy cheery driver!--and we sat and sat until we took off at 2:30. (It was $8000 pesos, in case you're wondering). The trip from Armarga back to Puerto Natales isn't far, but we did make a cafeteria/coffee stop just in case.

Around 4pm we got a decent cell signal, Chris pulled up booking.com, and found a decent half-off rate at Hotel Remota, a fancy design hotel about a mile out of town. Sounds great, we booked it, and after arriving at 5pm at the bus station we scooted over. 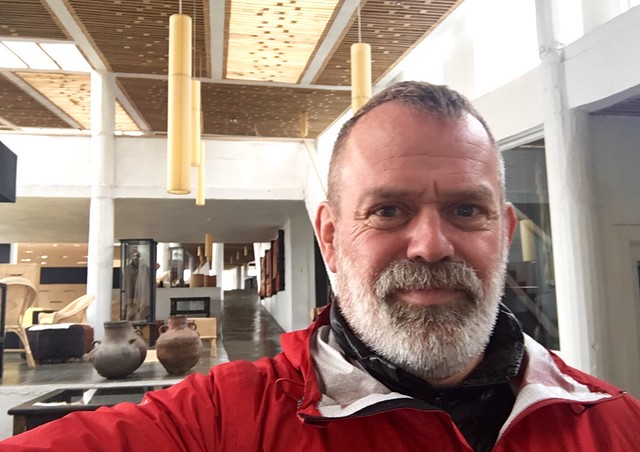 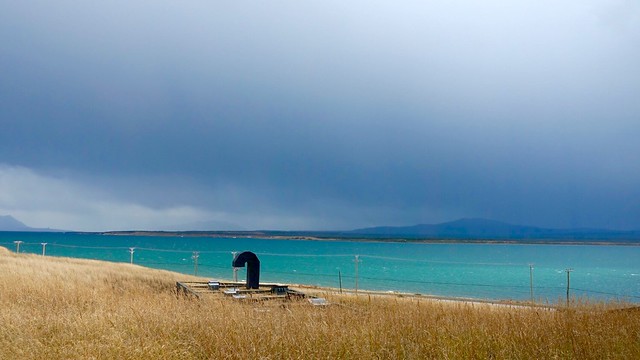 View out the hotel window 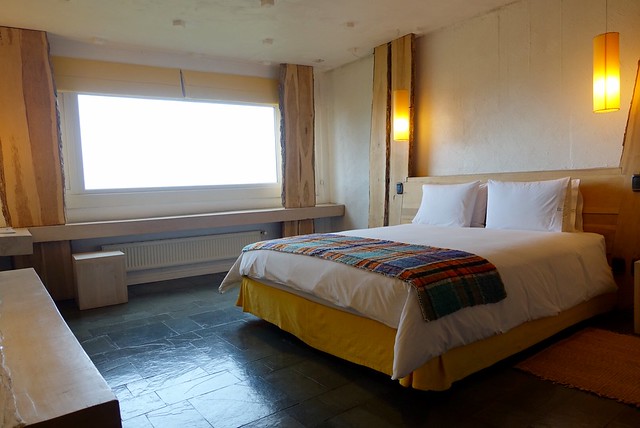 Ahhh, warmth. Clean sheets. And most importantly, a shower. We tidied up, decided that it was a hassle to go into town, and ate at the hotel restaurant. The meal was great--we both chose seafood, I had the scallop and salmon rolls, Chris had the king crab stew, and we started with guanaco carpaccio, a mixed seafood gratin, and something else. As we ate, we watched squall after squall blast down the open fjord to the northwest with 100kph/60mph winds, I'd guess, so strong that the walls of the restaurant would flex and low rumbles could be heard around the building. Glad we're not out there in that mess.

A tasty way to end the day, and we just crashed right after.

< To Refugio Cuernos Around Puerto Natales >